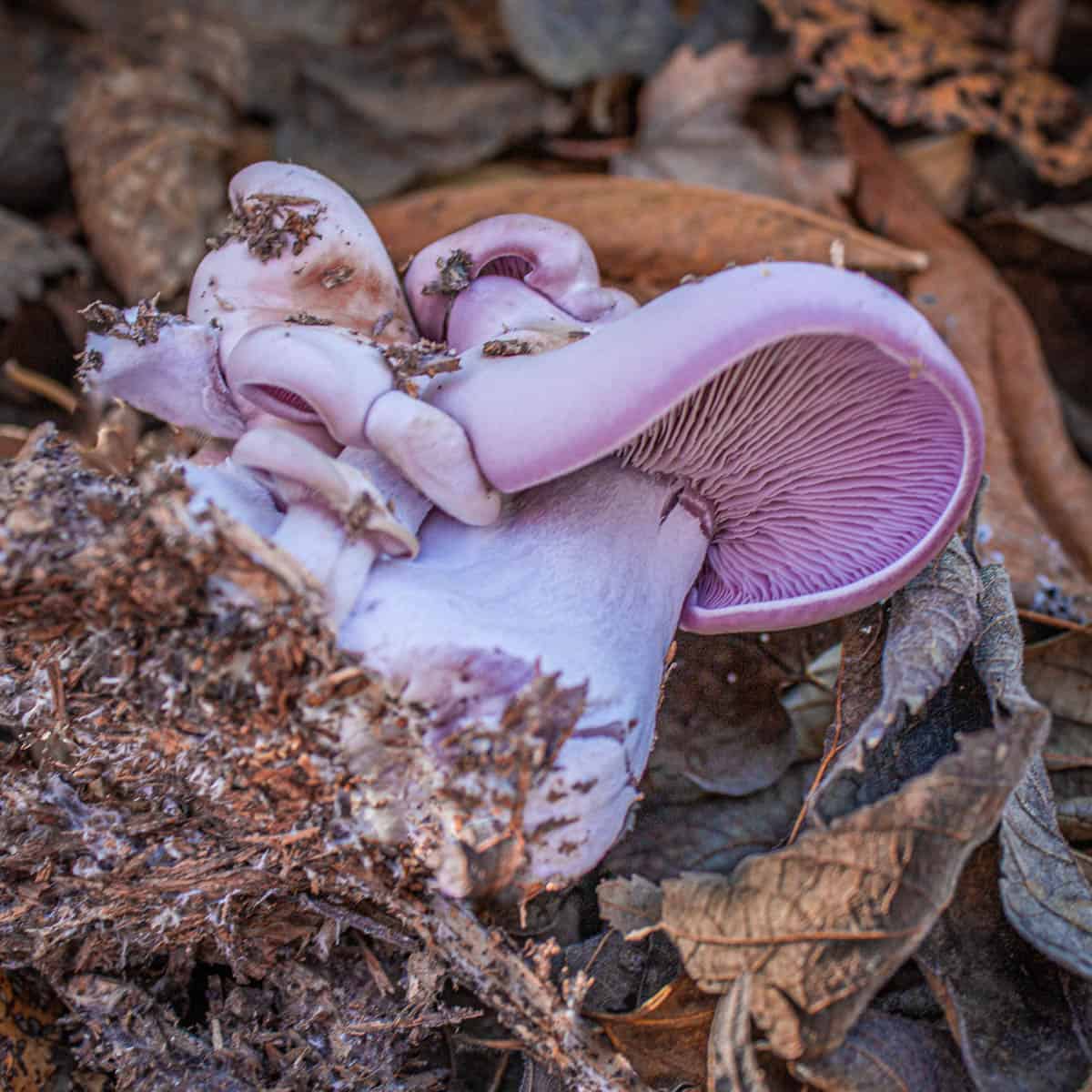 I think the first question I ever asked on a mushroom discussion forum was something to the tune of: how can I find blewits? Ever since I first read that purple mushrooms existed, and that I could eat them, I needed to find them. In hindsight, there were easier quarries, but who could blame me?

Look them up in any field guide and you’ll find pictures of elegant, deep purple mushrooms and comments that they smell like fruit, frozen orange juice, perfume, lilacs, etc. Sounds like a fun mushroom to hunt and eat right? Yes, but one that confused me for a couple years. 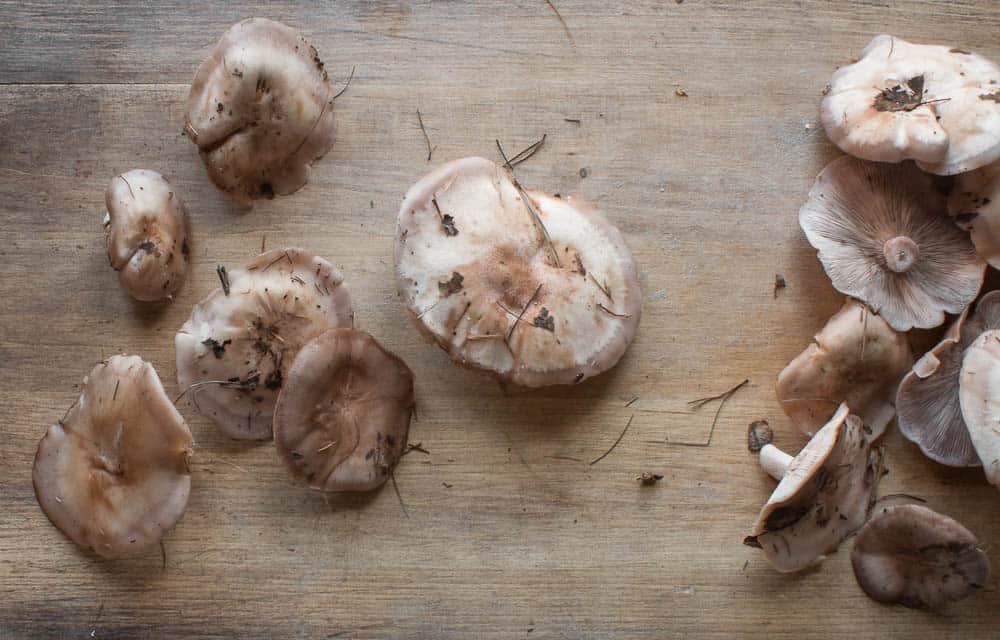 Blewits I picked 2 years ago under pine needles, some of the caps are nearly white. Its been hard for me to find the young, purple buttons in the woods.

Originally I put up a post on these a few years ago, but took it down because I felt the pictures weren’t thorough enough. I had picked what locally were known as blewits with other hunters on forays and by myself, but I just couldn’t find any that were the deep purple like the pictures of them I saw in guides and online.

I wanted picture perfect mushrooms like the books had, and I just couldn’t believe what I was picking could be the true Clitocybe nuda / blewit until I’d found the purple ones. 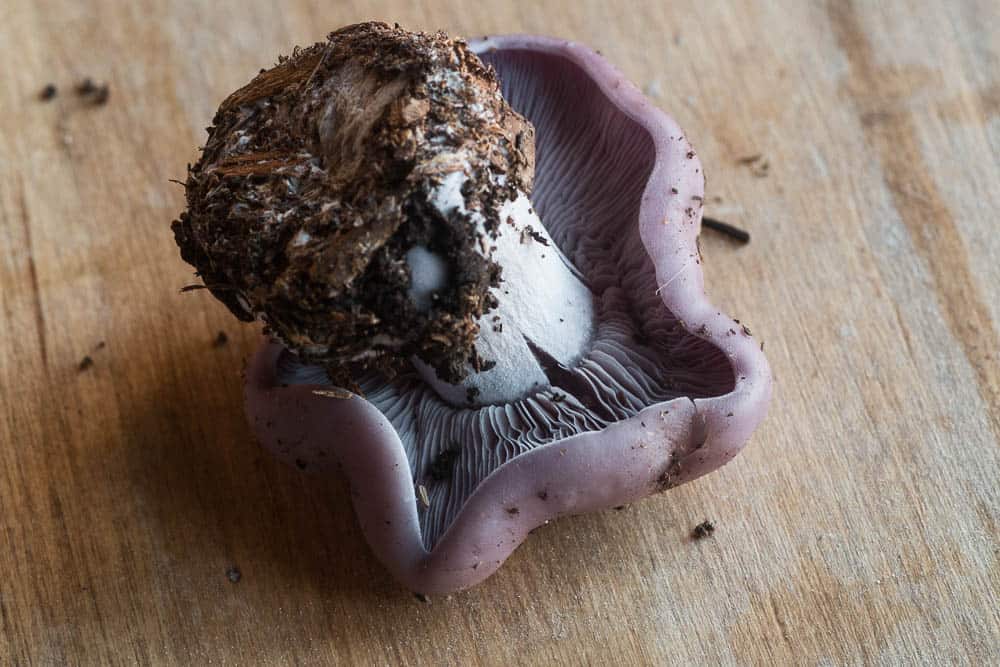 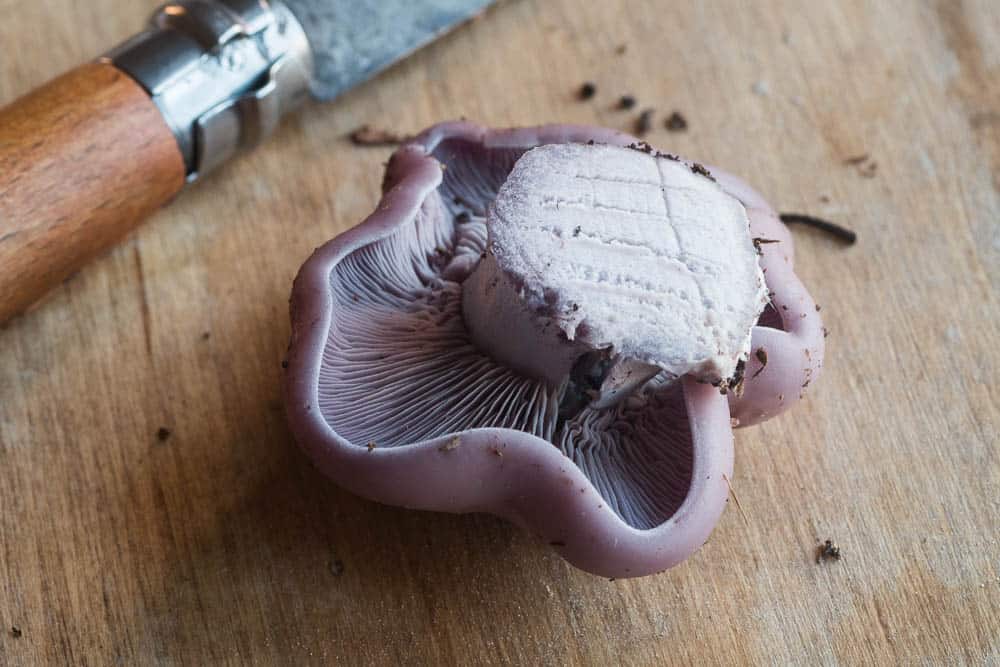 Younger mushrooms will have stems that cut clean=bug free.

Overthinking and poring over David Arora and other field guides even convinced me for a time I must be picking a cousin called Clitocybe brunneacephala. Try as I might, I just couldn’t find purple blewits. I would find some with a soft lilac color, but that would fade after a day in the fridge and then I would be questioning if I had the right mushroom, even though every other characteristic fit them to a T:

All that was missing was the purple color. What was I doing wrong? Do true blewits even grow in the Midwest? I was confused. I asked around and talked to some of my friends in the local Mycological Society, basically the jist I got was that they can have their color vary a bit. I was still confused. 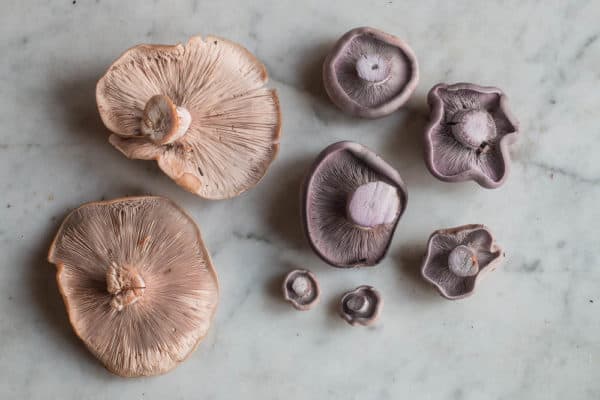 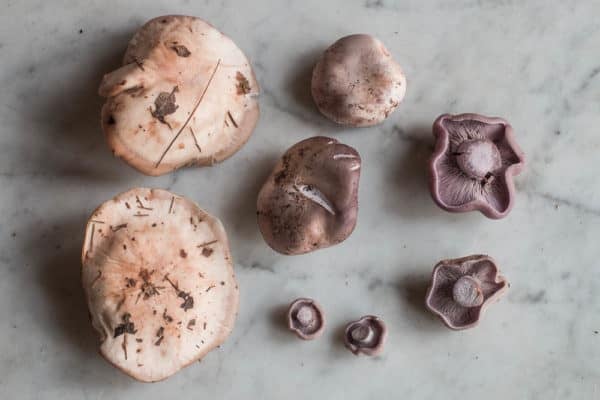 The next thing I did was try to teach myself by cooking some, like I did with the mushroom of St. George. I called a purveyor of mine and asked them to send me some cultivated blewits from France, and told them to make sure the Latin name of what they were sending was Clitocybe nuda, the true blewit. What showed up kind of looked like what I was expecting, but a little different, and It definitely didn’t have the slightly fruity smell I was used to with the blewits I picked.

Maybe it was the cultivation and the substrate it was grown on, more likely I think they were a cousin called the field blewit Clitocybe saeva, found in Europe (both species can be cultivated on mulch or debris) Either way, I knew I liked eating the ones I picked better. It wasn’t the first time I’ve had purveyors mess up the identity of mushrooms they’re selling, either. Back to square one. 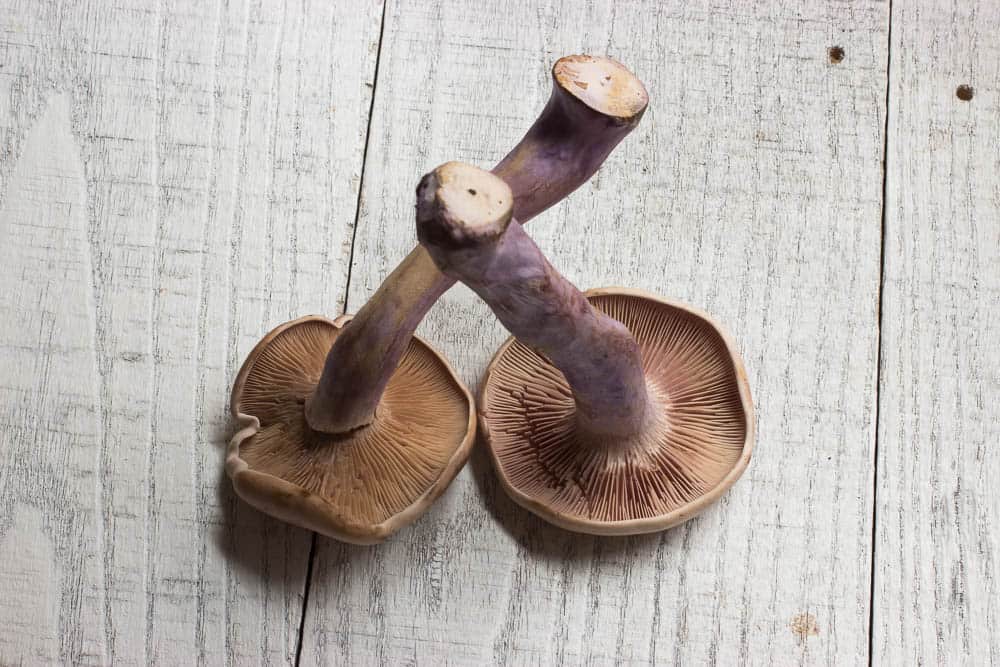 Last year, I finally cracked the code and had that aha moment. I remember reading  Hank Shaw’s article on them, then Micheal Kuo’s page and book on these, which are both great. What caught my attention was when Kuo said the color transformation of blewits is one of their distinguishing features. Finally, for some reason the pieces clicked and it finally hit home.

The variable color is one of their trademarks.

That doesn’t make things any easier when you’re picking things to eat in the woods, since as the color changes from beige, to tan, to brown, the list of potential nasty look alikes gets lot bigger.

Eventually I found blewits with the deep purple color I’d been craving too, the problem was just finding a large patch and hunting down the young ones. Even some young ones may be white-ish or tan, but there’s a much better chance of them being purple than if they’re mature. For the best chance at getting tiny, delicious buttons, find yourself a blewit patch and check it regularly during the season when you expect them in your area. After you pick a flush of mushrooms, keep going back, especially after rainfalls to harvest the young buttons, which will be the best eating, with less chance of any bug infestation. 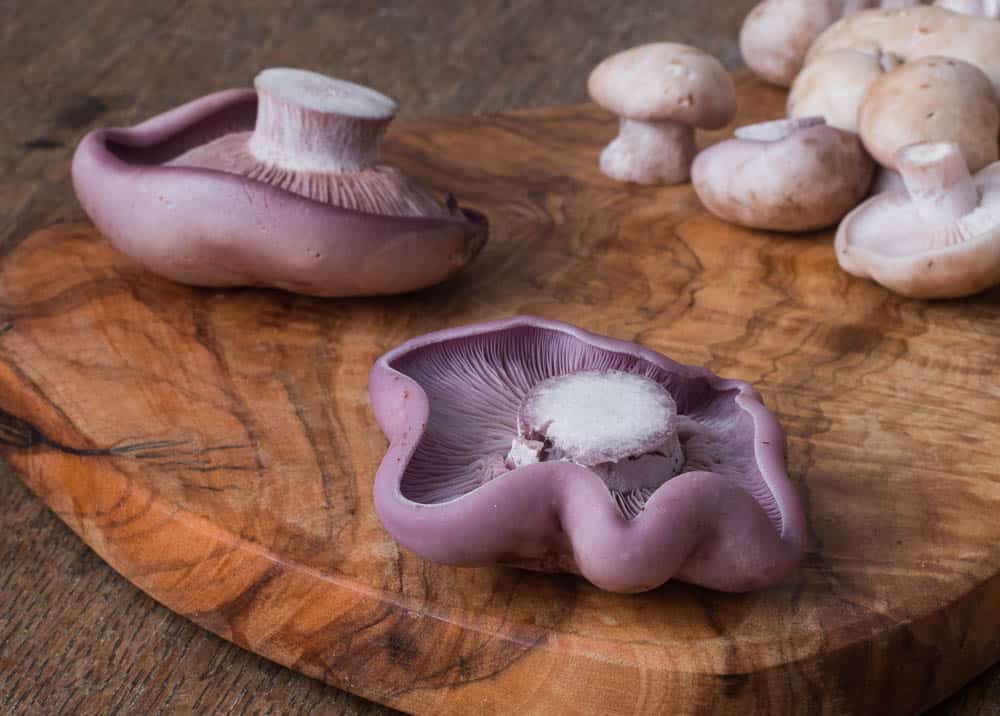 And more color variation. Here the more mature-ish mushrooms are purple, and the younger buttons in the back are light tan/white with a hint of lilac. Like I said, the variability of color is one of their trademarks.

How do I make sure I have real blewits?

Here’s my opinion. Take their color into consideration, but moreso, step back a bit and let your instincts guide you regarding not how they look, but how and where they’re growing. The biggest thing that helped me was to go around to places where I knew a particular type of organic “debris” was growing: wood chips. You don’t necessarily need to go to the woods for these.

In the past I tended to pick them in pine needles here and there and occasionally scattered in leaves, but they were always older, since those were the easiest to spot. Once I started checking spots with landscaping, it seemed like I couldn’t find a place with woodchips and not find them in quantity. It turned into hunting exercise, I’d go up to every area where I could see wood chips and play spot the blewit. They even turned up on my doorstep outside of my apartment. But, with all man-made habitats, make sure where you’re picking has not been treated with chemicals.

My advice is to turn your blewit hunting into a game, notice how they grow and what sort of debris they like to grow on in your area. Bring home mushrooms of different ages, shapes and color patterns, spore print them and don’t feel the need to eat them just because you found them. Keep going out and playing spot the blewit until you know them like an old friend, oh, and don’t forget to study your field guides. 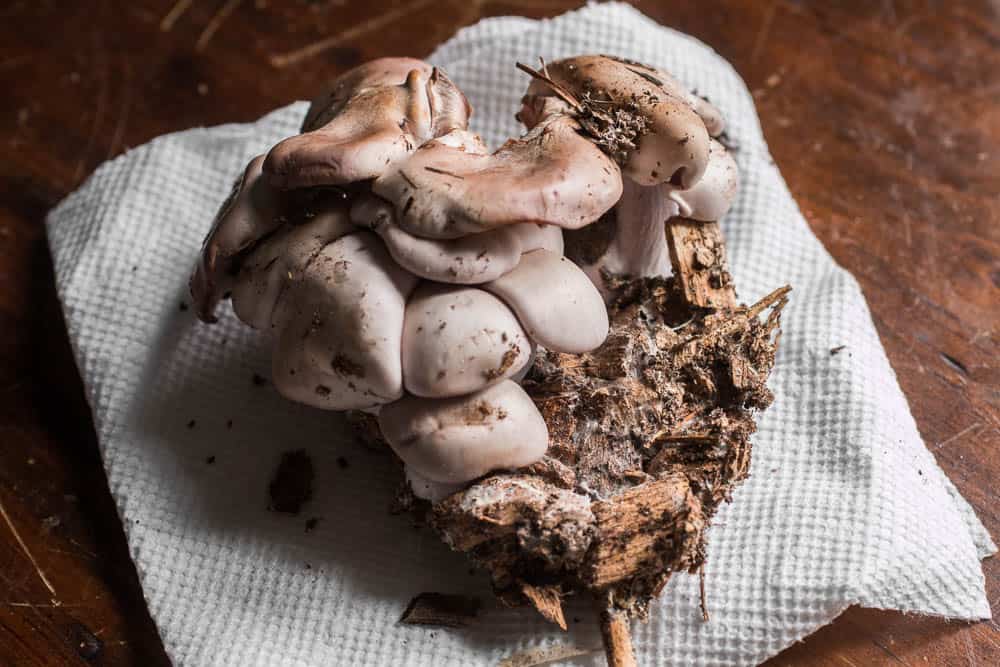 They love wood chips. Also note how much debris comes up when you harvest a clump of mushrooms, and how these caps are smushed from growing under pressure from the packed chips.

If they weren’t cool enough, you can grow blewits in your backyard, and you don’t need to be a mycologist. It’s a gamble and you’re basically hoping for volunteer mushrooms. Their love of organic debris means that you could basically take some old or buggy mushrooms, or just extras you’ve found, bury them in a compost heap or big piles of leaves in your backyard, and wait to see if they start to form a colony. In his book 100 edible mushrooms, Michael Kuo says they can even be grown on a pile of old newspapers. 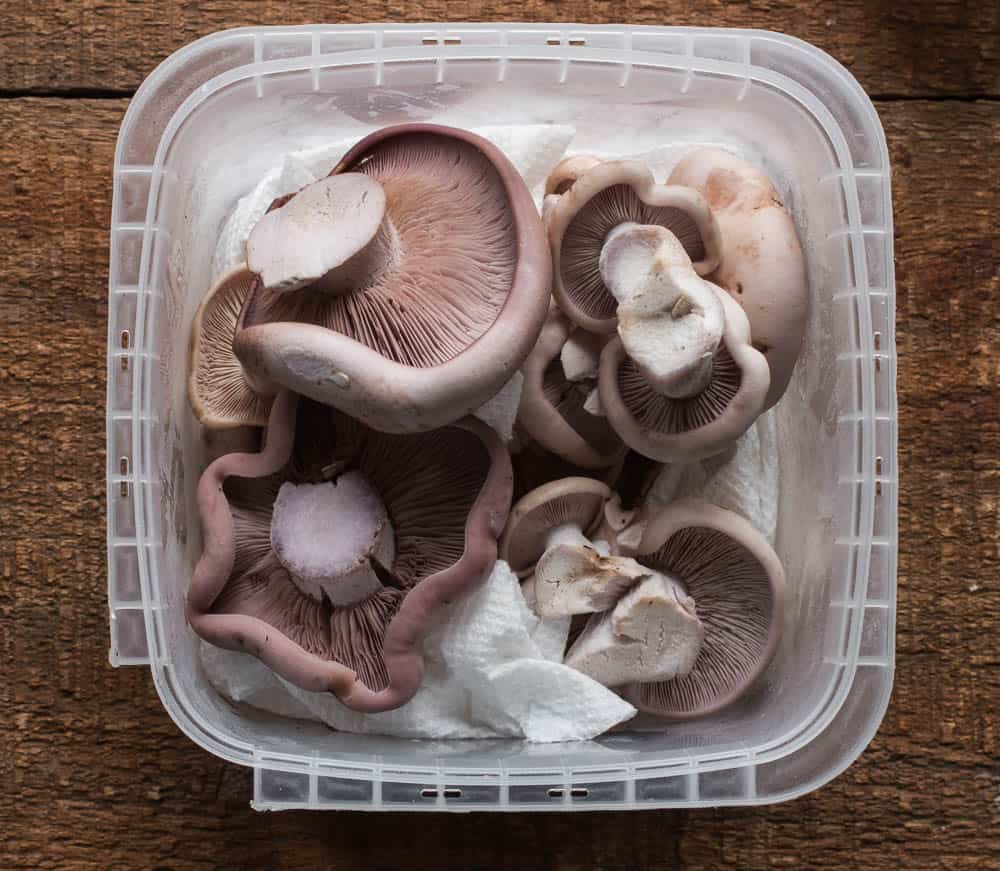 After just a day or two in the fridge, your blewits will lose that beautiful purple color.

I saved the best for last. I’ve read a number of places that people think blewits are a very strong flavored mushroom, to me it depends on the age, a chanterelle or a black trumpet are much stronger in flavor to me. I find them to be mild, delicate, subtle. Gentle flavors will do them justice, too much creativity and all you will taste is the texture of a mushroom, instead of the mushroom itself. Instead of reaching for the garlic right away, try a shallot.

The younger the mushrooms you can find, the better, and with blewits, more flavorful, especially cooked whole. Just like with chanterelles, buttons keep their fairy tale shape and squeaky texture, so I say resist the urge to chop them up unless they’re mature with flat caps, and even then I prefer to cut them into quarters or halves as opposed to mincing or slicing, unless I’m going to make duxelles. 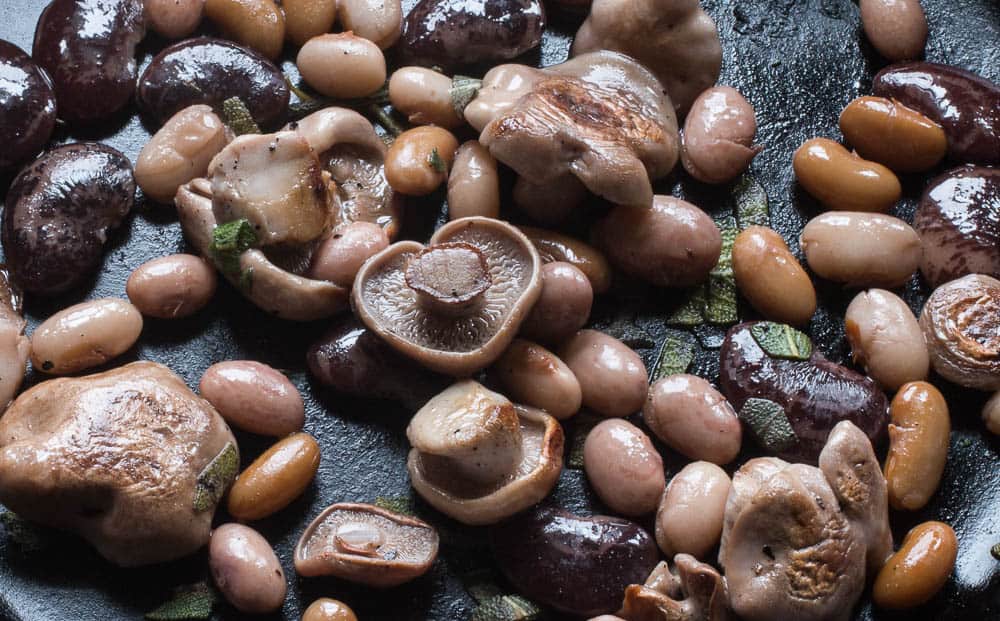 Keep little blewits whole to concentrate their flavor and show off their shape.