Tasting like the soul of cherry with an intense aroma of almond, traditional Siberian bird cherry cake (Черемуха) is made using dried wild cherry flour. It's the finest wild cherry recipe I've ever made, and probably my favorite dessert of all time, so saying every forager should try it once is an understatement.

Today I'll walk you through my version of the cake, with some background to help you understand why I love it so much.

First, the cherry. The bird in bird cherry cake comes from the name of a specific cherry: the bird cherry or Prunus padus (Черемуха). Zeroing in on the exact species used for the traditional Siberian dessert is a little confusing though.

Besides Prunus padus, there's also a cherry native to the same region called Prunus avium, which literally translates to bird cherry. I think both cherries could potentially be used to make the cake, but P. avium is said to be more bitter and P. padus I see mentioned repeatedly online and in print (one book that mentions it specifically is Magnus Nilsons Faviken.)

The magic of the cake is that it's made not from wheat flour, but from roughly half wheat flour and half dehydrated, ground, sifted wild cherries. If you caught my discussion Cherry Pits: A Traditional Almond Seasoning, you'll know that cherry stones are often seen as toxic or hazardous as they contain Amygdalin-a potentially dangerous glycoside that your body converts into cyanide.

You'll also know that at the very least, there's three heavily documented examples of different cultures around the world drying wild cherries whole and using them, shell fragments and all, as as a traditional food.

Drying and cooking denatures the amygdalin, making it safe to consume. My friend Linda Black Elk, a Native American ethnobotanist, also told me that she worked with a lab to determine exactly when the amygdalin starts to break down during the process of making chanpah (chokecherry patties).

Linda mentioned breaking open the shell and exposing the stones to air also begins the denaturization process, which would make sense as the almond aroma of ground, wild cherries quickly dissipates after grinding into flour, and I assume the aroma of almond and presence of amygdalin are linked.

Siberian bird cherry flour is simply dried, whole wild cherries that have been ground into a flour. It's known by Muscovites and expats, and, you can even buy it on Amazon, which should tell you something about it's popularity.

While commercially produced bird cherry flour can work, and I've tried it, the flavor is muted and much softer than if you grind your own.

Each cherry will give a slightly different character to the finished cake. Chokecherries keep a tiny bit of their astringency, black cherries I find to be the most well-rounded, but there's many that can be used. So far I've used pin cherries, black and chokecherries, sand cherries, as well as an ornamental I don't know the name of.

Making the flour is straight-forward, with the right equipment. Just toss your (clean) cherries into a dehydrator on high and forget about them for a couple days. Once the cherries are bone-dry, you grind what you need as fine as possible and sift once or twice before cooking. Dried cherries will keep in a pantry for years.

It is extremely important to use a fine mesh screen here. If you don't have a tamis sieve as pictured below and you want to make this, just buy one. I use this one.

After you're done sifting the cherry flour you'll have some bits of shells and pieces leftover. You can toss them, but there's a lot of flavor trapped in them so I like to keep my leftovers in a bag in the freezer.

The leftover shells and bits of cherry are wonderful infused in liquors and infusions, syrups, and places where you want the aroma but not the texture. Another important thing to know is that cherry flour loses it's aroma quickly, so I only grind what I need for a recipe.

The cake is easy. Whip some eggs with sugar, then add some dry ingredients and bake. As the cake is made with half flour, it has a more firm, chewy texture than most cakes, which also improves its shelf life.

Once the cake is made and cooled it's traditionally coated with a sour cream frosting. Heretical though it might be, I love cream cheese frosting and fruit, so I make a frosting tinted into pastel with my wild cherry gastrique or another fruit syrup.

Syrups made from different cherries will give different colors. Wild grape reduction makes a nice purple one-see below.

I've gotten a few messages about the shell fragments. To be very clear, yes, there will be tiny fragments of shell left in the cake. This is why the sifter you use is so important.

Very small pieces of shell are traditional, and add a texture to the cake that will grow on you. It's not unpleasant, sandy, or a danger to your pearly whites, as long as you have a fine mesh sifter.

This is more than just an incredible cake made from foraged cherries. I've used the same proportions here to make cakes with flour from different fruits and all of them are unique.

Wild plums (stones removed before drying) have a sour, tart edge. Aronia berries are mild tasting but have an intense color. Serviceberries are sweet with a milder almond taste than cherries.

Wild grapes make a tart, and deeply grapey version with slightly more seed particles. Use your imagination, but try the original first.

The best part of the cake is the conversation you'll have while guests eat it. After people have had a few bites, I like to reiterate that there's no almond extract in the cake. The din of pleasure sounds that follow make good cover for you to sneak another slice before it's gone. 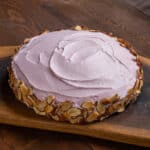