Come mid-to late August, green pumpkins will start to show, and one of the most interesting things I've made with them is green pumpkin mock-apple pie.

After reading about the tradition of cooking unripe squash in Nepal, I came across a passage in The Long Winter:

"Caroline, however did you manage to make a pie?" Pa exclaimed.
"What kind of pie is it?"
"Taste it and see!" Said Ma. She cut a piece and put it on his plate.
Pa cut off the point with his fork and put int in his mouth.
"Apple pie?" "Where in the world did you get apples?"
Carrie could keep still no longer. She almost shouted, "It's pumpkin! Ma made it of green pumpkin!"
Pa took another small bite and tasted carefully.
"I'd never have guessed it," He said. "Ma always could beat the nation cooking".

If you read between the lines a bit there, the "why" of "why on Earth would you eat a green pumpkin" makes more sense. Paring back the layers a bit, it made me think. Consider the following two examples.

Imagine you're growing squash in a garden as food and it's something you rely on. You don't have a lot of resources. A storm rolls through, or an animal breaks off a vine, and now your green squash is sitting on the ground and won't mature. Are you going to let that food rot into the ground, or would you try to salvage it?

Another example is more of a view that's contrary to American gardening logic. Mostly we see the fruits of plants as an end product. With pumpkins, the ripe, orange orb is what's held as the end goal, and the best part.

But from a subsistence standpoint, harvesting food here and there from a plant as it grows throughout the season instead of managing a glut at the end has some benefits, especially if you need food in the moment.

Green pumpkin pie is basically a mock-apple pie. And if they aren't briefed beforehand, some people might not be able to tell the difference. After peeling, the flesh of the pumpkin has a texture similar to zucchini, meaning it's mild and takes on flavors well. After they're peeled, the pumpkin pieces are mixed with sugar, spices and vinegar to mimic the taste of apples.

There's a few recipes out there for mock-apple pie made with unripe pumpkins. Let's just say the pictures and reviews aren't very convincing. I think one of the reasons for that is people expect it to be strange, or a novelty. It takes thought and effort to make zucchini work in a dessert, and for it to succeed, you have to treat it like you care.

The biggest hurdle with this recipe was the water. The first time I cooked a green pumpkin pie I followed the directions in the Little House Cookbook and baked up a sloppy, wet mess.

Most people, after having that kind of experience would write it off as something to never be made again. I think it's important to remember that recipes are an idea, not a mandate. If you like the idea of a recipe but not the outcome, more often than not you can tweak it to become what you wanted.

The missing part of the original recipe here is that squash and pumpkin contain more water than apples. Cooking the squash down a bit first to remove excess liquid fixes that, and from there all you do is put it into a pie crust and bake it like just like prepared pie filling.

Can you use squash?

Yes, absolutely. I've made this with green butternut squash as well and it worked just fine.

Is it worth it?

The big question. For me, absolutely. I love this recipe because it tastes good, and the novelty is fun, but it's also a teaching example rooted in historical foodways. Everyone with a garden seems to have squash and pumpkins coming out of their ears in the summer, and just knowing that they're even edible unripe (and not poisonous) is a new thing for many people.

Lastly, unripe squash and pumpkins are good for savory dishes too. If you don't feel like making a pie, they make a good soup vegetable, or they can be cooked any way you would zucchini. Whether you try your hand at the pie or not, I hope you can take away a new appreciation for squash, pumpkins and gourds. 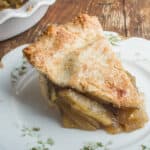 How to Cook a Green Pumpkin