A venison tasso recipe may not exactly be a traditional piece of charcuterie, but, if you like spicy smoked ham, you'll love it.

If you're not familiar (it's kind of an obscure ham) tasso is a smoked Creole ham that typically has a spicy rub of paprika and cayenne, among a bunch of other things.

When I made more traditional tasso at my first restaurant, I would always use what's called the "eye" of the pork shoulder, a perfectly cylindrical piece of meat also used to make coppa ham.

Tasso is awesome made with pork shoulder, but nicely marbled cuts of any well used muscle from many animals can make a great version. All you really need to know is the basic spice rub (that you can tweak, as I often do) and a simple method. Also, if you like things like this, you also need to dry my venison bacon, and if you haven't tried that, I would recommend you do that first before making this.

Cuts of venison I use

There's more than one way to do this, but here's my method. First, I rub the meat with a mix of curing salt, kosher salt, and maple sugar (although originally I was taught to brush the meat with honey) then I vacuum seal it.

After it's seasoned and has rested for 2 days, I coat it with the spice rub, then smoke it low and slow at first for 1.5 hours, finishing it in the oven wrapped in parchment to allow it to gently steam until it's fork-tender.

Other meats can be cooked completely on the smoker, but venison is lean and can dry out a bit so I like to finish it in the oven. You can probably get away with only doing it on the smoker, and I have, but If you've never attempted something like this before I encourage you to use my dual-cooking method here to hedge your bet.

The finished ham is smoky, spicy, and rich. Typically I dice it into small cubes before cooking to remove some of the fat, as you would bacon. It'll be delicious in your favorite creole recipe, tossed with some roasted potatoes, crisped up and added to gumbo or some fried greens.

Venison hams and other things using the breast and other fatty cuts I always serve hot, since some people, myself included, find cool venison fat a little too rich.

What about the fat?

Most hunters I know of are terrified of venison fat. If you're one of those people, don't worry. Curing and smoking changes the structure of the fat a bit, but it's also important to know how I cook with the finished ham.

After smoking and chilling to firm, the ham is cut into pieces and cooked crisp like you would bacon, although I'm more gentle on it during rendering as I don't want it to become firm nuggets, which could be dry.

Brown it lightly, discard the fat, and add to a recipe in which the ham will be consumed warm. Soups and stews, especially Creole ones, are excellent places to use it. 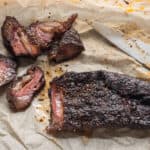 Smoking and finishing in the oven