Venison bacon is a thing, a smoky, delicious thing. But I don't see many people making it.

Do a google search for how to make venison or deer bacon and what you'll find is definitely not bacon. Most venison bacon recipes are basically a sort of spiced meat loaf made with pork. Calling something like that bacon, to me, is a joke. Ground meat is not bacon. Period.

I think the reason people don't make more venison bacon is probably that a lot of hunters grind the cuts that I describe here, but also because people are scared of it being gamey, or fatty. We'll get to that.

Whole animals came in the restaurants I worked at. With every delivery, we'd stockpile certain cuts. Here and there, I'd get to put goat, lamb, and venison bacon on the menu, "bacons" I'd never heard of before. They were all delicious, in some ways even better than pork for certain preparations for the richer flavor, and lighter fat content. Eventually, I got to take part in the curing and smoking process, and you bet I took notes.

Before I get into the recipe, I've been getting a few specific comments on this, so, let me address a few things.

Typically bacon is made from pork belly, and it is good stuff. Unfortunately, small ruminants like lamb, venison and goat have a line of sinew that runs through their belly that won't cook down and get tender, no matter how long you cook it for. You can cut around that sinew, but it will be a pain in the ass--trust me.

Cuts to use for venison bacon (Breast is best)

Breast is best. By far, my favorite cut to use for venison bacon is breast, as is illustrated in the picture of cutting it off the carcass below. You can use a lot of different parts of your deer to make venison bacon, but the breast has a really nice fat/meat ratio, without having too much meat that would be dry, and too much fat that would be, well, too fatty.

Below shows my preferred cut coming off of the breast, with a little shoulder and neck meat. I trim the cut to be rectangular, just like a pork belly. Above shows the finished rectangular piece of venison breast, which I'll give a light trim before curing and smoking.

What about the fat/tallow?

This is everyone's biggest fear. People think the fat will be like eating deer flavored chapstick, or it will be generally chalky, greasy, and overall just unpleasant, etc.

Where I live in Minnesota, it's illegal to sell wild game in restaurants, so the deer we would cook with in restaurants were typically farmed cervena, and, if you've had farmed venison, you know it's nearly more mild than corn fed beef, blindfolded, you can't tell the difference. So, gamey" meat can be a confusing misnomer, and the diet has a lot to do with it.

An animal's diet has a lot to do with the taste of their fat. Deer that ate wild sage my Grandfather used to shoot in Montana will probably have stronger tasting fat. Deer that eat from Midwest food plots, likely including some corn, acorn and bitternut hickories (like the venison yearling from Iowa pictured here) will be mild, and pleasant tasting.

As I mentioned before, farm-raised venison meat, while usually darker in color, is generally near indistinguishable in flavor from beef as it is so mild. Research the diet of your deer or whatever other animal, as well as the landscape, and it will tell you a lot.

As far as the texture, or "waxiness" people describe, yes, venison fat and tallow is very similar to beef fat in that the fat is heavy. Lamb fat is similar, but I actually prefer it to beef fat, as do people in the Middle East who've developed and raised sheep with fat tails as lard animals for hundreds of years, if not longer. Google fat tailed sheep and be prepared for laughs.

After rendering, yes, venison tallow is little waxy, and has a higher melting point, meaning it will firm up on a plate, or in your mouth. This can be a problem, say, if you're making venison sausage with 100% venison fat, but less so with bacon, and it's all about the cure, how much fat you leave on, and how it's cooked, in my mind.

The magic of sugar

A good bacon cure uses sugar, or in the case of this recipe, maple sugar (you can sub brown sugar). Sugar especially, works magic on fat. After curing, then smoking and slow cooking, a lot of the fat renders out, and creates drippings that you can put a tray under the bacon in the smoker and catch for seasoning things, like sauces and soups.

The sugar changes the texture of the fat a bit too, and makes it more appealing, in my mind, it's a bit hard to describe, but it gets candied a bit, translucent, and, it just tastes better.

Lastly, bacon is made to be cooked/rendered a bit, which....removes the fat. If you don't want the rendered fat in what your making, drain it off, and don't eat it. It's that simple. Collect the rendered tallow in a jar for your bird feeders, and just eat the cooked bacon, problem solved.

Why I usually dice venison bacon

Originally, smoked meat was a preservation method, and a breakfast with slices of bacon was not exactly a thing. I don't cut venison bacon into slices, I dice it, for a couple reasons.

First, venison, lamb and goat bacon, are very similar, depending what the cut is, can have a covering of a thin line of connective tissue that can be slightly tough to chew. Secondly, cutting the bacon into dice creates more surface area allowing you to render out more of the fat, faster. See a video I made on lamb, where you could substitute venison at the bottom of this post.

Now to the cure. I use a basic bacon cure I've developed over the years, that I rarely use the same way twice, as far as seasonings. What never changes is the ratio of pink curing salt (prague powder) to salt and sugar. For bacon, I like warm spices. I never use herbs like rosemary, or even dried herbs, as I think they're unnecessary, and come off the bacon as it cooks, burning in the pan.

What I do use are warm spices. You could get by with the simple blend I outline below, or you could use that jar of pumpkin pie spice in the cabinet, as long as it's fresh. Lately I've been in love with a Sephardic spice blend called baharat for my smoking and curing, but French quatre epice is good too.

One thing is for certain though: Grinding your spices fresh for rubs makes a huge difference, and if you reach for that ground nutmeg from 1998, your bacon will taste like it was seasoned with sawdust, from 1998.

Note: Since it’s hard to make small amounts of cure, the recipe for the cure will make enough for 3 batches of bacon, it can be stored for 3-4 months in the refrigerator, in the freezer, or 1 month at room temperature without losing aroma.

You can scale the recipe as needed. Once you get comfortable seasoning with the cure, you can use it for all sorts of things, it's also good with smoked shanks and hocks. 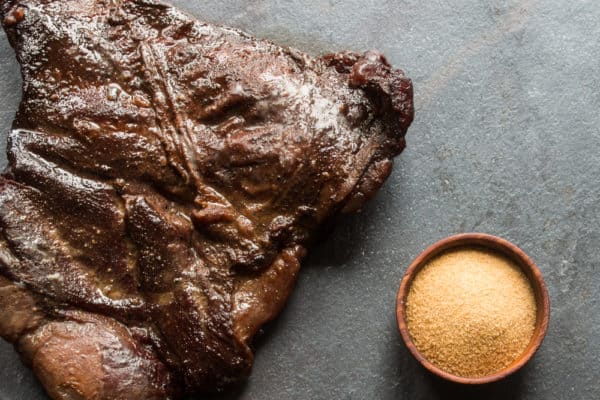 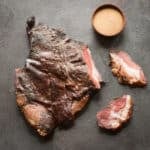