Barrel cactus fruit, also known as muppets you can eat, or the Bert and Ernie of desert edibles.

I’ve traveled to Arizona to see my grandparents just about every other year since I was a child. I always thought the concrete jungle of towns in the desert, and the different terrain was interesting-much different from Minnesota where I grew up, but it was more of just a funny-looking landscape as opposed to something I’d want to study. But now, I try to find edible “souveniers” on my trips, wherever I go, and I’m always on the lookout for new things to cook with. 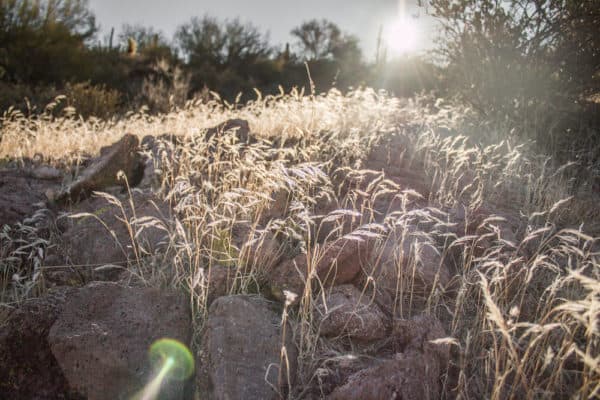 The Arizona desert is one of my favorite places to hike with my father.

I usually go in the winter, say January or February, and, it’s taken a few years to get up to speed. One year I tried to pick cholla buds, picked the fruit by accident, and got them way too green. Let me tell you, I was picking glochids out of my fingers for a week after that foraging crucible, and, unfortunately with the time frame I usually travel in, I probably won’t be getting any cholla buds any time soon. I learn more every year though, and 2019 was the best yet, because of the barrel cactus fruit.

My grandparents had an idea to take a wild foods walk at a botanical garden with a local guide named Felicia, I was excited, as hands-on experience with locals knowledgeable about the terrain is speed learning compared walking around with a field guide. 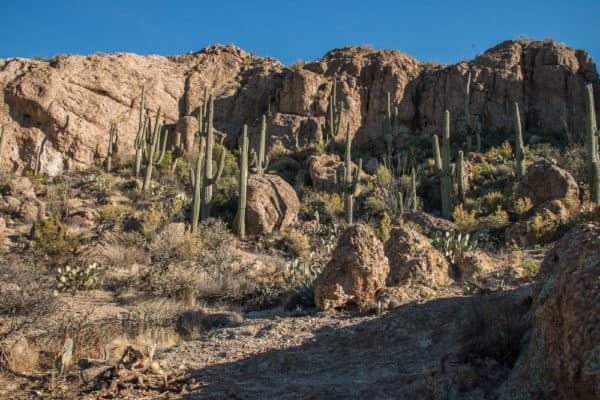 There are a lot of cacti here, and they are all technically food plants.

The best new thing I learned, hands-down, from Felicia were the barrel cactus fruit, which look a bit like mini-pinneaples. The fruits of barrel and other cactus have been used as food for eons, along with other parts, but the only edible cactus fruit I knew were the purple prickly pear sold in sugary jam in gift shops, and more recently the more obscure cholla buds. Someday, cholla, someday you’ll be mine. 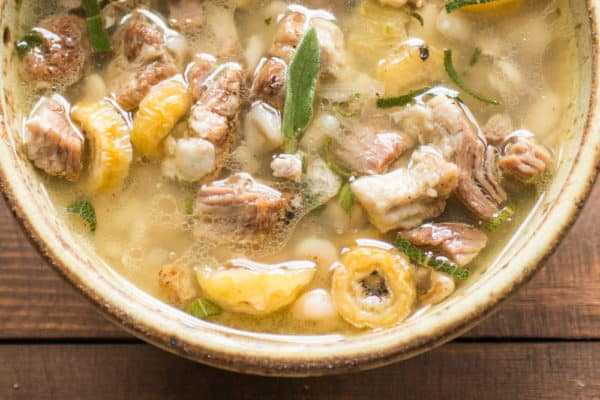 Dried cactus fruit were ridiculously good in soup and stews.

The barrel cactus has long, curved spines on the body but the fruit are, completely, 100%, spine-free. That means no gloves, no tongs, no burning to remove nasty glochids, nothing but pure, sweet, endorphine-rich free food picking to sate your inner caveman/cavewoman. 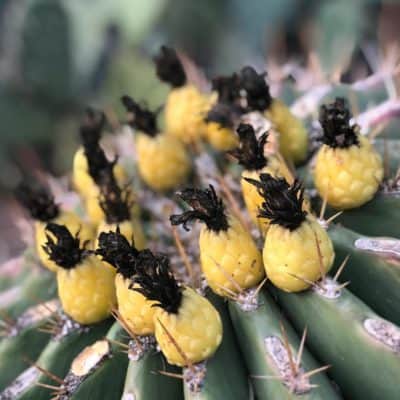 Barrel cactus fruit at a decent stage for picking.  There’s no glochids or spines, just grab’n’go.

Looking in areas supplemented with water

The only tricky part for me was actually finding some cactus fruit in a place I could harvest them. At the botanical garden in January, the wee-pinneaple cactus fruit were everywhere. Excited after our walk at the garden, we went out hiking in the Superstition mountains the next day, only to get skunked, with zero cactus fruit.

Afterwords, at my grandparents house, wouldn’t you know it, the neighbor’s yard had a barrel cactus filled with the damn things. My grandparents called the neighbors, and, giddy like a kid with a new toy, I got to go over and pick some. Later that evening we may have skimmed a few from other houses, under the cover of darkness to please the foraging gods. Needless to say, at least where I was, it seemed to me that irrigated places (lawns, etc) seem to fruit earlier than the wild places that wait for rain, but that’s speculation on my part. 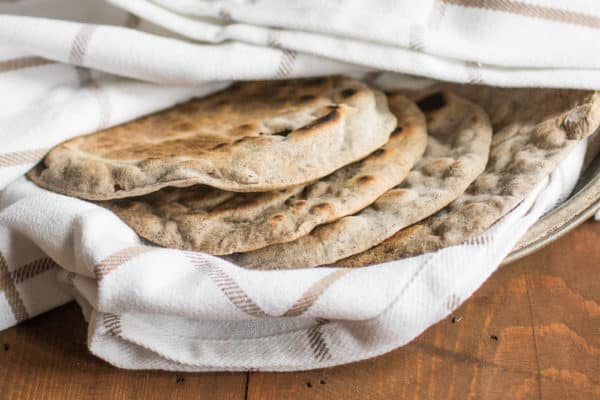 The seeds of barrel cactus can be toasted and ground into a meal. These are flint corn and cactus seed flatbread, for dipping in soup or broth, or making tacos.

The buds are really firm, solid things, and they took a luggage ride in a paper bag like champions. When I got home, I cleaned them, taking a little inspiration from my conversation with Felicia, who said she dried them and sometimes ground the inner seeds into a meal. Like other cactus parts i.e. paddles, fruit, the barrel cactus fruit are slimy, mucilagenous creatures, and will go toe-to-toe with Japanese Knotweed for most gooey thing I’ve picked. 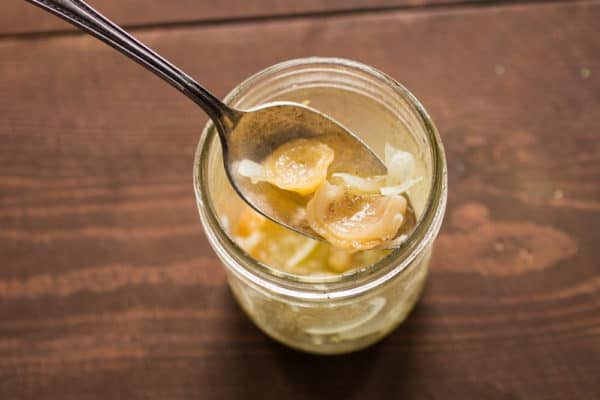 After drying, another thing I did was cook and marinate the cactus fruit for a taco relish. It was good, but nowhere near the desert stew.

Cooked fresh, that mucilagenous goo will transfer strongly to water, say, if cooked in soup, and, I don’t care for that, much better to grill them if you want to try them fresh, but know that fresh they’re sour, as in more sour than sorrel. Felicia’s advice on drying them was genius, since dehydrating, as well as being a safegaurd against a lot of gastro-intestinal distress issues with eating new things, can change the structure of mucilage and tame it’s qualities, and the same goes for Japanese Knotweed, while we’re at it, although I don’t care for it much. 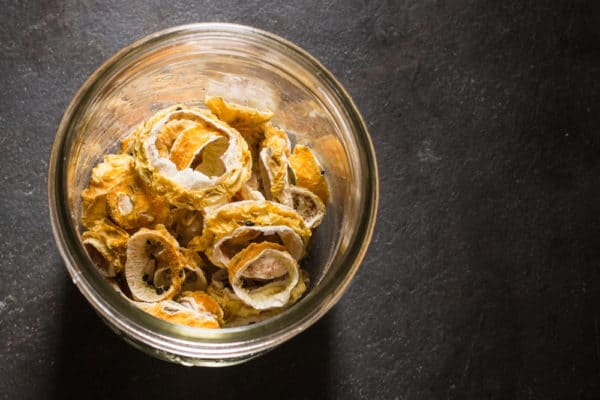 Sliced, and seeds removed, the cactus fruit dry easily, and the mucilage loses it’s potency. In about twenty minutes of harvesting I got 3 pint jars of these dried–a good yield.

The fruit itself won’t yield as much as it looks like, since they little pinneaples are filled with black seeds, but, trust me, these things are worth going out to get. I cut some of mine into quarters, and some into rings, before drying and, depending on what you do, either way could work. Once they’re dried they’ll last a very long time in a jar. Some seeds will stick to the cut fruit, but are easily shaken/winnowed after drying and combined with the rest of the seeds. 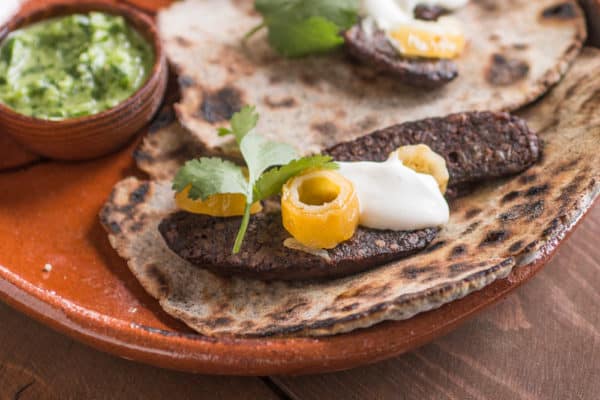 After drying, cooking and marinating, the buds made a nice topping for blood sausage tacos made with toasted cactus seed.

As far as cooking goes, there are a few recipes online, but most are just jams packed with a bunch of sugar, and personally I think that’s a lazy method that will make anything palatable. The best way I found to use these was in soup, or stew. To cook from dried, just simmer them away in your soup. They take a while to soften, but eventually they turn into little tart bites that gently flavor a cooking liquid, a bit like avgolemono soup. 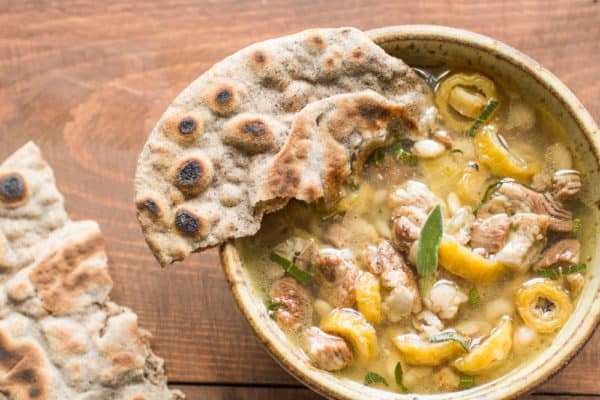 An all-desert themed stew I made with my dried cactus buds was out of this world good. The fruit adds a tart flavor to broth. You dip a sourdough flatbread made with cactus seeds into the broth as you eat.

The best thing I made was a simple desert-inspired soup pictured above with goat, tepary beans, wood ash hominy, dried cactus fruit, and a sourdough flatbread made with the seeds you dip into the broth as you eat. The cactus fruit were the star of the show, and they are hands-down the best desert edible I’ve eaten to date. 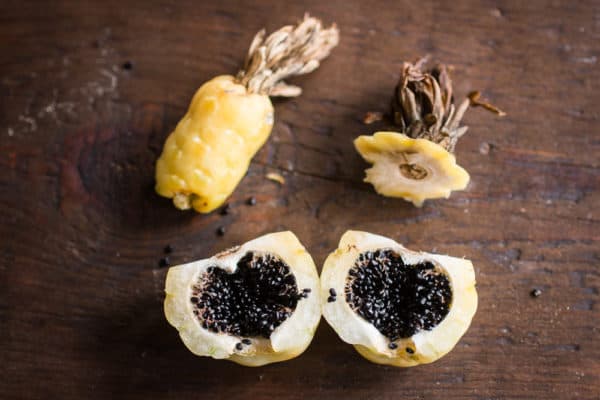 Sliced fruits are basically hollow after the seeds are removed. I discard the pinneaple tops.

I scraped mine out of the fruit, dried them, and forgot about them for a while. I wasn’t expecting much, but as the seeds make up roughly 40% or so of the volume of the cactus fruit, I knew I should try doing something with them. Fresh they’re fine as a sprinkle or garnish. Dried and eaten raw, they’re gritty and bland tasting. Felicia made a sweet chutney with green tomatoes and fresh saguaro cactus seeds that was excellent.

Toasting the seeds was a gold mine, and they gave off a rich, nutty aroma, almost like a roasted root, or coffee substitute, almost. I’d describe them as half grain/half aromatic for cooking purposes, and they flavored a flatbread made with cornmeal I made really well, just make sure to grind the meal as fine as possible.

As I said before, soups, broths, and stews are where these will shine the best. But as long as theyre rehydrated and cooked until tender, you can do all kinds of stuff with them. Here’s a few things I did, or have in the chamber. If you’ve worked with these,