Black trumpet potato puree (think dried-mushrooms pureed into mashed potatoes) came from a dish I'd heard about when I was moonlighting as the stylist on Lenny Russo's cookbook. It's one of the more interesting wild mushroom recipes I've done.

Over the course of the eight month project, photographer Tom Thulen and I would work off a list of dishes from different sections each week, chosen by the powers that be, also known as the publisher. Mushroom potato puree (maybe because it comes in edible shades of brown and grey?) wasn't chosen.

I'd made a few of the dishes in the manuscript for restaurant service before we starting working on the book, but I'd never made mushroom flavored taters, so I made a point to, sometime (6 years later).

The original recipe called for mushroom duxelles, but I thought that making a really strong one with a thick puree of dried wild mushrooms could be really good, especially strong ones like black trumpets that love dairy, butter, and all the creamy smooth things.

I ended up marrying two recipes here: Chef Russo's recipe, and the famous pommes de terre Robuchon, the latter of which I was taught how make to from a chef de partie who worked at Robuchon in Vegas.

Quick aside, one secret to Chef Robuchon's world-famous potatoes is that they're made from frozen French potato pearls, which ensures a consistent product year round that tastes the same, at the same time, in Vegas as it does in Paris.

To make the mushroom-lovers version here, you infuse the dried wild mushrooms into a bunch of cream and butter, puree it silky smooth, then use it to flavor some freshly cooked and rice potatoes.

It's ultra rich and filled with black trumpet flavor. It'll be good anywhere you'd have mashed potatoes, but especially with meat, preferably roasted. It doesn't include anywhere near the amount of butter real Robuchon potatoes call for, but it's rich enough for me.

This is really straightforward, but, you must use a ricer here. A foodmill will ruin a puree of potatoes with it's circular motion, activating the potato starch and making them feel like glue in your mouth.

Feel free to use your favorite dried wild mushrooms here. Dried chanterelles are a good alternative for black trumpets and keep the light color of the potatoes. Other strongly flavored mushrooms like porcini would be good too. 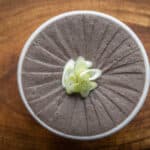