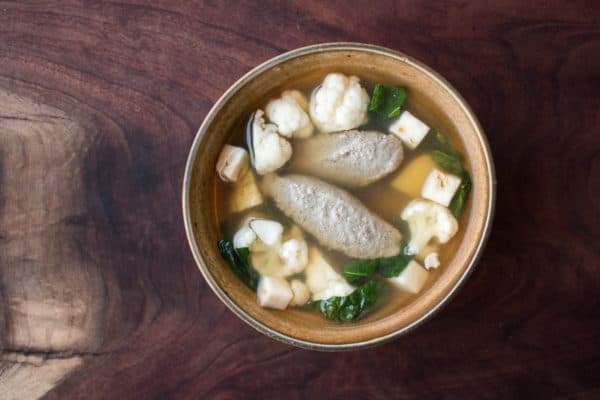 I'm always looking out for interesting ways to serve liver to people that don't think they like offal, and these traditional German dumplings are a great way to do that. Liver and kidneys, especially from ruminants like deer, lamb and goat, are some of the hardest to get people to like, and alot of times cooking with them kinda means finding a way to hide them a bit, finesse them, or otherwise dress them up. These smokey, bacon-y braunschweiger dumplings are a study in different ways I might do that. 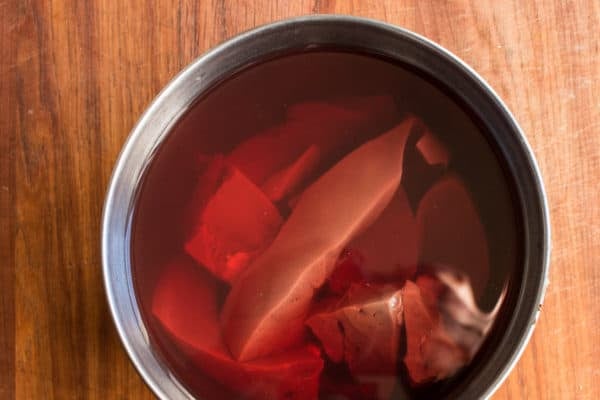 Soaking liver in water. Instead of the typical milk soak, I leech the liver in a couple changes of water.

Calming the liver is basically a 3-pronged process. First, the liver is soaked. Typically you'll see liver being purged in milk, which is good too, but when the livers are from venison, I'll probably soak them in a few washes of water, similar to how I leech the tannins from acorns. The more washes you do, the more flavor will get washed away--for better or for worse.

The second part of the process is cutting the mass of the liver with another submissive ingredient, in this case, breadcrumbs. Flour can work, but, if overworked will toughen. Breadcrumbs though, already having some of their properties being denatured from cooking, won't form gluten strands, which is one of the reasons they're traditionally added. 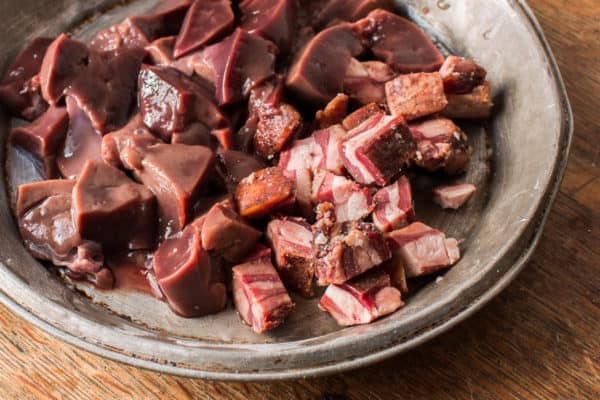 Cutting the soaked/leeched liver with bacon goes a long way to help the flavor.

Lastly, smoke. Anyone who's eaten liver can also tell you that it has an affinity for smoked things, especially bacon. Mmmm, bacon--especially my homemade venison bacon. If you're not aware, see my original post on venison bacon here. Of course, you can use good old pork bacon, but, it won't be the same. Venison bacon is fatty, and, that's a good thing, as the fat helps the dumplings firm up after adding the breadcrumbs. Pork bacon is also not as easy to puree as my homemade bacon, so make sure to pulse it first in the food processor to really break it up--preferably half frozen if you substitute it. 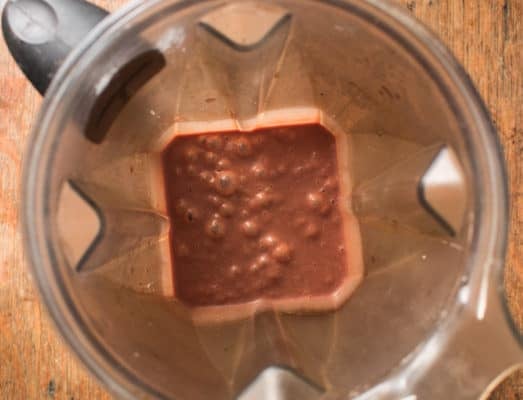 Milkshake anyone? In a perfect world you want a smooth puree of liver and bacon.

After you make the puree of liver, you just add some breadcrumbs, season it up a bit, and let the batter firm in the fridge for a while. Traditionally from there, you'd poach the dumplings directly in some good broth, and serving them could be as simple as that. You can do that, and it's ok, but I like to blanch them in salted water and then add them to another soup, like the one at the top of this post--a soup of celery root, kale, cauliflower and potatoes. 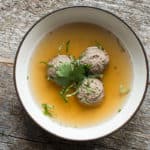 You can serve the dumplings in whatever soup you want. Pictured is a simple bone broth with vegetables you might find in packets of European soup mix: celery root, potato, kale, leek, and cauliflower.
« Smoked Rocky Mountain Oysters
Smoked Venison Shanks »