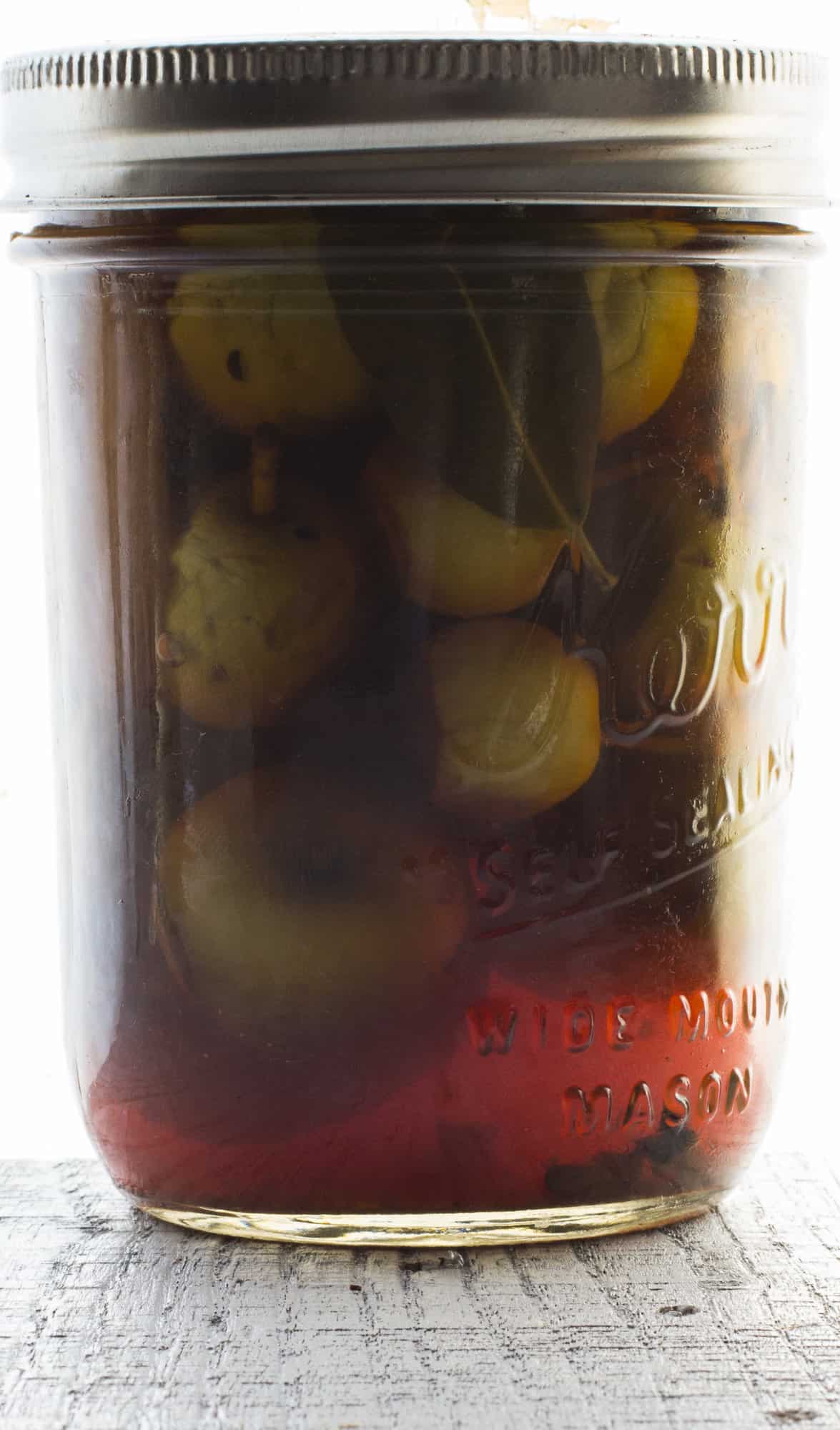 I had a nice hike the other day casually looking for chanterelles and boletes. It was a little windy, which is great since it'll keep the bugs at bay. I went over to one of my  patches, picked what I could, and headed back to the car-chanterelles haven't seemed to explode like I'd hoped this year. On the way back, there was a big gust of wind and I heard a little "plop" behind me. When I turned around, I saw a crab apple tree surrounded by a bunch of it's little green fruit.

I knew they weren't ripe yet, but I picked them anyway, I'll tell you why.

I had a bit of a paradigm shift regarding the correct stage to eat fruits and vegetables a while back. Suffice to say that even if something isn't "ripe", it may still have useful properties in the kitchen. Some great examples are the green, unripe strawberries Rene Redzepi has made popular at NOMA, Italian Nocino made from unripe black walnuts, and the old British technique of using green black walnuts to make pickles. (Hank Shaw has a super fun recipe for black walnut pickles here).

An even older use of unripe fruit is a technique the ancient Romans used: verjus. Verjus is the juice of grapes harvested before they're ripe. It's used like vinegar, since it's sharp, and acidic. I like using vejus for it's mild flavor, and also for the fact that it can be used to season food for people that have an allergy to yeast.

Our little crab apples here are in the same vein. At first glance, it might seem tedious to gather a whole bunch of little, astringent apples, but there are a couple cool reasons to do so:

1. Wild apples are notorious for being infested with worms. You will be hard pressed to find a young apple with bugs in it.

2. Mature apples have seeds inside that you will have to deal with, either by making them into puree, and straining, or halving and coring. Young crab apples haven't developed their seeds, which means that the entire thing can be eaten,  the little stems are nature's utensil. 🙂

After I brought the apples home, I was wondering what I could do with them. I remembered stumbling across a recipe in our old black book at work for pickled crabapples simmered with brown sugar and spices. Yum. 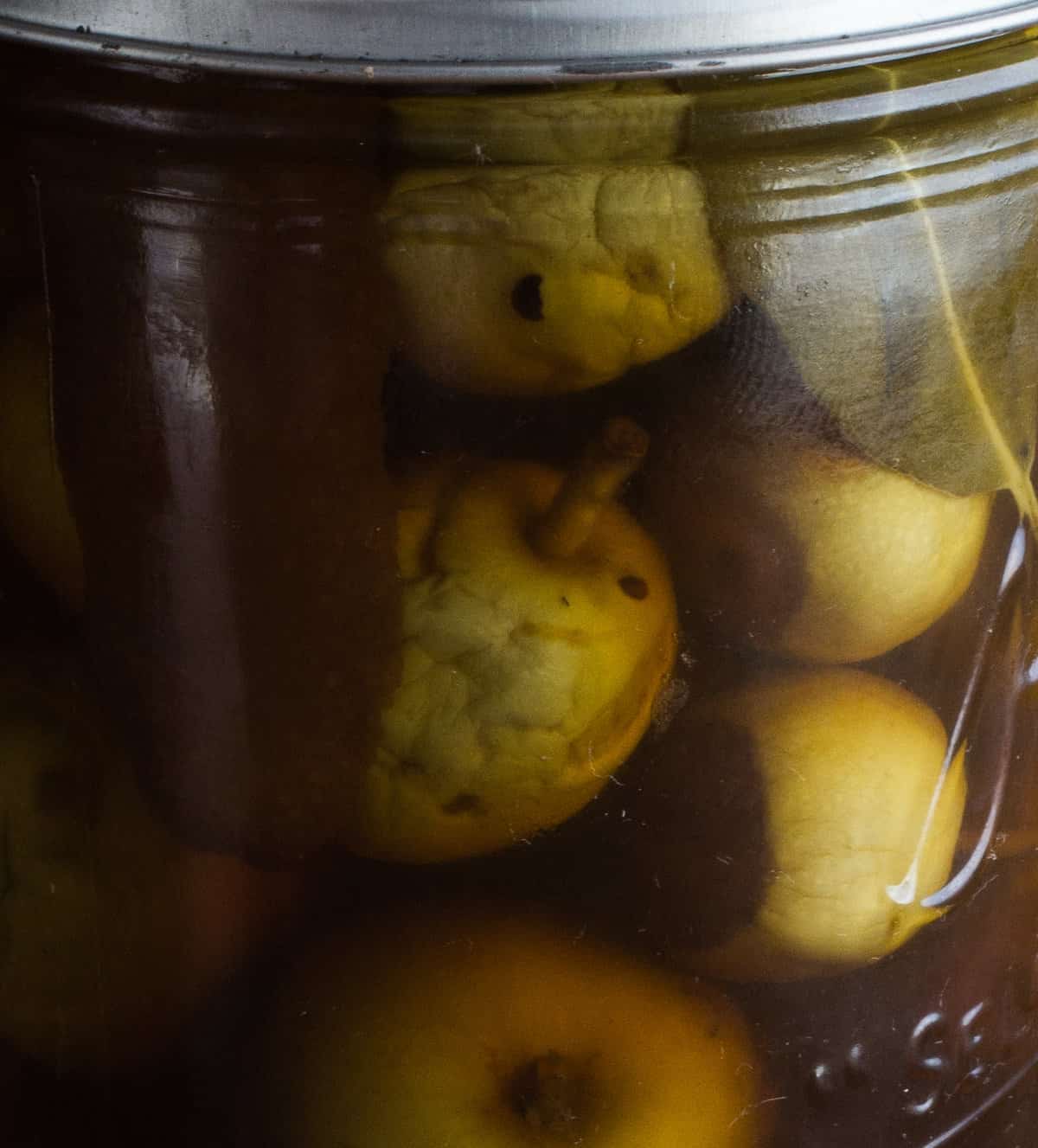 I love closeups of canning jars, they look like science experiments. We can just consider the greasy finger prints on the jar a "personal touch".

The recipe turned out great, and just a single lb of little crab apples will fill two pint jars, enough to have plenty of fun with. By themselves they make a powerful, spicy, acidic treat. But there is much more that can be done with them.

To mellow the flavor of the vinegar, you can add them to a sauce. Warming them up in a bit of stock and butter will curb their sharpness and make them meltingly soft, it's probably my favorite way I've found to enjoy them. It goes without saying too that they're a perfect garnish for pork, in any form.

To give you a fun idea of how the crab apples might be used to garnish a dish, I'm enclosing a recipe for pork tenderloin with pickled crab apple sauce. Besides the sauce, there is some sauteed cauliflower, which goes well with sweet things, as well as some fresh purslane, which also pairs well with sweet fruit and citrus, and adds some great, fresh texture. Enjoy. 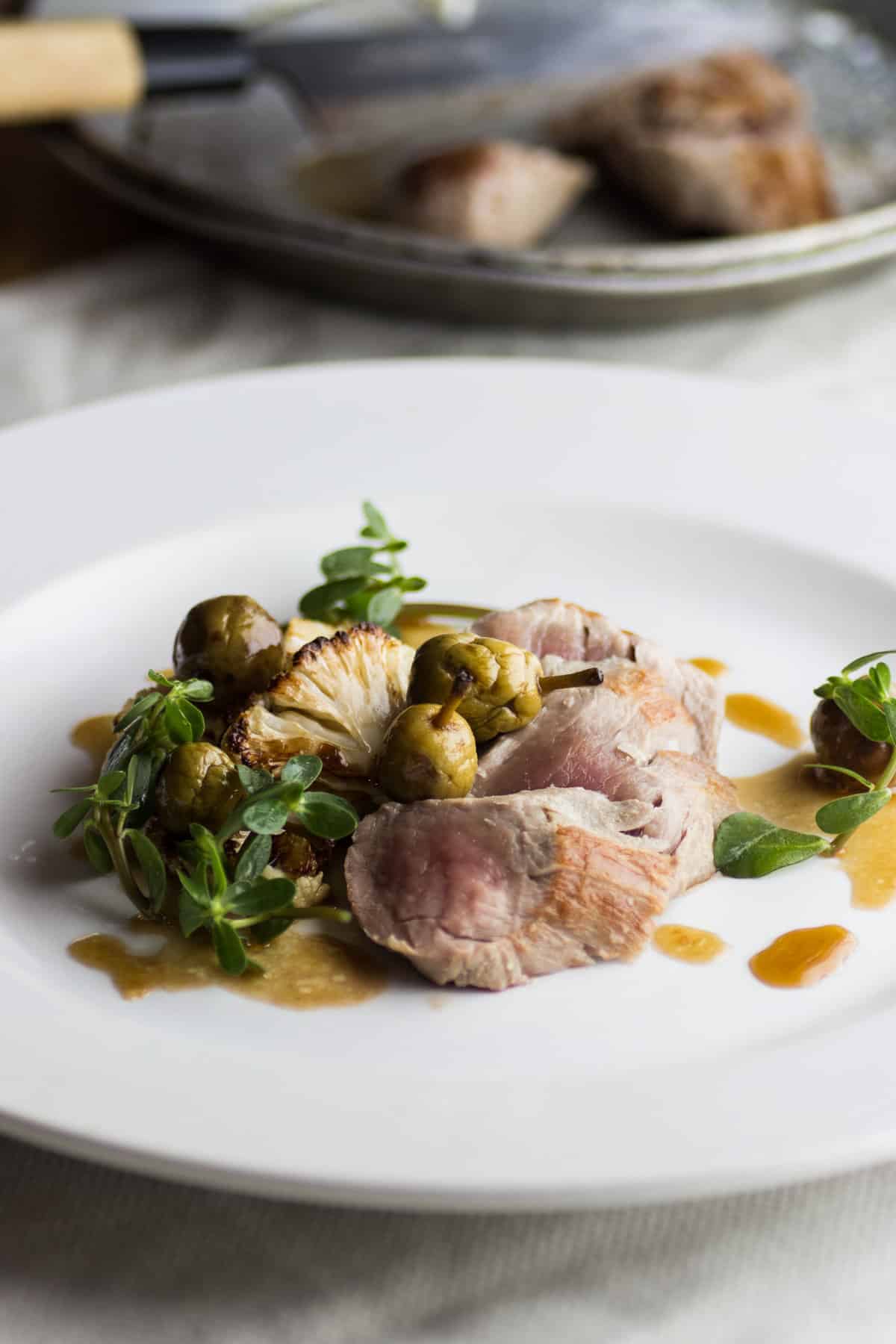 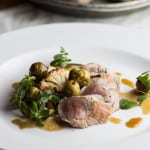 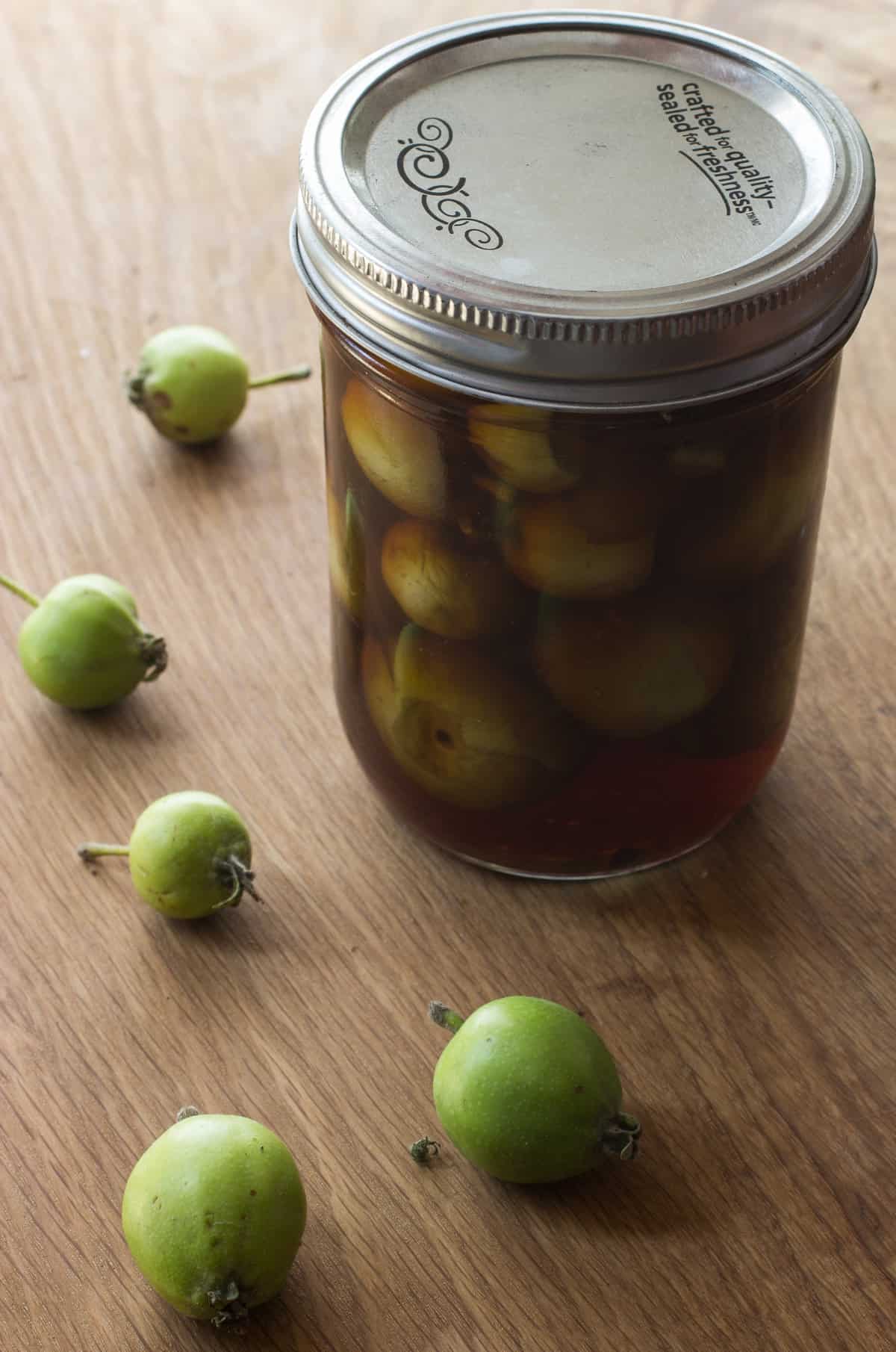 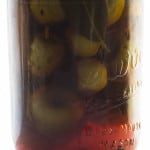 Feel free to use your own blend of spices here, the ones included are just what I felt like using at the time.
Course: Snack
Cuisine: American
Keyword: Crabapples, Pickled Apples 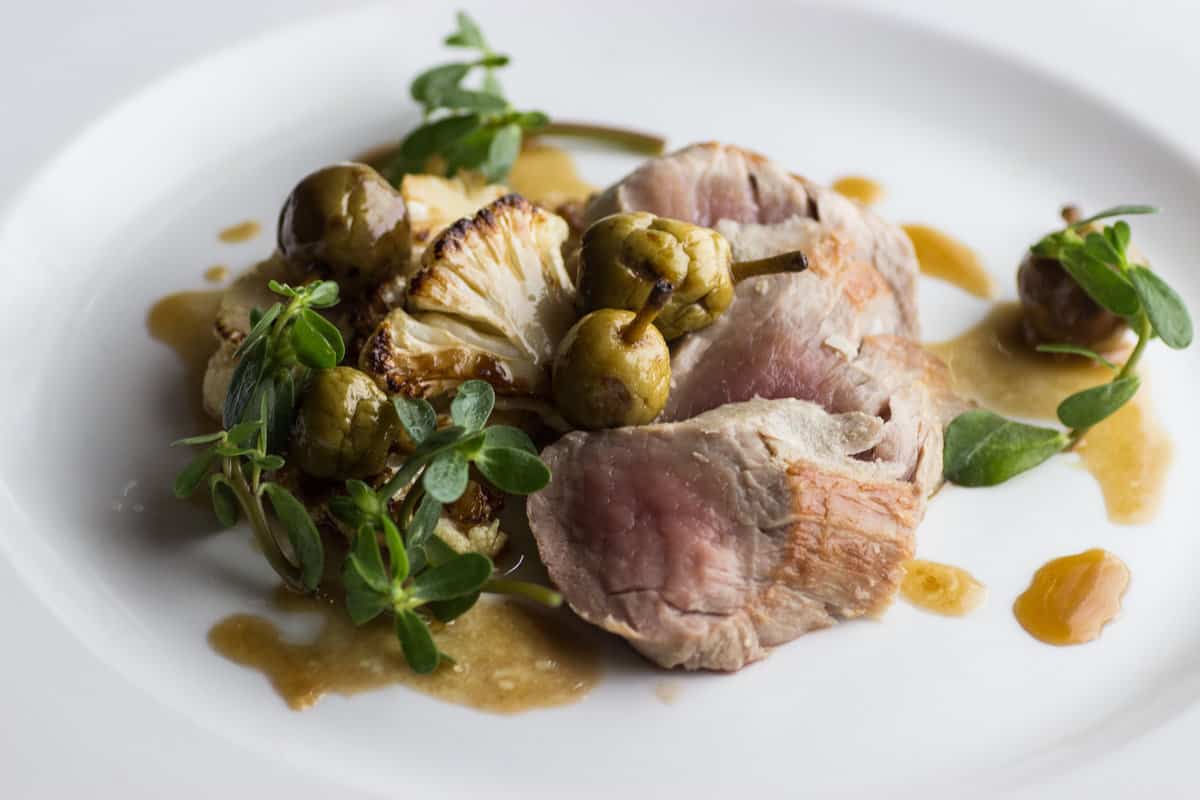