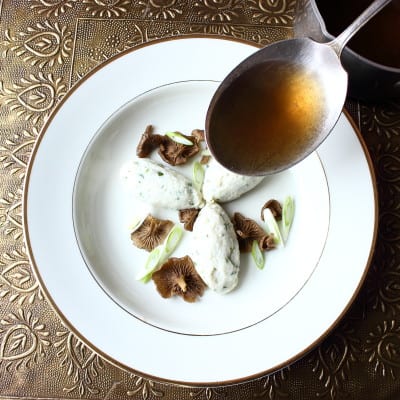 Here's a refined, elegant recipe for using nothern pike and yellowfoot chanterelles together. The Lyon region of France is famous for a recipe using pike made into fish mousse dumplings, called quenelles de brochet. Since pike is filled with tiny bones, fileting it out to be boneless results in very thin pieces of fish that can be difficult to cook properly.

Making fish mousse bypasses the problem of pike bones since the fish is pureed and mixed with other ingredients to make a fluffy fish puree, a resourceful way to treat these fish considering that it can be made with scrap and trim. Usually quenelles will be poached in order for them to hold their shape, then napped with a cream sauce and baked until the sauce is golden brown and delicious, looking like a perfect toasty brown lasagna. When made correctly, these little dumplings are great, soft and silky, with a mild fish flavor.

In this recipe, the pike dumplings are served in a consomme, which is a fancy clarified broth. We know they have been enjoyed at least since the renaissance, if not longer. Basically, you make some nice stock from roasted meat and bones, then you chill it. The next step is to beat egg whites and ground vegetables into the stock, heat it gently and slowly, stirring constantly.

This dish is at it's heart a tribute to yellowfoot chanterelles. Yellowfeet and black trumpets are to my knowledge the only mushrooms from the chanterelle family that can be dried and keep a decent texture due to their hollow shape. They make great additions to anything where you might use dried mushrooms, a standby being a soup or broth. Often consommes will be flavored with some sort of fine alcohol or spirit to impart a little extra flavor. In this case, I decided to use a vodka infused with yellowfeet. 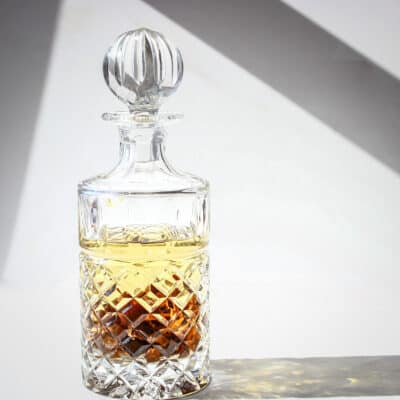 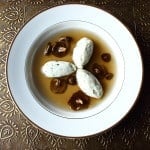 This is a light entree, to be accompanied by something like a side of vegetables and bread. In a restaurant I would serve it as a 1st course or part of a multi course menu. See the recipe for yellowfoot schapps/vodka here.