Yep, stinging nettle pancakes are a variation on the traditional nokkesletut, a type of thin pancake made with nettles from Finland and other Nordic countries. Traditionally they're thin like crepes. Here I add a puree of nettles to the dough to make deep green pancakes.

Savory pancakes were a vegetarian standby at a couple different restaurants I worked at, and Chef Russell Klein of James Beard nominated Meritage in St. Paul ran a version of them on their menu that often stayed most of the year, changing up the flavors as the seasons progressed.

If you're serving for breakfast or brunch, hollandaise, or something like sausage gravy is fine. In the dish pictured, which is probably the easiest incarnation, an over easy egg provides a natural sauce, and pairs great with the venison bacon cooked with the dryad saddle or pheasant backs and chicken of the woods mushrooms.

Just like sweet pancakes are delicious soaked in maple syrup and melted butter, savory pancakes would love to have buttery mushroom sauce, braising liquid from meat or gravy, or any manner of juicy things that would pair good with leafy greens poured on them or in their general vicinity.

To add some interest and extra juiciness to the nettle pancakes here  I like to add nuggets of goat cheese to the center as they cook, so if you want, you could call them stuffed pancakes.

Quick aside too, I used common stinging nettles here, but you could also use wood nettles. 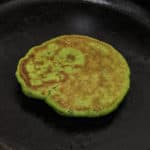 Note on serving sizes Savory pancakes are rich, so I account for 1 per person, depending on how much saucy business you have to soak up.
« Dryad Saddles with Soy and Scallions
Garlic Mustard Ricotta »