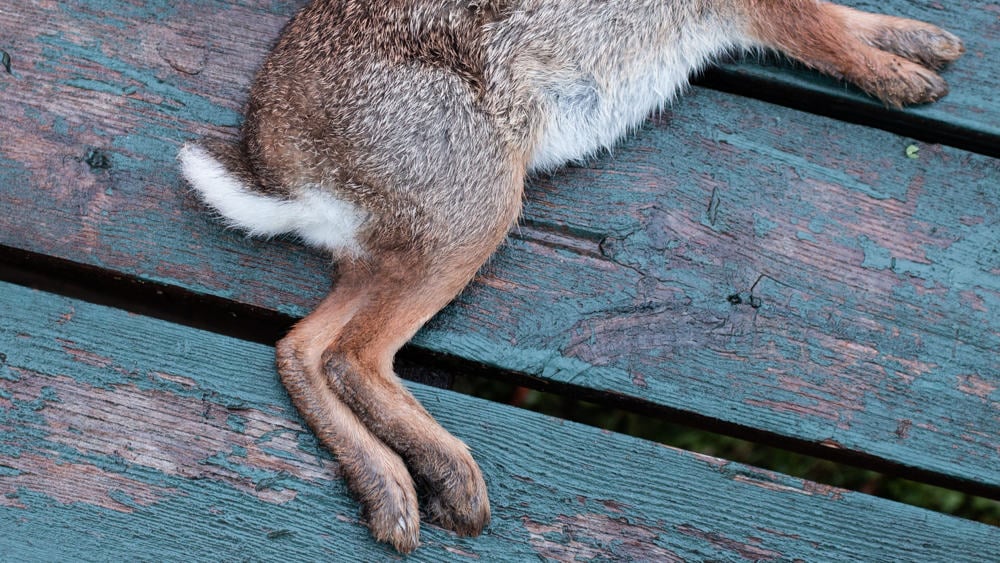 A rabbit that ate the pumpkins in my garden. I prefer to trap them as it's gentler on the meat, but I'll hunt them too.

I've shared a bunch of recipes for rabbits here, and within those are some butchering and processing tricks that are really useful, but you have to go in and really look at the posts and images to understand them or know that they're there. I had a couple requests for really basic breakdowns of how I clean and cut up rabbits, so I'm dedicating a whole post and quick tutorial video here focused only on my process. 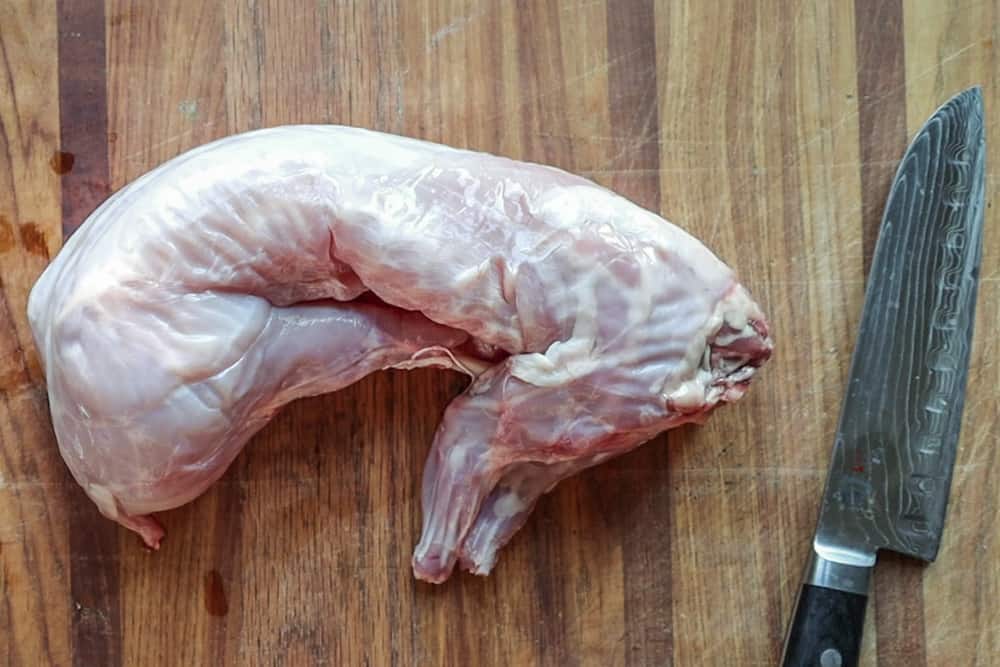 The beauty of rabbits and other small game is that the technique for breaking them down I use is the same. After dispatching, gutting and skinning, I remove the legs, then use a poultry shears to cut the rest of the torse into even-sized pieces. 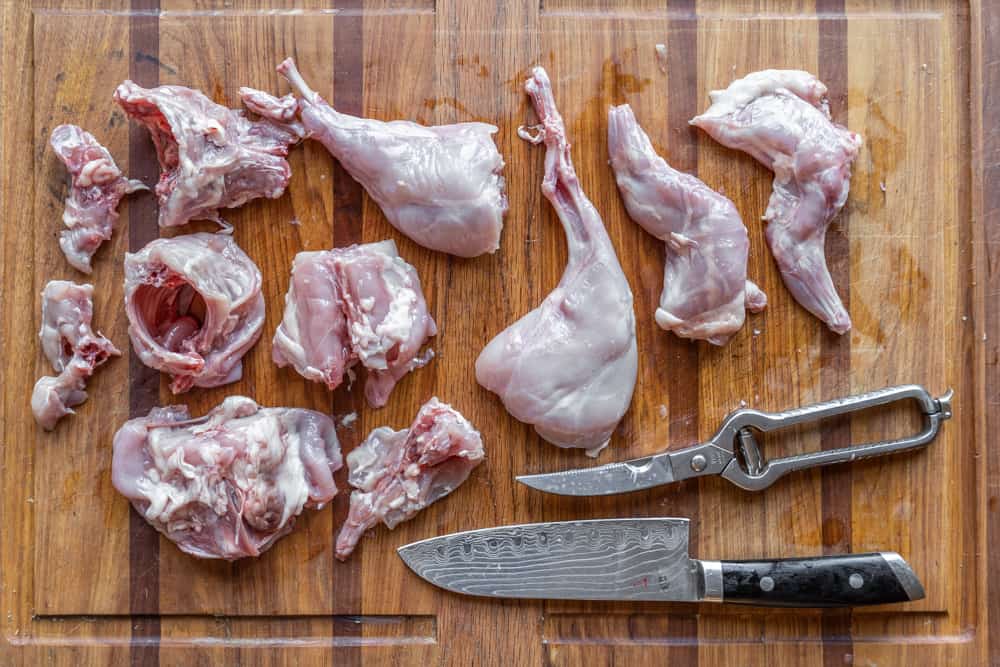 Small even pieces. This is the most common method of cutting up rabbit, and is good for soups and stews. Once you've mastered this, branch out and save some of the different pieces for special recipes.

The ways you can cut up an animal are only limited to your imagination. Here's two slightly different methods you could consider. 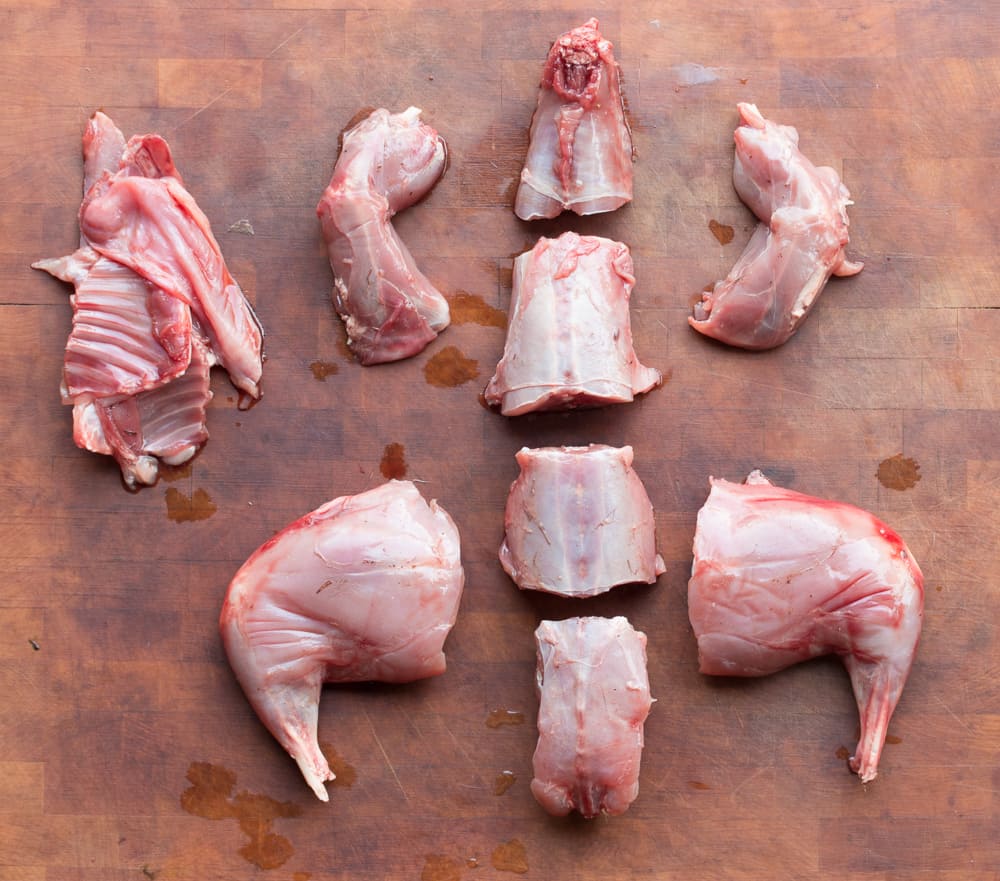 A cleaner method where the ribs are removed and saved for another purpose. This method prevents small rib bones from migrating into your stew, and is great for making fried rabbit.

This one I don't use too much, but it helps illustrate possibilities. When I worked for Chef Lenny Russo, we were instructed to remove the loins from the torso, which were saved by themselves to make a boneless roll of rabbit loins wrapped in lardo, which was an experience. Many years, and many rabbits later, I've found I like to cook the loins on the bone as it keeps them moist, but if you want to fry them up as a quick snack or alongside other pieces you could do that too. 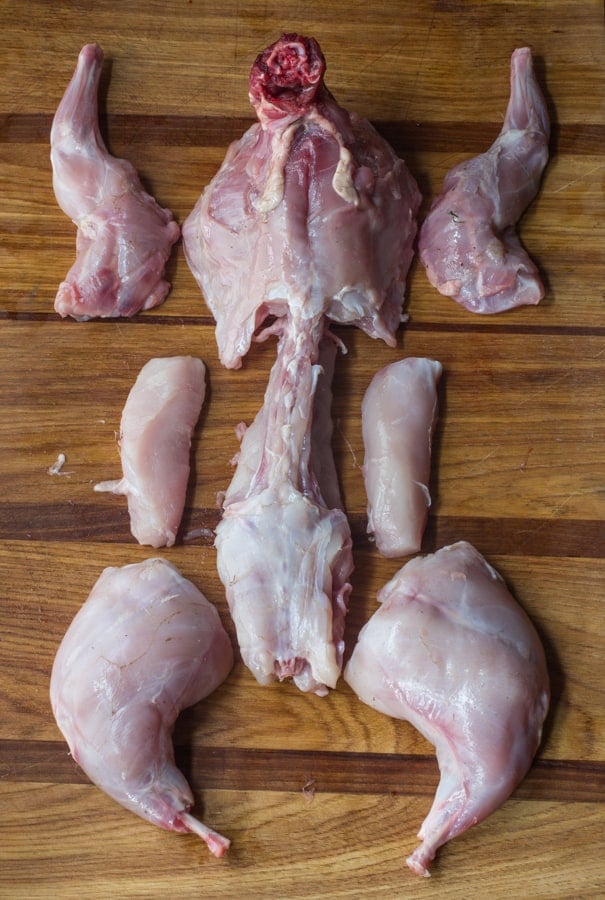 A slightly different treatment. Here the loins are saved to cook by themselves as they cook very fast. the torso will be cut up with a kitchen shears and roasted for stock. 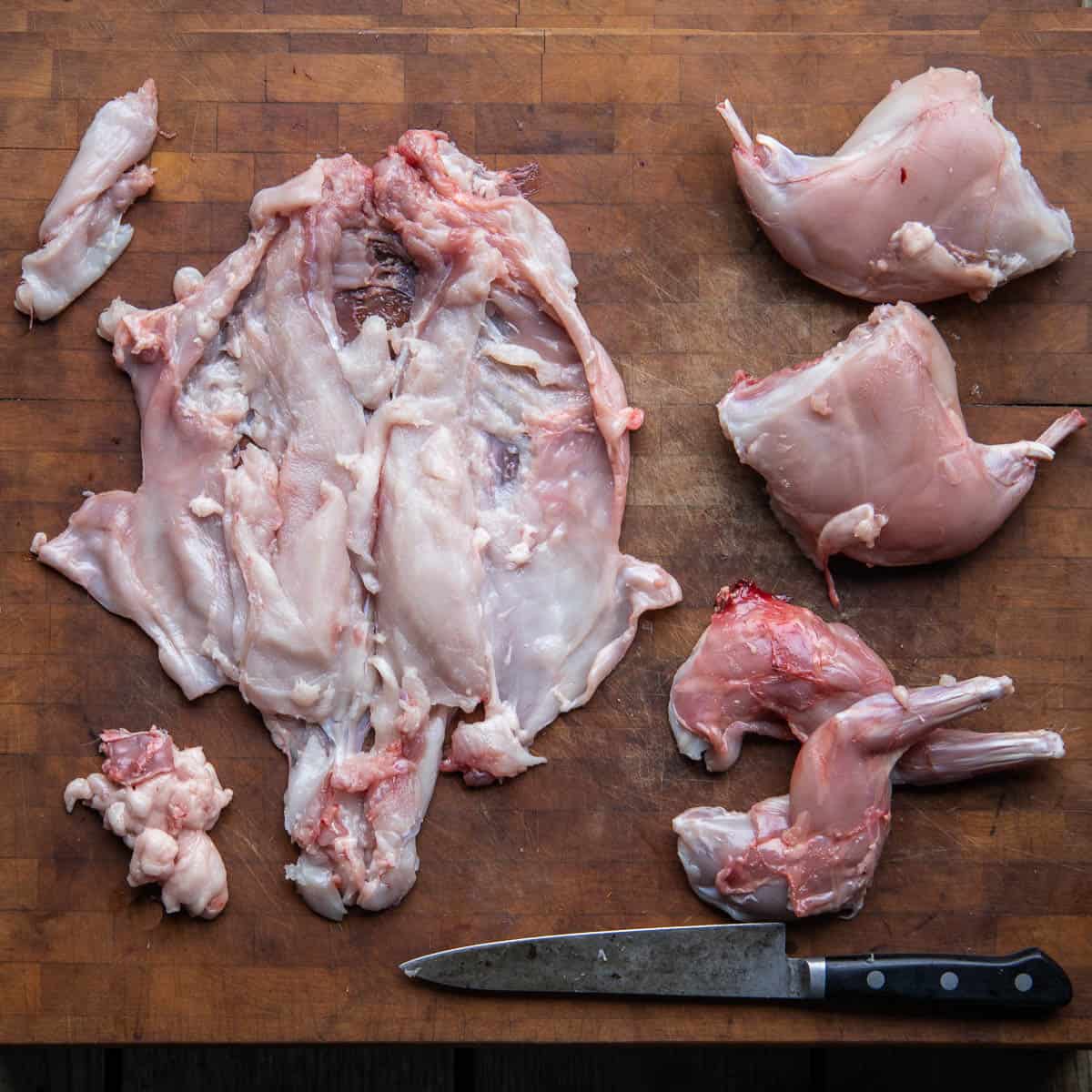 Deboning a rabbit torso so I can stuff and cook the saddle. This is the most refined recipe I have for rabbits, and it takes some decent knife skills.

Without a doubt, among chefs in the know, the saddle is the most prized part of the animal. But, if you haven't seen or tasted one before that's been made properly, you might just throw them in the stew pot, which is perfectly fine and is what most people will do, especially if you only have one rabbit. But, if you're adventurous, skilled with a knife, and have more than one rabbit to work with, saving the saddle is something you must try, at least once. 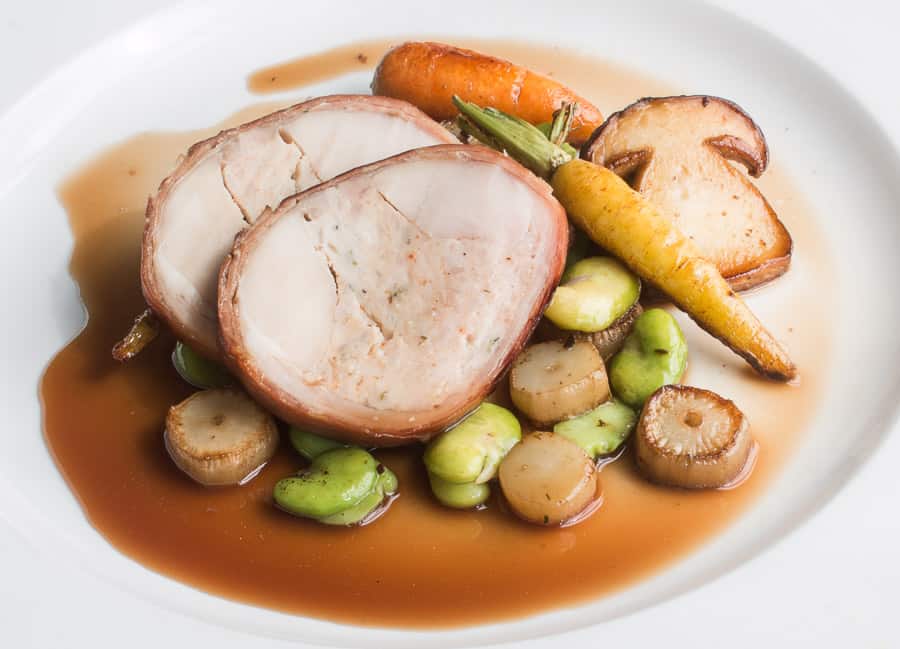 Example of a finished rabbit saddle, stuffed, rolled in paper thin smoked ham and sliced. I like to slice a couple pieces as an entree, as opposed to serving it in a big lump with a steak knife.

The anatomy of a rabbit's back legs is such that after you remove the back legs via the joint, there is another bone that can be removed before the torso is left in one whole piece (sometimes called the helicopter bone as there's a hole in the middle). At first glace they may not look big, but if you're butchering a bunch of rabbits, it is well worth the time it takes to separate them for cooking on their own. 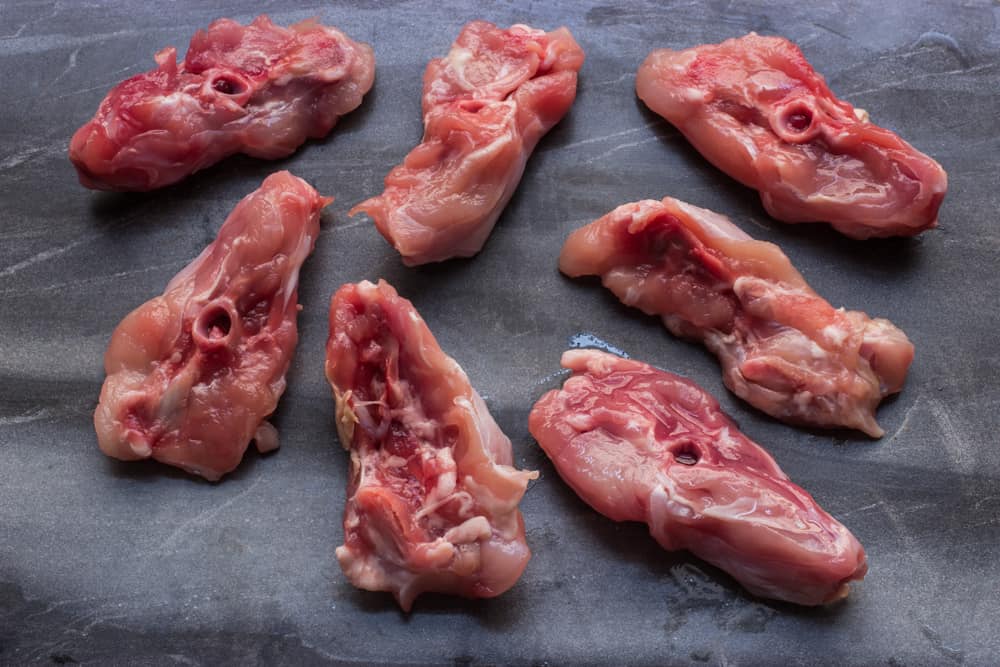 Rabbit wings or helicopter bones, these are attached to the bottom of the torso after the back legs are removed. They're good eating.

These were something I used to run at my first restaurant after I noticed them in the stock pot after butchering. After I tried some prepared like dry-rubbed chicken wings, I was hooked, and I had my line cooks save every single one when we had rabbit on the menu to run as a special. Slow roasted and eaten off the bone, they're fantastic. 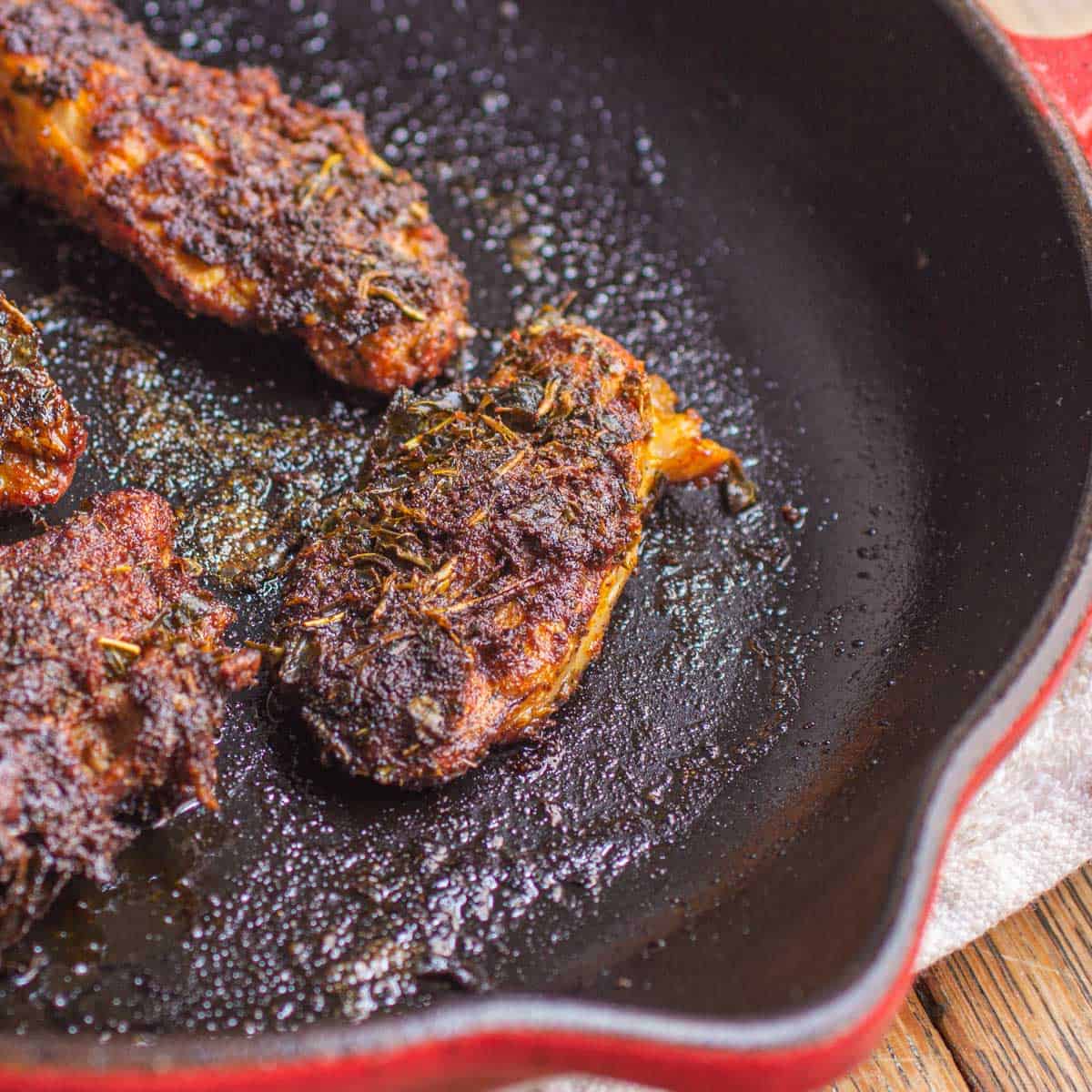 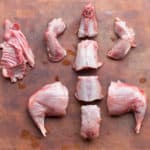 How to Cut up a Rabbit for Cooking

A simple, quick tutorial on how I cut up a rabbit for general cooking.
Prep Time20 mins 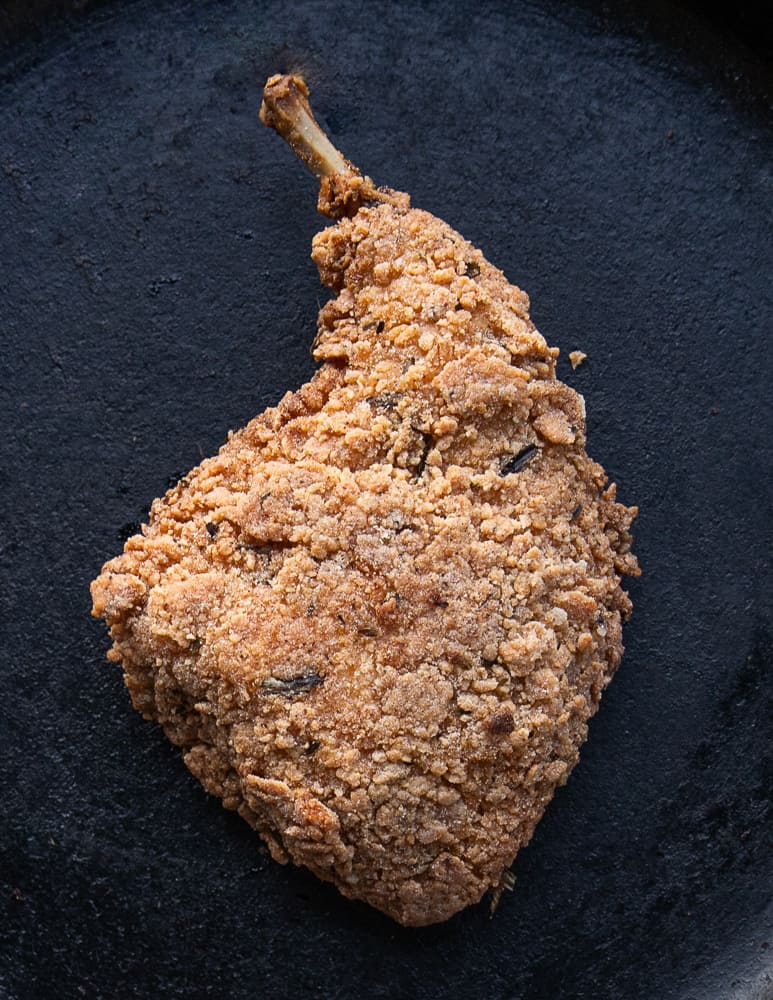 Buttermilk fried rabbit is one of the first things you should make.