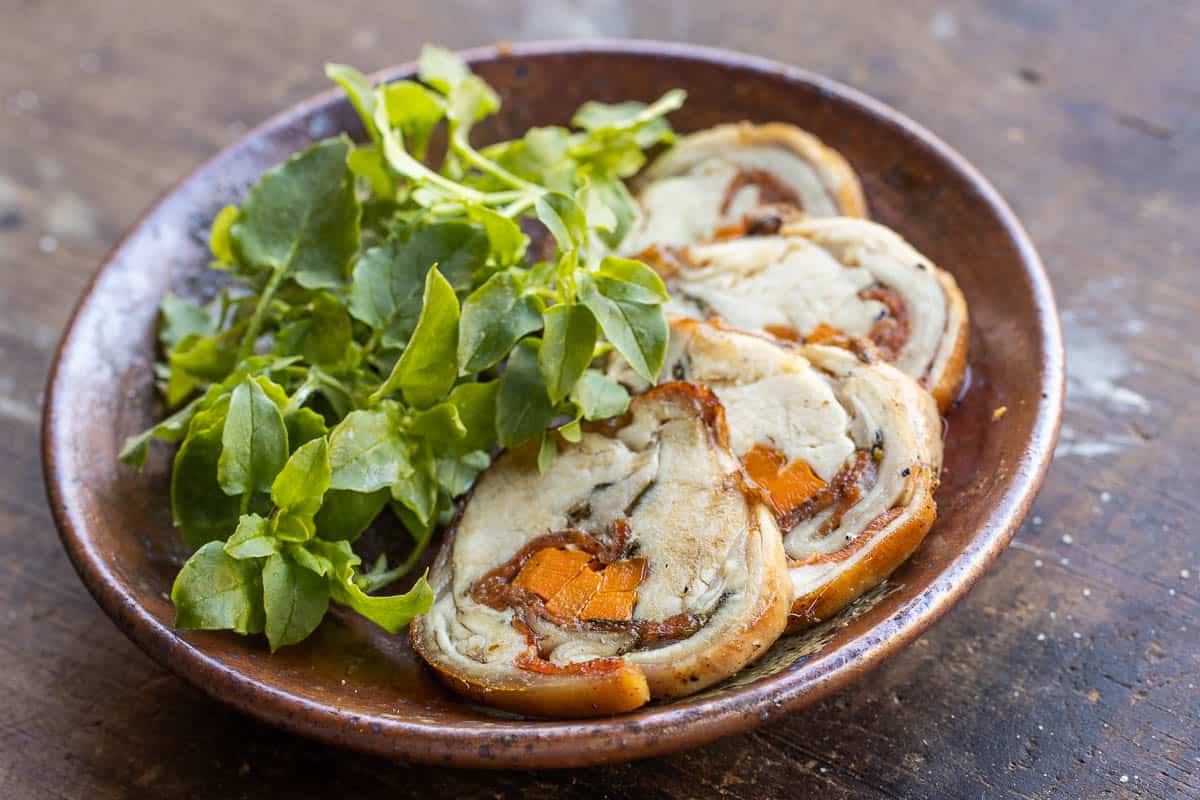 When I worked under the former personal chef to the princess of Monaco, boneless rabbit roulade was one of the dishes on my station. Essentially it's a roll of rabbit, without bones, stuffed with a slice of prosciutto or other charcuterie that's cooked and sliced, and served warm or cold.

It takes some skill with a paring knife, but as I'll show you here, it doesn't have to be perfect, and it's an ingenious way to get more servings out of a rabbit. It's also a nice little piece of rabbit charcuterie if you want, and a great stepping stone into the world of deboning animals to make great things like galantines and ballontines, but those are techniques for another post. 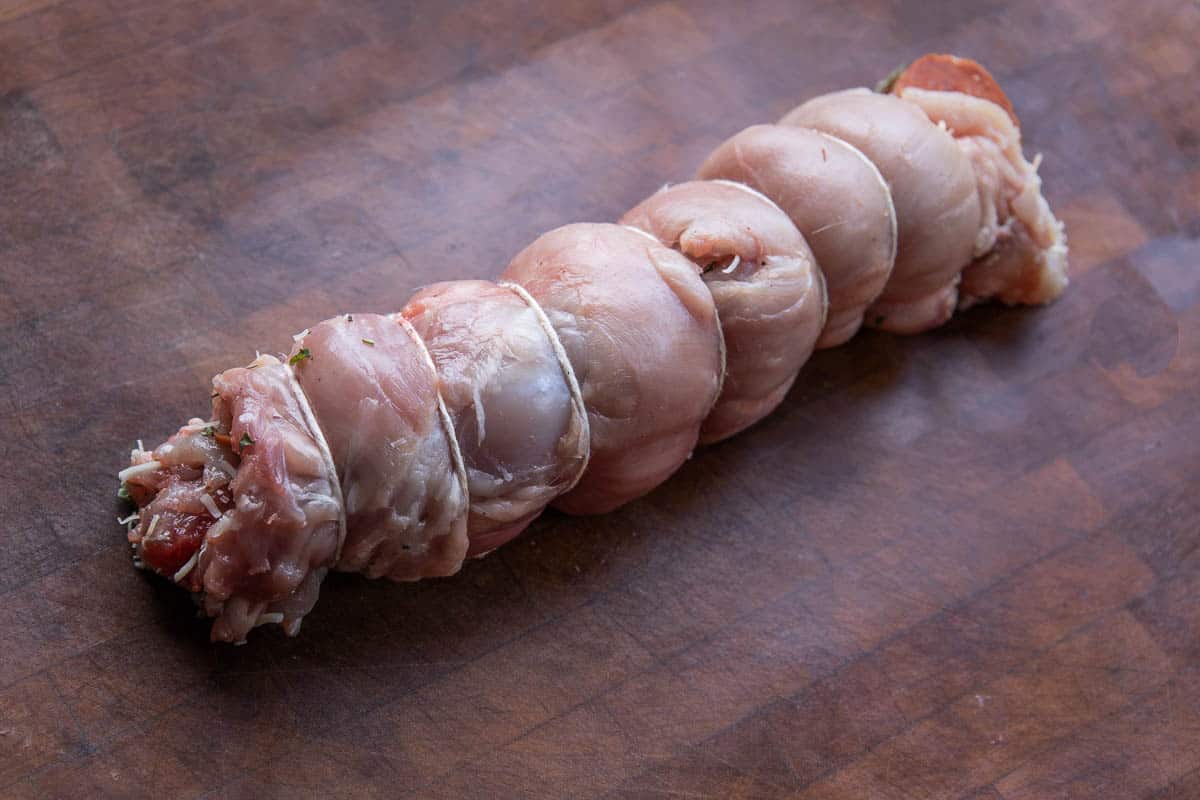 Boneless roulade of rabbit. It can be done! I have faith in you.

From a restaurant standpoint, rabbit can be tricky to put on a menu as it's often expensive. And, unlike a chicken, you only get 2 large legs—no breasts. So, you'll essentially get 2 entree-sized orders from each animal, and a couple bits and pieces (loins, front legs). Combine that hard cost with the fact that a lot of people in America still consider rabbits more domesticated animals along the lines of a cat or dog, and it's a tricky formula to make work financially. With some creativity though,  you can get extra orders/servings out of those rabbits, and it's absolutely worth trying. 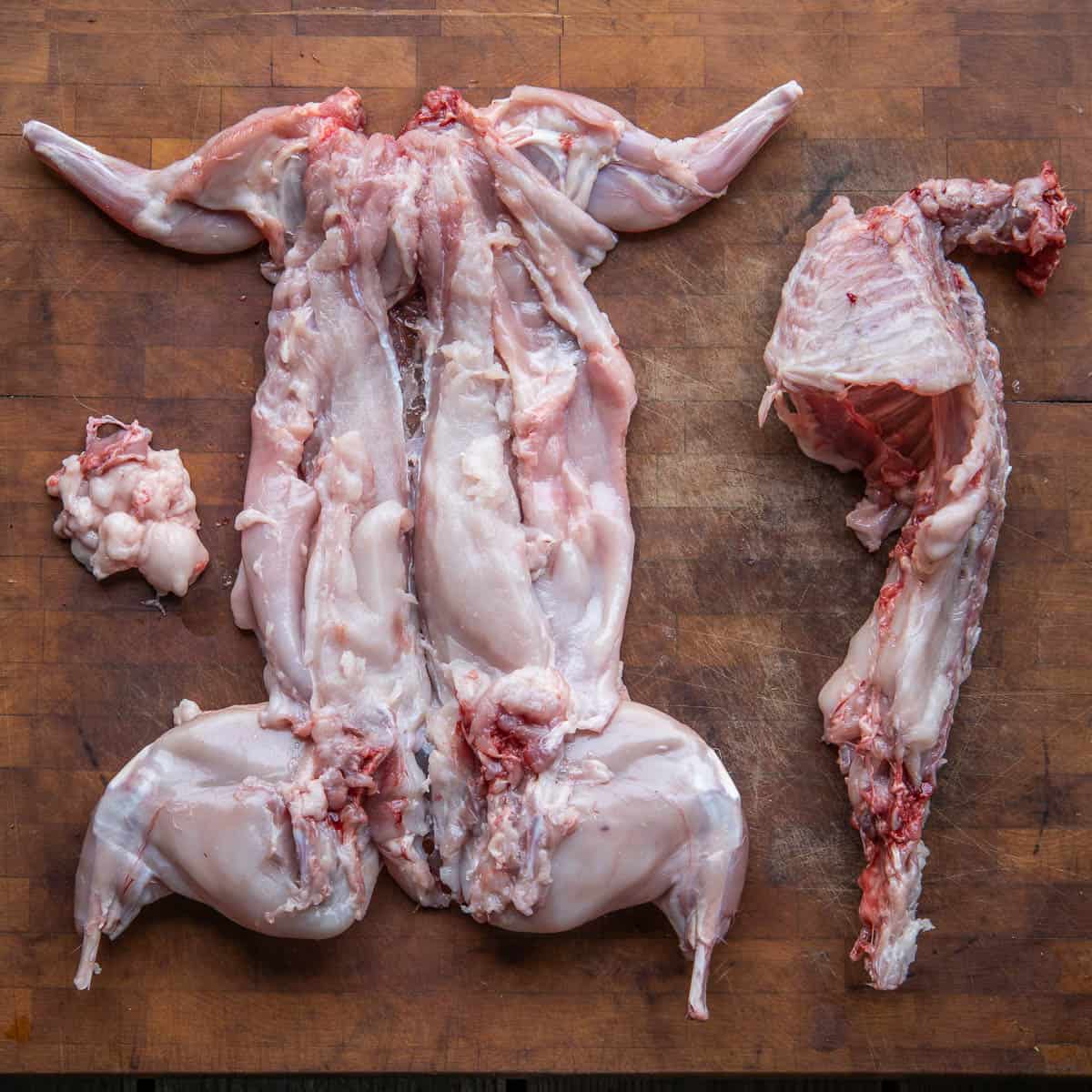 How to debone a rabbit

This is the magic. You're going to need a sharp paring knife, and a little patience. The first thing you do is put the rabbit, cavity-side up, dislocating the front and back legs to stabilize it while you do the detail work (for reference, you can debone a chicken in exactly the same way). With your paring knife that you sharpened moments before starting, begin carefully cutting next to the rib bones to peel the meat away. it will seem like the meat is paper-thin, and it is. If you make a mistake and break through the skin, it's okay—don't worry. Once everything is all done you'll roll is up and it won't matter. 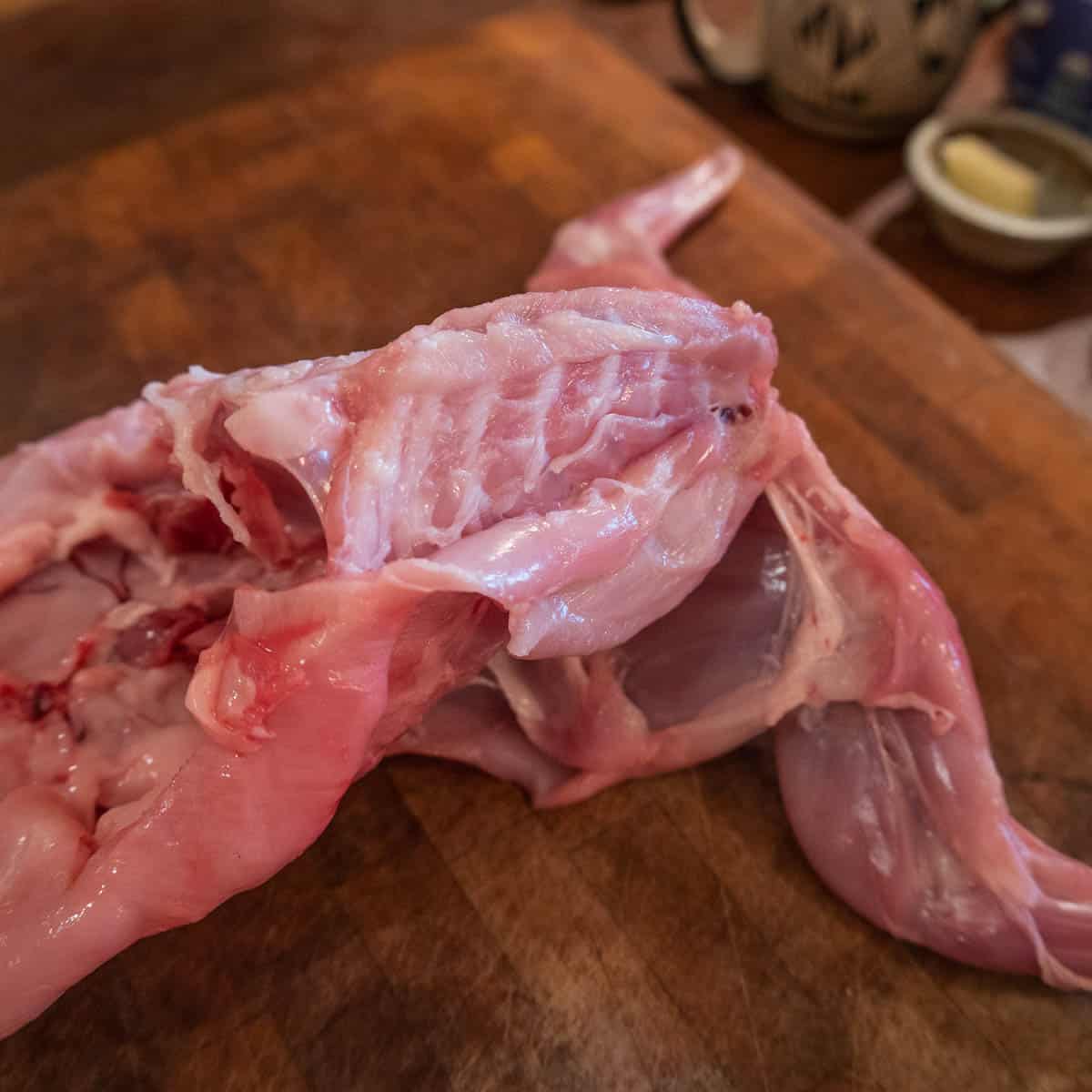 Starting at the ribcage, you'll use a paring knife to remove the thin layer of meat from the bone.

One you release the ribcage you'll eventually get down to the spine, and that's the trickiest part. The skin is very thin over the backbone, and it may look like it's impossible to separate the meat from the carcass. Like before, don't worry, if you cut through the rabbit's thin skin here it won't matter in the end since you'll be rolling everything up. Just do the best you can, continuing to make shallow cuts in order to separate the rib cage from the meat. 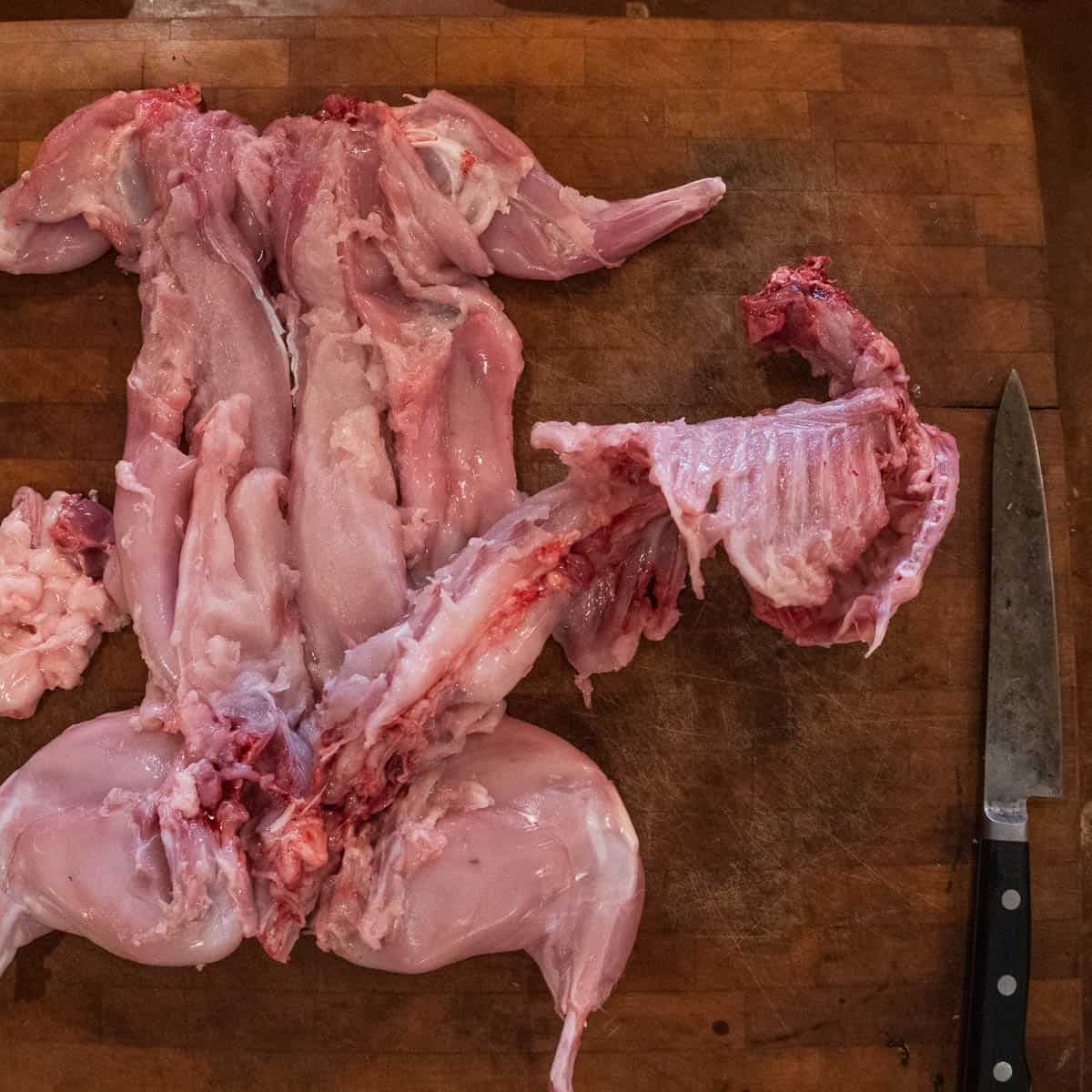 Once the rib cage is out--congratulations! The tough part is done. Now all you have to do is continue removing the spinal column and ribcage, which will come out in one long piece—save that for stock. Now, you'll be looking at a flat sheet of rabbit meat with the legs still attached. Remove the legs at the joint for another purpose and proceed. You'll also want to remove any kidney suet or fat you see, which is good roasted and added to the stock pot,  or rendered in a pan to fry some eggs, etc. 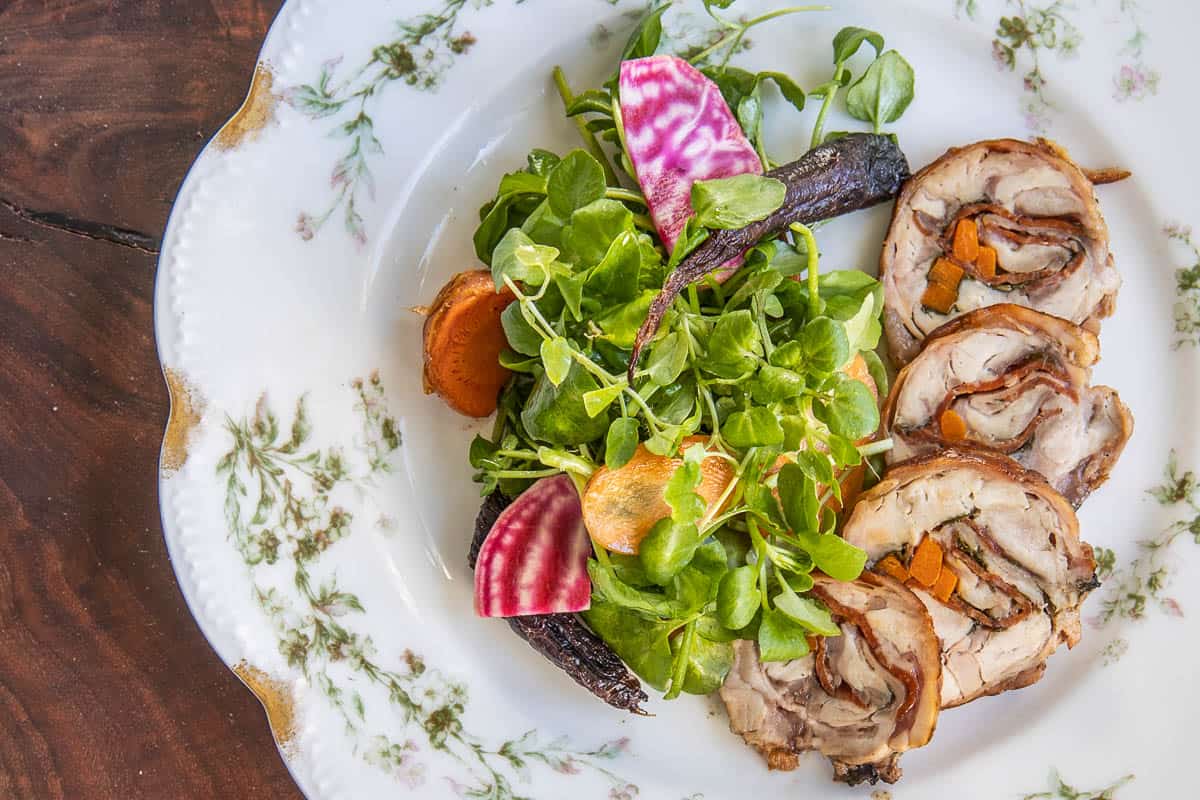 At the restaurant, we served the roulade with a salad of baby vegetables.

Stuffing is a bit of a misnomer here, since there really isn't much stuffing. You can put all kinds of things in here, but the key is to not over do it. A sprinkle of herbs, a thin layer of prosciutto, a couple julienned carrots is all you need. You can make a more involved stuffing like a forcemeat or sausage, but since this will be long-cooked you run the risk of it drying out. 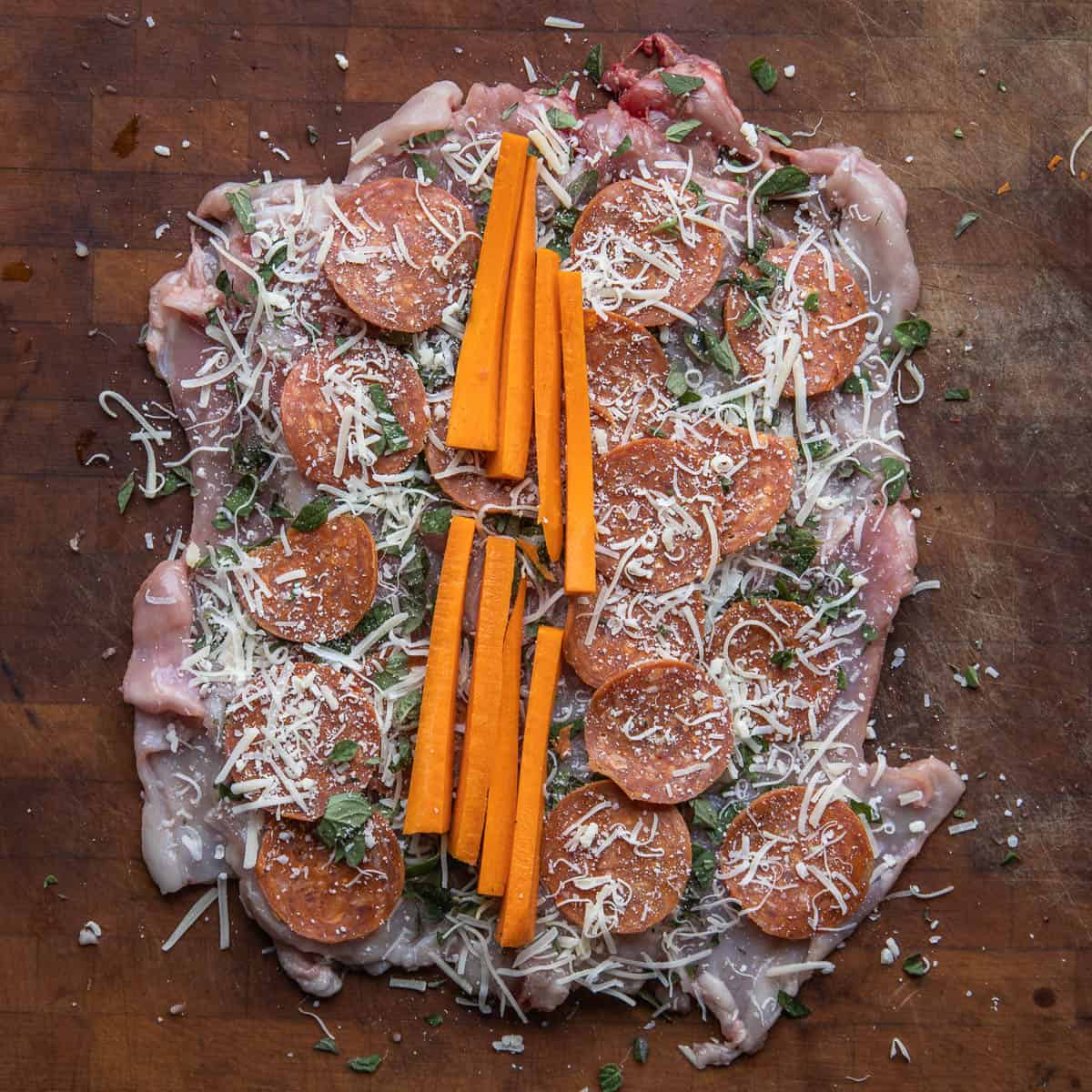 My advice is to try and reproduce my recipe here as close as you can, and branch out afterword on your next rabbit. For my stuffing, all I used was a few slices of pepperoni that were in the fridge, a scatter of fresh oregano, a sprinkle of parmesan, and a julienned carrot. 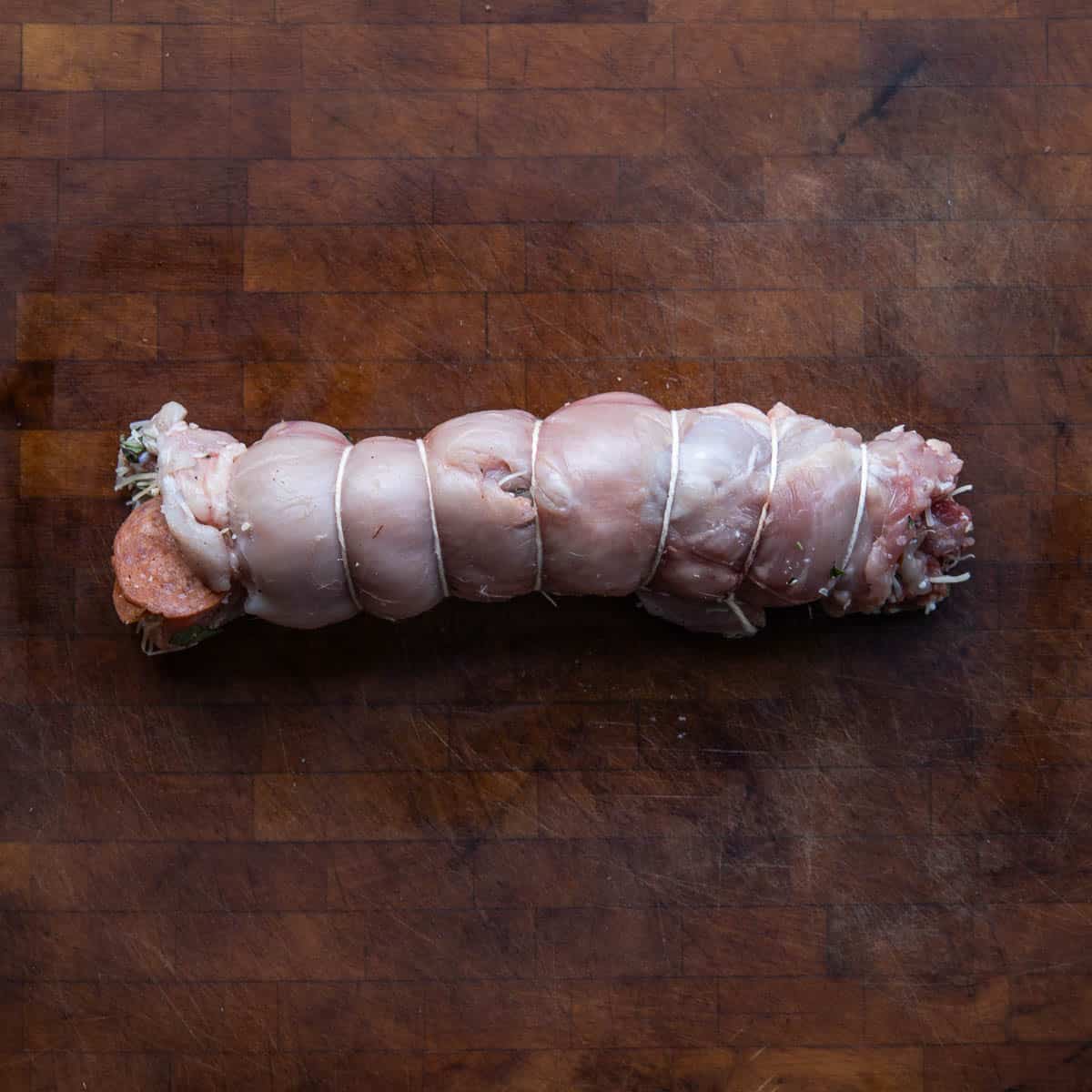 Roulade means rolled, so that's exactly what happens here. Roll the rabbit up into a log, then tie it with butchers twine to keep it snug. If you have a sous-vide machine, you could also vacuum seal it and cook in a water bath, for that, I'd do 190 F for 4 hours. 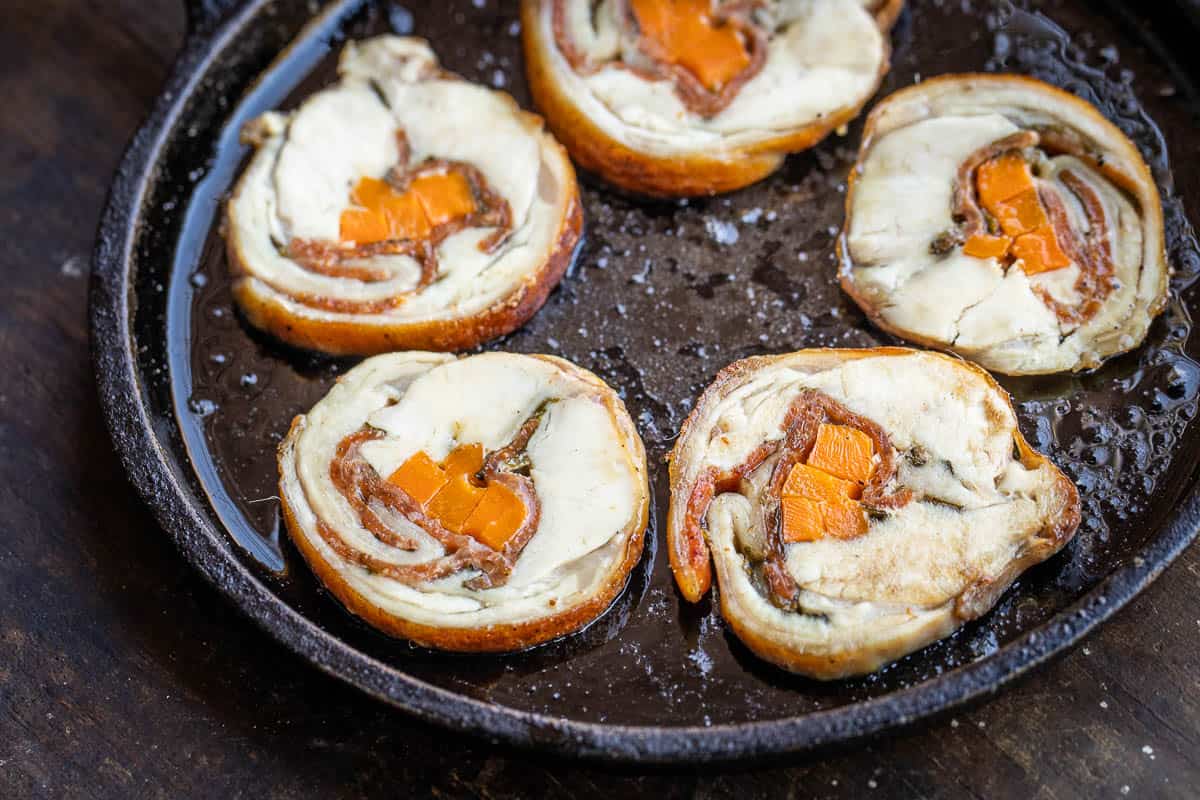 A boneless roulade of rabbit is a delicious way to get more out of your bunny. Serves 2 as an entree or 4 as an appetizer.
Prep Time45 mins
Cook Time2 hrs 30 mins
Chilling time2 hrs
Course: Appetizer, Main Course
Cuisine: Italian
Keyword: Charcuterie, Rabbit
Servings: 2

Start at the ribs 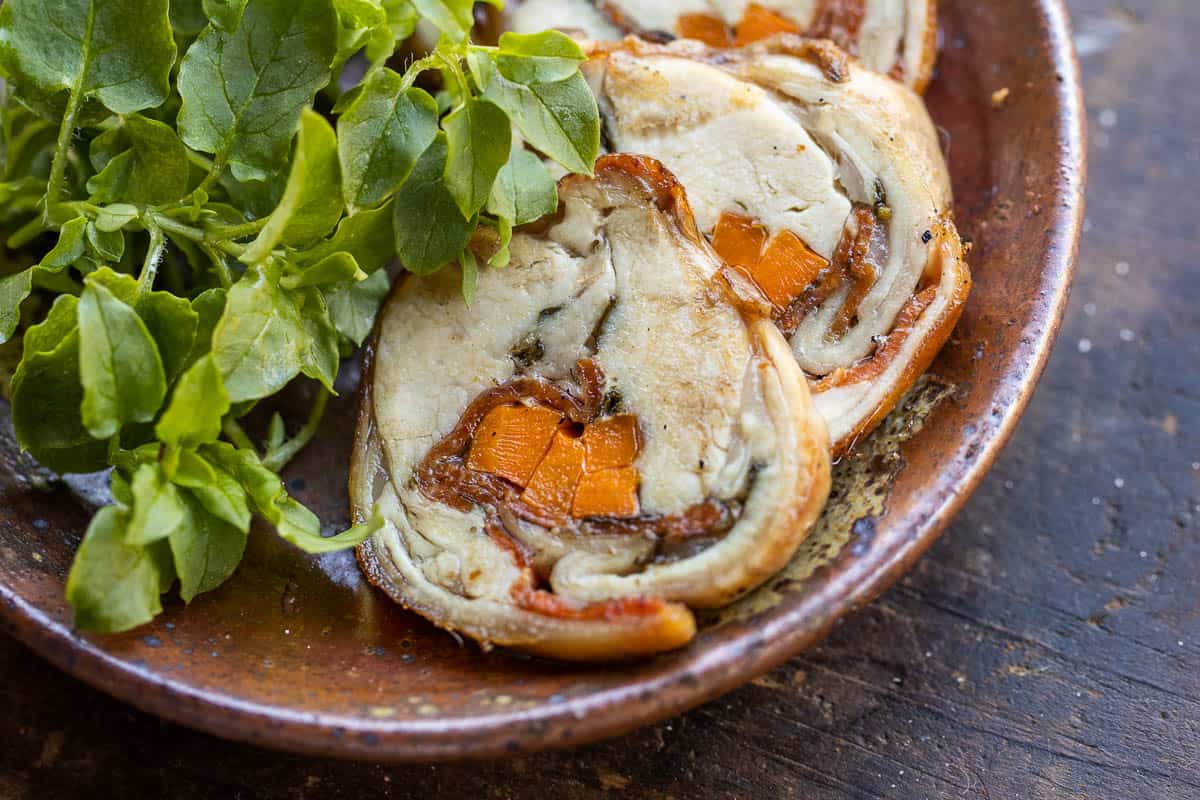