A wild tree fruit that eats like a nut loaded with carbohydrates, protein and fat, and tastes a bit sweet like squash with hints of dates? Yes please.

If you're in the Midwest and looking for something interesting to forage in the winter, our common Hackberry (Celtis occidentalis) is a tree that you should meet. Since there's a number of related trees, for this post I'm only referencing the common hackberry, since it's the only one I've foraged and eaten in quantity.

I'd heard about the hackberry tree and it's fruit, and I kept on thinking "why can't I find any any?". As is often the case, I'd probably walked by hundreds of them without knowing it. My first experiences with the tree went like this: during morel season, I'd walk around places with elm trees looking for morels, and I'd see lots of area that looked "elmy" but didn't have as many morels as I would've hoped.

I'd walk by a tree, take a look at a leaf, notice some strange growths on the bottom of the leaf and think "well that's a weird elm". later in the season I noticed those same weird elms made small pea-sized fruit. Arborist, I am not.

I know now that the trees with the strange berries were hackberries, and, as the leaves look similar to elm leaves (both are in the Ulmaceae), It's understandable how I could mistake them at a glance. But, in retrospect, I should've known better, since I knew that elms make samaras, not round, green or purple fruit.

"In sheer survival value, it (hackberry) is unsurpassed"—Sam Thayer

There's a wealth of history hidden in the hackberry. Sam Thayer's account of it in Nature's Garden was (as usual) the most helpful and comprehensive account, but Daniel E. Moerman's book on ethnobotany was interesting too. Here's a few highlights from those two books.

Now that, is a lot of ethnobotanical history.

The fruit of the hackberry tree is a small, hard fruit made of a paper-thin layer of sweet tissue surrounding a hard seed. It's unassuming, and at first glance/taste you may wonder "how the heck could you cook hackberries?!" but looks can be deceiving.

There's tons of things you can make with them, but it's better to think of the hackberry as less of a berry, and more as a nut or seed—more on that in a moment.

Once I noticed the brown seeds and corky, worty bark, I started seeing hackberry trees everywhere. On Cathedral hill in St. Paul where my test kitchen is, they seem to line the streets. Picking fruit on the street is not as private as I like though, so I went to a few places I know that are "elmy" and there, I found oodles of hackberries I can pick without the judging eyes of civilians.

To be more specific, flood plain forest, and forests with other species like cottonwoods and elms should have plenty of hackberries. As a bonus, in the spring you can go to the same types of forests for sochan and wood nettle—two of the finest wild greens I know.

Use a fruit hook to reach low branches

Once fall comes around, the pea-sized berries will be ripe, with the ones I've picked varying in color from dark maroon to orange or brown. You can pick hackberries while the leaves are still on the trees, but it's much efficient to pick them after the leaves have fallen.

Using a fruit hook, or even the hook of an unraveled coat hanger (my personal favorite) can make getting the berries easier, since the hardest part can be reaching the branches. I also use a blicky attached to my waist so that I can use both hands to pick. If you don't have one, this one is what I use.

The berries are hard and durable though, so you have a good window for harvesting from about September, lasting through much of the winter in the Midwest. They can even last through the spring thaw, like Kentucky Coffee Tree pods.

Picking hackberries is not a fast process, and after a few trials over the past two years I'd say that I could get about 1 quart an hour. "Quick harvest" will not be a word that comes to mind, but in the winter, a little meditative practice can be nice.

Good things come in small packages, and like Sam Thayer mentions in Nature's Garden, the small amount of berries are worth a lot more calories than a comparable amount of other fruits in that they contain fat, sugar, and carbohydrates. In fact, Sam goes so far as to say "In sheer survival value, it is unsurpassed".

"But if they're almost all hard seed, how could you ever cook with hackberries? Some people might ask, and it's no wonder, since multiple wild food guides I own fail to mention that the seeds are edible at all.

One book I consulted (and won't name) bemoans the fact that there's "so little flesh" and then suggests spending a few hours collecting berries, simmering in water, straining and discarding everything to make sugar syrup!

You might as well not pick them in the first place and leave them for the birds, at least the birds don't waste them. Hackberries may be rich in carbohydrates, protein and fat, but that's only if you consume the whole thing. Id' wager the thin, papery skin is mostly sugar.

There's a number of things you can do here depending on your preferences, more specifically your tolerance for things that are crunchy. Hackberries are mostly hard seed, and that seed won't ever completely break down. It's not gritty like dirt from a mushroom, but it's something you'll notice, especially if you don't sift or strain them.

People have eaten, and enjoyed these for a long time though, so don't throw the hackberries to the birds just yet, I have a couple tricks that will change the game for you if you've tried them before and thought they weren't worthwhile.

A sort of rustic nut milk that tastes faintly of dates, hackberry milk is one of the easiest things to make with hackberries, especially if you find you don't care for the texture of the seed, so, if you're new to them, this is where I'd suggest you start.

The technique is an ancient one, also used with mashed hickory nuts, shell and all. See the example recipe in this post for the break-down. The nice part about the hackberry milk is that you can get all the fruity, nutty goodness and nourishment from the berries without having to deal with grit.

Hackberry milk makes an fine drink served warm, spiked with a dash of maple syrup and a touch of cinnamon. You can also use it for cooking, as I've illustrated with my hackberry souffle and bonet pudding.

The simplest method of consuming hackberries is just bashing dried hackberries into a meal, seeds and all. After they're ground up they could be mixed with ground nuts and dehydrated fruit ground to a powder and plenty of other things, similar to Euell Gibbon's original "wild candy bar".

The texture of the seeds may not for everyone, but don't let the idea of crunchy berries scare you away. Small wild cherries are another fruit people have eaten for millennia and they're also consumed ground or pounded, shell and all, by Native American tribes, as well as people in Siberia (chokecherry / Prunus virginiana and bird cherry / Prunus padus, respectively). Hackberry seeds aren't nearly as crunchy as cherry shell fragments.

Wasna, or pemmican enjoyed by Native Americans of the Great Plains, is made from dried, mashed chokecherries mixed with dried meat and fat.

The texture of the shell fragments are crunchy, and noticeable, but, when I spoke with my friend Linda Black Elk this year, she told me that the elders loved the crunch of the cherry shells. The texture of ground shells is said to be similarly appreciated with desserts made from bird cherries in Russia, too.

Straining or sifting are two techniques you'll want to use to mellow the texture of hackberry seeds. Sifting is the best I've found for cold preparations like the Euell Gibbons Hackberry Candy Bars below.

After sifting hackberries ground in a spice grinder (I use a tamis sieve, but a flour sifter would work) the largest particles of seed can be discarded, and the smallest ones, which have a softer texture, will pass through.

Note that to be able to sift hackberries, they'll need to be completely bone dry-I put them in a dehydrator on high for a few days and forget about them. Fresh hackberries will probably make a paste in the spice grinder.

Straining is for liquid preparations. Like sifting, the goal here isn't to completely remove the seed particles and give you a velvety-smooth liquid, since some of the very small particles will get through the strainer, rather, straining will decrease the total proportion of seed particles to an amount that isn't bothersome.

After sifting or straining, and then, most importantly, mixing with other ingredients, there'll be just enough hackberry texture to be interesting, but not enough to turn off skeptics. Trust me.

I had to try replicating Euell Gibbons wild candy bar. I ground some hackberries to a meal, then combined them with equal parts ground dried wild blueberries and toasted hickory nuts by weight, binding the mix with just a touch of maple syrup.

The flavor is excellent. The texture won't be for everyone. But, like Linda's elders and the chokecherries, some people may find it strangely addictive, and at the very least tolerable.

You can tweak the hackberry seed/fruit/nut ratio however you like, and, ground finely, in the right proportion, they make an interesting conversation piece, with a sustaining quality like a granola bar from a planet with intense gravity. After eating two one-ounce portions of the hackberry-fruit-nut bars I made, I was full enough I forgot to eat lunch.

It's easy to see why humans and animals have had a relationship with the fruit dating back to antiquity, since, mixed with nuts and fruit, you'll have a serving of fat, protein, and carbohydrates that could sustain you, at least for a time. The fact that hackberries are delicious, and taste like no other fruit you've had, is a fun bonus. 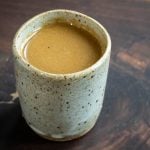 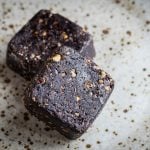 Candy bars made from hackberries, nuts and dried fruit. They may look small, but they’re dense and full of energy. Don’t be put off by the gram measurements here. As you can see, the bars are made from equal parts of all ingredients, and you can adjust the "crunchiness" however you want. An exact recipe is hardly necessary but I like having exact measurements for reference. Makes four one ounce “bars”.
Prep Time15 mins
Hydrating time15 mins
Course: Appetizer, Snack
Cuisine: American, Native American
Keyword: Hackberry, Vegan, Vegetarian
Servings: 4