This is the classic wilted spinach salad recipe with mushrooms and a warm bacon vinaigrette you've been looking for. This was on the menu at my first restaurant for years. I learned it from a chef from Italy. It's a fresh and healthy, low carb salad that doesn't get bogged down by thick dressings.

This salad recipe has followed me for a while, subconsciously. Yes it's just a spinach and mushroom salad, yes the ingredients (minus the hen of the woods) are not new in any way, shape or form, since every Perkins and Applebee's probably has a spinach salad with bacon dressing.

At the same time, it's a completely new salad that represents my growth as a cook, in three particular stages from when I was 17, until now.

The first time I made a spinach salad with "hot bacon" dressing it was at a steakhouse around my hometown of Willmar Minnesota called Melvin's on the Lake.

At Melvin's, everything for the salad came out of a bag or a jug, including the dressing: an opaque substance from Sysco that looked like wallboard paste with something only distantly resembling bacon in it. As you can expect, it tasted like the ingredients sound.

The second time I made the salad was working for a chef from Rome at Trattoria Da Vinci in St. Paul-it was a little better this time. Imported pancetta took the place of the jugged dressing, and the spinach was actually tossed with the dressing, as opposed to the dressing just being glugged on top.

Instead of topping it with sliced hard boiled eggs like I did at Melvin's, we grated the yolks like cheese, which I always thought was a fun touch.

We used red wine vinegar to de-glaze the pan too, part of what makes the salad taste so good. This time I ate the salad, it was delicious.

At my first restaurant I made the version I'm sharing with you here, with hen of the woods or maitake mushrooms. The difference from the other two salads from the past is that all of the ingredients are the best that I can find: good local spinach, high quality red wine vinegar, homemade bacon, local eggs, and or course local wild mushrooms.

It's the best version of the old salad I've had, and we regularly had people tell us it was not only the best spinach salad they'd had, but the best salad, period.

Well, except for one time a guy said his mushroom spinach salad wasn't "wilted enough", but he was a crochety old guy that complained about everything from the size of his coffee cup to the way the server described the dessert menu. 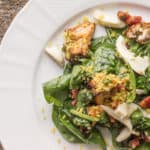 Hen of the Woods-Spinach Salad, With Bacon Vinaigrette