Do you like preserved lemons? I do. If you do too, you’ll want to read on, especially if you’re the type of person who likes an easy fermentation project.

I seem to crave Moroccan-style salted lemons when I don’t have any around. They can be hard to find if you don’t live in a big urban area with access to Middle Eastern markets. Making your own, while a fun experiment, takes months. So, a few years ago I had an idea for a workaround.

The best lemons come from my Grandmother’s tree in Arizona.

Instead of just burying lemons in salt, I thought why not ferment them? It turned out to be a fun kitchen hack that’s pretty darn close to traditional salted or preserved lemons. But, these come without extra salt you have to rinse or soak off. It’s also done in a couple weeks, instead of months, and, just like salted lemons, it’s also shelf stable near indefinitely. They make a delicious addition to savory dishes.

Depending on the fermentation process you use to make them, fermented lemons can also give you fermented lemon juice. The liquid isn’t indelibly salty as with traditional preserved lemons that are buried in salt.

The only real tricky thing to wrangle is the paradox of choice, because there’s a lot of different ways you can go about fermenting lemons. I’m going to go over the most useful methods I’ve found, and explain the differences and trade-offs between the two.

Lemons will ferment easily in a traditional brine ferment. To do it, take lemons and quarter them, put the lemons in a jar, and pour over a solution of 3% brine.

Weigh the lemons down with something (a clean stone is fine) and allow to ferment for two weeks, or until sour to your liking. This will make fermented lemons, but the residual juice in the lemons isn’t worth harvesting (at least for me) since it’s watered down.

Fermenting only the rind in brine

If you cut the flesh and seeds from the quarters of lemons, you can ferment the rind, saving the fresh lemon juice for another purpose. This also allows more lemon rind to fit into a jar, which will give you a higher yield.

The traditional method works, but fermenting under vacuum is my favorite, and a great way to preserve food. Vacuum fermentation means that as the ferment isn’t exposed to air, it’s basically impossible for it to mold. Using vacuum fermentation, I have never seen any sort of mold or kahm yeast develop.

The lack of air exchange in vacuum ferment means that the lemons, along with aroma in the rind are trapped together. This forces a marinating exchange of flavors that happens as the fermentation takes place.

These taste and smell and taste extra lemony. This is because none of the aromas have been lost to air exchange from exposing them to air. This might sound a little hokey, but it’s true. I discussed it in my appearance on Daniel Vitalis’s podcast Wildfed a few years ago in the episode “The Final Frontier of Food”.

With vacuum fermentation, the lemon juice hasn’t been diluted with water. This means it’s only a little salty, so you can also strain it and use it in cooking or for making condiments and dressings. It’s delicious spritzed on some fish or swirled into a sauce, vinaigrette or used anywhere you’d use fresh lemon juice.

Adjusting the texture of the fermented rind

One of my favorite things about traditional salted lemons is their tender bite. Fermented lemons won’t have the same soft chew of salted lemons at first, but it’s easy to get around.

To soften the texture to use as fermented lemons, I sous-vide the fermented lemons or steam them gently until they’re tender. If you’re putting the lemons in a stew like a tagine, you just can simmer it a bit longer until the lemon pieces are tender.

You can use fermented lemons in any recipe that would call for preserved lemons.

The North African stew is probably the best-known place where you’ll find preserved lemons. Other soups and stews especially complex things like curries can also work.

Adding a sprinkle of finely diced, cooked, fermented lemons will add a great lemony bite, artichoke dip is a good example. The chopped rind can also be mixed in things that will be buzzed in a food processor. Borani esfenaj with fermented lemon would be great.

Pan sauces, stuffings, etc. I worked at one place where we made a compound butter for steak made from blending preserved lemon, rosemary and black pepper in a food processor.

A Moroccan classic. In my book, I describe arguably the most heavily consumed dish of wild plants in Morocco. It’s a simple dish of cooked mallow, purslane, or a combination, seasoned with cumin, paprika, olives and preserved lemon. In short, just try tossing some finely chopped, cooked fermented lemon rind in with cooked leafy greens. 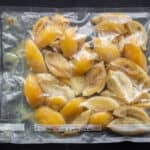 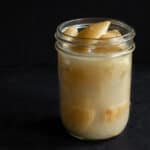