Here's a way to use up those dried black trumpet mushrooms that really showcases the mushroom itself-a rich thick puree, or coulis. Technically a coulis is a dessert sauce made from fruit, but I've used the term coulis to refer to any sauce that resembles a smooth puree for years, and I'm definitely not the only chef to do so.

The recipe here was inspired by the black trumpet coulis served at Chanterelle Restaurant in New York, run by David Waltuck (the restaurant is now closed). I find a puree of pure black trumpets to be a bit on the bitter side, so my version is tempered by adding some cultivated mushrooms to the puree, which tames the bitterness in the same way I talked about in my black trumpet-shell pea soup here.

After cooking some dried trumpets down with shallots, herbs and brandy and then pureeing, you get a concentrated mushroom bomb that has great potential for plenty of fun, and experimenting. Here's some ways I'd use it:

That should be enough to give you some ideas.

After trying out a number of ways of using the coulis, I found my favorite way to enjoy it was as a sort of condiment for a simple dish of protein and vegetables. It's much lighter than a sauce made from stock, and works really well with light, summer preparations when eating heavy food doesn't sound appealing.

The example dish above with poached bass and fresh vegetables I'm including here is great, but I encourage you to use whatever is on hand and fresh.

You can also use the puree to flavor Mushroom Mashed Potatoes. 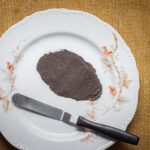