Nothings says a good morning like a bag of giant lobster mushrooms. Their size can be stunning, along with their heartiness against bugs. These cakes are probably my favorite lobster mushroom recipe.

I dry plenty throughout the year since it unlocks more of their aroma, but there are some other ways to concentrate their flavor. These cakes are a great method I came up with this year, for just that purpose.

Basically, one day I had a discussion with my line cooks about how just cooking at the stove Isn't enough. I expect them to be creative, experiment, and contribute to menu development, since it makes them more vested in the food, and also helps them learn.

A couple days later one of them came in early to play with some vegetables and pickles, one of the things he made were little cakes of shredded zucchini. That's when I thought of making these. When I make a cake of shredded vegetables, I salt them lightly beforehand (a little technique I learned from Julia Child).

The salt allows the vegetables to release water, which would make the batter loose. Afterwards I squeeze out the water, season the the vegetables with salt, herbs, egg, and a little bit of a binder like flour.

Getting to the point, the bulk of a lobster mushroooms weight is made up of...water. Removing some of that water, like when the mushrooms are dehydrated, concentrates their flavor. Salting shredded mushrooms, then squeezing out the water, will have a similar effect of concentrating their flavor.

Needless to say, these crispy fried mushroom cakes are fantastic. Try them next time you have a bunch. 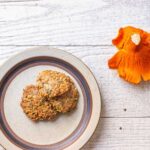 You can vary these any number of ways, like using a blend of big mushrooms like firm boletes or polypores, and the herbs can be tweaked to use what you have on hand, adding a little grated parmesan or ground, dried lobster mushrooms wouldn't hurt either. The proportions in the basic recipe are solid though, and won't let you down. They're excellent served with eggs, a little reduced tomato sauce, flavored mayonnaise, a lemon wedge, your favorite condiment, or just straight out of the pan.