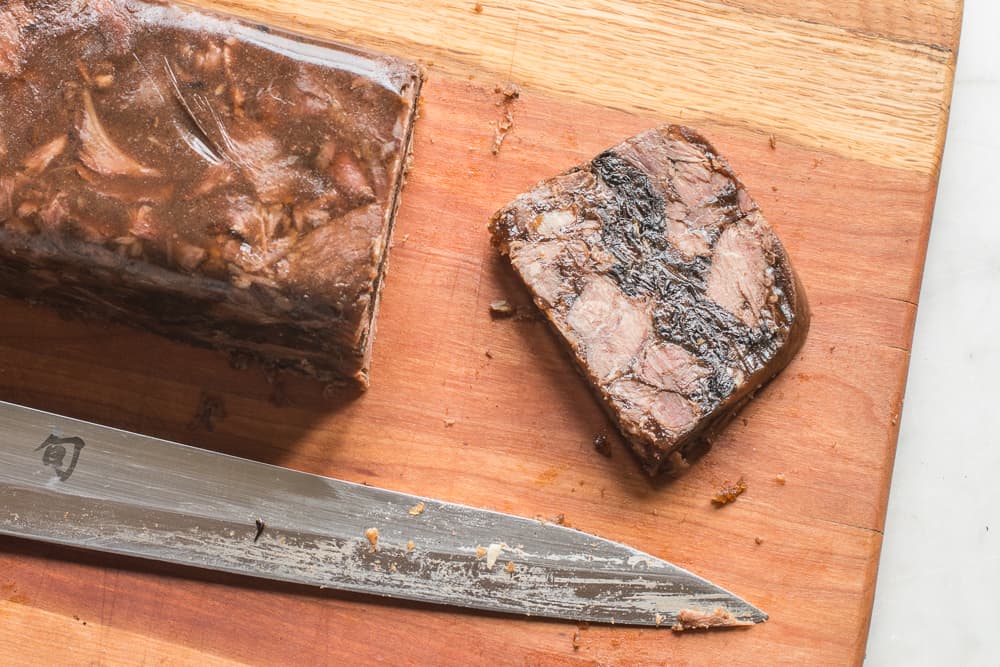 I've created more versions of pates and terrines than I can count, and some of them blur together, but one sticks out above the rest: the beef neck terrine.

It was a crowd favorite, but also burned in my mind as one server repeatedly asked me to show her where the fruit was. She was a vegetarian, and had been describing the terrine as  "the beef nectarine" to guests, which, during the heat of service, was always a great way to get me angry.

Some of the line cooks coined my charcuterie board "an amusement park of meat", and it was. On any given day there were around 8-15 different types of homemade cured meat, the exact number of which I'd dial up or down depending on if the cook working the station that day had angered me lately. 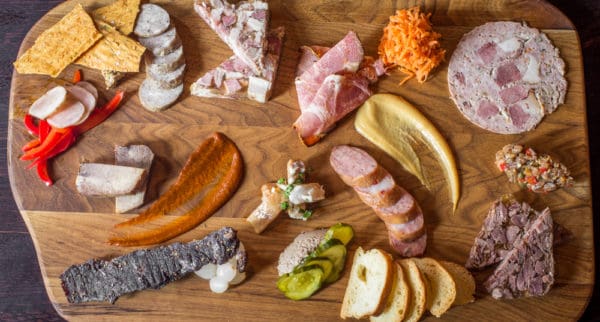 On any given day there might be torchons of butter soft foie gras scented with cognac and orange served with preserves, whole de-boned chickens put back together in the almost Frankenstein galantine: a perfect cylinder of pounded breast wrapping an emulsified mousse of dark meat flecked with duxelles, all wrapped in the birds skin. 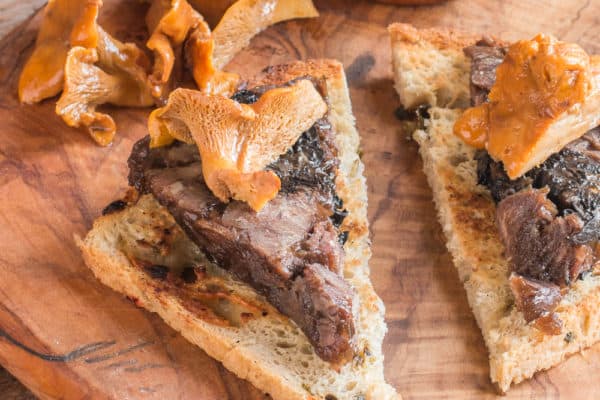 It makes a great open faced sandwich or appetizer too.

All of those were good charc board fare from a chef that makes everything in house, but none of them, at least from a guest feedback standpoint, could hold their own against the anchor of the board, which was a terrine I developed from meaty beef neck bones, a lowly cut made for stock. 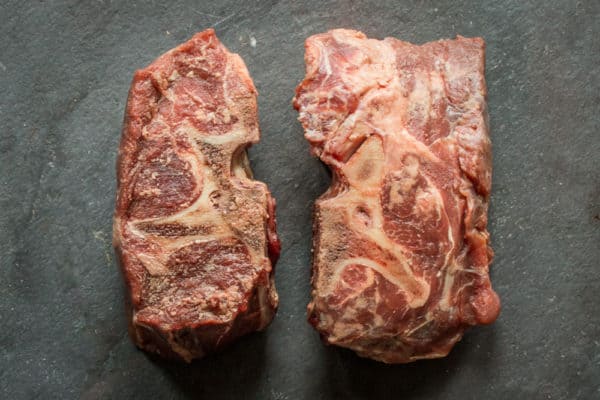 Beef neck bones. Some can be sold with more meat attached, but asking for soup bones gets you meat on the cheap.

I started getting meaty neck bones in for prime rib jus and, after noticing how much meat was left on the necks after cooking, I wanted to make a terrine en gelee modeled after headcheese, and a shank terrine my friend Mike, a chef and butcher from New Zealand I used to work with used to make. It ended up being the most popular piece of charcuterie I've ever made.

It's popularity wasn't due to the fact that it took 3 days to make (when it was done properly), or the high quality beef necks I used to make it, or the subtle ways to build flavor I tweaked gently with each passing month, like adding mushroom trim to the braising liquid, scenting it with a rosemary branches burned over a fire, or upping the quantity of wine. 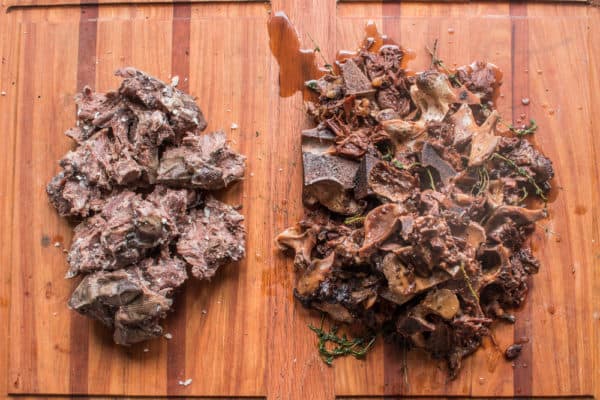 There wil be a lot of trim and scrap. Alot. On the left is the usable meat.

The secret was it was approachable to everyone, because each bite tasted like the pure essence of beef stew. It tastes like comfort food. Not everyone is ready for bison tongue (I used to just call it ham depending on what I thought each table could handle) or headcheese or liver, but everyone likes beef stew.

Once you get the technique of reducing stock to the setting point, you'll understand how to play with this. Any meat cooked until soft can be molded en gelee. I added directions for including the black trumpet inlay pictured, but it's fine without, too. I should also mention that the method of making this is identical to classic pork headcheese, so if you can make a neck or shank terrine, you can make that, too. 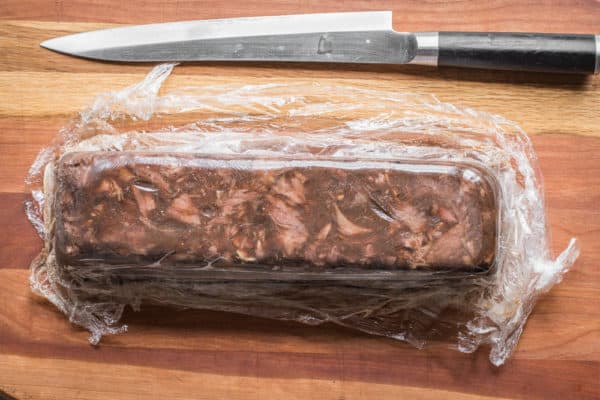 Lining a terrine with cling film makes unmolding a breeze.

The most forgiving terrine

Here's another tip: if you mess it up and the terrine falls apart or crumbles when you slice it, or if it needs extra seasoning, you can remelt it, strain the liquid and cook with a piece of gelatinous meat and some extra water (or add gelatin), mix the reduced stock back with the meat and repack it. It's very forgiving. It's also excellent with prepared horseradish, on a sandwich, cut into cubes as a canape, or eaten as an open faced sandwich. 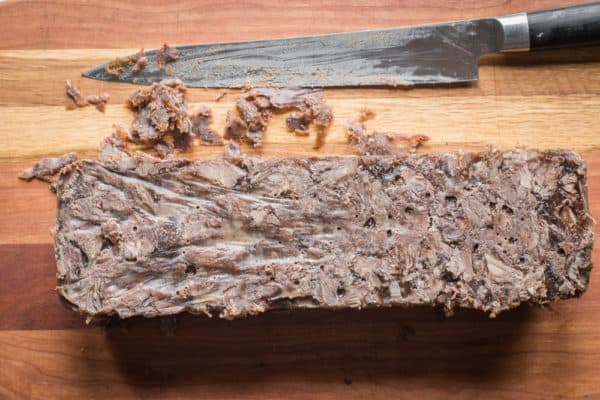 After unmolding, I clean up the top (technically the bottom) since any residual fat will rise as the gelatin pushes it upwards. 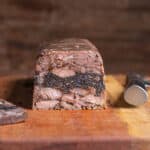 A rich terrine made from scrap beef meaty neck bones. One recipe will yield one 6-cup terrine, but it can be halved easily.

Black Trumpet Mushroom Inlay (optional)
25 grams dried black trumpet mushrooms (two generous handfuls, or ¾ cup lightly crushed dried mushrooms)
2 tablespoons flavorless cooking oil
1 teaspoon chopped fresh thyme, or more to taste
Kosher salt Rehydrate the trumpets for 15-20 minutes in water just to cover. Strain the water and add to to beef neck cooking liquid. Meanwhile, coarsely chop the trumpets and sweat in the oil, seasoning with the salt and thyme. Don't brown them, just sweat and stir to warm them and distribute the seasonings. From here the trumpet inlay can be made ahead of time. When packing the terrine into the mold, lay down half of the beef, put the trumpets in the middle, then put the rest of the beef on top.

END_OF_DOCUMENT_TOKEN_TO_BE_REPLACED 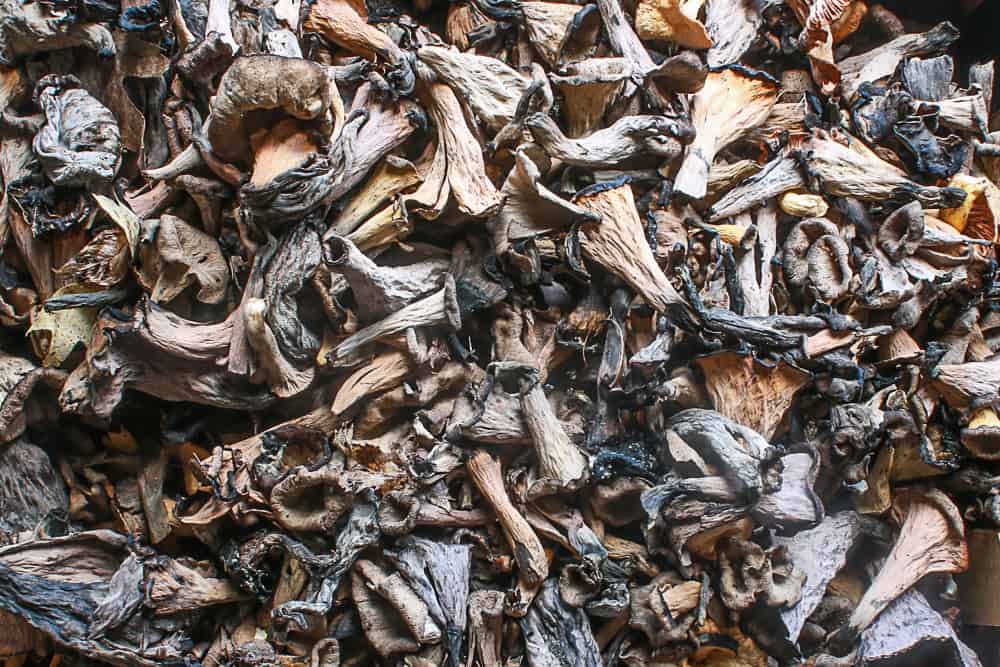