Here's a great way to use up those aborted entolomas. Fra-diavolo is a classic Italian preparation, it means "devil style", and I definitely like it spicy. You could really make anything you want, add some chili and tomato, and call it fra-diavolo. There is something special about pasta though.

I'd made plenty of spicy pastas in restaurants by the time I came to the Twin Cities, but at the old Il Vesco Vino on Selby avenue, we made one with linguine, big hunks of tomato, and seafood. Shrimp came with the basic portion, but for a couple bucks more you could add a few nice hunks of u/10 sea scallop, which was definitely worth it. It was one of the most popular dishes on the menu, and it stayed on right until the bitter end of the restaurant's demise.

With the shrimpy texture of the aborted entoloma, I knew I wanted to try using them in a dish like this when their season came around. The sauce itself is simple, some garlic, canned tomatoes, wine and chili flakes. Since there are only a few ingredients, you need to make sure you use quality stuff-nice imported tomatoes and a great dried pasta are really important. You also need a some know how of how to treat entolomas to make them taste good too.

A deep, preliminary browning of the mushrooms is crucial to this dish's success, and really makes the difference between a stellar pasta and a mediocre one.

All by itself, this is a spicy vegetarian pasta with mushrooms, but if you have a couple extra bucks, try throwing some shrimp, bay scallops, or whole mussels in it. There's something about the way tomatoes marry with the juice the shellfish give, the heat of the chili and how just the right amount of butter rounds everything out at the end. 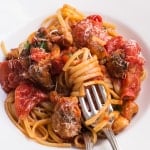 Serves 4 as an light entree. Some rapini or a bitter salad would be great alongside.
« Classic Pork Headcheese
The Forager's Guide to Red Chanterelles »