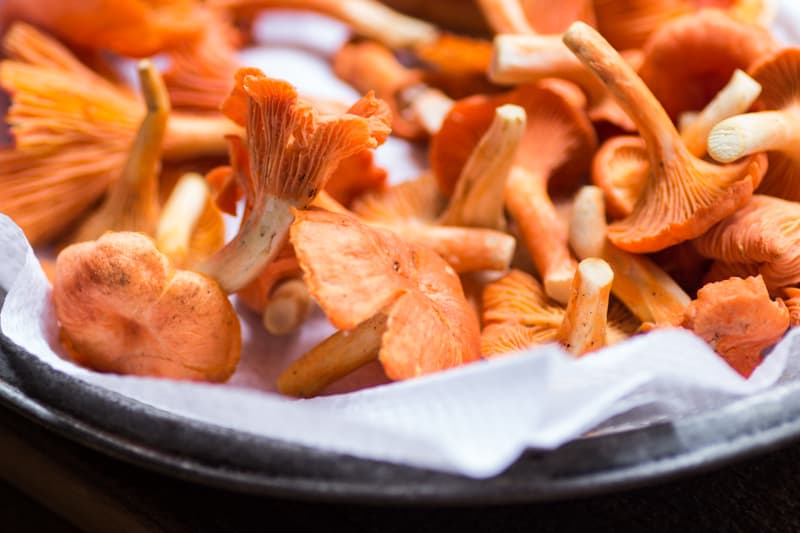 One of the most exciting things that happens for me is discovering something that I haven’t found before. This year, one of those things was red chanterelles.

One day I got a picture message from an old coworker, and I was shocked to see a big basket of what looked like red chanterelles. I didn’t think it was possible-I hadn’t ever heard of them before in the Midwest.

I told my friend I’d do anything to get my hands on some to play with. He told me he’d see what he could do, but the person that had picked them lived a couple hours away.

A day or two later, I got an online message from someone around the St. Cloud area in Minnesota requesting an I.D. They shot me some pictures of the mushrooms, and sure enough, they looked to be the same species that my friend’s buddy had found. Now I was really interested, how on earth could I have never found these before?

The next week, I went on a little hike on a farm in Wisconsin. We were in an area with mixed hardwoods, with plenty of oak, maple, and aspen-the same type of habitat I hunt golden chanterelles in the same area. On a large slope I started to see some lobster mushrooms and dried up golden chanterelles (their season was over by this time in August). After picking a couple lobsters, I noticed a few pink mushrooms hiding under the duff. Could it be? 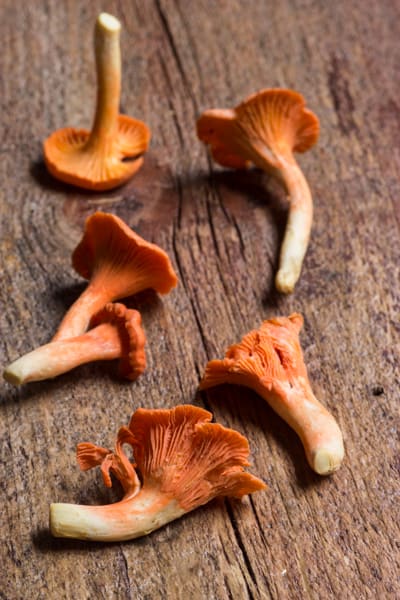 I picked one up and noticed the tell-tale chanterelle veins under the cap, running down the stem. They had the scent that anyone who’s hunted chanterelles or black trumpets will know too-they, and most of their related species (hedgehogs excluded) have a very similar aroma.

That night, we went to a local brewery outside Menomonie Wisconsin for a couple drinks. I decided to walk down the dirt road since it was still light out, and because there was plenty of oaky looking, open woods across the street. Out of the corner of my eye I spotted more. More oaks and dead golden chanterelles, and more of the red guys in their prime.

The next day I brought them home and played around with them in the kitchen. Here’s how they cooked up:

Sauteeing in butter and freezing is a decent way to preserve these.

Heres some recipes specifically for chanterelles, or places they could be substituted. My advice: the first recipe you make should be mushroom conserve.