Wild plums are in season right now in the Midwest, and this ketchup is one of my favorite wild plum recipes.

Seven years ago, I put up a recipe for ketchup made from wild plums (Prunus americana or nigra will both work, as well as any common plum or stone fruit you like).

It worked, but, it was from the days of my cooking with wild plums where I was still assuming I could treat them like regular plums, meaning that I used both the flesh and skin of the plums.

Wild plums are a completely different animal from plums most people are familiar with. If you've tasted Prunus americana, you'll know that the skins are tough, and very tannic. So tannic.

While the skins of the plums gave the sauce an attractive color, the finished product still had more tannins than I would've liked.

A few years ago, inspired by cooking techniques from the Caucuses, I started trying out different methods to extract the pulp of the plums in an attempt to mitigate the tannins as much as possible.

I use different methods depending on how I'm feeling, but baking, steaming, or freezing to soften them all work, allowing you to extract the pulp without cooking them with liquid that quickly transfers the tannins from the skins into whatever you're making.

Reworking the wild plum ketchup has been on my list to do for ages, so I'm finally giving it a fresh coat of paint and updating it with the newer version that is far less tannic.

As a trade-off, the finished sauce won't have the bright red cast of the original one, but it also doesn't have the pronounced tannins, and, if you know the puckering wild plum punch I'm talking about, you'll know that's a good thing.

The original version the sauce is based on was one of my favorite condiments my former chef, mentor and friend Chef Lenny Russo used to keep on regular rotation at Heartland Restaurant in St. Paul (I'm pretty Chef prefers the word catsup to ketchup too, for what it's worth).

It's an addictive, slightly spicy, sweet and sour sauce that is good on all kinds of things. Rumor has it Chef even served it with French fries during his tenure at W.A. Frost in St. Paul, or so I've been told.

Mostly, it's a sauce I use with grilled meat, especially chicken and pork, but I also remember one of my old co-workers on the line serving it with fried cheese curds, as well as cheese and charcuterie plates, which should tell you something about it's versatility.

I love condiments and sauces as most people do. But, one of the best parts about this is that it's a non-jam or jelly product of wild plums that's shelf-stable, can be water bath processed and put up for the cold months, and, most importantly, isn't aggressively tannic.

The other two sauces I forced people to taste repeatedly were the ramp leaf steak sauce and mushroom chili crisp, both of which made it into the book, and are also good, but are stronger tasting and/or relatively spicy, at least for Midwestern palettes. If you have the book, make a note of those too.

If you have some wild plum trees near you, and still have plenty of jam bumping around in the pantry from last season, give it a shot.

There's some detailed notes in the recipe to take a look at too, most important being the vast difference in size of wild plums, which affects the yield of pulp, making the recipe by nature flexible, and open to some interpretation. Lastly, don't forget that the spent skins and stones leftover from making the plum coulis make a great fermented fruit scrap vinegar. 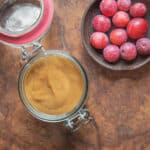 A sweet, sour, and spicy condiment made from American wild plums. You can use it anywhere you'd like a sweet and sour sauce, or glaze. It's particularly good with chicken and pork. Makes about 4 cups.
Prep Time30 mins
Cook Time30 mins
Course: Condiment
Cuisine: American
Keyword: Fruit Ketchup, Wild Plums
Servings: 10

Wild plums vary in size Prunus americana can vary wildly in their size, which explains the range of weight needed to get 1 qt of finished ketchup here. I’ve found wild plum trees with very large fruit can yield nearly 50% more puree than smaller wild plums, so, depending on the size of your plums, you may need to adjust a bit here and there. If your plums are small, use 6 lbs of them for the recipe. If you're plums are larger with more flesh, use 4 lbs.  Substituting other stone fruits  You can substitute just about any other stone fruit near you to make this. peaches, plums, apricots and nectarines can all be used. If you'd like to use a different stone fruit, you can substitute 6 chopped cups of stone fruit of your choice for the weight of wild plums in the recipe, skipping the roasting portion of the recipe as it's only needed for wild plums with tannic skins.  Scaling the recipe  This will make 1 quart, but is scaled (and tested) from a restaurant batch that made a gallon or so. It scales well and is forgiving, so you can make as much or little as you like.

Foraging and Cooking with Wild Plums