What's golden brown, crispy and delicious? Venison trotter cakes. Almost like a meat-filled tater tot, trotter cakes or cromesquis as they might be called are a classic French pork trotter recipe I've adapted to venison here.

Typically cromesquis are made with pork, which is how I was taught to make them by my friend. It was a recipe from his time as sous chef to Dan Barber at Blue Hill at Stone Barns. Contemporary chefs like Ferran Adria and Grant Achatz have served versions of them too.

Besides meat, you can also make cromesquis from just about anything. Traditionally they're made with a salpicon, which is just diced ingredients bound with a white sauce such as bechamel. Caul fat and salt pork are often used too.

If you've made classic pork headcheese, you'll be familiar with how meat picked off the bone gets firm braising, picking and chilling. Trotter meat is basically a mass of gelatinous tissue, and, just like headcheese meat, once it's chilled it's solid as a rock.

To prepare the meat, simmer a pork trotter or a couple venison trotters until the meat is falling off the bones. Cool it room temperature, remove all the meat, fat, and connective tissue and mince it as fine as possible.

To make the cromesquis, chill the finely minced, cooked trotter meat. When it's firm, cut the meat into cubes and bread with flour, egg and breadcrumbs and deep fry.

Warming loosens all the collagen that keeps everything all together, turning it into a decadent, crispy morsel that no one has to know came from a deer foot.

What to call them

Trotter cake" isn't as romantic sounding as cromesquis, but you can call them whatever you want. Deer foot tater tots have a certain ring to them. 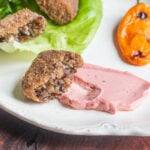