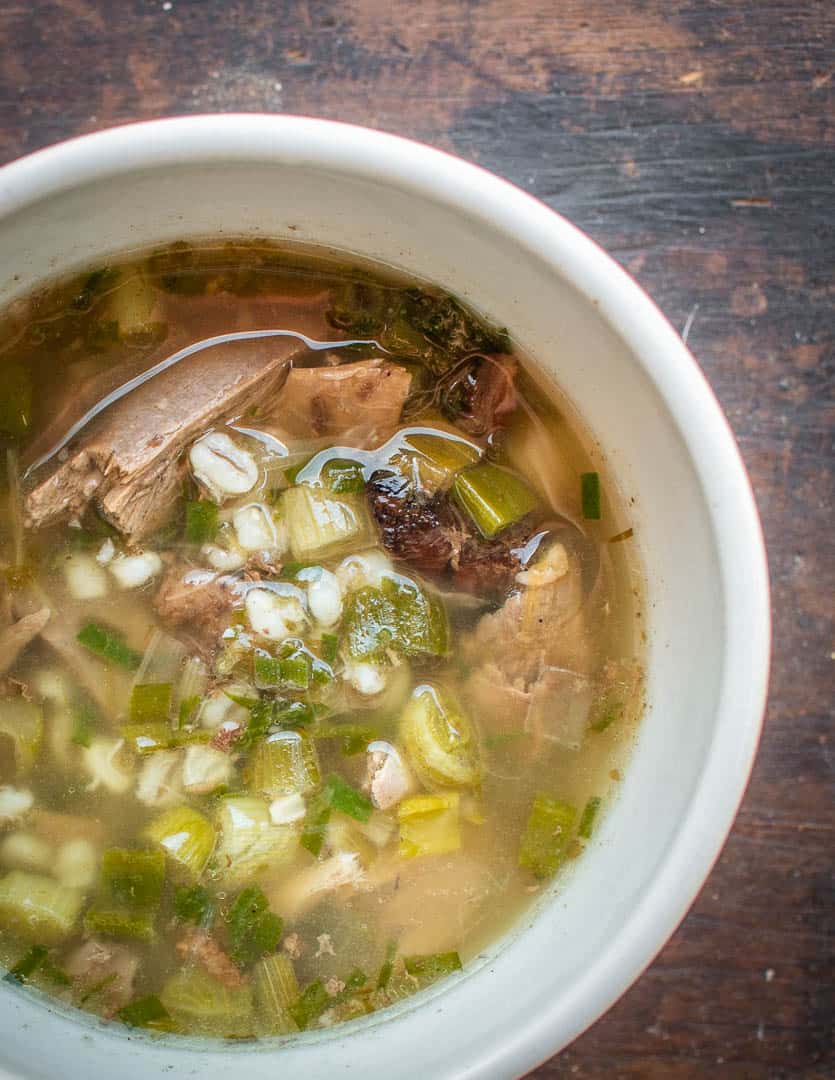 Sumerian pigeon soup is a love letter on pigeons being worthy for the table, and an example of how I get inspired by historical texts. I like variety, and my collection of food references spans everything from Greco-Roman Apicius, Archestratus, and Byzantine Geoponika, to the more modern A Discourse of Sallets and The Little House on the Prairie, to name a few favorites. I love all my old books, and each is a useful lense for looking at food in it's own way. 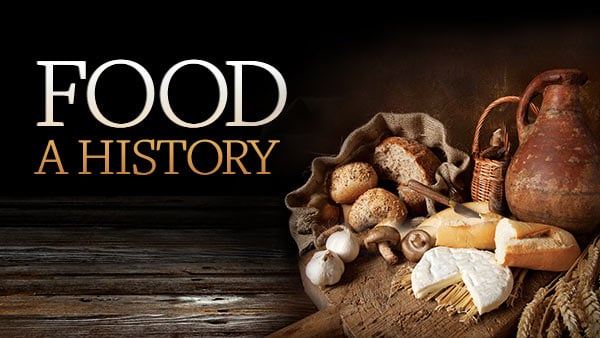 Professor Ken Albala's Food in History is one of my favorite Great Courses. Link to the course at the bottom of this post.

Our pigeon soup recipe isn't from any of those books, it's not even from a book at all. The original dish is from one of the most ancient food references on the planet: a 4000 year-old Sumerian cuneiform tablet I learned about from Professor and Author Ken Albala in his consumate addition to the Great Courses: The History of Food - Understanding Food Culture and History. If you have Audible, just download it and thank me later—it's great to listen to while you cook dinner. I think I'm on my 4th listen. Here's the recipe I wrote down from Professor Albala, direct from the tablet: 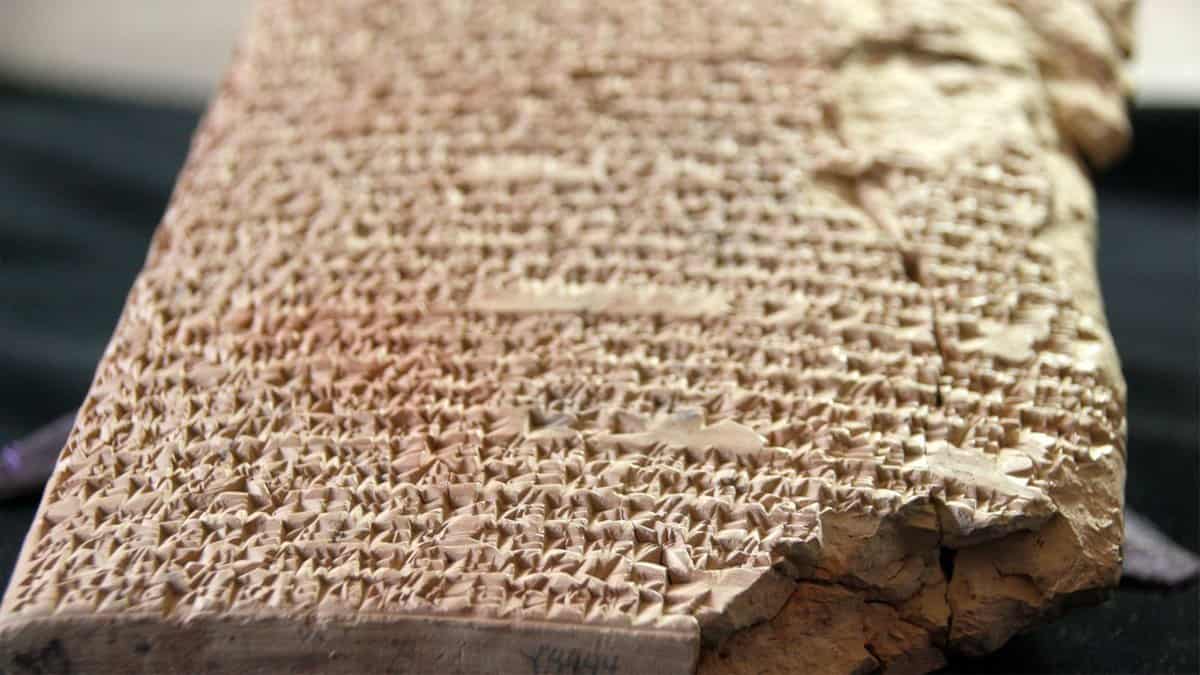 “Split the pigeon in two, other meat is also used. Prepare water, add fat, salt to taste, breadcrumbs, onion, samidu (possibly semolina) leek, garlic. Before using, soak these herbs in milk and it is ready to serve”. 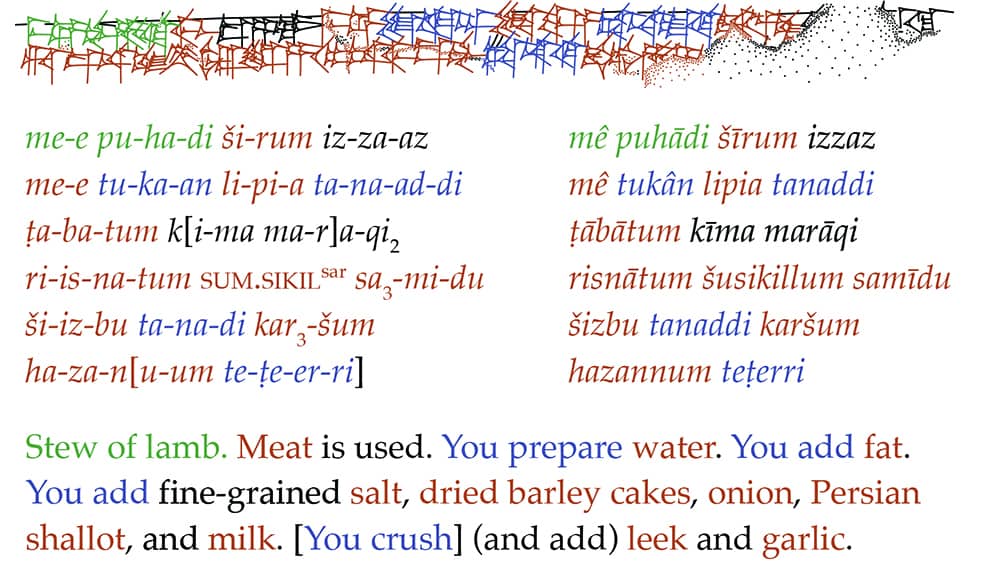 A similar translation from the tablets for lamb soup. Credit: Laphams Quarterly.

How I create recipes inspired by old books 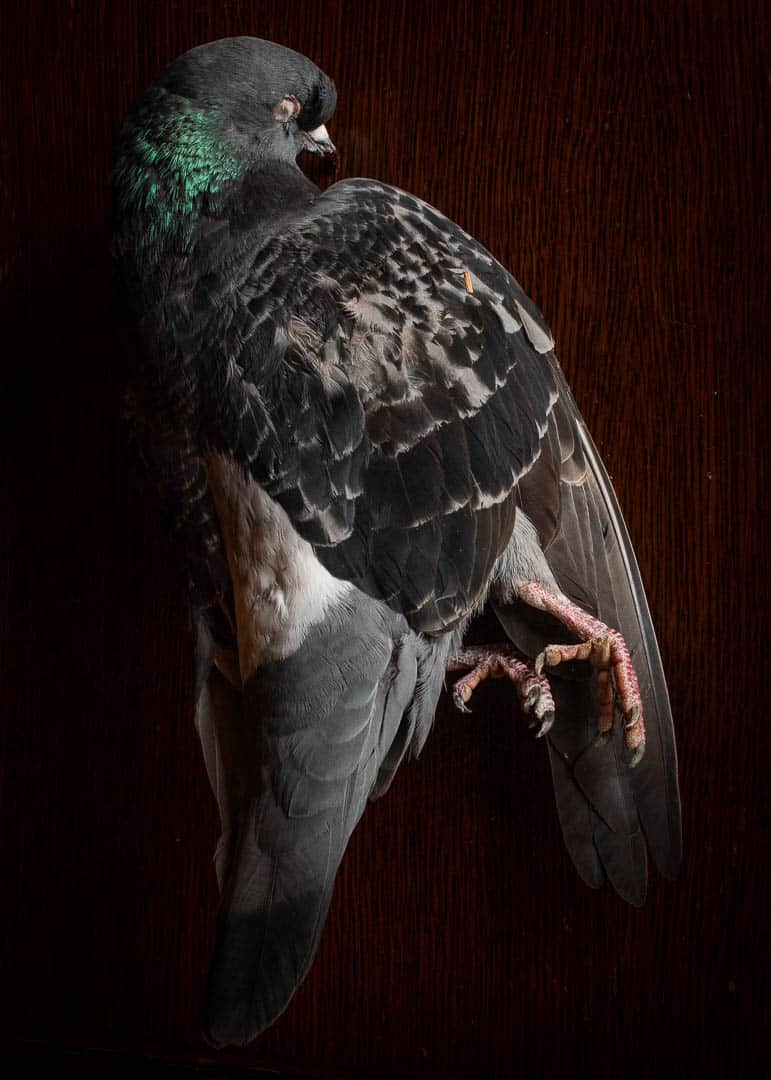 Pigeons are rats of the sky to some. I think the patterns in most feathers are beautiful, no matter the bird.

What's helpful here, what I'm trying to share with you, is an understanding of how the constraints you apply to your cooking and how you select your ingredients can transport your tongue to different times and places. A yellow onion grown in the United States is going to taste the same as one grown in China, more or less, it's the subtlety of the supporting ingredients and techniques alongside them that make dishes made with them that can steer a dish in the direction you want. 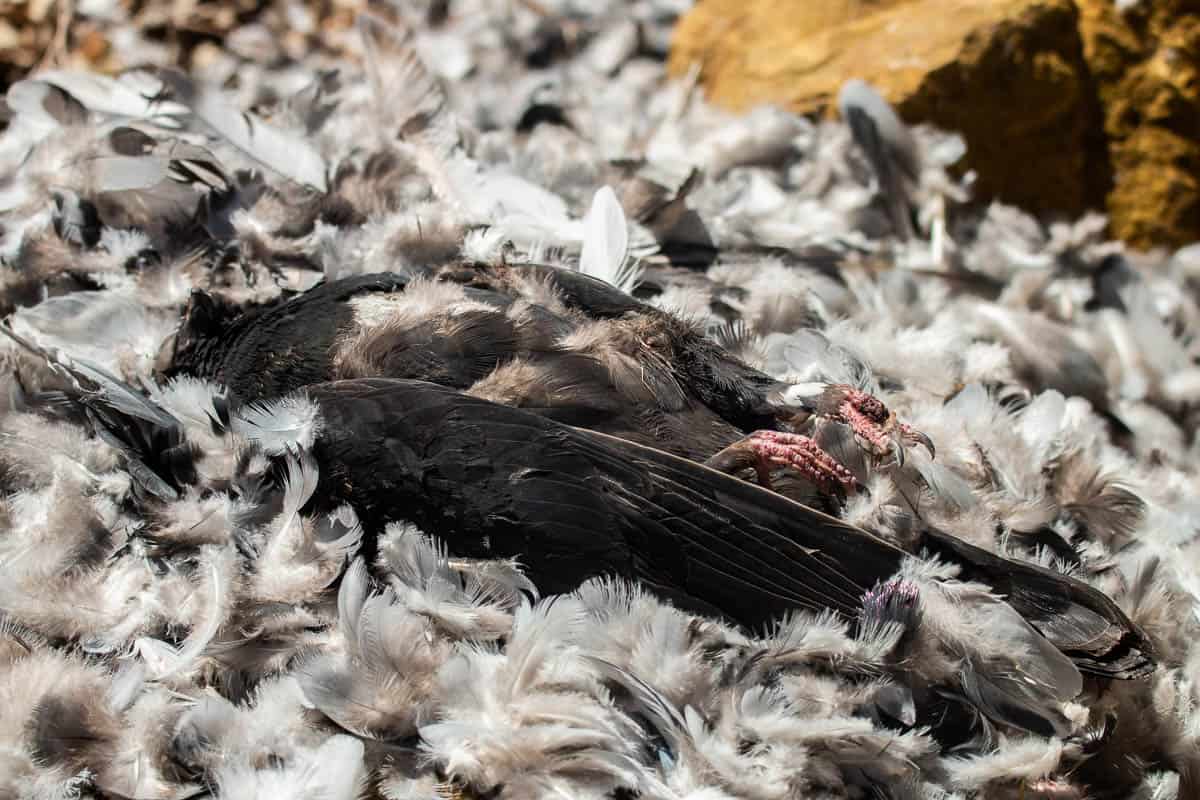 Plucking takes time, but it's something I typically do. 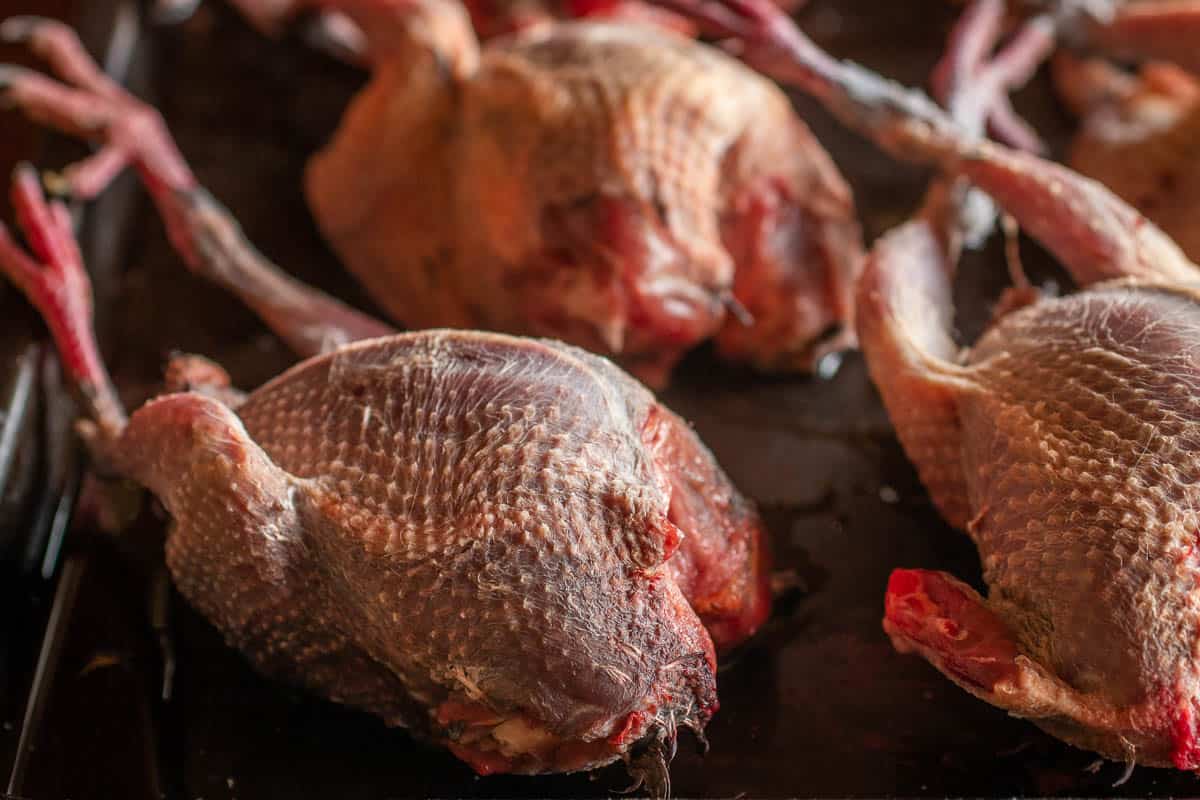 Plucking pigeons is easier than birds with down.

What I often do for conceptual dishes like this (hyper-local food is another example), is make a recipe that will taste good, applying constraints I think are appropriate for the time, region, or whatever I'm trying to showcase. Boiling a whole pigeon with some onions and then adding some unknown herbs soaked in milk doesn't really excite me. But, adding an ingredient or two cooks would have commonly used at the time, and tweaking the technique a bit so I know what the result will be is a good way to hedge the bet.

Historical fun aside, the basic recipe is a great primer for making simple stew from whole pigeons 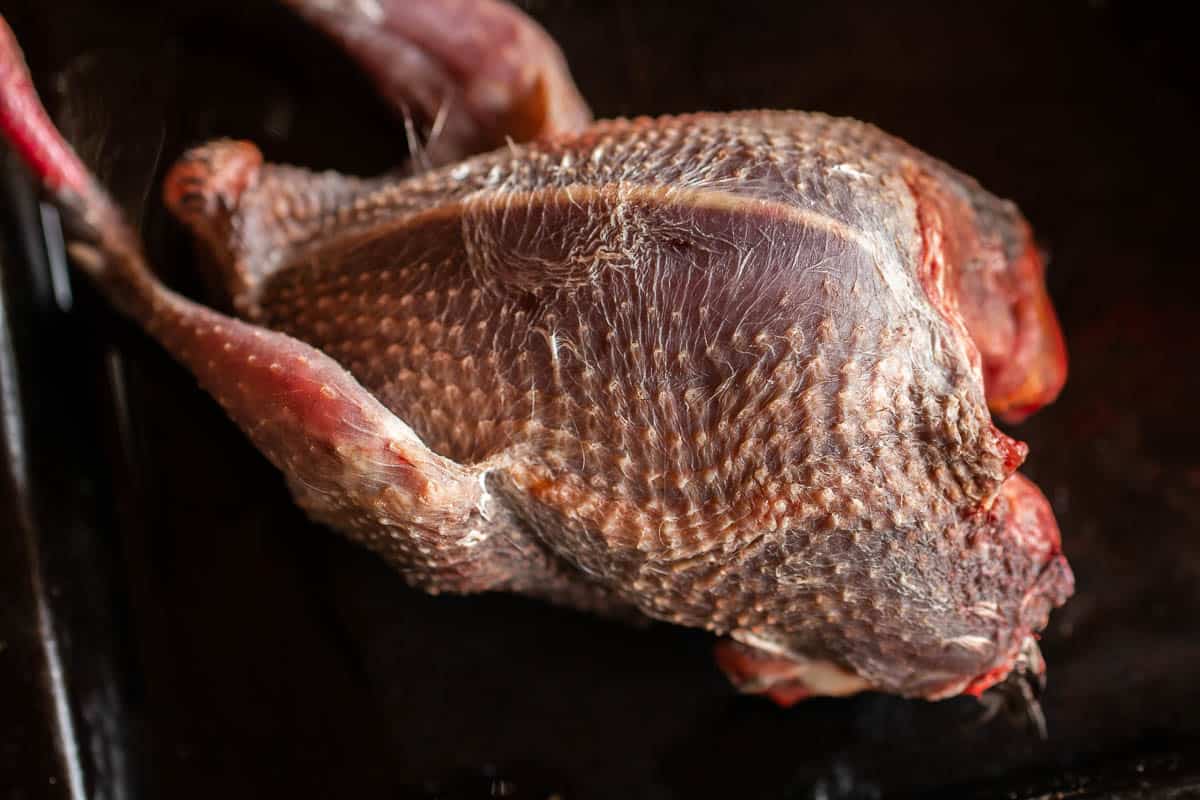 Less is more, and unnecessary ingredients can muddy a meal. For example, the other day I was showing someone how I make Indian saag with shrimp, and they asked if they could season the shrimp with soy sauce. I quickly told them soy sauce was not an option, and we used salt, pepper and melted coconut oil instead. Little things matter. Here's some bullets on what I did here. 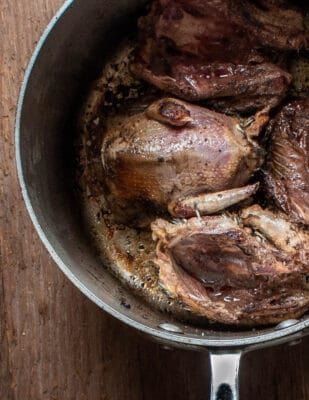 I brown the carcasses to deepen the flavor of the broth. 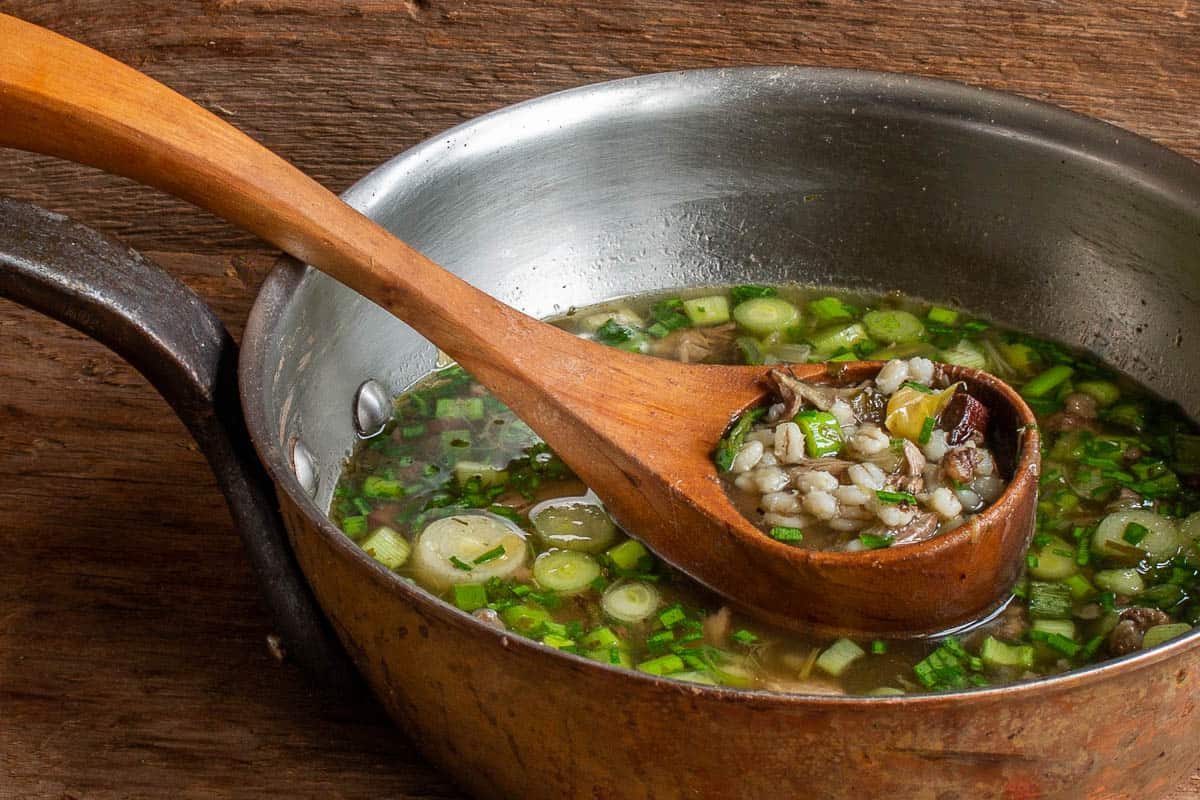 I add a handful of fresh scallions at the end to keep some of their color and bright flavor.

The importance of onions

The Fertile Crescent, with it's flood plains and rich flat lands had the perfect growing environment for leeks and alliums, and they're omnipresent in many of the dishes I read about. Onions were worshipped as symbols of eternal life in Egypt, and they're the backbone of the soup besides pigeon or meat, so a big takeaway of the concept here is to use a big variety of onions—whatever you have. 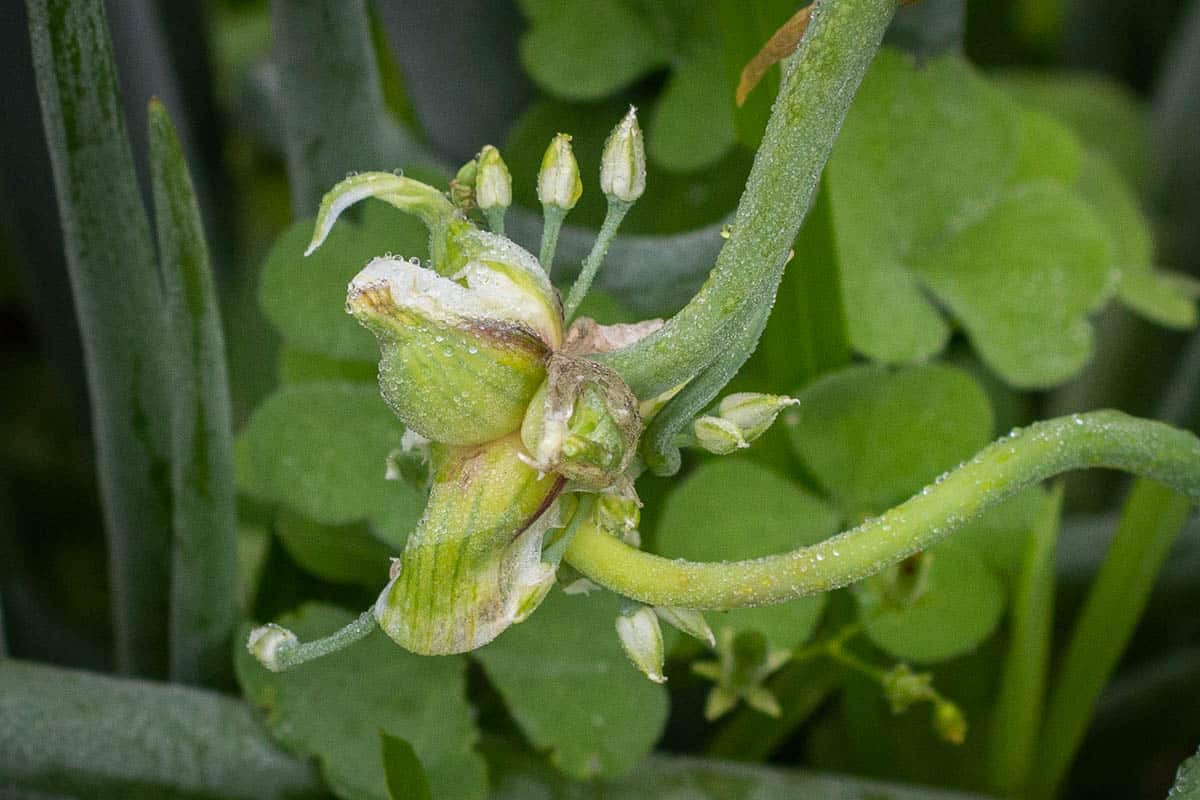 Egyptian walking onions probably weren't traditional, but you could definitely use some here. I love these.

Fun aside: I don't see enough evidence to assume "Egyptian" walking onions were a cultivar originating from Mesopotamia, but Allium kurrat (Egyptian leek) is, and should date back at least 2500 years there. 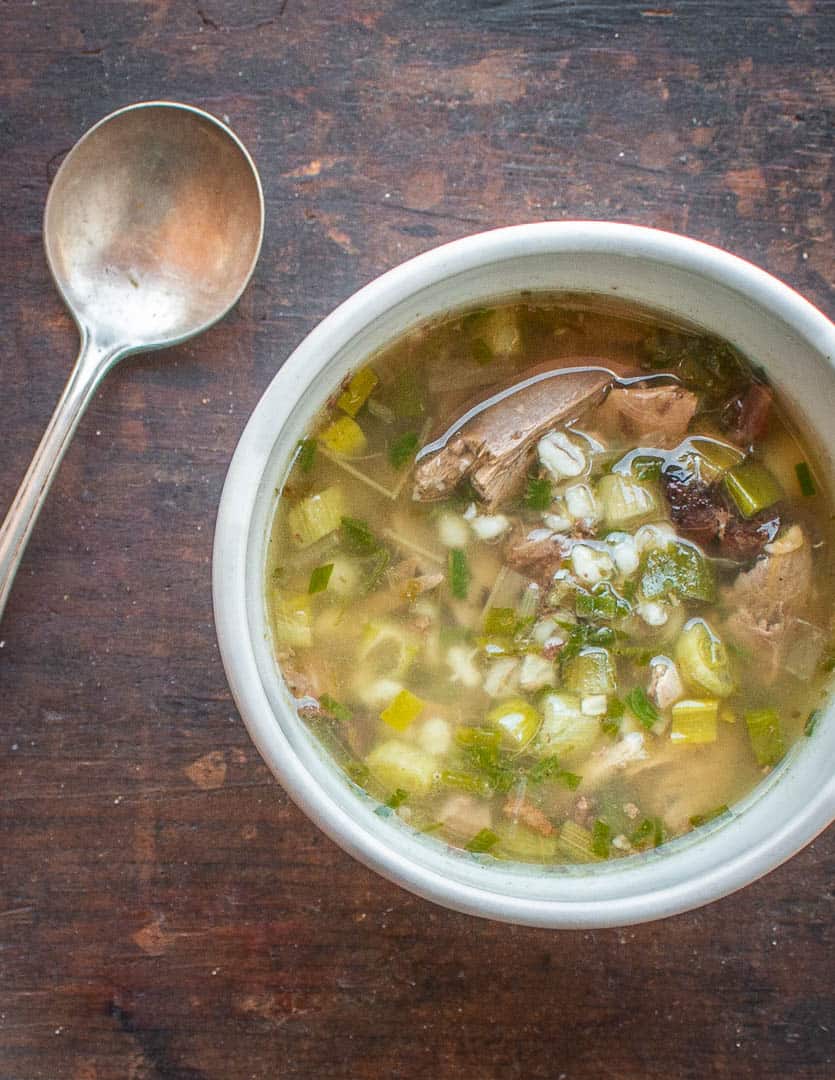 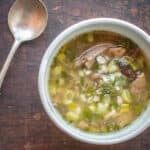 Pigeon soup inspired by cuneiform tablets from ancient Mesopotamia. It's a good primer on how to make soup out of a pigeon. Serves 4 as an entrée
Prep Time30 mins
Cook Time2 hrs
Course: Appetizer, Main Course
Cuisine: Egyptian, Sumerian
Servings: 4

Alliums (just use as much variety as you can)

*Use skinned pigeons if it’s easier here, especially since you’ll be discarding the skin. Just be careful not to brown them to hard since it could dry the meat out.
*You can streamline this by adding the barley to the finished broth and allowing it to cook while you pick the meat from the pigeons, although the broth will be less clear.

Food in History on Audible