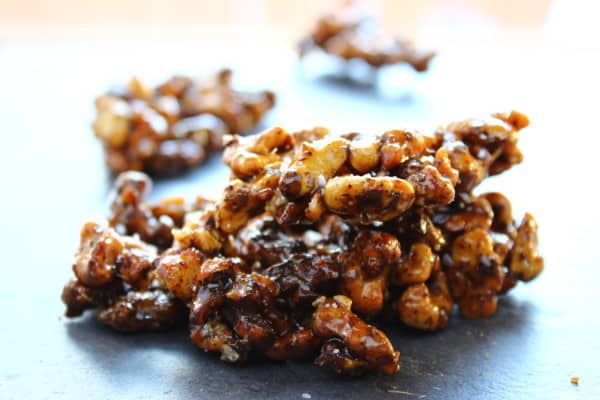 If you like peanut brittle, you’re going to love this stuff….

After the unfortunate closing of Il Vesco Vino restaurant in St. Paul, I was left without a job, wondering where the heck I would go. As usual though, my Italian training served me well. I found an add on craigslist and did a quick stage (where you work for free in a kitchen for a day) at the D’amico flagship restaurant: D’amico Kitchen, formerly D’amico Cucina. The kitchen started to get busy during my stage, and the executive chef tried to test me a bit by yelling at me to get some fregola sarda, thinking I wouldn’t know what it was. When I returned seconds later with a bag of the giant Sicilian cous-cous, he hired me at near salary to run their pasta station: easy peasy.

The restaurant was a pretty swank spot, it’s in the Chambers Hotel where all the celebrities stay when they came into town for concerts and what have you. Prince came in regularly and would bring in his own serving entourage; our servers couldn’t talk to him. Typically he ordered something drab off menu like steamed chicken and vegetables, meh. I remember Wolfgang Puck stopping by too and touring the kitchen one night, he bought us all drinks, which is always appreciated.

During service, the kitchen was projected online through webcams, and also projected on the side of the entire building via projector, for about 6 hours every night. I remember my grandpa telling me he would watch service occasionally online, which was a cool way for him to see some of the busy antics of a professional kitchen. It was fun at the time, but now I’m glad I don’t have to worry about cameras turning on at 5 o’clock for people to watch me cook incognito.

I was in charge of the pasta station, but of course I needed to see the menu and be cross trained just in case somebody got sick and I needed to fill in for them. The garde manger station, which includes salads, hot appetizers and desserts is not my favorite station to work since it does not have as much hot, in-your-face action as a typical saute, pasta, or grill station, but I have a sweet tooth, and need to stop by to have a snack once and a while. They had this chocolate cake dessert there, the cake was alright, but it had these little candied hazelnuts on it that absolutely blew my mind. Crunchy, salty, sweet, they hit all the right notes. I got scolded more than once for snatching the candied nuts out of their mis en place.

Eventually I just asked one of the pastry chefs for the recipe; she refused to give it to me. No matter how many times I brought it up, she declined. This only annoyed me, and I made a point of sneaking more of nuts, just to stick it to her a little. Eventually I left D’amico, and was recruited to be part of the opening culinary team of a new, much more exciting St. Paul restaurant. I didn’t forget those nuts though!

It took a couple months of searching for recipes and comparing, but I finally found the method they had been using to make those stinkin nuts. Afterwords, I played with the recipe, (which is incredibly easy) and found I could use it to candy any nut in the same way. After I started to use it on other nuts, I began to get bored with original recipe after eating them non stop for months on end. I started to add different things, spices, hot chillis, different sugars like agave or honey, combinations of sorghum, barley malt and mollasses. I  made piles of them, and gave the experiments out as presents and gifts.

I’m telling you, every single time people eat these things for the first time, they fall in love, just like I did.  I’m using black walnuts here, but you can use any nut or seed you like, the proportions are always the same, although using black walnuts or hazelnuts  which have been rubbed of their skin make a particularly delicious croquant. Since there are only a scant few ingredients, it’s really important to use very high quality stuff, get the largest nut meats you can afford, or care to buy. Essentially this is the same method that many candied nut sellers will use at state fairs, where they have huge rotating drums that constantly stir the nuts and sugar to promote even cooking. All I have done is adapt it for the home kitchen Here’s the recipe I recreated, with a couple fun variations to try after you have made the first one. 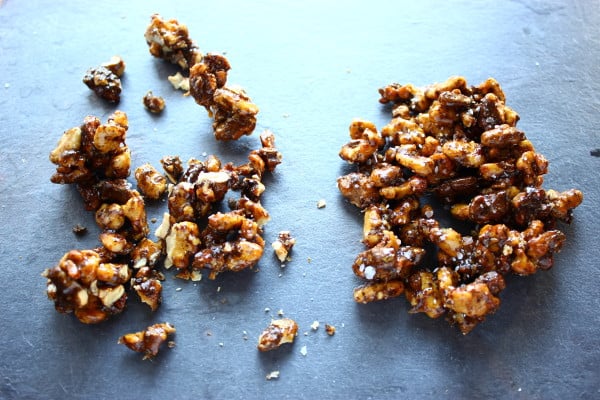 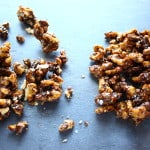