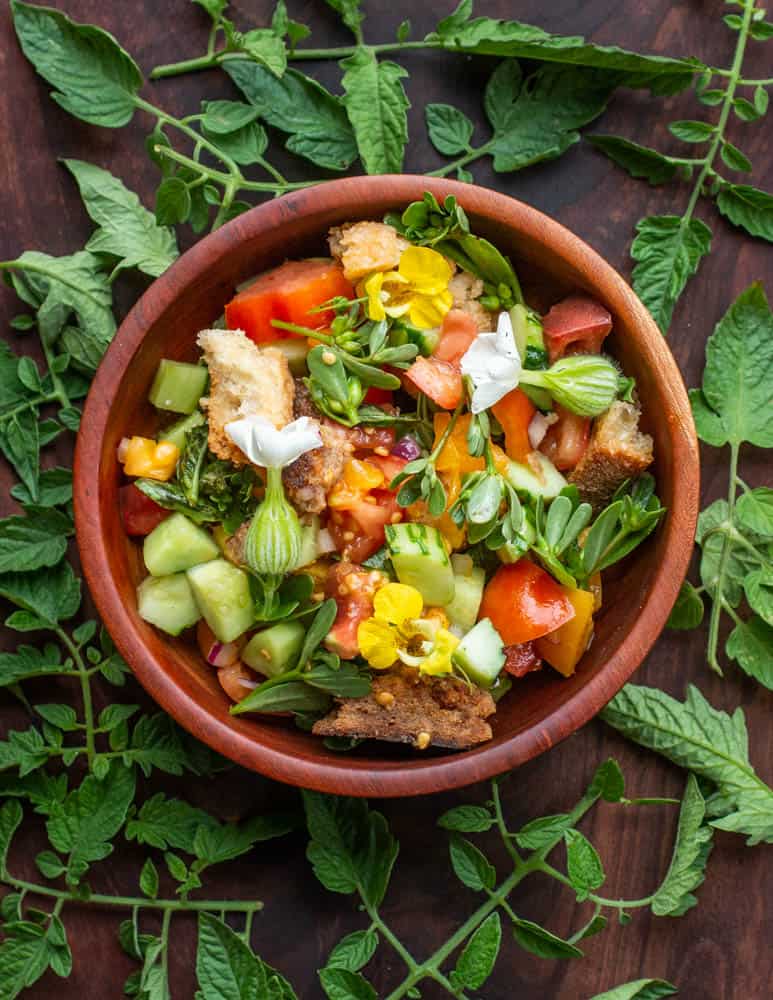 A good purslane panzanella is one of my favorite summer salads.

Purslane panzanella salad is one of the tried and true recipes I eat every year when plants need to be weeded from the garden. It's the classic summer salad of tomatoes, basil and mozzarella anointed with good olive oil you know and love, just enhanced with a couple handfuls of fresh verdolagas / purslane tips.

Every time I make it I can hear my former chef (Rino Baglio, the former personal chef to the princess of Monaco) who taught me to make the first version I learned in my ear: "The bread needs time with the tomatoes, it's best if they almost start to get soft from soaking up the juice." He would say.

Over the years I made lots of different versions of it, but this one remains my favorite, and was on the menu at my first restaurant for as long as we could source fresh purslane. 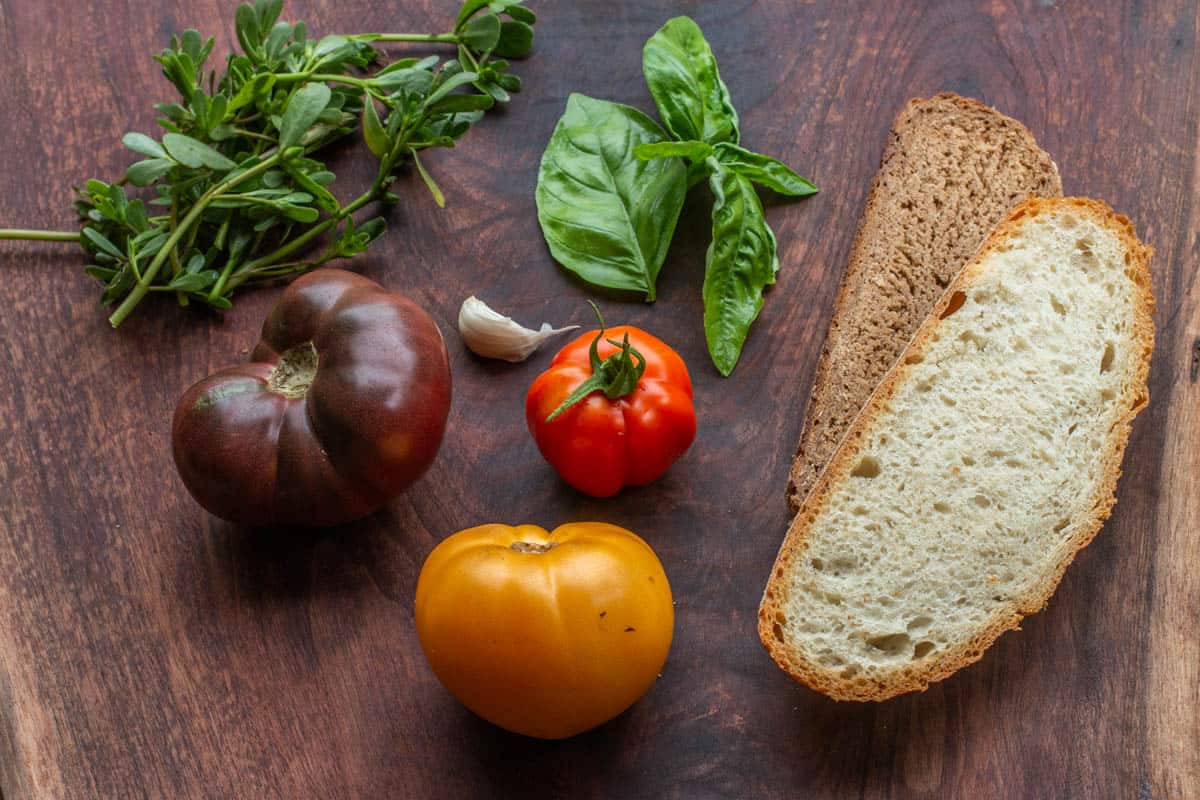 For the best salad, you want to use the freshest ingredients especially tomatoes that have never been refrigerated, and good bread.

This is something to only make during tomato season. The tomatoes must be the freshest you can get, and should never have seen a refrigerator, which ruins them for eating raw.

This is a place where you can really get creative with colors, shapes and sizes, since it's a chunky salad, so reach for your favorite heirlooms, or a mix of small tomatoes and large ones cut into similar sizes. One thing to consider on the type of tomato is the water content too. Larger tomatoes will give off more juice, which helps soak into the bread, which I think is one of the best parts of the salad. 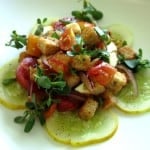 My original purslane panzanella. For a while I put the cucumbers on the bottom of the plate. I keep old pictures around for comedic relief sometimes.

In the purest form, a good panzanella can be just tomatoes, onions, basil and oil. But other summer vegetables can be a great addition. In a couple of the Italian restaurants I worked at, we would add cucumbers, and I like the cool, refreshing touch they bring. I typically use English cucumbers, that have been seeded, but not peeled. If I have other cukes from the garden laying around, they will work too, but I peel and seed them first as the skin is thicker.

Traditionally, only extra virgin olive oil is used. At Heartland restaurant in St. Paul where I was sous chef, we only used ingredients from within 300 miles of Minnesota, and there I learned to love local, high quality oils produced in the area. Smude's sunflower oil is my favorite, and tastes strongly of sunflower. If you haven't had it, I recommend it. 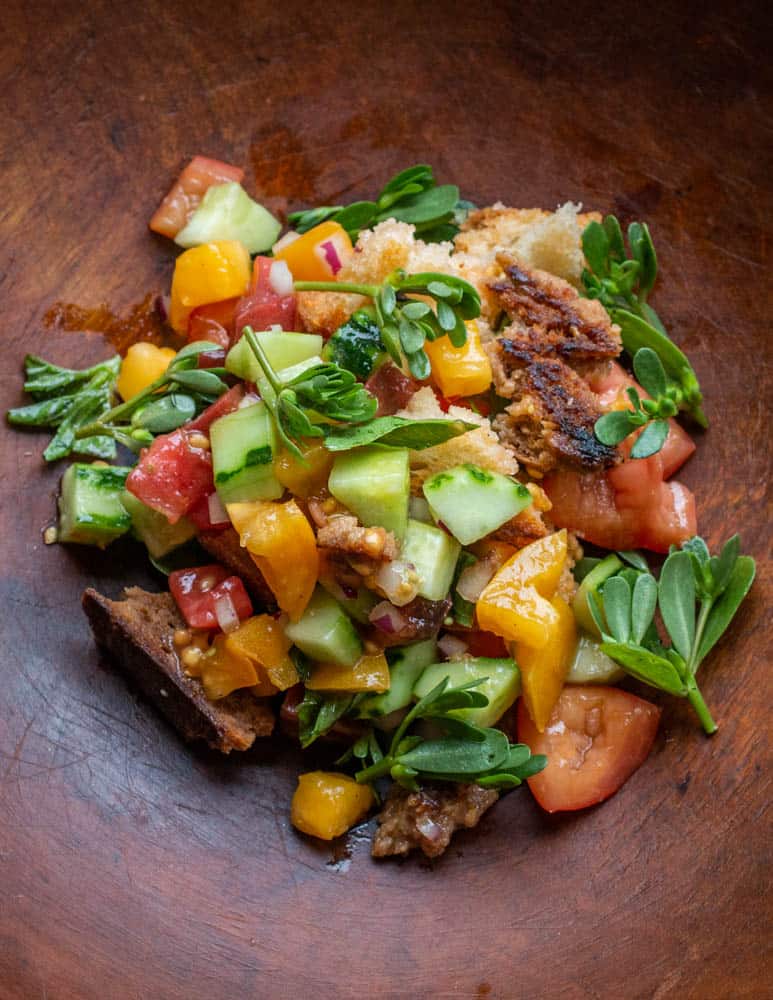 I like to let the salad rest for a bit to soak up the juices.

This is a peasant dish, traditionally made with stale bread. The type of bread itself is important too. Under no circumstances should you ever use basic white bread, or the cheap, fluffy "French" or "Italian" loaves from the grocery store.

Cheap breads, even when stale, will break down into mushy bread detritus, where high quality loaves will hold their shape, as well as the natural juices from the tomato for a longer period of time. No matter what bread you use, I like to remove the crust, since with high quality loaves it's often too tough to be pleasant, even after the salad has rested for a bit.

Fresh mozzarella is traditional, but burrata can be a nice (if more expensive) variation. You want to use mozzarella that is sitting in it's own whey here-not firm block mozzarella that you would grate, which is too firm to work here.

During the summer I would add whatever edible flowers I could pick to the salad to switch things up. Pictured are white campion and touch-me-not flowers, but peppery nasturtiums are always good too. 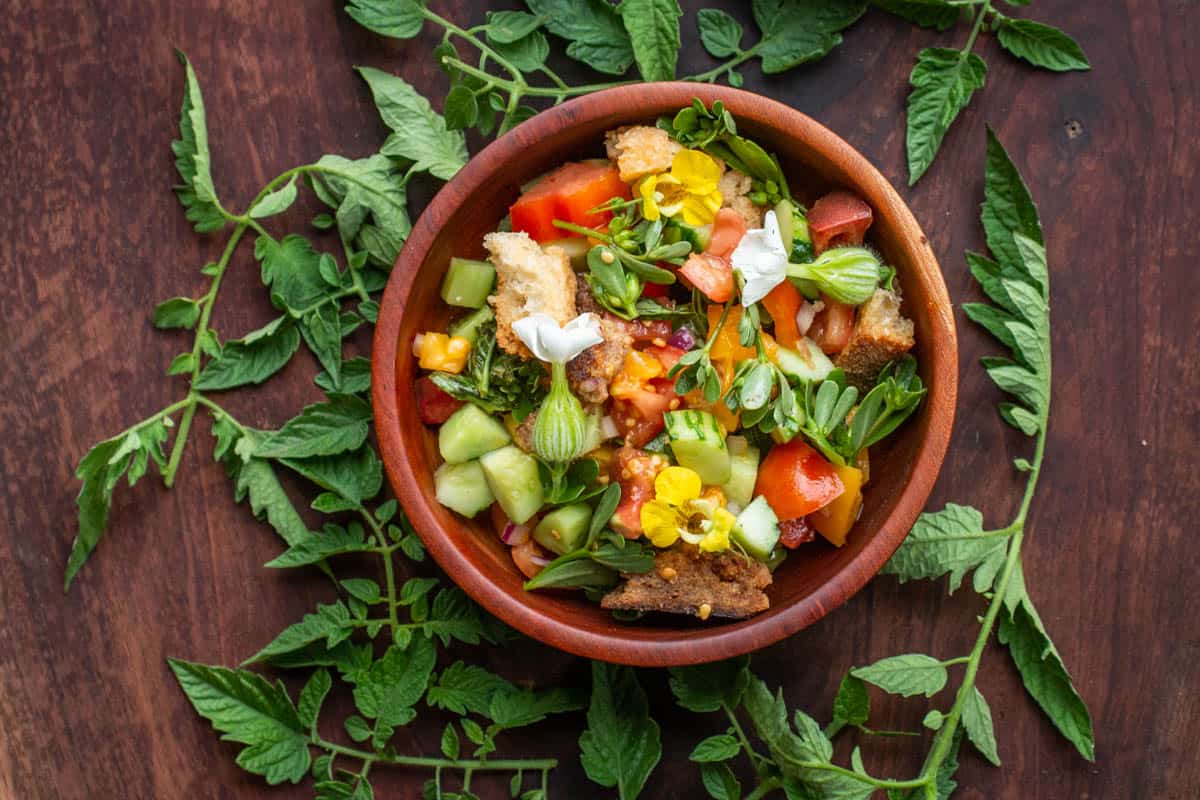 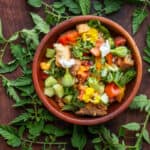 A simple panzanella with purslane was one of the popular summer salads at my first restaurant. Serves: 6-–8 as a side dish.
Prep Time15 mins
Course: Appetizer, Salad
Cuisine: American, Italian
Keyword: Panzanella, Purslane, Verdolagas
Servings: 6