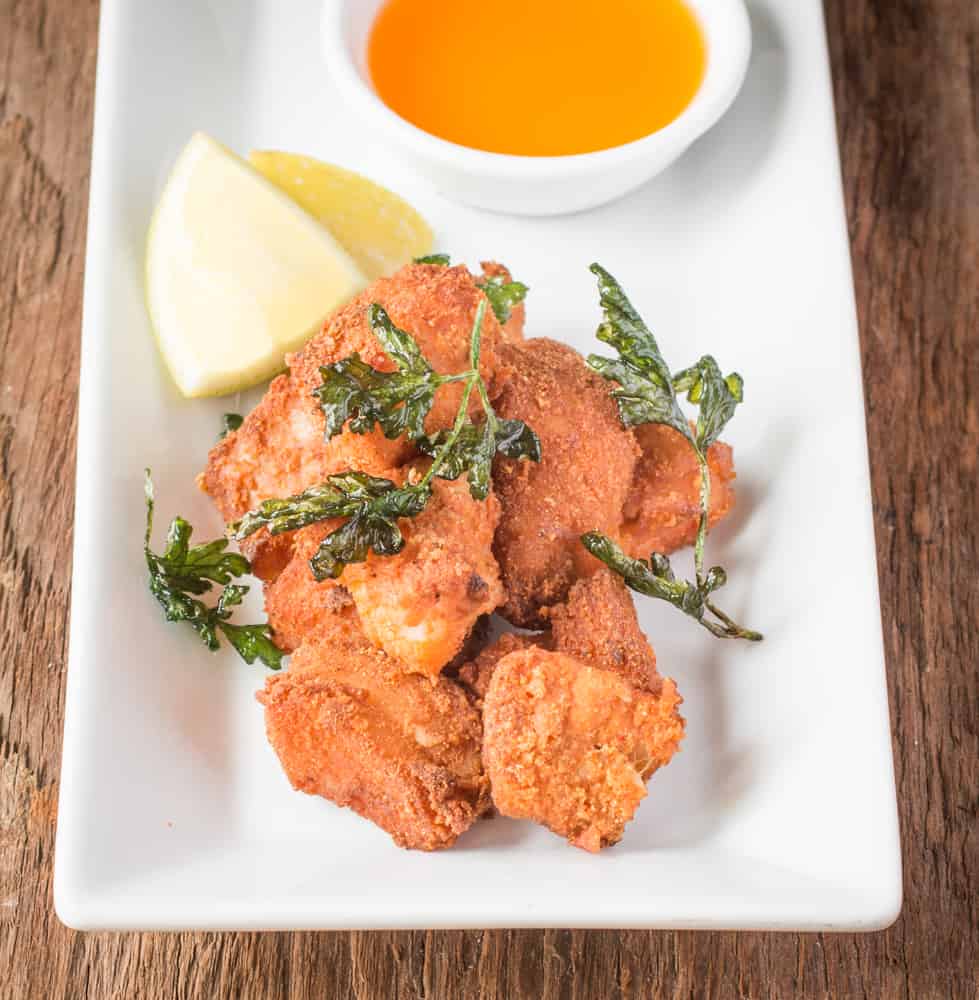 Burbot was one of those interesting local fish, like sunnies, crappies and perch that were hard to source through fish purveyors, no one seemed to carry it. Eventually I got to try my first after someone was nice enough to grab me a couple packages from a fish shop up in Cumberland, Wisconsin.

I knew that burbot had been compared to monkfish, kind of, since they both get referrred to with the name “poor man’s lobster”. After trying a couple batches, I almost agree, but I’d say monkfish is much more of a lobster-esque flavor and texture, personally.

There’s a nice meaty-ness to the burbot, and since monkfish definitely isn’t local to me, I made a few fun things with my lingcod (one of it’s other names, along with eelpout and fresh-water ling) and these simple burbot nuggets were the winner. If you don’t like burbot, skip down to the crayfish butter, which you can make with lobster, shrimp, crab, or any crustacean shells you have.

Here’s the jist of the recipe: my burbot filets were a little on the haphazard / uneven side, so I cut them into bite sized morsels. Keeping with the lobster theme, I ground up some clean, dried lobster mushrooms and seasoned them to make a crispy, tasty dredge, since I love coating any fish in ground lobster mushrooms (poultry is great too). 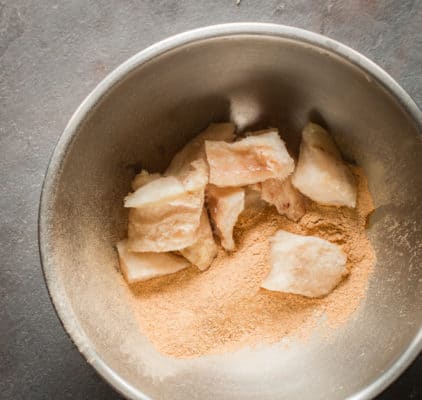 Tossing some burbot chunks in the lobster mushroom rub. 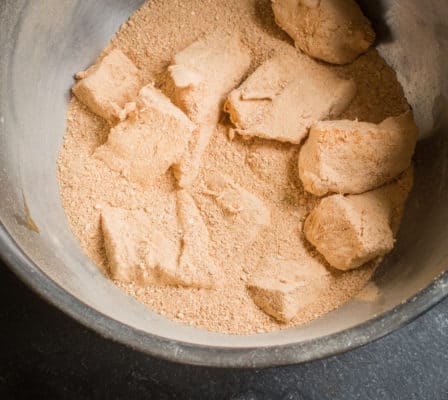 Toss ’em around well to coat. 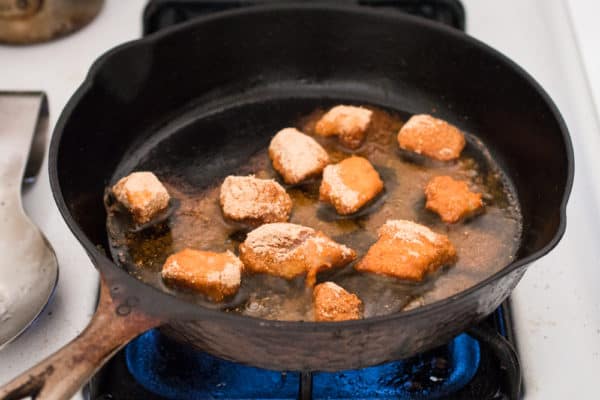 Tap off the excess and fry. (I couldn’t tapped off more on mine, can you see it’s migrated off of them in the oil?

In keeping with tradition, there’s a butter element, since anything tastes good dipped in clarified butter. Since I like to clarify the butter to make it clear, it gave me an excuse, and option to force another locally available lobster-themed creature into the mix: crayfish. 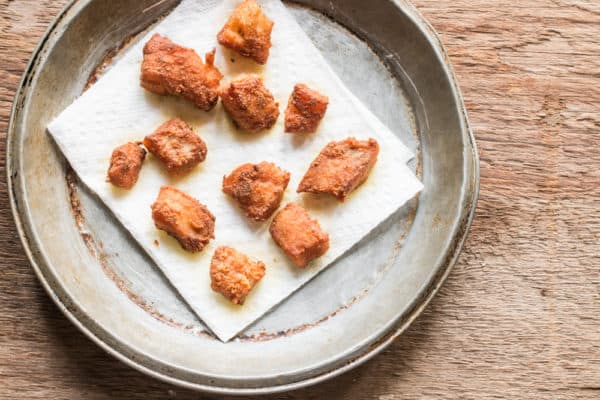 Drain the nuggets for a moment to shed oil.

This is a great chef secret. I’d just done an event where I used a bunch of crayfish tails for bisque, and since there weren’t near enough heads to make the stock, I had to make the stock with shrimp shells, which I am thrilled fish purveyors have started carrying (they’re a great low-cost, interesting alternative to lobster). I saved some of the mud bug heads for myself to make butter, the better to dip everything from broccoli to my fingers in. 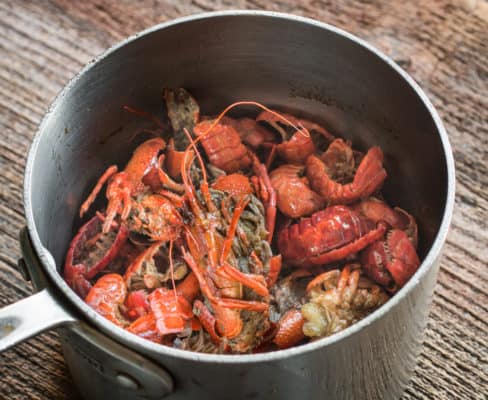 Crayfish heads, before they get crushed with a mallet.

Besides stock, ditch lobster heads, or any crustacean shells, pounded and then cooked with butter makes a fantastic infused drawn butter for dipping things in. I can’t speak to the science of it, but the tasty compounds in any crustacean shell infuse like a dream into fats and oils, an old trick I gleaned from watching a line cook I looked up to playing around one night, back in my Pazzaluna days. The beauty too, is that you only need a tiny amount of crayfish shells to infuse some butter, as a little mudbug goes a long way.

The end dish is really simple, you dredge the burbot nuggets in the lobster mushroom coating, fry them up, then dip in the infused butter. A little fried parsley and lemon wedges add color to the plate and count as vegetables. 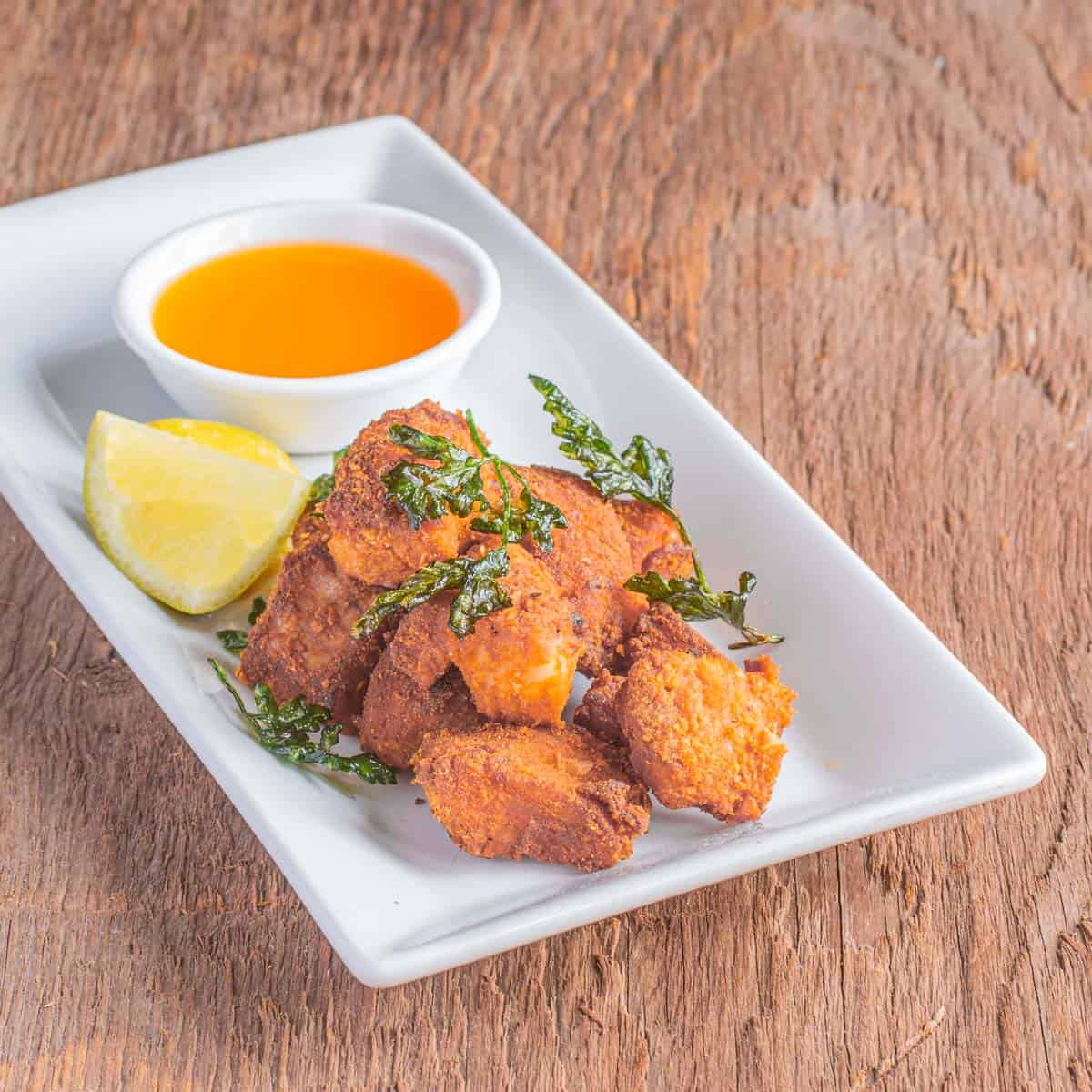 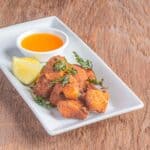