I'd struggle to think of anything that wouldn't be good seasoned and cooked covered in fat with herbs, and lobster mushroom confit is no exception. Even though mushrooms will never get fork tender like a pheasant thigh, or a goose leg, they're still great candidates for confit, but especially chunky, ones like lobster mushrooms.

Lobster mushrooms don't have tons of flavor fresh, and their shelf life can be widely variable depending on the age of the specific mushroom. With that in mind, it's nice to have a few different ways to preserve them.

Confit isn't an everyday thing you'll make all the time (this is pulled directly from my restaurant files) but it's definitely a special treatment worth considering, especially if you have a bunch.

With lobster mushroom confit, I treat the mushrooms exactly like I would meat. I cut the mushrooms into meaty pieces, weigh them, season them with 1% (or slightly more) of their weight in salt in grams, then mix them with a bunch of herbs, allow them to sit overnight to let the salt and herbs penetrate them, then cook them slowly in lard or another fat.

This is a way I would preserve large amounts of lobster mushrooms for restaurant service, storing the finished product in a hotel pan in the walk in cooler, but you can easily do it in a mason jar, as long as you make sure everything is kept under fat, which I've illustrated here.

You could also pack the mushrooms into a vacuum bag, fill with the room temperature oil, chill to firm, and then vacuum seal and freeze, which is a great option if you don't want to devote fridge real estate to mason jars.

Kinds of fat you can use

Lard is my first choice for confit since it gets firm, forming an air-tight, hermetic seal that allows the mushrooms to be stored for months under refrigeration.

But, you could substitute unsalted butter for a dual-yield product, since you'll basically be making my lobster mushroom infused butter at the same time, which is a fun thing to keep around for other random things.

Once the mushroom confit is made, you store it for a while, say a couple weeks in the fridge, where it will mature and improve in flavor.

When it's time to use the confit, you dump the contents of the jar into a pot, bring it to a boil, then simmer for a while, then simply ladle out pieces of mushroom and a drizzle of their herby, rich fat onto whatever you're serving them with. Polenta with a side of wilted greens is a great choice.

Holding things at home under fat is an ancient method of food preservation that pre-dates refrigeration by millenia, but our modern appliances have disrupted our ancestral knowledge of the practice.

Storing things like this at home, especially if you're not familiar with the process, isn't anything to be scared of, but you need to understand some restaurant best practices that are generally assumed here.

Yes, and we used to do it with whole Agaricus caps preserved in oil. Chunky mushrooms will be the best here, but you can do it with others.

Can you store it in a pantry?

If you pressure canned it, definitely. If you water bath can it *probably*, but you're on your own there as I haven't tried it.

Sausages and meat used to be kept like this without waterbath canning, but that was in the cold season in Europe, so the fat layer was always rock solid, and they were probably kept in a place so cool it neared refrigeration temperature. The best practice here is to store the confit in the fridge or freezer.

This doesn’t have to be a preserve, at all. Most of the time I would use it in restaurants to extend and align the shelf life of lobsters when picked en-masse, where I would harvest them and serve within a week or two. If holding things under fat freaks you out or makes you nervous at all, just hold them in the fridge and eat within a week. 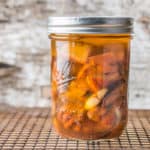 On the salt For restaurant batches, say 5lbs + it’s fine to use 1% salt by weight. For smaller batches, I find I like to add a little bit more to ensure the confit is aggressively seasoned. Yield This will make enough to fill two pint jars, with a good amount excess fat and a few mushrooms leftover, as this has been modified from a large batch stored in hotel pans. 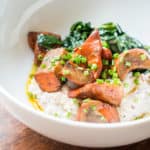