Getting to meet one of your personal heroes is a great experience. Since I'm a food nerd, most of my heroes are chef's or personalities somewhere in the industry, with the exception of Marcus Arelius. When I went to Provence last year, I had the chance to eat at Jacques Chibois, whose work I've been following since I was a teenager.

Chibois's restaurant is in Grasse, the beautiful perfume capitol of Provence known for it's lavender fields where workers still pick flowers in the early morning before the heat of the sun dulls their perfume. Chibois's restaurant and hotel sit on an old olive grove built in Roman times, oozing history alongside the smell of obscure herbs, flowers and fruits.

Dinner was fantastic, and we were lucky to arrive during mushroom season. One of my favorite dishes was a "carbonara" of chanterelles fresh pasta and local ham. Of course a carbonara of little chanterelles will taste great, that's a given, what I thought was a really creative was the garnish-a raw julienne of black trumpet mushrooms. There's often a lot of hot debates in the mushroom community about eating mushrooms raw for a number of reasons I won't get into, but the trumpets here are a great example of how to sample them in the purest form, treating them a bit like you would truffles.

I've recreated his dish for you as It was served to me, as well as a variation that includes cream. Both are very good, although the cream version is more rich. I might use both versions here and there depending on how I'm feeling and the capacity of my line cooks. If' you've never added raw eggs to food like this before, the cream version is a little more stable and less finicky the the raw egg-pasta water version.

A few words of advice on carbonara. First absolutely, positively, do not add whole eggs to a carbonara. Egg whites contain much more water compared to fat than egg yolks, and if you toss them in raw like the egg yolks they'll still cook, but they'll make the pasta sauce watery and insipid.

Secondly, it's important that the pasta be tossed in a separate mixing bowl with the egg yolk and other ingredients. Tossing it in a still hot pasta pan will over cook the egg and give you curdles, instead of a rich, creamy sauce. If you try your hand at the second version of this with cream you can take the pan off the heat and add the yolks since the cream insulates them a bit. 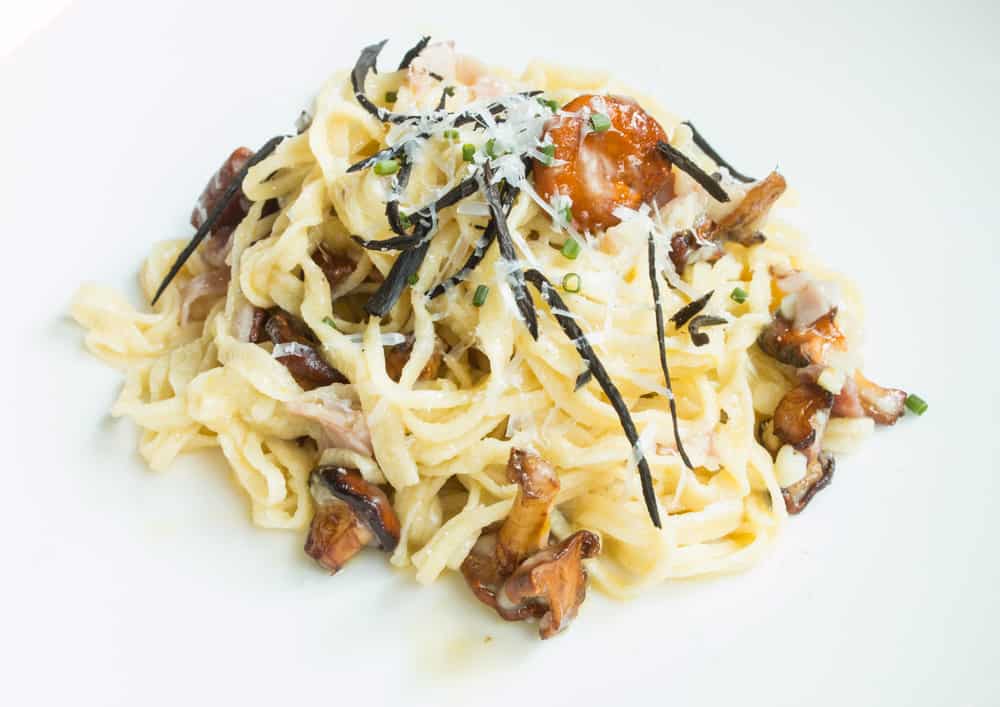 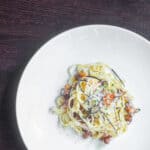 In America, carbonara has been bastardized into a very heavy, creamy abomination usually laden with chemically smoked ham or conventionally made bacon (which is also often artificially smoked), so I urge you to at least attempt this recipe without the cream at least once in your life, using a splash of pasta water instead--it's deceptively light and makes a great, quick meal in any season.
Prep Time30 mins
Cook Time20 mins
Course: Main Course
Cuisine: Italian
Keyword: Black Trumpet Mushrooms, Carbonara, Chanterelle mushrooms
Servings: 2