Fluffy and aromatic, made with whole spices, mushrooms and herbs. Indian mushroom rice, also known as mushroom pilau, is a great side dish to serve with curry, or on its own.

Pilau is probably one of the oldest names for what most Americans know as pilaf. It was probably brought to India from Persia. From India it spread around the world giving us pilaf, Greek pilafi, Spanish paella, and the national dish of Uzbekistan: plov. Eventually it came to the United States, and gave us modern pilaf and dishes like South Carolina perlo.

How traditional modern Indian mushroom rice recipes are could be up for debate. The dish is often called British Indian restaurant (BIR) style mushroom fried rice. Curry houses in the U.K. speed up the process by stir-frying cooked white rice with mushrooms and spices to order.

Most recipes call for chestnut mushrooms. Confusing if you're American, this is a British name for cremini or baby bellas. The name can also refer to other mushrooms like pholiota.

Regular white button mushrooms and the like are ok in a pinch. But, if you want to use a cultivated mushroom, I recommend shiitakes.

Inspired by Indian cuisine and because I love mushrooms, I made the version pictured with Gucchi (morels), so you could call it a gucchi mushroom pulao. Morels grow in the foot hills of the Himalayas and there's a few traditional dishes made with them.

If you can cook rice, you can make this. Heat some oil and toast a few whole spices like cumin seed, cardamom and cinnamon. Add mushrooms, onions and spices soaked rice and water or stock. Cook until fluffy and serve with a curry. 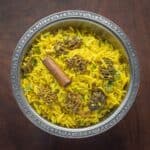 This is sold in Ethnic markets in jars. You can make your own by pureeing equal parts garlic and peeled ginger in a food processor. You can also use a hand blender as I do in the video. Add a little water to help the blades move.