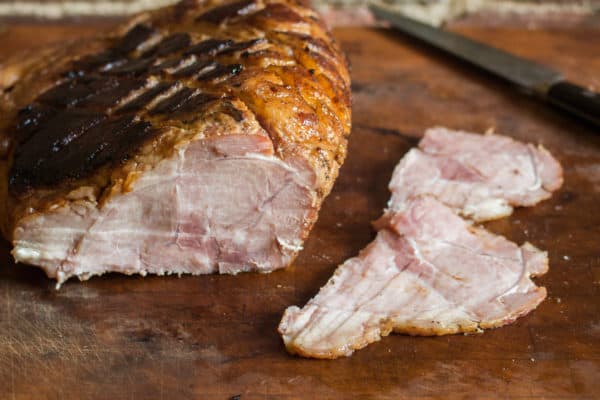 If you make your own bacon, or process your own hogs, you likely know how incredible homemade bacon is. A while ago, during the pandemic when hogs were a dime a dozen, I got the chance to butcher two whole pigs with my father and some friends, and before I did, I made sure to ask all my chef and butcher friends what sort of cuts they’d like to take if they were cutting up their own pig. I got a lot of great ideas, a few new ones that I’ll be sharing with you, but one of my favorite suggestions came from my friend Mathew Normansell of edenwildfood.com a British citizen who moved to Wisconsin a few years ago. Mathew mentioned English bacon, and, DIY bacon afficionado that I am, since I hadn’t heard of it, I was dead-set on making some. 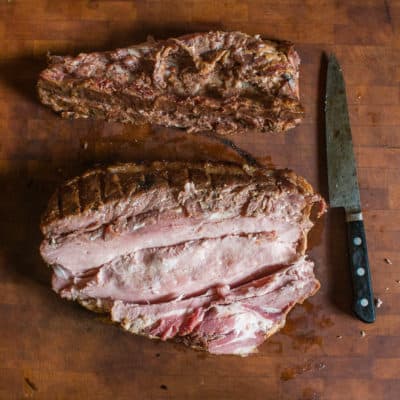 Removing the section of spine after smoking.

So hows English bacon different from regular bacon? Easy. A quick google will show you plenty of pictures, and, with a rudimentary knowledge of pig anatomy, you’ll be able to see where the cut comes from. American bacon is cut from the belly–it is pure belly. 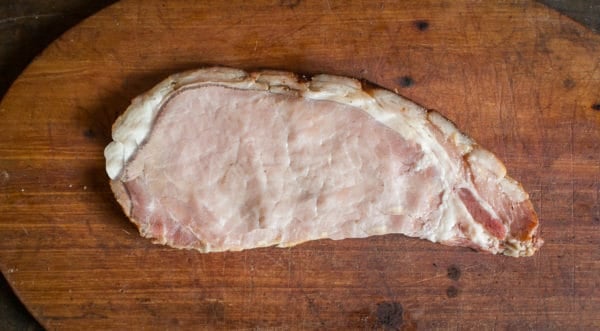 Finished slice. Note the nice layer of fat on top. With a scalded pig this will be a lot more fatty.

English bacon is a hybrid. If you look at some of the pictures online, it might seem to resemble thinly sliced pork chops, and that’s exactly what it is. English bacon is made from the loin, but not the trimmed, fat-less loins or boneless chops you’ll see in the supermarket, it’s made from a loin with the fat cap still attached. This gives it a nice combination of fat-to meat, although it will always be a little more lean than American bacon.

So, hows it eat you ask? Pretty darn good. It’s a little like if you crossed Canadian bacon with American bacon, since there’s much more fat than typical Canadian bacon, but a little less than American. Either way, it’s cured, smoked pork, it’s delicious, and it’ll make all the things taste better. As a bonus, I smoke mine with the spine still attached so that I could remove it to get a bonus soup out of the deal when everything was said and done. 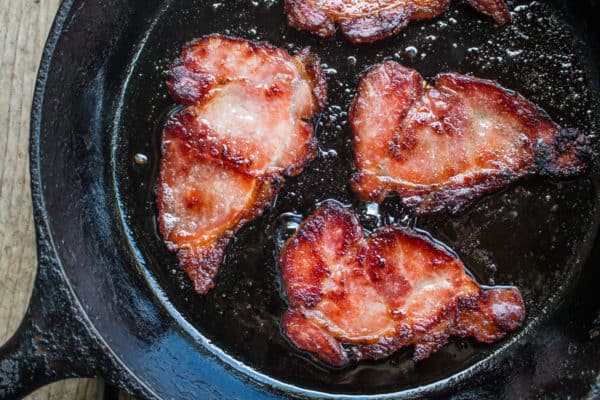 Cooks up just like any other bacon, with a little less rendered fat, of course.

How to cut it 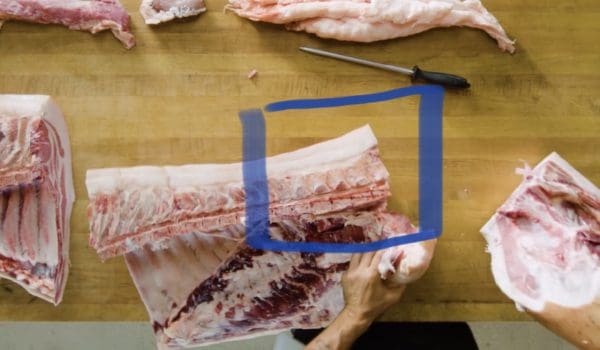 The hand is holding the belly, still attached to the loin. The blue square outlines the rib-less section of the loin that will be your English bacon. Photo taken from a video by Bon Apetit.

This is the only tricky part, especially if you’re new to hog butchery. Here’s how I did it, step by step. Also, if you need a refresher, this video tutorial on whole pig butchery is the best I’ve ever seen. 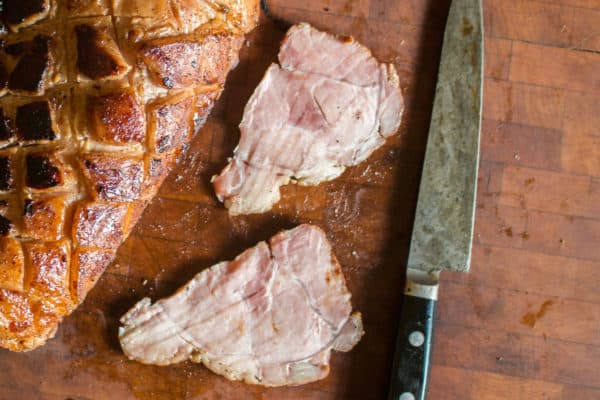 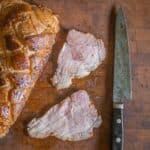