An delicious French-style aubergine gratin baked with tomato sauce, cheese and herbs is one of my favorite gratin recipes. If you or your family aren't fond of eggplant, you have to try this. Over the years it's changed more than a few people's perspective on the big purple vegetables.

There's a trick I like to use while cooking with eggplant. Raw, eggplants are full of moisture, and can be bitter with a strange texture. When I cook eggplant, most of the time It undergoes some sort of preliminary cooking to denature it before the final cooking.

The preliminary cooking most people will be familiar with is frying eggplant slices in oil, but I find it soaks up too much and can make a greasy dish.

Grilling can work, but the eggplant has to be sliced. Baking eggplant can result in an overcooked, mushy mess-good if you're making a dip, but not for a gratin.

The best way to cook aubergines is to blanch them in salted water, then cool, before adding to your recipe.

Cutting the eggplant into cubes and blanching in boiling water for a few moments changes the structure and the mouthfeel of the eggplant, tenderizing it and making it soft, as well as seasoning it if you added salt to the water, which I always do.

From there, the chunks of eggplant can be added to a dish as-is, or be the start of another recipe like my favorite marinated eggplant, where blanched cubes are tossed with hot chilis, oil, salt, vinegar and herbs and allowed to mature for a while.

You might be wondering what the crispy looking things on top of the eggplant are. The meal I was planning to use this in had to be gluten free, so I needed a topping for the eggplant that would be crispy, delicious, local, and, not breadcrumbs. Feel free to use breadcrumbs, crackers, or whatever you have on hand.

Puffed wild rice is a great alternative to breadcrumbs, although it takes some time to make. A description of the process is in the recipe notes here. 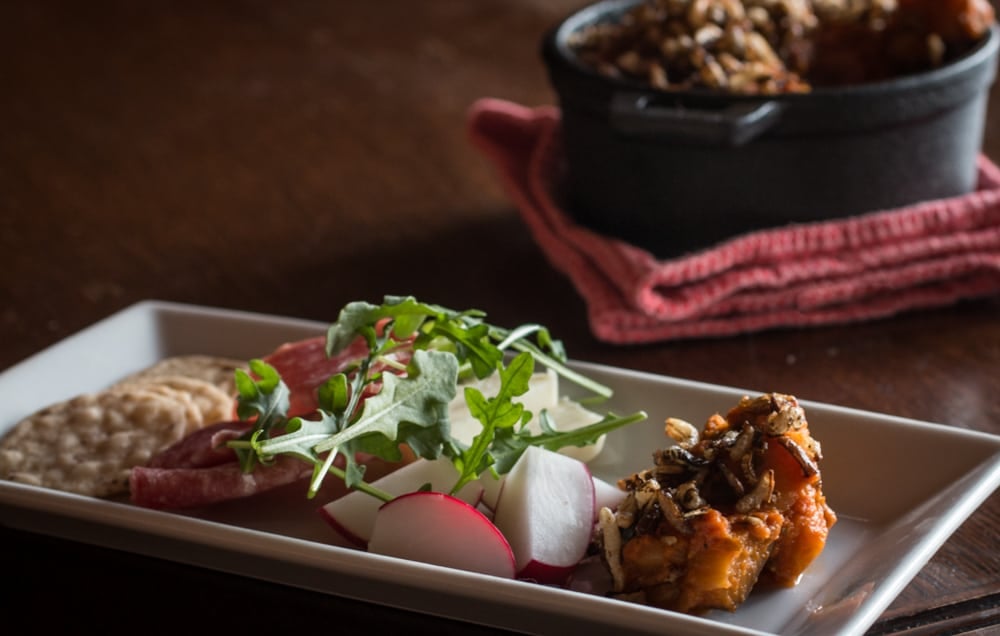 Eggplant varieties to use

There's a number of types of different aubergines you can use here, and they can be confusing. Japanese eggplant are my favorite since they have few seeds and are easy to slice and layer in things like this. Thai eggplant are too small for this recipe. Big Italian eggplants will work, but they have more seeds than Japanese eggplant.

I use two wild herbs (dried bee balm and dried ramp leaves) to flavor this, but you can skip them, or just add a few torn basil or mint leaves to your eggplant gratin. 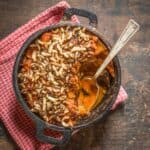 *The meal I was making here had to be gluten free, so, instead of baking the dish with breadcrumbs on top like I would normally do, I used puffed wild rice. To make puffed wild rice, cook wild rice per usual, then dehydrate it. After the rice is dried, fry it in a thin layer of oil as you would popcorn. The puffed rice will keep and stay crisp for 24 hours.