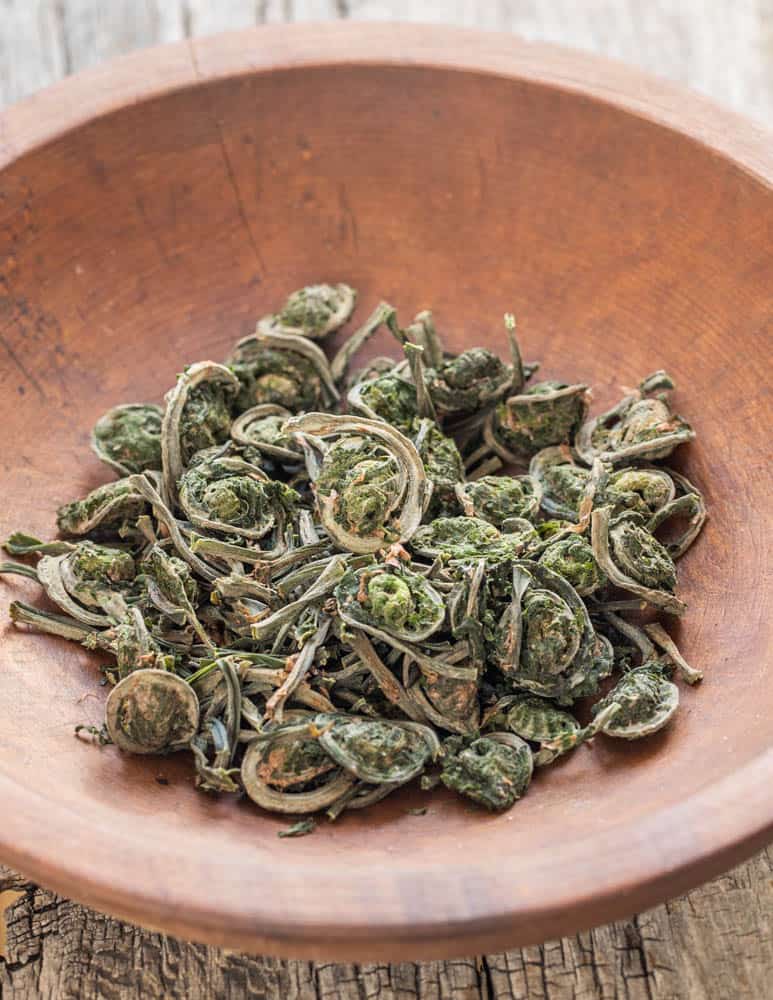 I've preserved them (crunchy pickled fiddleheads) and that works well, but, vinegar-based preserves limit the possibilities for cooking down the road and it's nice to have some variation. What you might not have thought of (I know I hadn't until last year) is that you can dehydrate fiddleheads, a technique that takes a page from Korean culinary tradition. 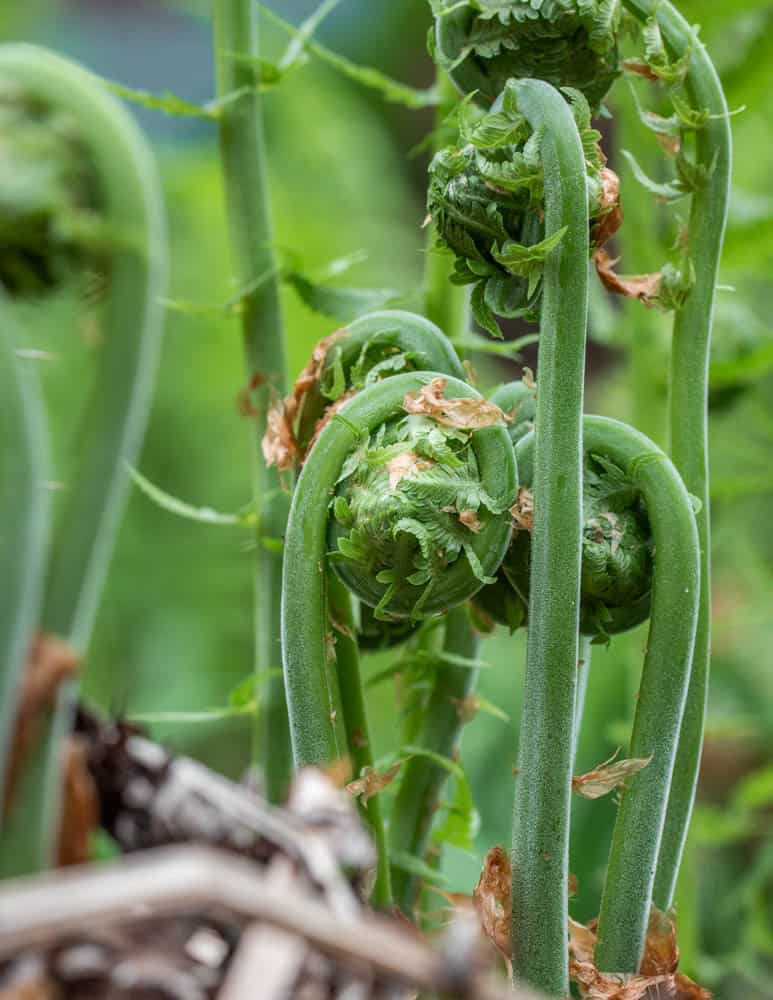 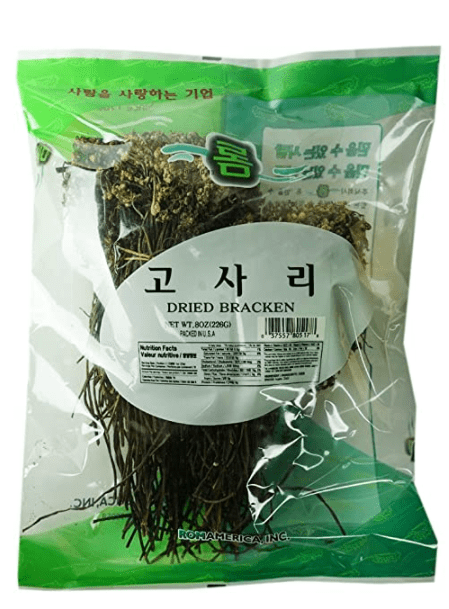 I can't take credit for the method, that goes to my friend Linda Black Elk who shared it with me.

When she and her husband Ahán Heȟáka Sápa came out for my plant walk with Sam Thayer last year in the Spring, one thing she mentioned I should try was dehydrating my fiddleheads.

I made sure to try some, and, as I followed her directions, I was reminded that I'd already seen dried edible ferns before.

If you go to an Asian market and head over to the dried section, the aisle with the bags of dried mushrooms, roots and herbs, hiding among them, most likely, will be little bags of black twigs with the name "fernbraken" or something like it on the front. 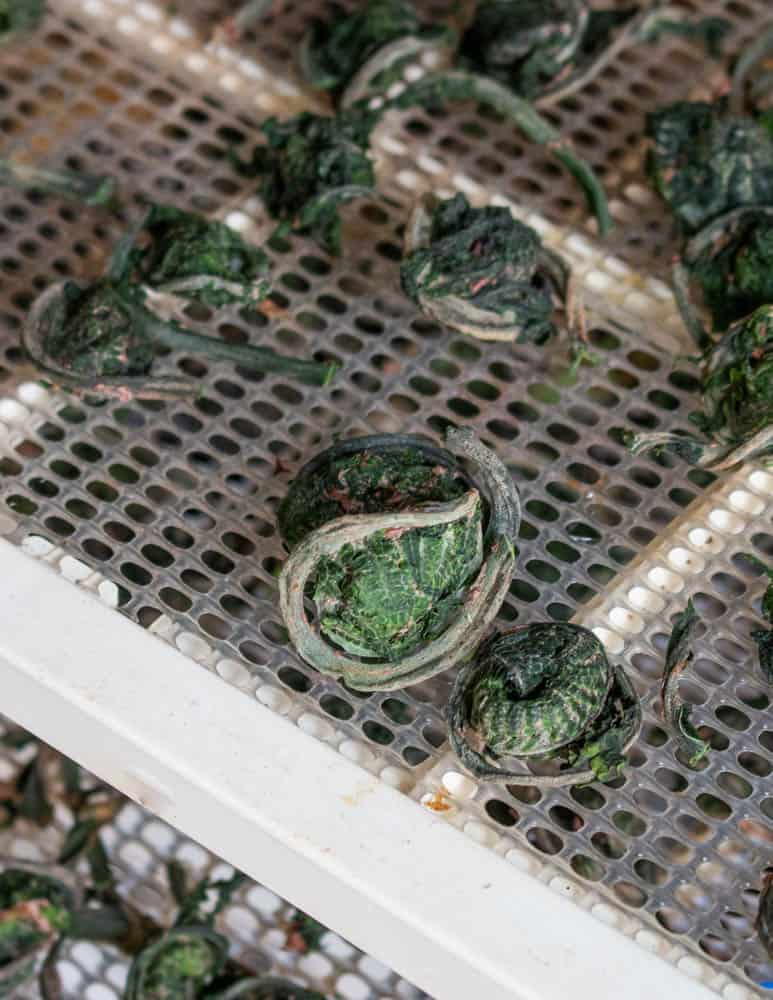 You'll want a dehydrator to dry your ferns.

The fernbracken, as the name implies, are ferns. They aren't the ostrich ferns that I pick in Wisconsin, or lady ferns from the Pacific Northwest, but they're close.

Fernbraken (also known as gosari or fernbrake), are bracken ferns (Pteridium aquilinum) and are a calling card for certain dishes in Korean cuisine that may specifically call for them dried.

Bracken ferns are the traditional gosari. They need to be blanched longer than typical fiddleheads to be edible. They're good, but you should research them a bit before eating to get to know them.

Bibimbap, the well known dish of rice with mixed vegetables and condiments (cursory description here) is probably the most famous dish I've heard of using gosari, and, after digging into my first jar of dried fiddleheads this winter, I knew why. They're a sort of tasty fern concentrate. 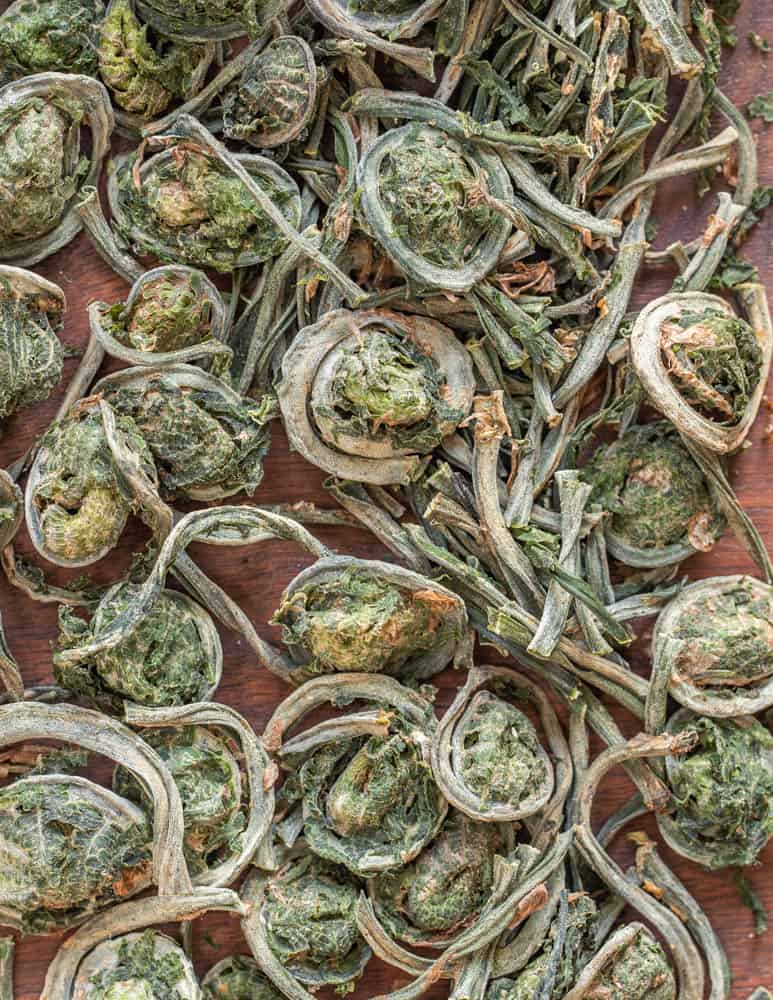 They don't look like much dried, and they'll lose a bunch of volume, but this is pure, concentrated fern magic.

I thought I knew what to expect from rehydrating and eating dried fiddleheads. Just a mild vegetable, right? Kinda. Like all other dehydrated things, dried fiddleheads are concentrated versions of themselves, just sans water. Fiddleheads have a mild, vegetal flavor fresh, but after drying that flavor gets intensified. 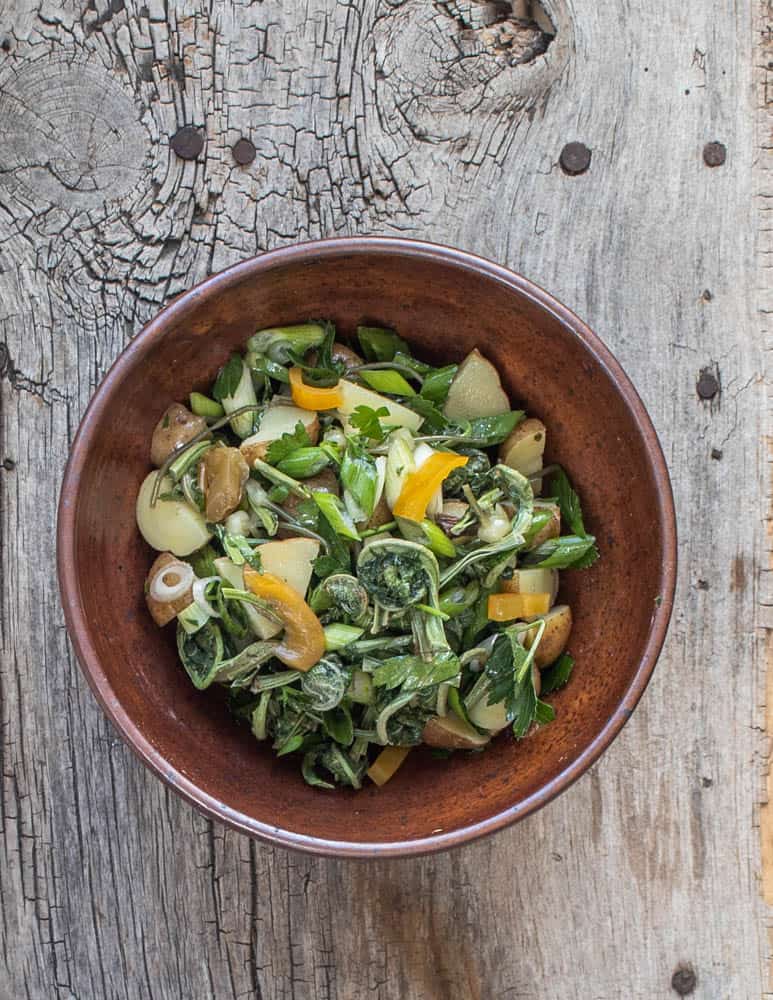 Simple salads of chunky vegetables, potatoes and a few zippy things here, are where slightly chewy, dried ferns will shine.

The flavor of dried fiddleheads was stronger than I expected, and reminded me of the oceanic, saline quality I taste when I puree or cook large amounts of common stinging nettles. It's not a fishy taste, per se, but that's about the closest thing I can come up with. It's definitely a verdant, umami taste. 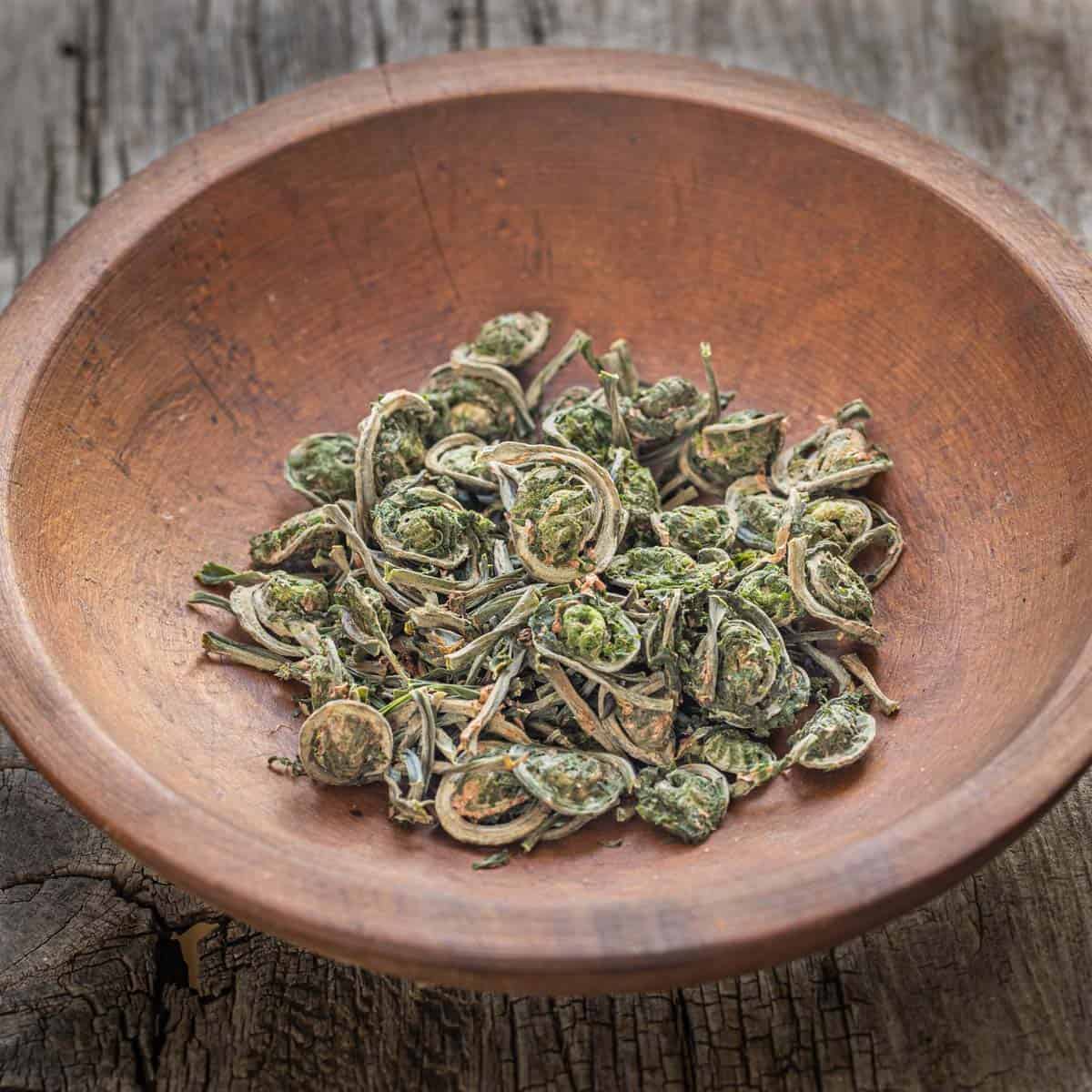 After the ferns are completely, definitely bone-dry, they can be stored in a jar in a pantry.

If you have a fern patch like me, and you end up having bags of them in the fridge, consider taking a bag and drying them to try them out, if for no other reason than to make your own version of Bibimbap, or adding them to a noodle soup. 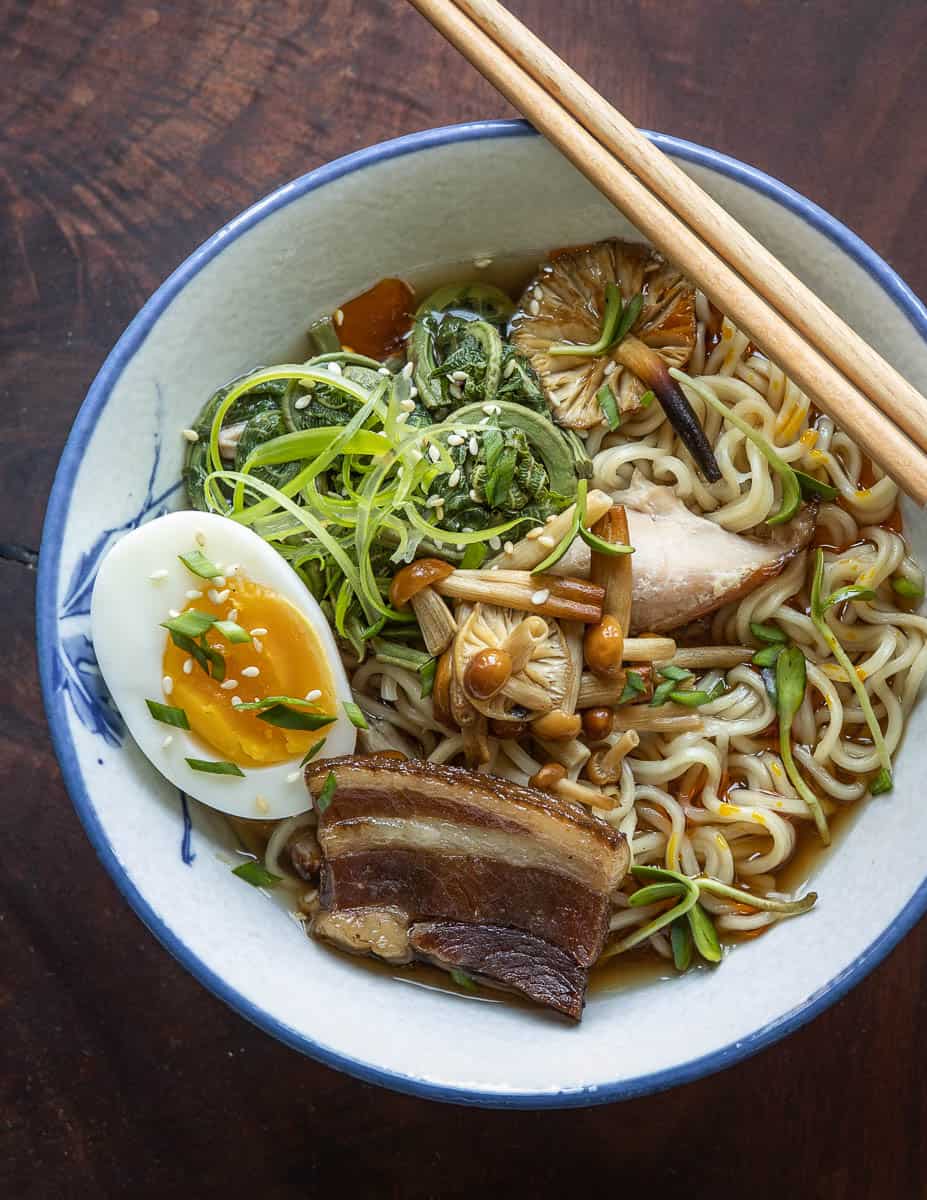 It bugs me a bit when I only see tiny curled croziers in images of food using fiddleheads. The whole fiddlehead, including the stems of varying lengths are edible, and shouldn't be discarded. Drying the stems is a good way to preserve them and save space, it's genius, really.

It won't do to just chuck the ferns in a random pot of soup or something like that. The ferns hydrate as they cook, and, as they're coiled to begin with, they'll unravel.

So, for example, if you want to add them to soup, soak them, then chop and add at the end of cooking to avoid green fern worms on your spoon. Stick to clean, minimalist flavors, things like miso soup, simple broth with vegetables, etc.

My favorite thing to do with them so far has just been to either soak them until hydrated and still a bit chewy, an hour or two, or gently cook them in water until just tender.

From there, I toss them with some oil and other chunky ingredients and fashion a salad out of it. This is the probably my favorite way I've found to enjoy their flavor. 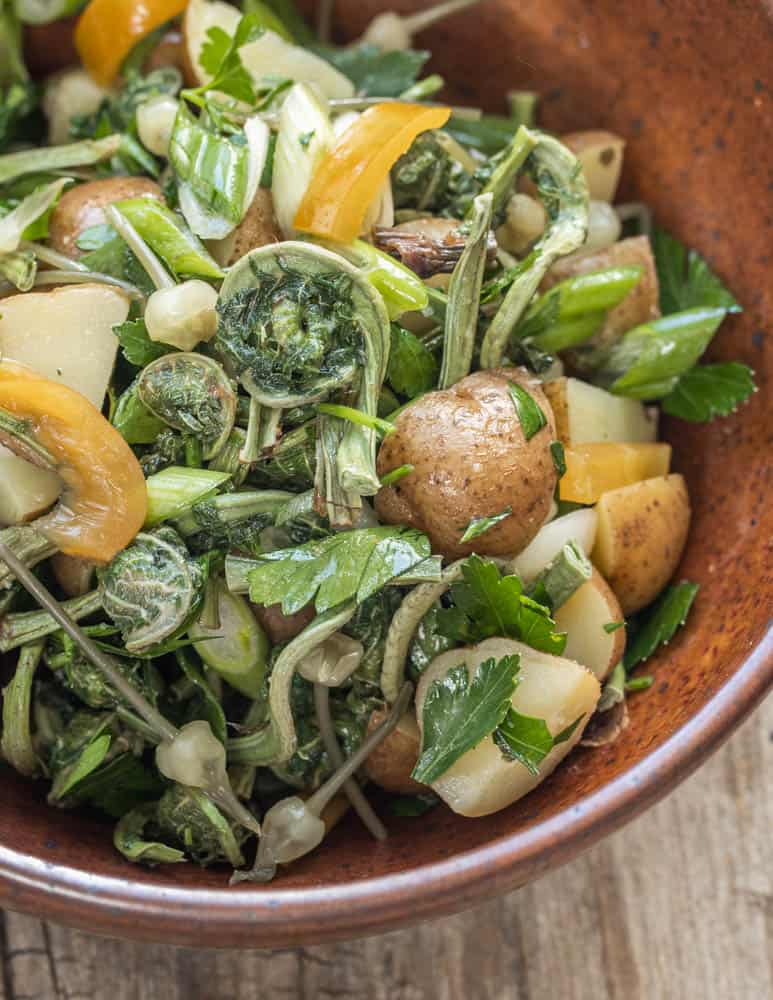 When I say salad here, I'm talking specifically about a salade composée—chunky vegetable based salads, not leafy greens.

Below is a variation on German potato salad (no mayo!) you could adapt, but something as simple as a few sliced cold potatoes with good oil and something sharp to wake it up (fermented ramp seeds and onion bulbils here with a few pickled peppers) would be good too. I'm sure you can find plenty of things to do with them. 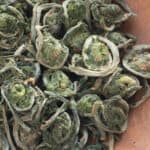 Dried fiddlehead ferns are a fun thing to keep in your pantry, and a good, non-refrigerated or pickled preservation option if you have a large patch. You can make smaller amounts, but it seems silly to dirty a pan for less than a couple pounds.
Prep Time10 mins
Cook Time1 min
Drying time2 d
Course: Condiment
Cuisine: American, Native American
Keyword: Fiddleheads 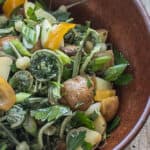 An example of how you can get the most from your dried fiddleheads. Soaking them in cold water until tender, but still a little chewy will retain more flavor than boiling them. Think of the flavors like German potato salad, dressed with a vinaigrette of your choice, instead of American potato salad that contains mayonnaise that would overpower the fiddleheads. Serves 2 as a small side dish. Adding cured ham like prosciutto would be nice.
Prep Time5 mins
Cook Time15 mins
Soaking time3 hrs
Course: Salad, Side Dish
Cuisine: American, German
Keyword: Fiddlehead ferns, Salad
Servings: 2