Brussels sprouts have come a long way. When I was growing up they were sort of a mystery. I remember eating them only once as a child and I didn't like them one bit. I can still recall people talking about eating them like they were some form of torture.

Slimy, soft, and stinky are adjectives that come to mind. When overcooked, they can be all of these things. If you've been to a farmer's market and seen the grandeur that is an entire stalk of Brussels still attached to the stem though you may have a different opinion, I sure do.

I think a big reason for the paradigm shift people have had about Brussels is due to how they're prepared. It used to be that you might heat them in some butter until they are falling apart, which tends to make vegetables in the cabbage family stinky. Now when they're served in restaurants, chefs know that when sliced in half, cooked from raw, and caramelized in some fat, they become delicious, nutty and irresistible.

With our cool climate in Minnesota, we get Brussels after the snow falls for a bit. When they're around and we have enough of them, one of my favorite ways to serve them is as a side dish. They're very popular, especially if you throw a little pork in the mix.

With all the richness of cabbage cooked in fat and tossed with bacon, you need something to lighten the Brussels and make them easier to eat. This is where a little acid makes the dish come alive. Just a shot of apple cider vinegar will do the trick, but If I'm feeling creative I might reach for some fun pickles to add. Any kind of pickled vegetable like onions or fiddlehead ferns could work really, but some mushrooms are a shoe in with flavors like cabbage and pork. You could choose any variety of pickled mushroom you like, but hen of the woods have an awesome texture so It's fun to showcase them here. 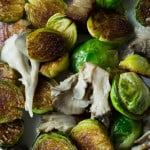 Brussels Sprouts with Pickled Hen of the Woods

A little trick to cooking Brussels sprouts is to score the bottom of them with a knife creating an X; it helps them to cook quickly, and evenly. After they are scored on the bottom, cut them in half.  See a video of this technique here.
« Classic Fried or Breaded Morels
How To Pre-Cook Risotto Like A Restaurant »