A basic broth made from pheasant back mushrooms is a good way to use the woody parts you found when you struck out on morels. Read on and I'll explain the details, and how I get a good flavor from roasting the mushrooms.

After morel season as we get into summer, the pheasant back, dryad saddle mushrooms (Cerioporus squamosus) will still be out, not in the staggering numbers we see during the height of the late spring season, but still out and plentiful.

They're not spring mushrooms though, and finding tender, succulent ones is far more difficult at this stage in the game.  If you can get your knife through them, you can always dry and dehydrate them, but another great thing to do with them is make some good stock or broth, especially for making things like my favorite DIY pheasant back ramen.

A simple pheasant back broth recipe doesn't require a lot time, ingredients, or skill--it's easy. The best part is that you don't need tender mushrooms either since even the most giant mushrooms you find can still make a great broth, as long as they can be cut with a knife, torn, or otherwise broken up.

You can pulverize them in a food processor too, but know that your broth will end up a bit more cloudy. Oh, and the flavor's great too. If you or someone you know doesn't care for the tell-tale farinaceous scent of watermelon rind or cucumber, making some simple mushroom stock or broth with them mellows that flavor out.

Just make sure to cook them a bit beforehand (I roast them, but you could also sweat or steam them). The flavor of the finished broth will be simply mushroomy, and you'd be hard pressed to say that it was made with only pheasant backs, for better or worse.

It's great used as the base for a simple soup, braise, simple sauces, or wherever mushroom flavor would be welcome.

Adjusting the recipe to your taste / needs

This is just a simple wild mushroom broth recipe, and you can adapt it to your needs, with whatever ingredients you have on hand. I like a little ginger in mine, especially if I'm going to be using the broth to make pheasant back ramen, which is delicious but feel free to change up the seasonings a bit if you like, keeping in mind the following

This is a nice, mild mushroom broth, and it's so versatile and easy to make. Here's what I do with the finished product. 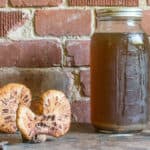