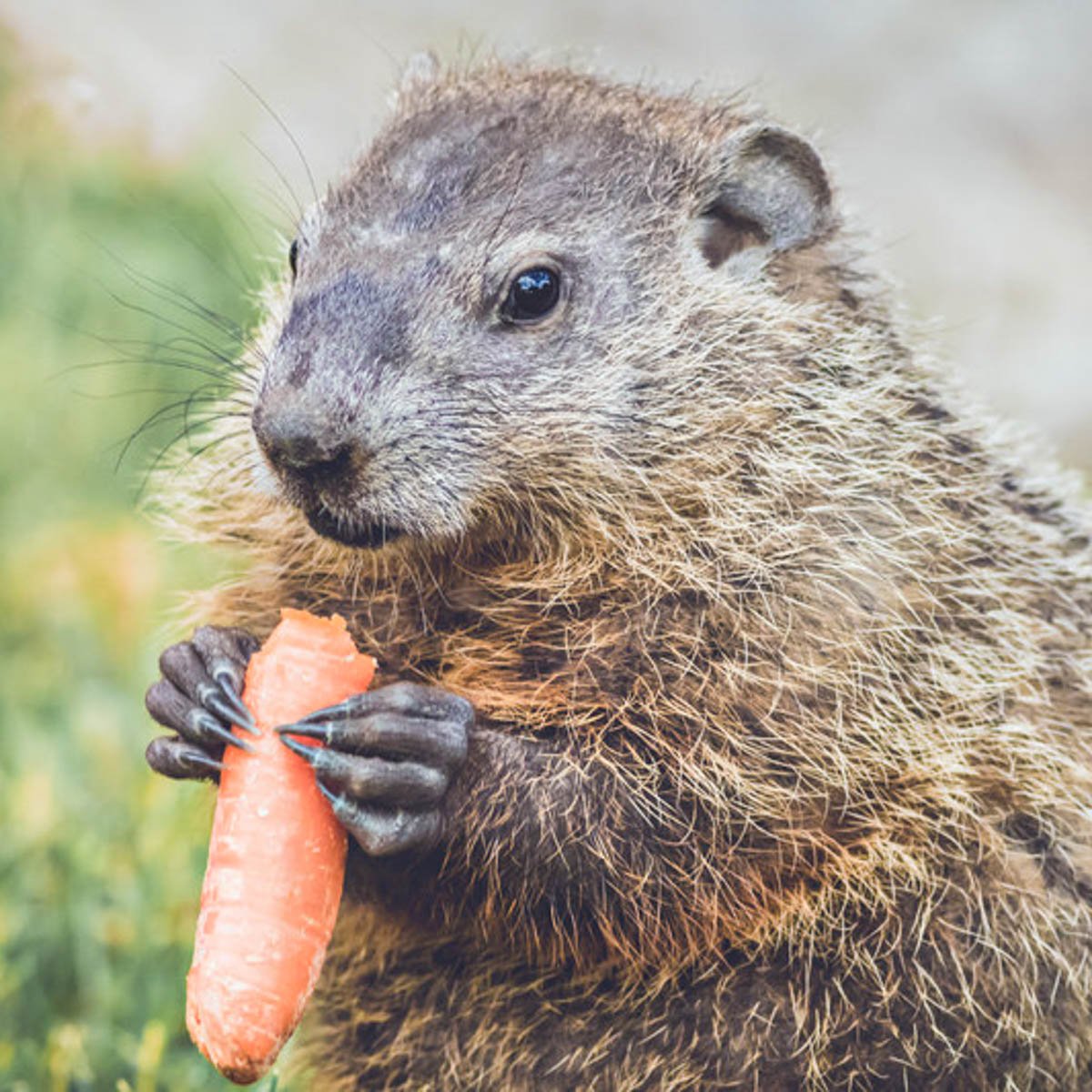 Woodchucks will get savage on your garden, don’t let this cute little bastard fool you.

Each year I try to cook a new critter, or a part of something I haven’t before. After cooking thousands of pounds of chicken, fish, beef, duck, pork, lamb and all the usual suspects, somewhere along the line I started to crave the knowledge of meat I hadn’t cooked before.

This year I had planned to cook with cuy, or guinea pig, (more on that later) instead, I wound up with a groundhog (a.k.a. woodchuck).

Different meats are more than a novelty, knowing how different animals taste will help you cook the animals you’re already comfortable with better by having a deeper understanding of flavor differences between the two. 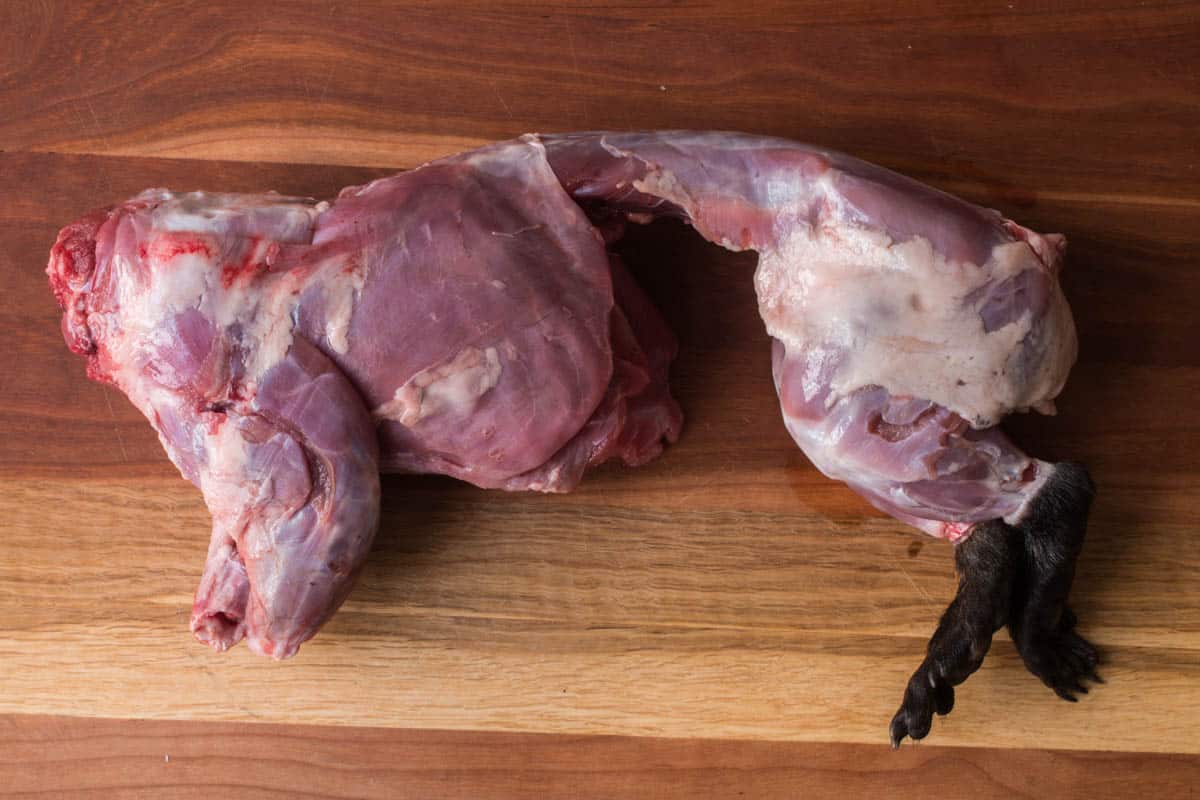 A skinned and gutted cousin of Punxsutawney Phil.

I spend most of my free time on a beautiful farm in Wisconsin filled with forests, a watercress-packed spring and  gardens, so many beautiful gardens. If you know a farmer, or anyone with a decent sized garden, you know there can be pests, especially out in the country, and groundhogs can be some of the most destructive.

They used to dig holes all over my father’s farm. I remember us trying all sorts of remedies to get rid of them. The most exciting strategy for me as a kid was the old garden-hose-in-the burrow trick. I would imagine flooding the underground maze, the groundhog dashing around, but they seemed to always find some part of their labyrinth that was waterproof. 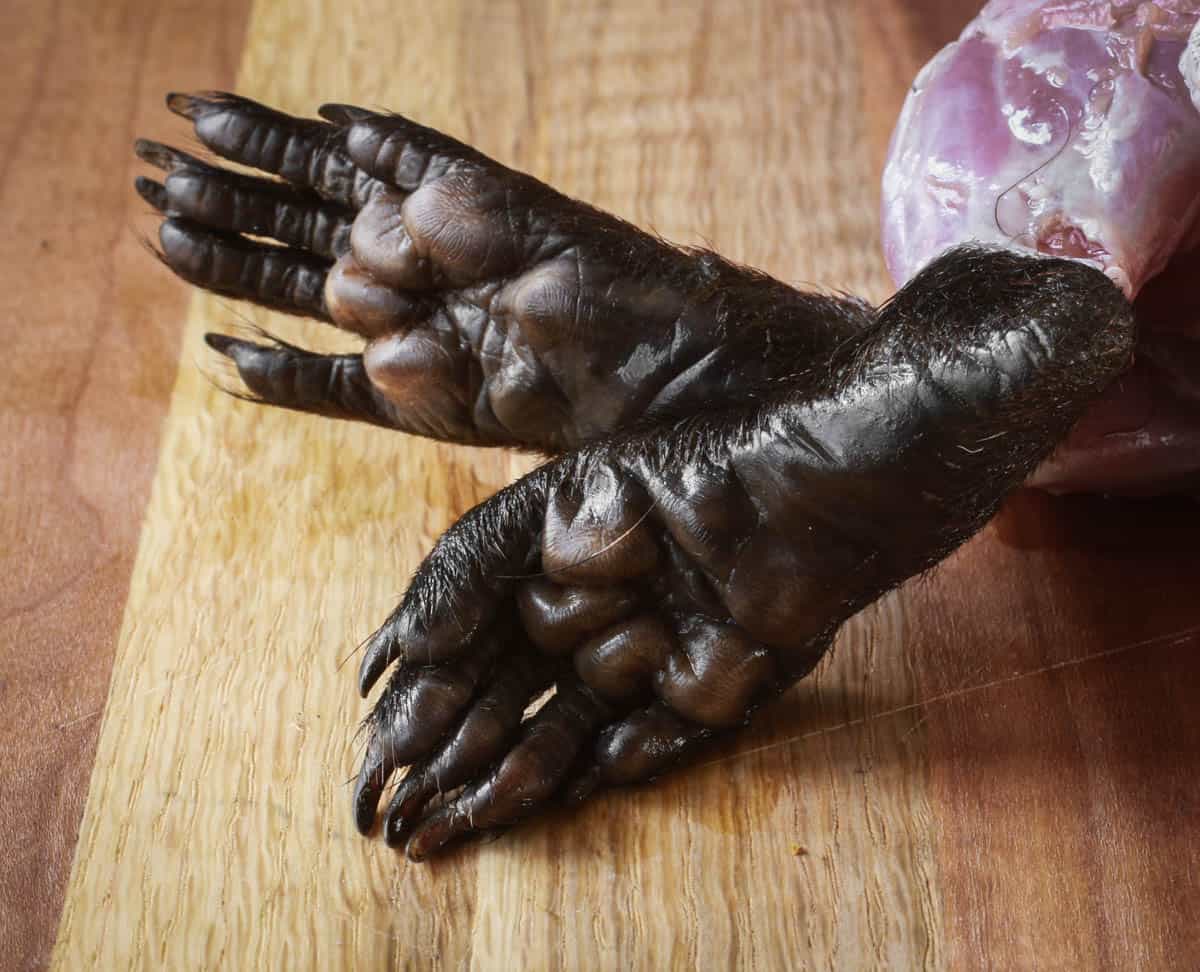 At the farm in Wisconsin, the woodchuck population can be a serious problem, though. The gardens produce a lot of the food people depend on to eat. Groundhogs can eat a lot of produce, up to 25%-33% of their body weight per day according to what I’ve seen, and they ramp up the amount of what they eat in the summer and fall to prepare for hibernation. This means they gorge themselves on everything they can get their little black paws on. 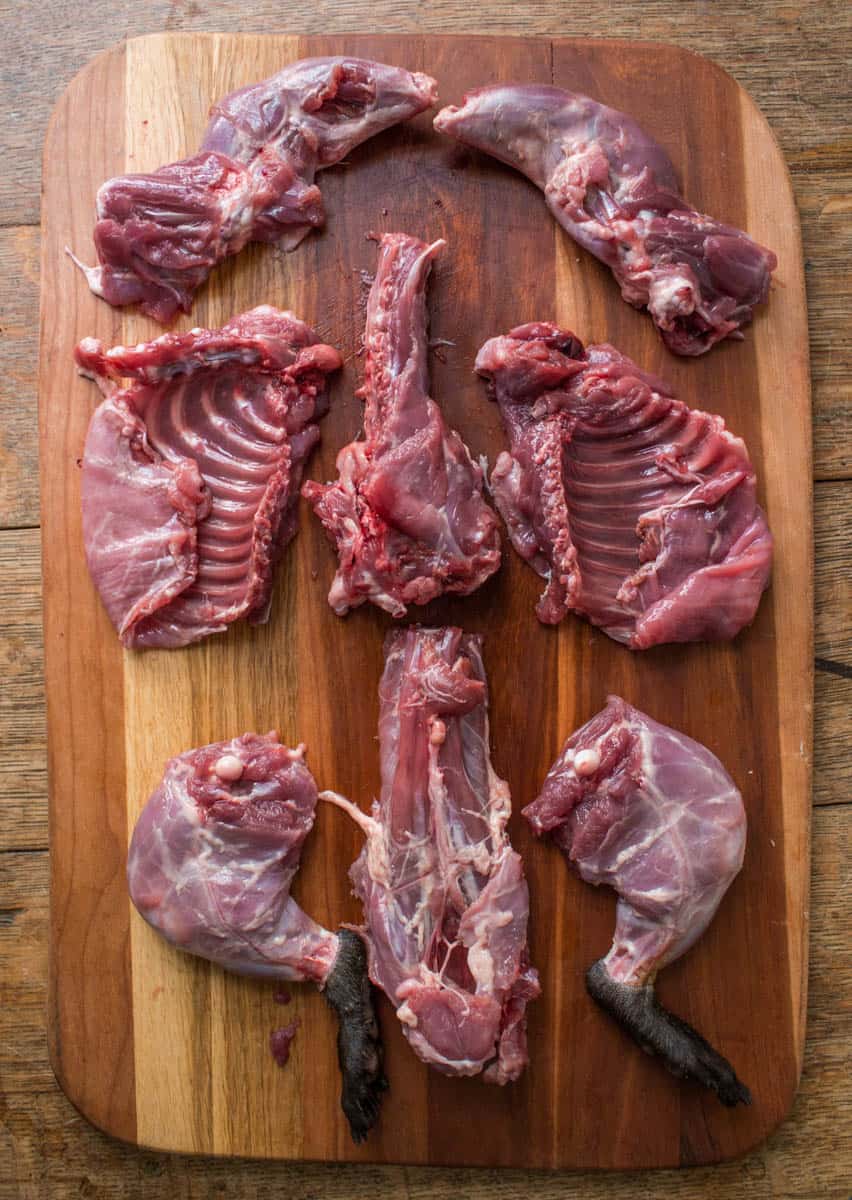 Cutting the woodchuck into fryer pieces like a chicken or a rabbit makes them easier to cook evenly and fit in a pan.

My girlfriend’s step dad is a talented handyman, the kind of guy, like my grandpa, who seems to know how to fix and do everything — a man’s man. He’d been setting traps around the gardens to catch the garden thieves. Since he was determined to trap these organic-produce-fed woodchucks anyway, I figured he’d be a great source. It wasn’t long until he and I had a bounty agreement on a couple critters, and I had myself a groundhog.

That was the reaction I got from most people when I mentioned it. But when you think about it critically, what people describe as unappetizing is bound in their personal experience.

What’s gross about a groundhog? Is it how it looks? If you ask me, chickens are a lot uglier. Is it the flavor? I thought it was sweet, like porky-rabbit, a lot better than the squirrel I’ve had. There’s a tenderness to the meat that I don’t usually associate with game, too.

Groundhogs eat plants, and in this case of this particular woodchuck, he was eating cabbages, lettuce, squash corn and leafy greens, stuff I like to eat. I had a hunch that this woodchuck being fed on garden plants meant the meat would have a rich-yet-mild flavor, and it did. Eating something like a possum, racoon, or a bear, or other animals that also consume meat, will give the meat a different flavor. Typically herbivores will have more mild tasting meat-so those are the animals I look out for. 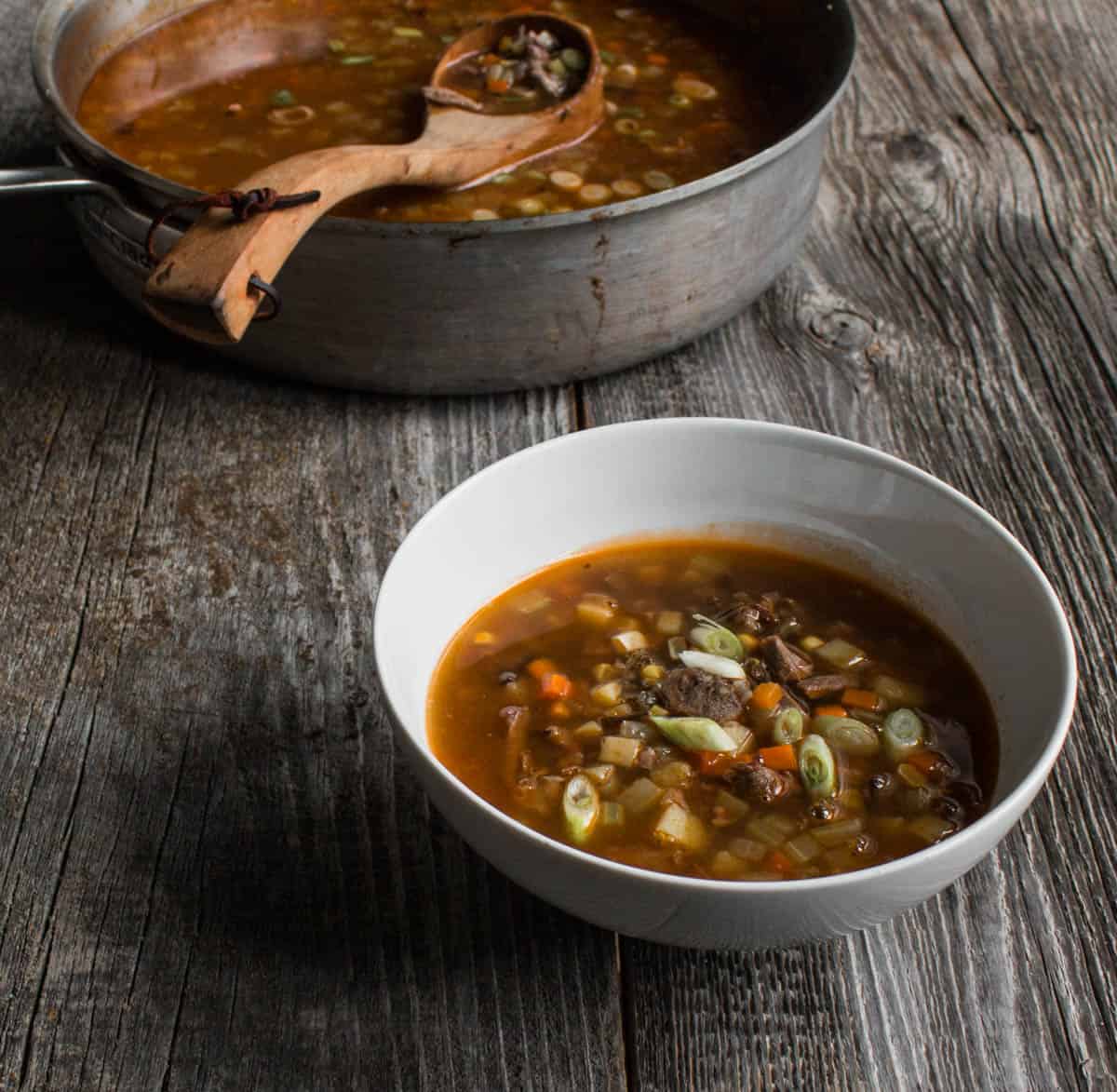 Marinate the woodchuck, brown it, braise in stock, remove meat from the bones, then sweat some diced vegetables, add back the meat and cooking liquid, along with some rice, season it up, and voila. Have some good bread around, you're going to want to wipe the bowl clean.
Prep Time12 hrs
Cook Time30 mins
Course: Main Course, Soup
Cuisine: American
Keyword: Groundhog, Small game, Stew, Woodchuck
Servings: 2

For the Groundhog Stew

Browning and Building the Stew

You could substitute another small creature here — rabbit, turtle, duck or goose legs would all be great. There are probably some other little creatures I don't know of that would be good too.
Previous Post: « Wild Mushroom Tartine with Purslane and Pickled Vegetables
Next Post: Lobster Mushroom Pavé »