I've always loved Halloween, and I usually do something "seasonal" when it comes around. As a disclaimer, I have to tell you that if you're one of my vegetarian or vegan friends, you'll probably want to skip this one. If you eat meat, and you appreciate the interesting odd tidbit, you may find it interesting, as I did.

Most of you will know that there are a lot of deer in America, and that human-deer conflicts from overpopulation can be an issue in some places. In a way we've created a new, almost perfect habitat for wild creatures to find food. We all know racoons are adept at opening garbage cans. Squirrels love nuts, but also don't mind a slice of old pizza.

Bears (on my mind as I'm getting ready for an off-grid trip into the British Canadian Wilderness as I write this) are well known for being adaptive carnivores. And, as my hosta-growing neighbors can tell you, an urban garden and landscaping is a just a giant, 24-hour salad bambi bar.

I'm not even going to try to tackle arguments for or against urban hunting/culling, overpopulation, or the destruction that deer can rue unchecked on local ecology (the more pressing discussion as opposed to ethics, in my mind).

Those arguments are far too deep, sprawling, and often too opaque to cover in 1000 words or so. I do believe that the actions of man have made it so that the population needs to be kept in check, but what the most efficient and humane way to go about that is a gladiatorial arena of opinions and emotions for some.

The reality is that plenty of urban areas have deer culls, and will continue to for the foreseeable future (one location I reference used their cull to donate 8,600 pounds of venison to food shelves-a good byproduct I think). What I'm talking about today involves something much more focused on the meat of deer itself, and the timeline at which they're harvested.

In Wisconsin and Minnesota, the deer season runs (roughly here, including archery) from late September to mid November. In places where urban deer culls are held, the season may not be in the fall, it might be later in the winter, or nearly spring, or, as in the case of the cull at U-M Dearborn I link to at the end of this post, over Spring break.

Mating season of deer should be around October-Dec. When a hunter harvests a doe, the last thing they probably think about is if she'd been with a buck. If you harvest and butcher one of those does in the spring though, the butchery can be, ahem, more interesting.

So, just so happens I have a friend in Virginia that participates in his local urban deer cull, and it's in the spring. And, for the past few years, the does he's harvested have had some extra baggage in their unborn fetuses. So, he sent me one to cook. Thanks Mark.

I've always been fascinating by the odd, unusual edible, and, I'm also a passionate consumer of offal and organ meats, so, it's honestly right up my alley. What I really wanted to know though, was if there was a tradition of eating unborn animals around the world I could find. Besides a casual Reddit mention, I can't.

But, humans, enterprising beings that we are, have undoubtedly eaten them, although the only historical anecdote I've come across is Indigenous people cooking buffalo fetus for the elderly who have problems chewing. At the end of the day, meat, is meat.

Unpacking the cooler my friend overnighted me, I found a little vacuum sealed bag with what looked to be a squirrel inside. For all intents and purposes, I'd assume you could cook a small fetus of similar animals of similar size as you would any small game. And small game is exactly what my unborn deer tasted like.

The big question. If you can get past the aversion, which, is, to be blunt, an inculturalized phobia other (non-American) people around the world probably wouldn't have a problem eating, a deer fetus cooks up like a squirrel or other very small game, and tastes like meltingly tender deer veal. I found it mild, extremely tender and pleasant.

Imagine eating the most tender confit you've ever had. It is in no way strong tasting like organ meats or offal. I ate all of it's organs to compare them with other small game, and found them near-identical to rabbit and squirrel offal in taste, which are all mild and delicious. I often compare small game offal to poultry organs (chicken, pigeon etc) as their size and taste is pretty similar.

Everything is mini, and in the process of being formed at this stage, including the skin, which feels a bit like a layer of translucent fat, and, although it won't render out anything noticeable, at least from my experience, seems to really insulate the meat and keep it extremely moist. it was delicious, and seemed to melt into the meat per caul fat.

The tiniest of bones

One hurdle will cooking small game is that the bones can be tiny and hard to keep track of. With rare exception, I do not like bones in my soup and I find it off-putting, as will any average dinner guest.

That being said, as it was the size of a large squirrel, it wasn't going to make a huge meal. With the higher proportion of bones, barbecuing it and slapping it on a bun wasn't going to work, so I turned to a classic small game recipe: the ol' Brunswick stew.

Brunswick stew is traditionally made with different types of small game, so it worked out just fine. To bulk the meat out I added 2 smoked pigeons from the freezer, rounded it with some of my favorite heirloom tepary beans from Romona Farms.

I also replaced the now common ketchup or barbecue sauce with a dash of birch syrup and some canned tomatoes. It made for one of the most interesting meals of small game I've had to date. If I'll do it again, I don't know. 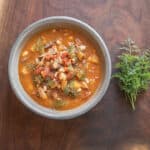