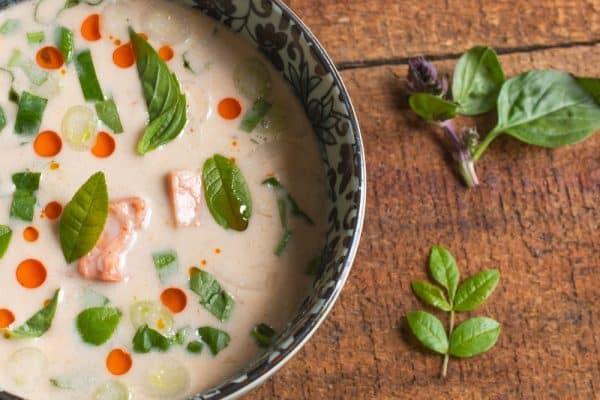 Oh this is a good one, and a recipe for chicken of the woods (or other wild mushrooms like hen of the woods) I've been meaning to get up for a while. Tom kha gai is a classic Thai soup typically using chicken, mushrooms, coconut milk, and a few aromatics. It's a well known soup, and, I'll probably get some flak for my interpretation here, but it's ok—I did my homework here, and this is how I like to make it, Westerner that I am. I'm lucky to have a great selection of Asian markets near me that supply all the traditional ingredients, if you don't, you might have to get creative.

One of the biggest flashpoints that seems to come about with Tom Kha Gai is the ingredients, and paying homage to how they're represented by the name. Here's how the name breaks down:

What does tom kha gai mean?

I don't speak Thai, but I know how to use Google translate, and this is pretty straightforward. My takeaway is this: if your tom kha gai isn't a soup, if it doesn't include galangal, and if there isn't some kind of protein that could resemble chicken, you might want to just call it curried coconut soup instead of invoking the traditional name. 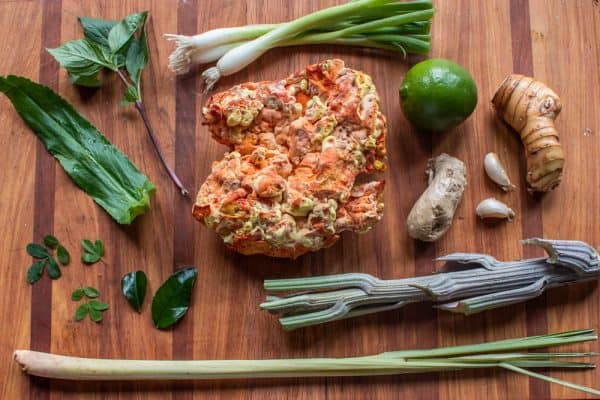 Ingredients for my soup. Culantro, Thai basil, scallions, lime, galangal, ginger, garlic, chicken of the woods, burdock stalks (optional) lemon grass, kinome leaves and lime leaves. You can substitute plenty of things, but I'd keep the galangal and lime leaves if at all possible.

Use fresh galangal for the best flavor

The fresh galangal is really the key here to me, well that and having some fresh kaffir lime leaves (fresh lemon leaves or lime leaves can work in a pinch). Asian markets often carry both of these fresh or frozen, so, if you have an Asian market near you, don't just do the cop-out and buy some ginger--do the right thing and at least try it first with fresh galangal. Fresh galangal is much more floral and aromatic than ginger, and although they look similar, they're very different. Galangal also won't lend heat to a broth as strongly as ginger will, so you can use it with a heavier hand without worrying about it getting overpowering. 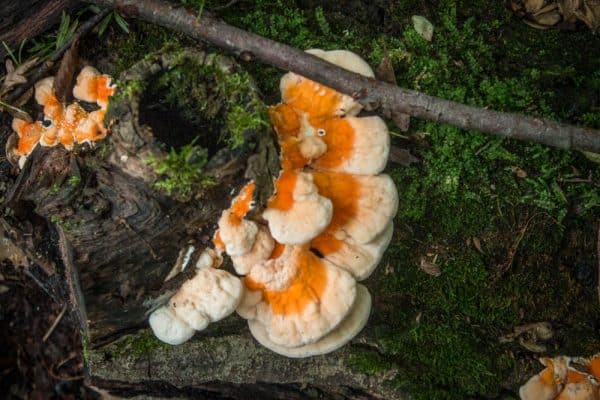 Laetiporus cincinnatus chicken of the woods are my favorite, if you can find some, use them.

Chicken of the woods, instead of chicken

Other than the galangal, I think it's fine to use some creative liberties here, especially where the chicken is concerned. Obviously chicken is good, but chicken of the woods mushrooms work really well here as a substitute or in combination, especially with their pretty orange or reddish color (reddish in the case of L. cincinnatus). I like combining shrimp with chicken too, especially in dishes with lots of umami flavors like this, so you'll notice there's an option (think of it as a strong recommendation) for using shrimp here in addition to the mushrooms. If you can find shrimp with their shells on, grab them, as they'll add great depth to the broth.

Get creative with garnishes

Fresh garnishes on soups like this are one of my favorite parts, and you'll see that I've listed a few options here. One that you won't see in other traditional recipes are prickly ash leaves. I have a couple prickly ash bushes that make leaves that actually taste good, so I use them here as you would use kinome leaves in Japanese cuisine. Only young leaves are used, and just a few on top at the end. Feel free to omit them. 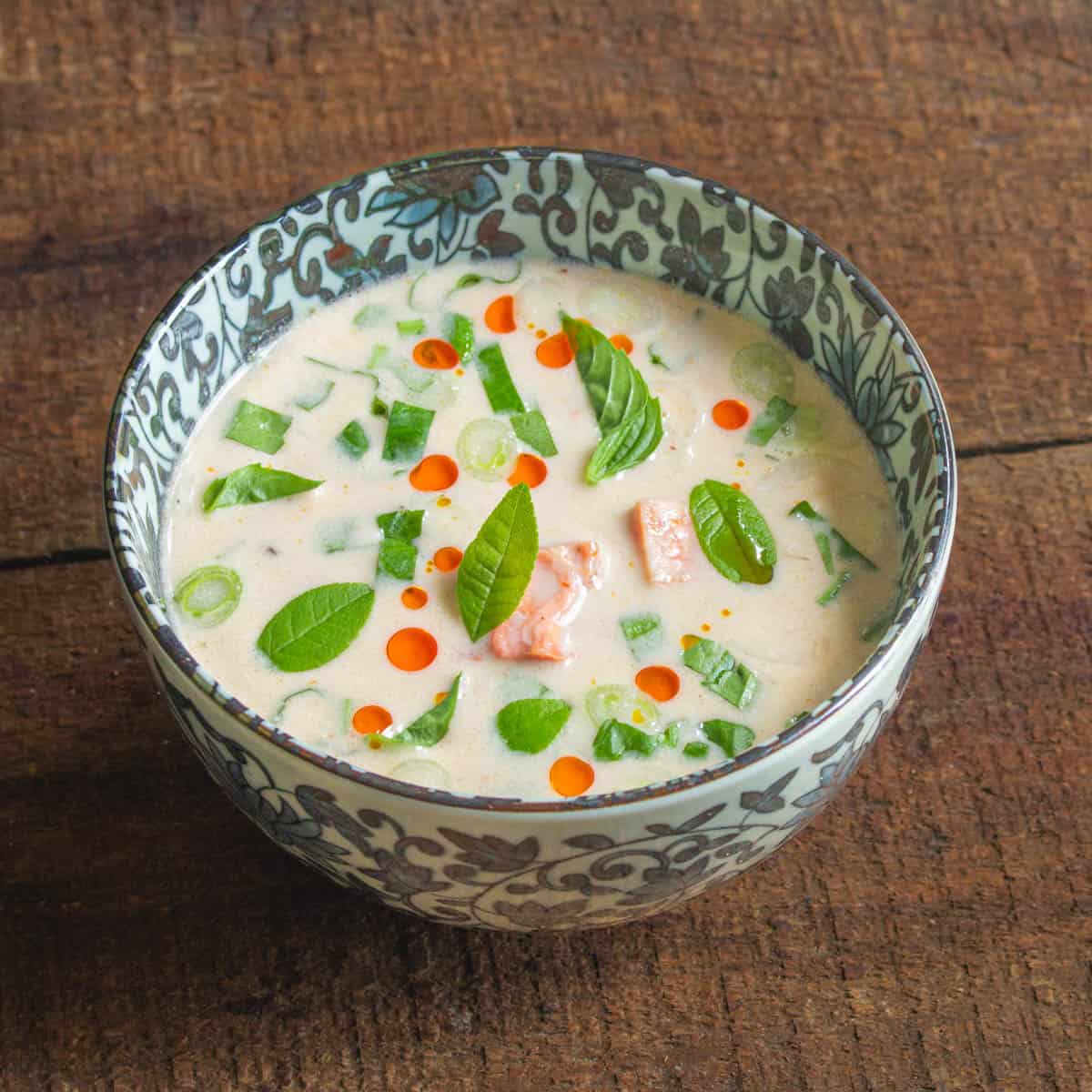 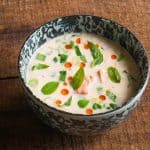 A traditional Thai soup of mushrooms and coconut milk with aromatic herbs and red Thai curry. This can be served as a soup, or with rice as an entrée to serve 4. As a soup it will serve 2 with leftovers. If at all possible, you need to find the fresh galangal here.
Prep Time20 mins
Cook Time25 mins
Course: Main Course, Soup
Cuisine: Thai
Keyword: Chicken of the woods, Curry

For the traditional spice bouquet

Garnishes (pick and choose here, and make it your own with what’s available, with the exception of the lime juice, which is not debatable)

Turn off the heat and add the lime juice. 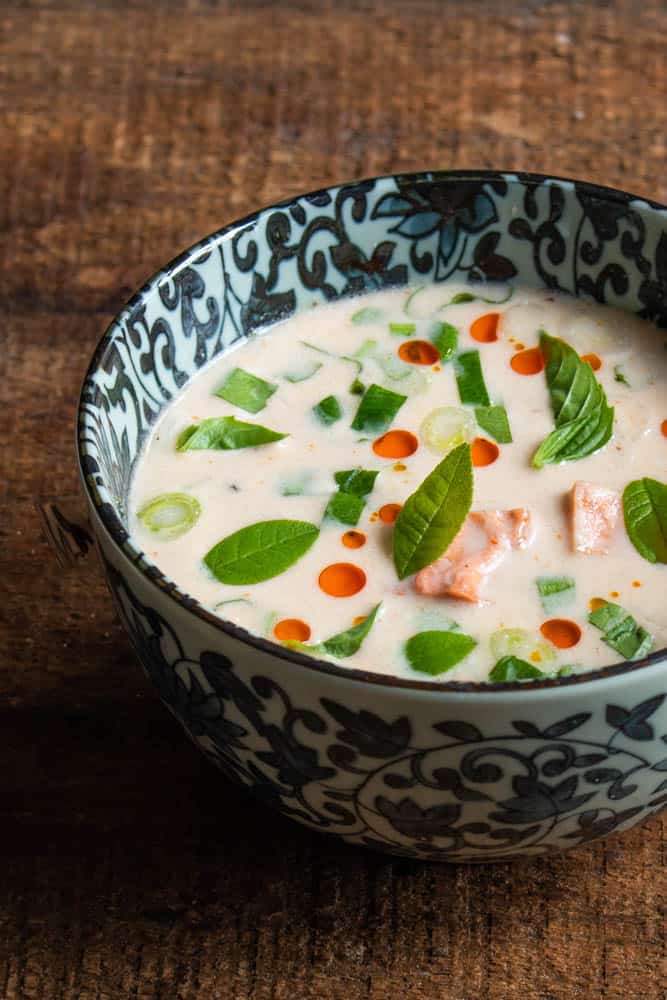 « Chicken of the Woods Wild Rice Casserole
Can You Eat Wild Mushrooms Raw? »