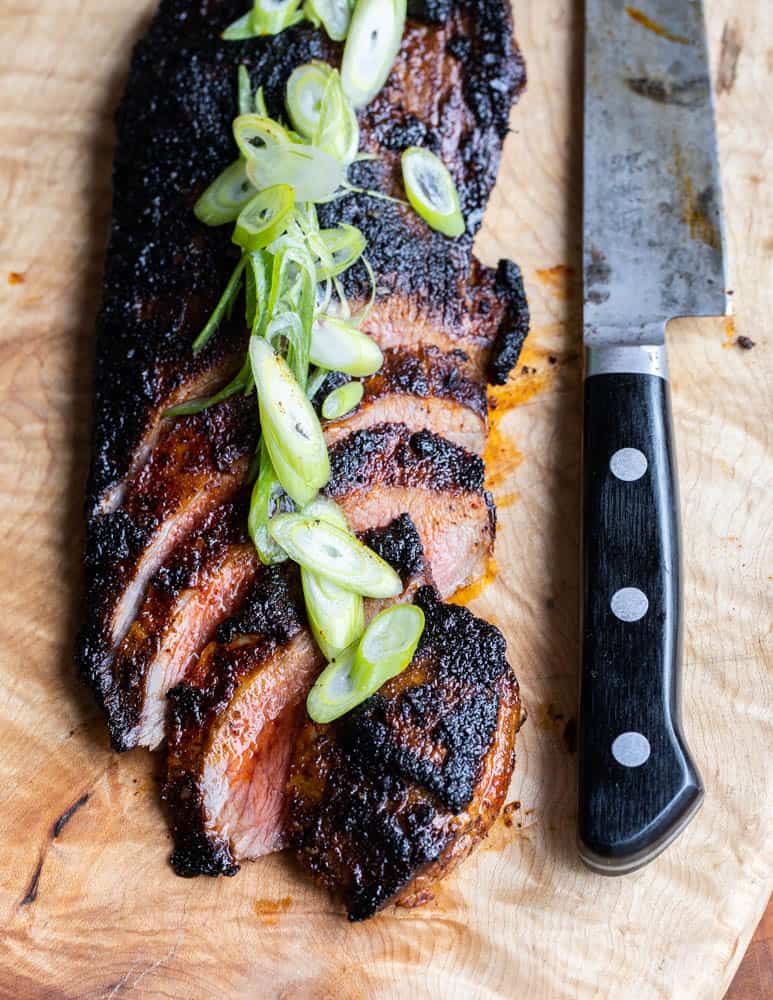 Venison flank steak is a cut of meat that every deer hunter should know. This cut is one of the more under-used cuts on the deer, and it's easy to see why.

During butchery and gutting, it's easy for it to get bloodied and unattractive, but more specifically, I think one of the reasons this cut isn't on a lot of hunters' radars is that it's attached to the belly, which has a very tough piece of sinew that runs through it that even the slowest of braises will not make tender.

Thankfully, it's easy to remove the flank in one piece from the belly, and, even if it's bloody, a little soak and scrub in warm water should clean it up just fine.

This is another reason the flank might be overlooked or simply tossed in the grind pile. Flank steaks are not thick cuts of meat, and for the best results you'll want to trim them. 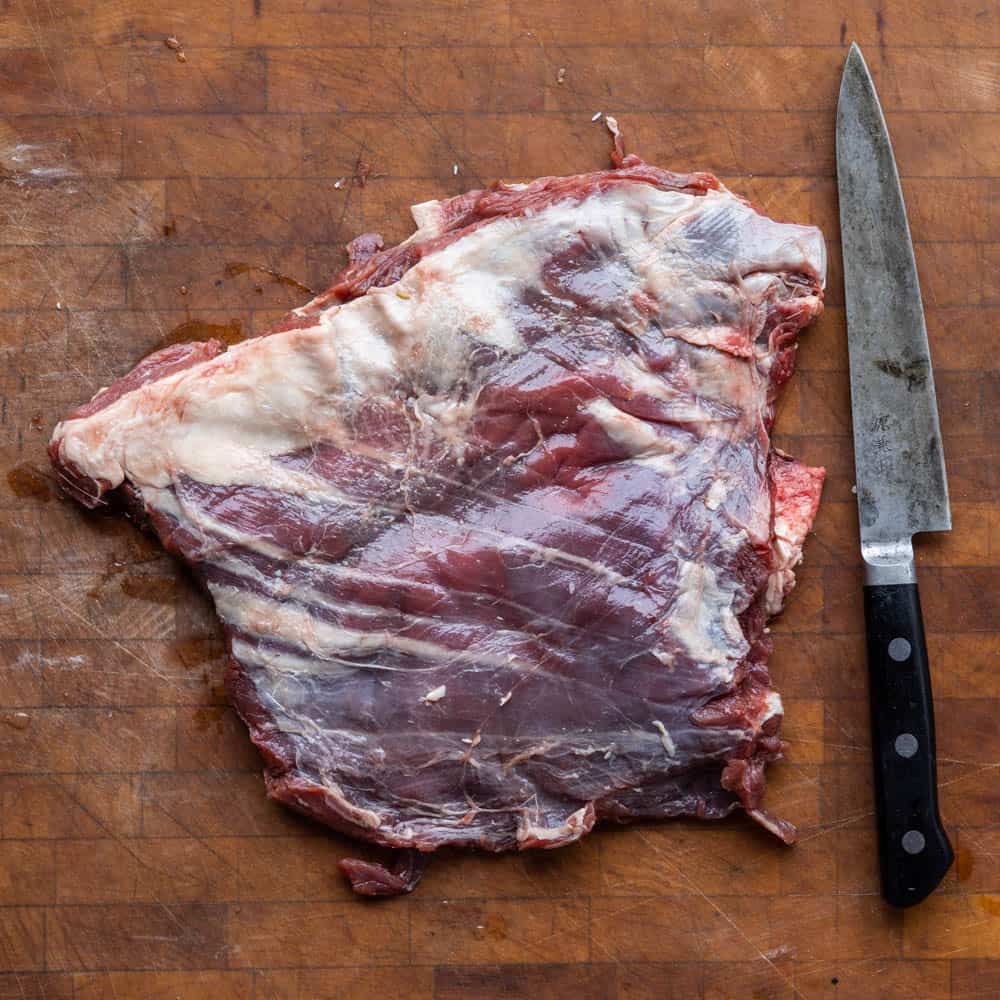 A large flank from a whitetail buck, untrimmed. 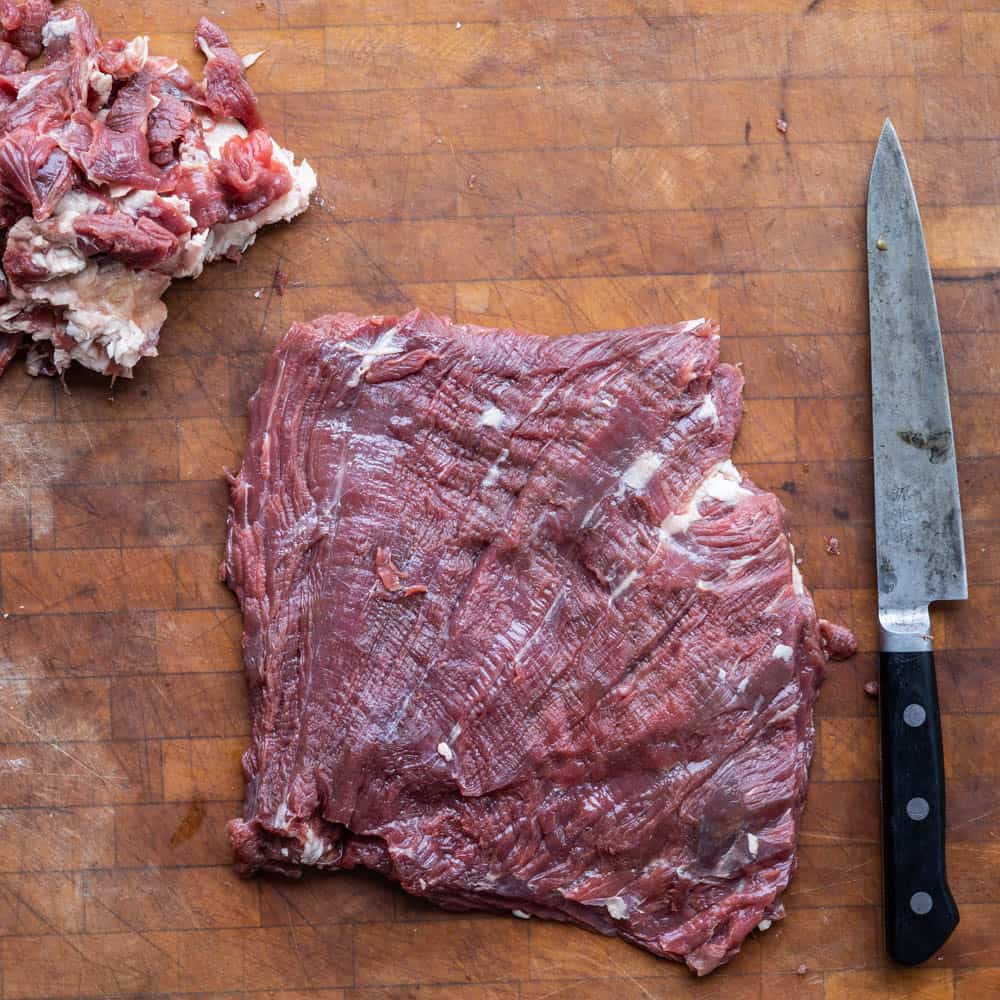 The same flank after trimming.

But, depending on the size of your deer, trimming the silver skin off that will make it bow and cup while cooking might not be practical. That being said, if you cut a flank steak from a smaller deer, it will still taste good, but it may curl a bit while cooking and brown unevenly. Nothing some blackening seasoning can't fix.

This is not ideal, but, if you have a smaller deer, it may be practical. Muscles not trimmed of their fascia will  bow and brown unevenly, but a flank will still taste good. In my mind it's a first world problem, and considering that a venison flank will still be reasonably tender, chewy and delicious, sometimes I may cook them untrimmed if the deer it came from was small. 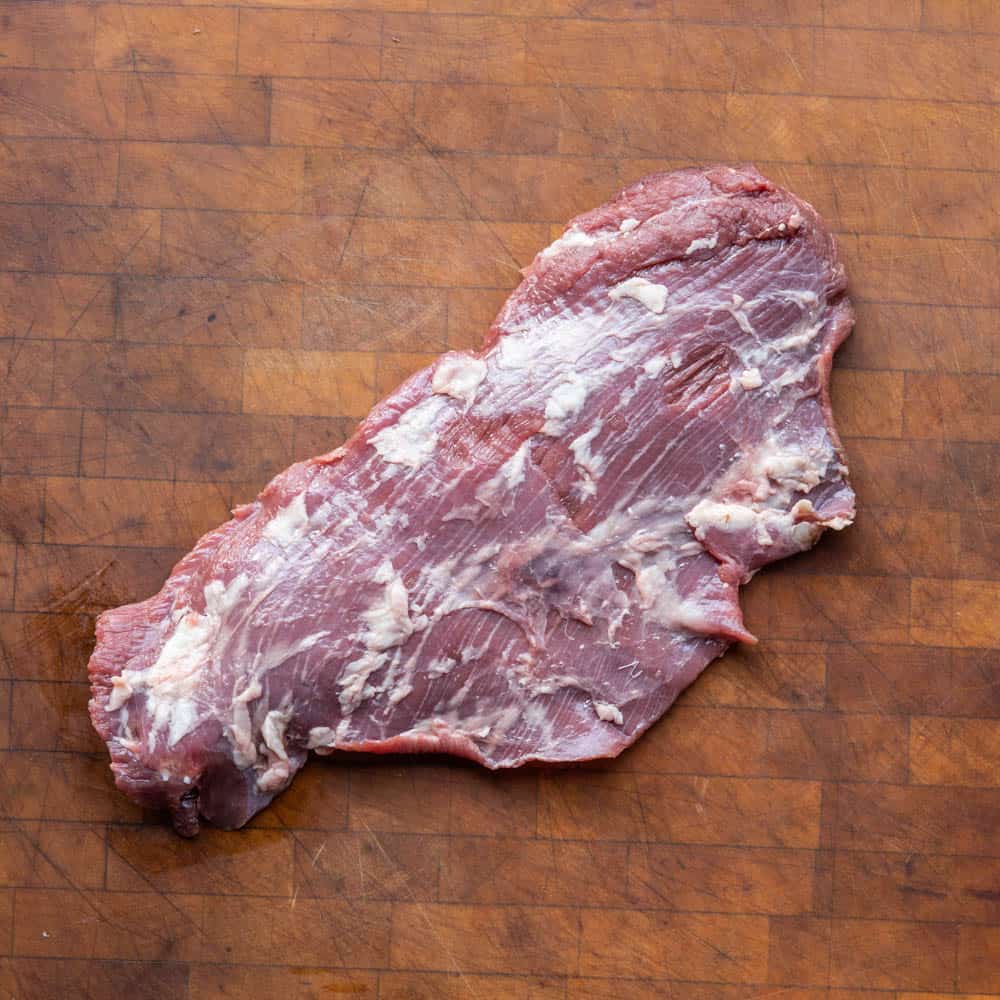 A flank from a smaller whitetail I felt was too small to trim. 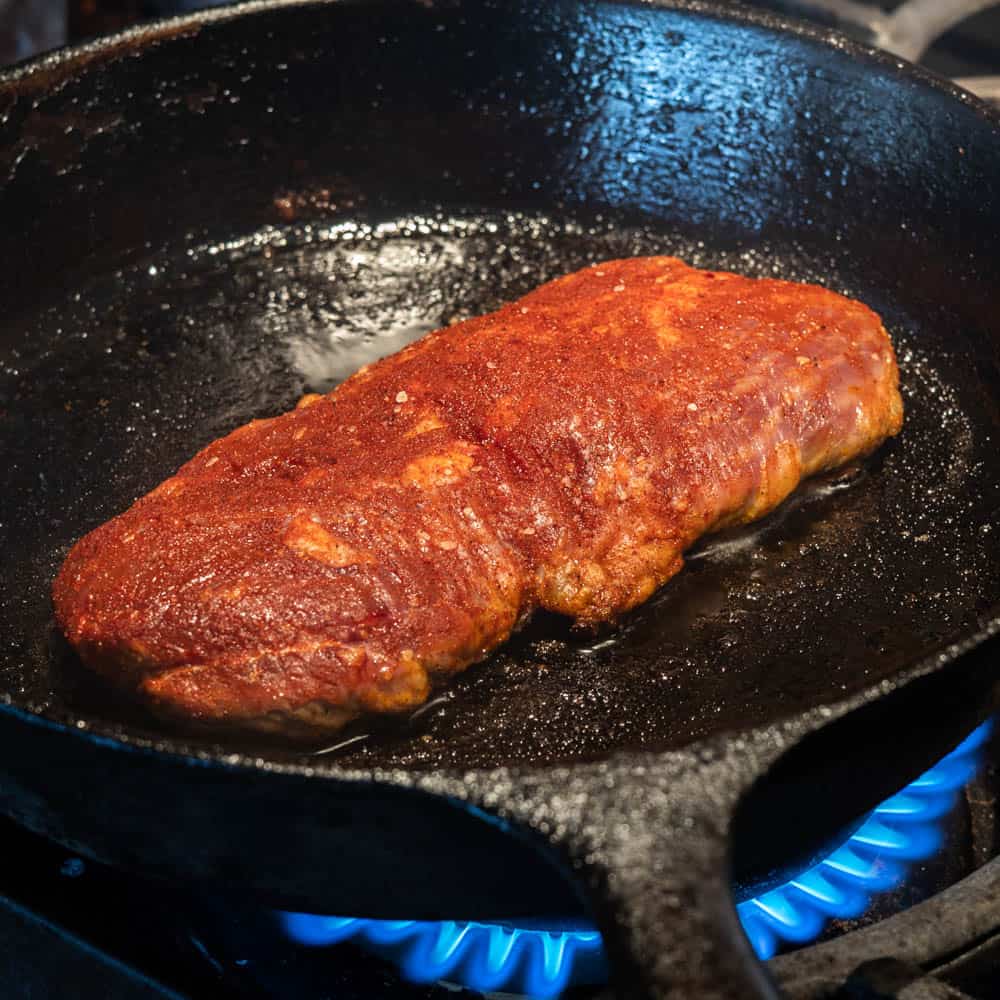 Cooking the untrimmed flank, notice how it's bowed in the center, which will make it brown unevenly. It will still taste good. 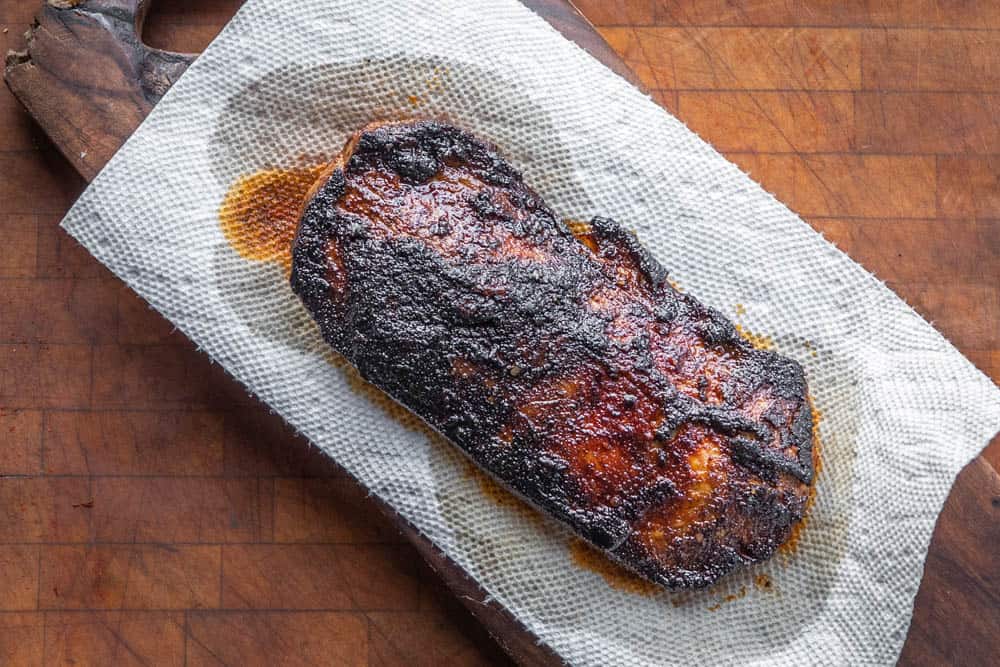 Letting the flank rest on towels for a couple minutes before slicing will make sure it's as juicy as possible.

Flank is a fantastic, quick-cooking piece of meat, ideal for grilling over a very hot fire or searing in a cast iron skillet. Here's a few ideas: 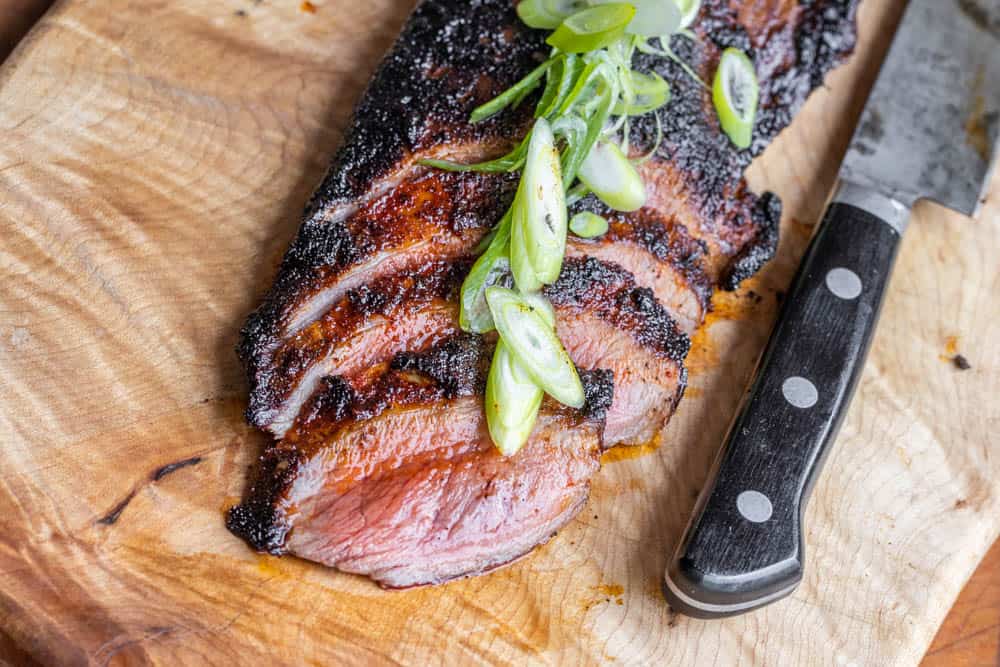