Biltong is a great piece of South African beef charcuterie. If you like making charcuterie at home, or just like a good bag of jerky you’ll love it. Just think beef jerky, but softer, more tender.

If you’re not familiar, biltong is made by cutting meat into slabs about an inch thick, seasoning, with black pepper and coriander seed, and allowing to air dry for 1-2 weeks or so. Some recipes use brown sugar, but that ends up tasting like American jerky from a bag.

Typically the meat used is beef, specifically the cut called the “silverside” in the U.K. or what we’d call the top round. In my case, I cut up an elk, using the same muscle, and it worked like a charm. Other venison, like whitetail deer, will give the same result.

How I make it

The real hack here is using UMAi Dry bags, a high-tech cousin of a vacuum bag that makes it easy to cure charcuterie in a refrigerator at home. Other biltong recipes may call for making biltong boxes for the drying process.

For the curing process, all you need to do is season the meat with the spice mix, vacuum seal for two days, then transfer to the Umai bag and age for two weeks. This is a long time compared to some other similar recipes for biltong and jerky, and other dried meats, but once you taste it, you'll understand.

I cured a few batches of biltong myself and liked it, but, I was inspired to make another batch when I heard on Minnesota Public Radio that there’s a new company called Zambezi in Minneapolis making biltong commercially and shipping it around the country.

The Zambezi biltong is delicious! I ate two bags in a sitting, and then starting making a few more batches of my own with some elk and venison cuts from the freezer.

Unlike longer cured meats like salami, or whole muscle cures, biltong is much more casual charcuterie, meaning that it I consider it “done” when it tastes good to me, as opposed to having to weight the meat for a specific amount of water loss.

Two weeks of drying was just about perfect for me, but some people may like it dried for a few more days.

It’s totally fine to cut up a few chunks of biltong to eat, and leave the rest in the bag in the fridge to continue curing, enjoying them at your leisure.

Cutting Against the grain

I know one biltong fanatic from South Africa, and they told me to make sure I mention that the meat should be cut against the grain after drying.

After curing the pieces of meat and cutting into them, it can be a little tricky at first to figure out which way that is, so I cut some both ways to show the tell-tale pattern in the meat you should see.

If you cut it with the grain first, simply rotate your chunk of biltong 90 degrees and slice the other way. That being said, dry cured meat is pretty tender any which-way it’s sliced, but I find it just slightly more tender cut against the grain, which makes it worth taking the extra time to do it, in my opinion, especially if you’re serving to first timers.

Most jerky makers will know that it’s nearly shelf-stable indefinitely after drying. Biltong is a little different. After cutting into a piece of biltong, it will have a slightly shorter shelf life as the inner portion of the meat has never been exposed to air, say a week or so in the fridge.

Uncut pieces of biltong can be frozen for extended periods of time (6-months to a year or more), thawed, and enjoyed with no harm to the texture or flavor.

If you like this, make sure to try my wild fennel seed venison chorizo, and smoked venison neck pastrami. 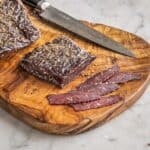 Types of meat to use  I use elk here, but other venison will work fine. As a second choice I'd use grass fed beef, but you can also just use your favorite beef you have access to.