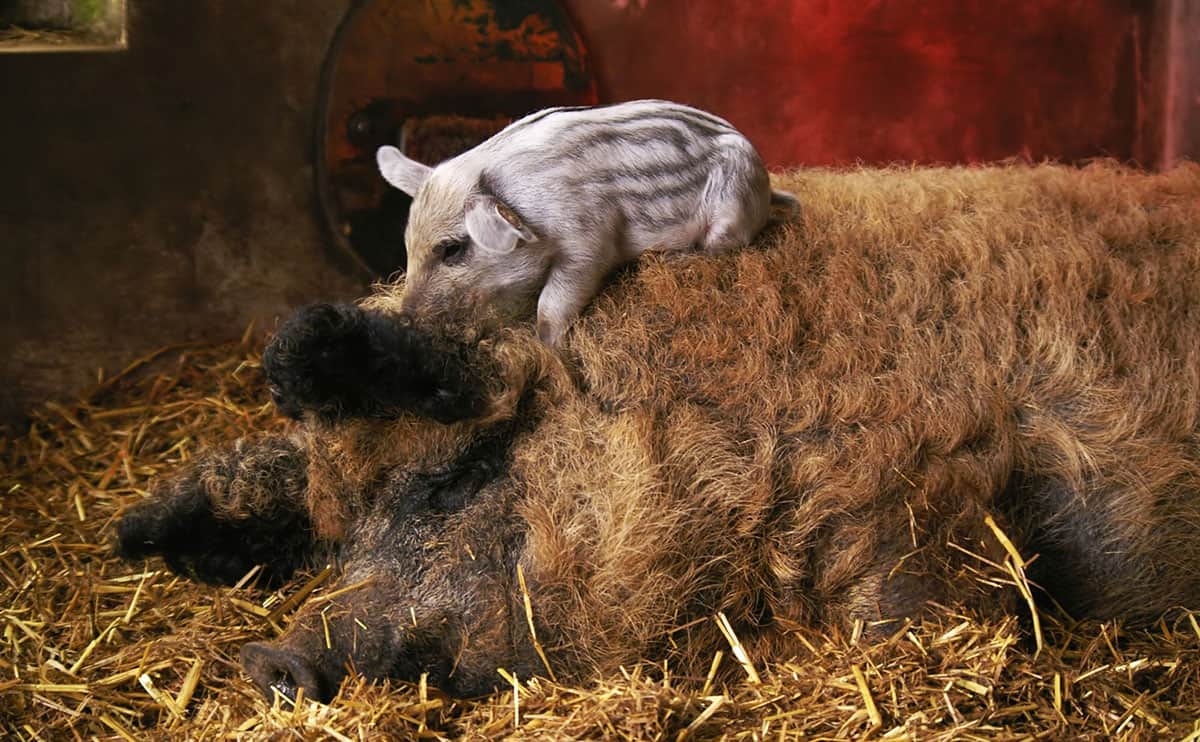 My girlfriend loves to eat great food, and is also a health and fitness guru. Two years ago, while on a water fast out west, I got a message from her about needing to call a butcher. She told me that she'd been craving food (on a water fast, go figure) and decided to buy a whole mangalitsa pig (also known as mangalica) and have it delivered along with a new freezer to the farm. After laughing for a while with jokes revolving around her interesting way to sate food cravings, I called the butcher and walked them through how I wanted the pig prepped. One of the most important things to her was the bellies, as she likes my bacon.

Mangalitsa: a pig raised for it's fat instead of meat

A note quick on pork breeds. For our purposes here, think of pigs as one of two types: (I understand this is an gross oversimplification, farmers please forgive me.) Meat pigs, and lard pigs. In olden days, some pigs would be raised exclusively for the fat they produce after rendering, the cooking lube of life that made every great grandmother's pie crusts flaky, and fried potatoes rich. In a sense, with lard pigs, the meat was a by-product of fat production.

I'd worked with cuts of mangalitsa and other lard breeds before, and I knew what to expect, or so I thought: smaller cuts of meat, a little trim here and there, and plenty of lard to render out. But even with my experience, I was not prepared for this piggy. 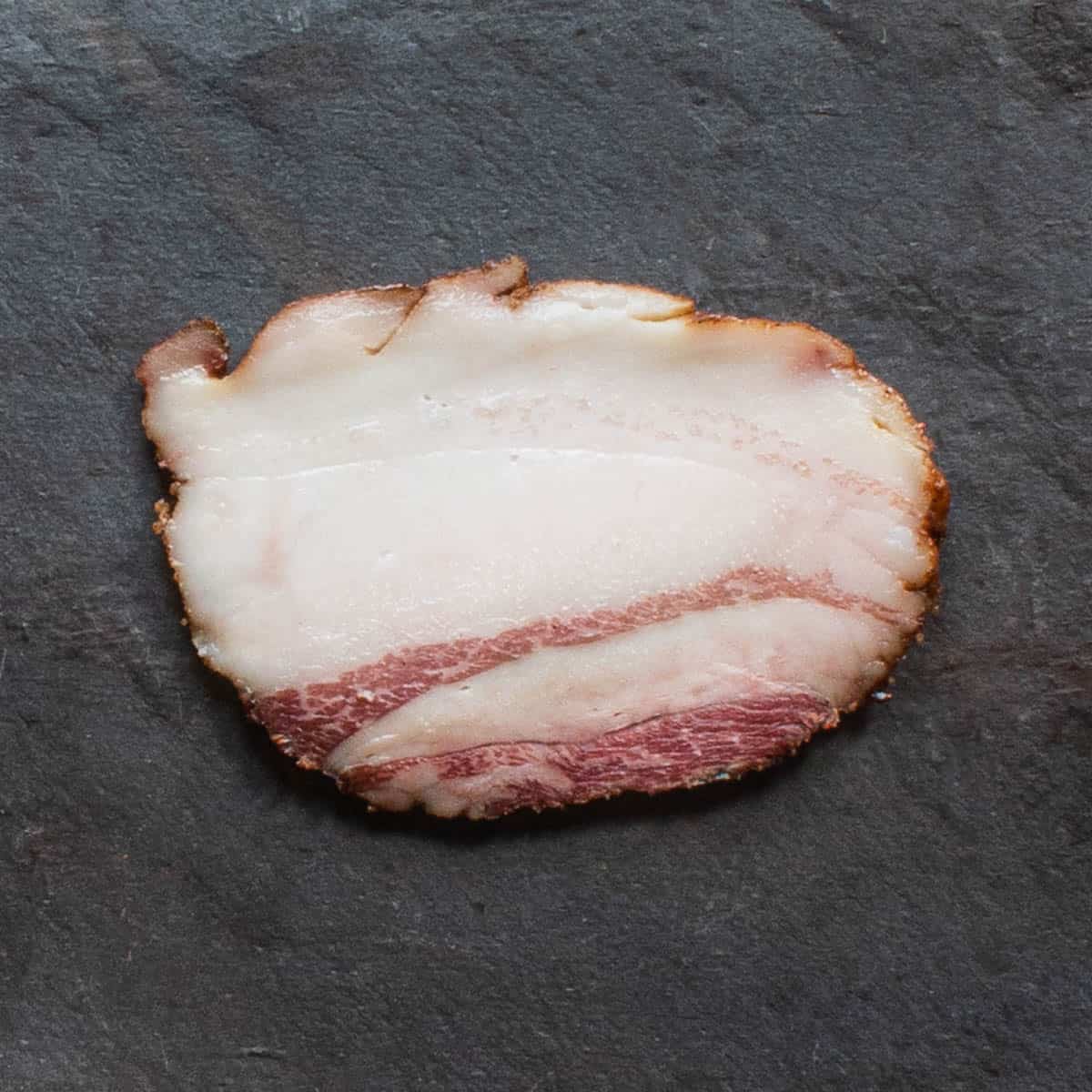 The cured, smoked bacon from the mangalitsa, there's so much fat it's comical, the cap was about 5-6 inches of pure fat.

When I opened up bags of meat from the chest freezer after the pig arrived, I knew something was different from the mangalitsa I'd worked with. The meat was fattier than I'd ever seen, and there was more lard to render than I expected, a lot more, about 80 lbs. The composition of the meat was different too, pork chops were so fatty that they ended poaching themselves in fat rather than searing-I'd never seen anything like it, the ground meat was pure white, with only flecks of meat, and useless for cooking, sans lard rendering.

When I looked at the bellies for bacon, I said something to the tune of "dear god help me". They were comical, fattier than anything I could ever dream of. I took them into the restaurant, along with the bags of lard (We cooked hashbrowns in the manga fat at Lucia's for the entire restaurant for at least 5 months off of the one pig) and had enough to start curing them to make.."bacon".

But why were the bellies so different than the mangalitsa I'd worked with? A couple phone calls later we found out the farmer had been experimenting with the pig's feed, using corn not to finish them, but as their exclusive feed. I was a little frustrated that we'd gotten what I thought of as someone's experiment pig, but I knew it lived a happy life, and in the end that's what matters the most.

Now I had to find some way to figure out how to cook the stuff. The farmer said the next batch he planned to have strictly eating wild things they find, like acorns. That being said, in here somewhere is a joke about 'Mericans eating too much corn. 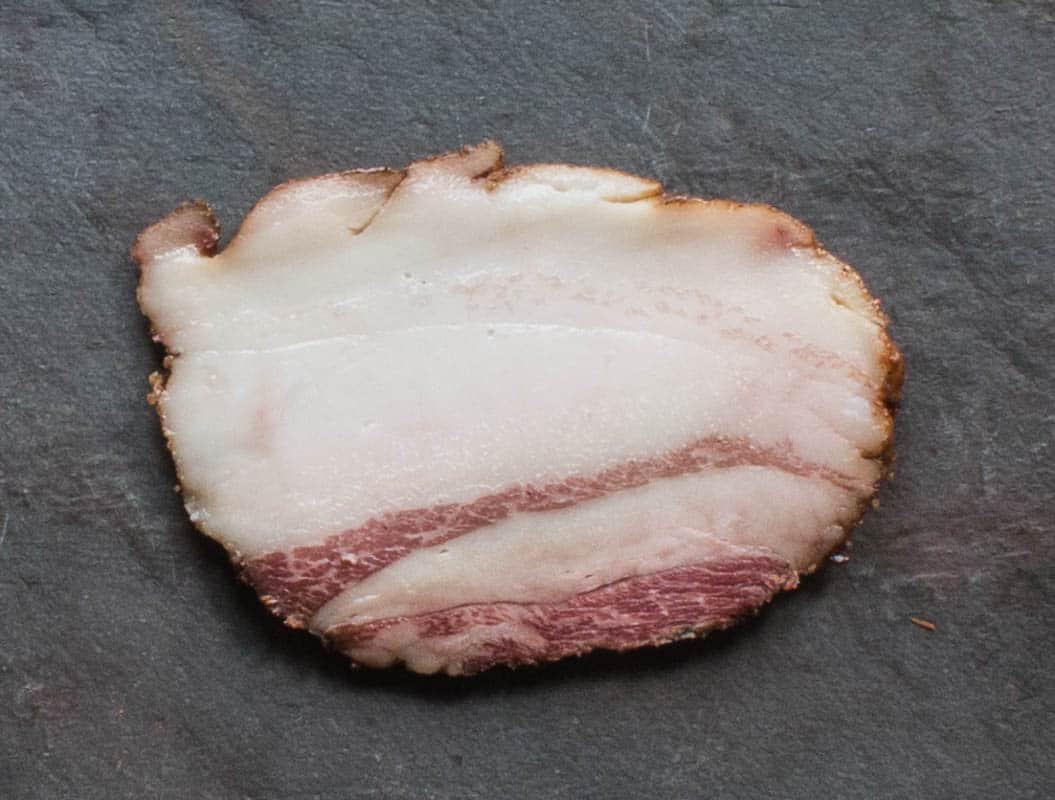 I cured the bacon per usual, then smoked it, saved the oodles of fat that came off, and chilled them down. I cut off a slice and tried to cook some--it was hilarious, basically like eating a warm piece of cured lardo. Getting it to be crisp took a gentle, slow cook, but even then, I could tell my girlfriend wasn't going to be throwing slices of it into her cast iron pan for breakfast. I brought her a slab of meat pig bacon from my freezer in the Cities and traded for some of the mangalitsa, then brought it into the restaurant to see what I could do with it. 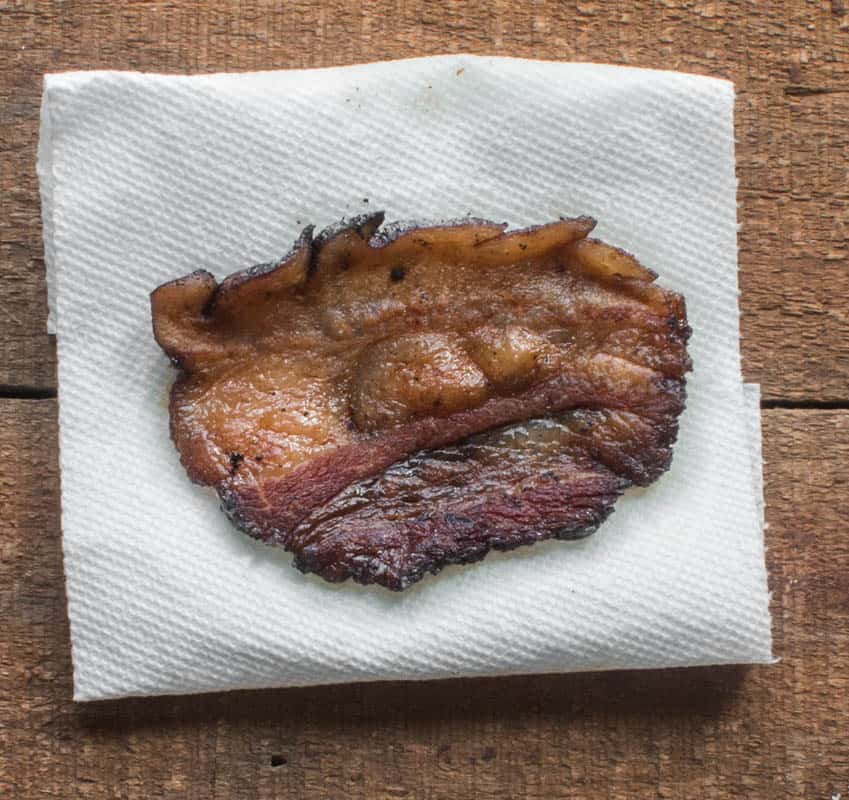 Cooking a single slice to look like this took a lot of time and patience. Baking in the oven was difficult since the fat smoked quickly, spewing into the oven-it had to be cooked pressed under a sheet tray with two layers of parchment.

Eventually I understood the bacon couldn't be treated like bacon, it needed to be treated like lardo. At Heartland we used to wrap rabbit loins in lardo, and it remains one of the best ways I've ever used it. Lardo is raw though, and much more malleable than cooked fat, so my next best option was doing a play on saltimbocca, the old Italian dish of veal slices layered with a sage leaf and prosciutto I was taught to make with my chef from Rome.

After demoing a few trials, using pork tenderloin I had a solid dish. We were able to render out a good amount of the fat after the bacon was sliced paper thin while half-frozen, and what remained offset the leanness of the pork tenderloin-It was awesome. Here's the recipe. 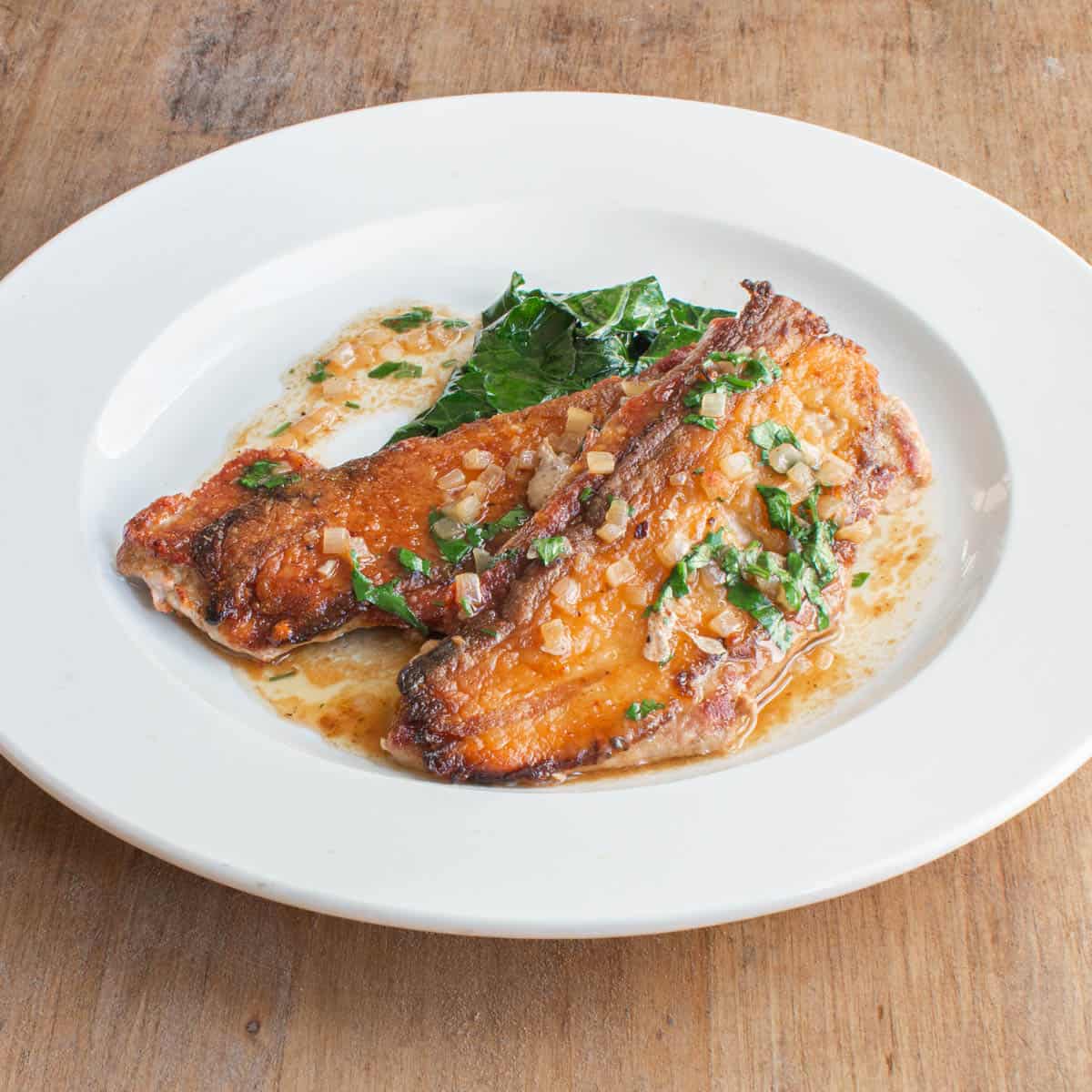 You can use prosciutto here, or any other type of cured meat you can slice very thin. Salami, pancetta, anything with good marbling that can be rendered can make a fun variation on the Italian classic. This is not a strict recipe, think of it as a general guide. Great with some wilted greens.

Serves 4 as an entree