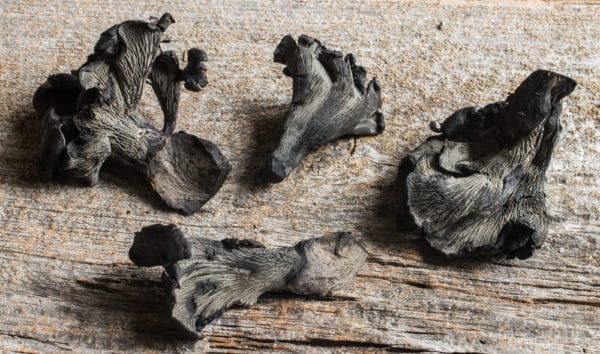 I remember a time when I knew the word chanterelle, a type of golden mushroom French chef’s loved, and, that was it. Even after I cooked my first ones in a restaurant, I still only knew the golds. I knew nothing. I don’t think I could’ve ever imagined how complex and beautiful Nature’s chanterelle palette actually is. The variety of chanterelles and their cousins alone, in our increasingly complex and now genetically vast world of mushrooms, is stunning. 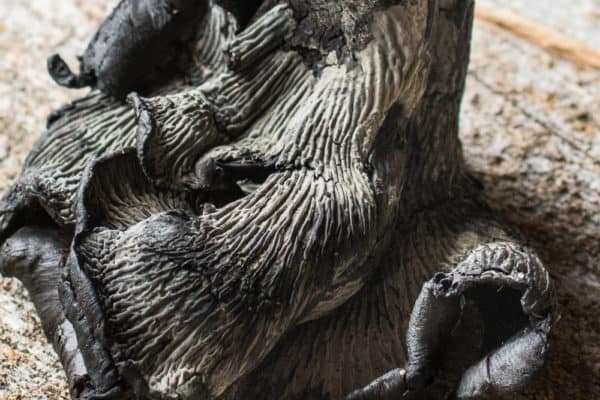 Even though they’re not as closely related as mushrooms from the Cantharellaceae, they still have the tell-tale false gills/folds.

Polyozellus (formerly polyzygus) multiplex or clustering blue chanterelles (they’re more blue-black technically) have been on my list of wild mushrooms to eat for a long time. The only problem is they don’t grow near me in Minnesota / Wisconsin. Being that as it is, I’ve had to resort to letting my mushroom purveyor friends keep an eye out for them, since, for a short period in the fall, around October, you might be able to get some from the Pacific Northwest, with the right connections.

This fall a big box showed up for me, and I was like a kid on Christmas morning. Having habitually read field guide entries on them for years I knew slightly what to expect, and, having picked my first Gomphus this year, I expected the Polyzellus to be similar, as both are chanterelle cousins that specifically grow in a clustered form. Unfortunately this also meant that I wasn’t expected to be blown out of the water, since Gomphus are great, don’t get me wrong, but in a taste test, golden chanterelles will win.

Cutting open the tape, and then the seal on the inner cooler, I opened the box, and held up what looked like a cluster of black hen of the woods, well, more like if a hen and a black trumpet had a baby, and that baby smelled like no other mushroom I’ve ever had. With the gomphus / pig ears I picked, I could smell a little echo of the tell-tale fruity-apricoty chanterelle scent, but it was very faint, even on the really fresh ones I ate this year, and I assumed these would be similar.

With Polyozellus multiplex, the chanterelle family scent is not there, in any way, shape, or form. Instead, the blue chants smell faintly of earth and mushroom, but the most noticeable is a strong, but subtle scent, that, after doing a few blind smell tests with people, I would have to describe as woodsmoke. The smokiness is more than a cute trick too, it will scent food they’re cooked in, especially grains and starches. See my wild rice bake below for an example of that.

I mentioned these were like if a hen of the woods and a black trumpet had a baby. The shape resembles hen of the woods a bit, but their color and more specifically how that color translates to other culinary ingredients, is pretty interesting. Just like black trumpets, the blue chants will stain and color other foods they’re cooked with. They’ll stain the inside of your fridge too, and whatever else is in it, if you leave them uncovered. 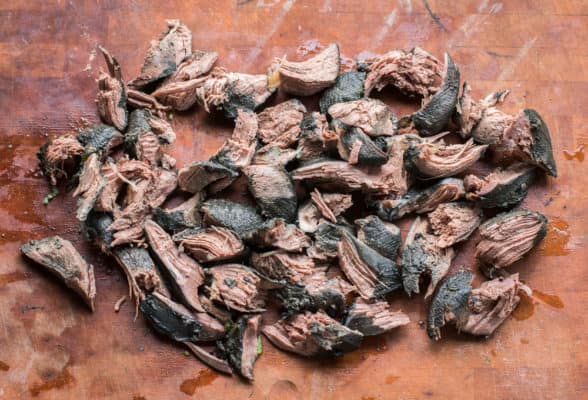 Braising grouse in blue chanterelle stock painted the meat black, just like a trumpet would do.

The texture is really special too. I can’t speak to older or younger specimens as mine were picked for me (this time), but every blue chant I had was, soft, succulent, and I’m not just saying that because they were young, and in good condition. These have a tenderness to them, not a sort of slippery mucilaginous one like a boiled honey mushroom, but a soft suppleness, before and after cooking. I’ve never really tasted anything like it, but a decent parallel is how very young hen or chicken of the woods are far more tender in the very young stages before they create leaves/fronds. 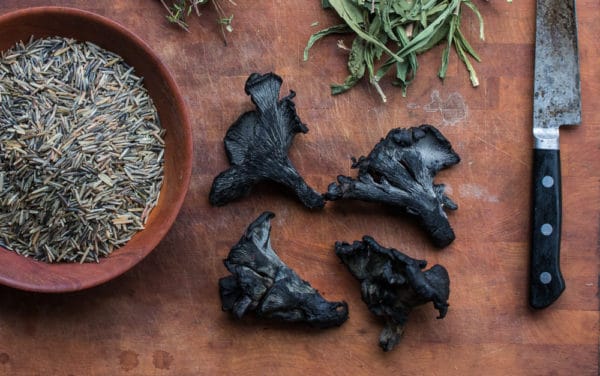 Cooked with some parched wild rice, the mushrooms perfumed the entire dish with their gentle woodsmoke aroma.

Cleaning was a breeze with these, a pine needle there, a leaf there, it was easy street, just like a lot of mushrooms from the Pacific North West. For trimming and eating, I usually peeled or cut the clusters into little hunks for cooking, making sure to have large pieces as opposed to smaller. Roasting whole, cleaned clusters whole was good too, like I do with hen of the woods, should you be lucky enough to find whole clean clusters. Interestingly enough, they’re soft texture made very good jerky, even better than hen of the woods in my opinion, which is by far the most popular species for jerky preparation.

The soft texture of blue chanterelles makes for excellent jerky. I preferred it to hen of the woods!