Here's a selection of my favorite knives. Whether you're looking for the best gifts for mushroom foragers in your life or shopping for yourself there's a good selection here. I break down the differences between some of the most well-known brands, and other, more obscure ones.

Every knife listed is one I use personally and no company has paid me to say anything here.

When I started hunting mushrooms, I got overly excited about getting to explore new knives, those made, and that could be used specifically for mushroom hunting. It was like giving a new drug to an addict. The question always lingered though: what's the best knife for mushrooms?

You don't need a sword

At first, I had some pretty hilarious ideas about what made a good mushroom hunting knife. I spent hours online reading reviews, measuring and comparing, and obsessing over silly things that looked more like Renaissance festival regalia than something I could actually use to harvest food.

Pretty funny when you consider one of the most famous mushrooms hunters in the U.S. brings plastic picnic knives on planes when he goes on out of state forays.

"You're hunting stationary mushrooms, not defending yourself from a lion attack while tracking wildebeast in the Serengeti."

Ten years after embarassing myself, I have some really solid advice for anyone that's looking for the best type of knives for carrying outside, and harvesting mushrooms. Let's just say it was a lot less complicated than my juvenile, and kitchen-addled brain thought.

First, here's a couple broad points about mushroom hunting knives, as I see it.

The Best Mushroom Knife is Small, Compact, and Lightweight

This is the biggest thing to consider. You're hunting mushrooms, not 1000lb antler-toting animals in the Mountains, and the knife should reflect that.

At first, for me, still buzzing off a record year where I cut 50lbs of chicken of the woods mushrooms off of one tree and about the same weight of hen of the woods, I bought a handsome skinning blade from Puma, and the monstrosity pictured below from a company in Russia.

After getting made fun of at a foray by older hunters, and a couple awkward looks at gas stations with a 6 inch pewter boar handle protruding from my belt while hunting a candy bar, I learned.

Moral of the story: less is more, now, I've downgraded my collection to only the smallest knives, unless I have an actual deer to skin, which only happens in the fall.

At first, with my kitchen experience, I thought only fixed-blades would do. Again, remember you're hunting stationary mushrooms, not defending yourself from a lion attack while tracking wildebeest in the Serengeti.

That being said, I do like both fixed and folders for carrying in the field, but I keep them small, compact, and concealable. In short: the Buck 102 is the best fixed blade knife I've ever owned, and the opinels can't be beat for lightwieght folders.

In no particular order, here's my top 6 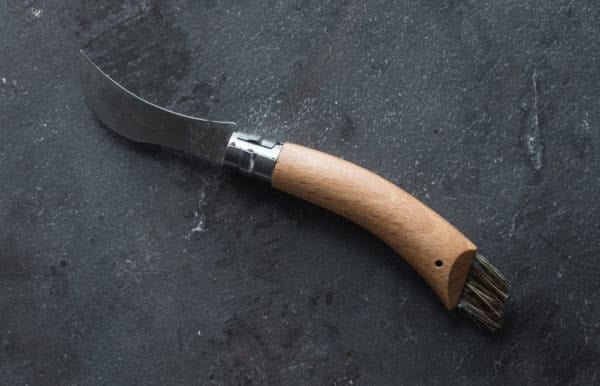 There's probably no blade more widely known for mushroom hunting than the Opinel mushroom knife. Just like it sounds, this is an actual design made for picking mushrooms, with it's curved blade and brush on the opposite end.

At first I didn't know about the brush, but it's nice to have, especially if you're picking mushrooms growing in pine needles or leaves like Lactarius or Lobsters.

The curved blade is ok, but it won't stay as sharp as the Opinel no.8 carbon above. But, at the reasonable price of around 30$, every mushroom hunter should have one of these.

Don't be fooled by look-alikes either, there are a lot of similar-looking, and cheaper brands out there, but they are often too heavy and awkward, with thick blades that are hard to sharpen. (See what not to buy at the bottom of this post) 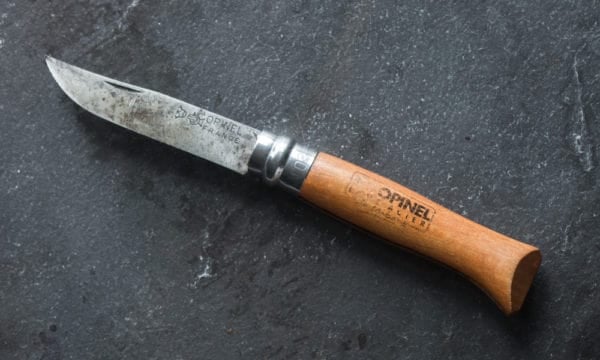 This is the most common knife I carry besides the Buck 102 below. This Opinel style is feather-light, classic carbon steel. New to carbon steel knives?

Just know this: it will get a patina, needs regular cleaning and attention to ward off rust, but it will hold an edge better than any stainless steel knife you've used, and the edge is easy to put back on since the steel is soft.

I've had mine for 10 years and it's still a razor, not to mention it's cheaper than a hamburger. 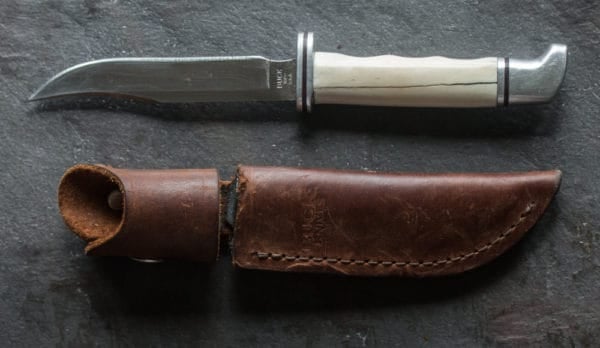 This is on my hip as much as the Opinel no.8 carbon. Buck's one of the most famous American Knife makers. The 102 is often given to children, but don't let the size fool you, it's slightly longer than the others in this post with the fixed blade.

This means it will take one hell of a beating, year after year. The stainless steel blade can get a bit dull with a lot of use and no TLC, but with proper, care these will last a lifetime.

One of my favorite features is the drop point and the tip of the blade-great for getting in little holes of a tree, wedging out a resistant fungus, or just clipping easy shrooms all day long.

After you're done cutting shrooms, you could easily use it to skin a whole deer--I have plenty of times. This is a multi-talented blade, and so much fun to wear I feel like a boy scout. Just pull your shirt over it when you go into the gas station.

This is definitely the honorable mention knife for this post. Not only are Higas small, and ultra-light, razor sharp and easy to sharpen as they're carbon steel, they flip open lightning fast after breaking in like a switch blade.

The only catch, is that means there is no safety. Even so, I've owned a couple of these and have never kept them anywhere but my pocket, and I've never cut myself.

I've found that I like to keep them in the thin coin pocket of a pair of jeans, which holds the knife straight up and down, with just enough clearance for me to be able to grab it easily from the pocket. Note the rust on mine, once again, carbon steel is wicked sharp, but needs regular attention. 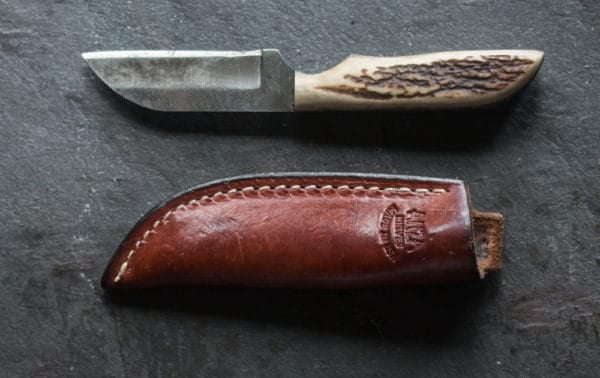 Hands-down, the strongest, abuse-loving knife here, Anza's are basically indestructible. The secret is that the knives are all carved out of steel files, that is, steel that's used to cut through other steel, like stainless. It also hold an edge like a carbon steel knife (because it is).

You'll feel the extra weight in this, and the slightly thicker blade can be overkill for small, casual mushrooming as "flexible" doesn't translate to above benefits, but the small knife model here is not bad, especially if you want something to double as a camp knife.

Heck, with a hammer, you could use an Anza to cut down small trees, or use it as a chisel. Sometimes I reach for it when I'm deboning animals or chiseling chaga. 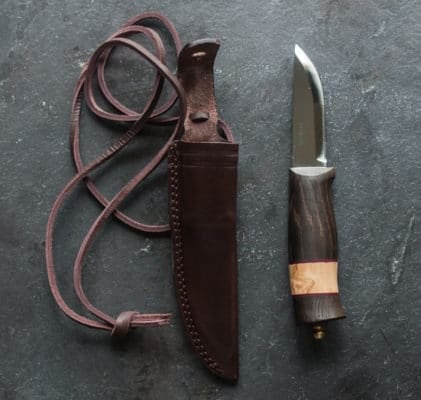 The ritzy one. Small enough to be a gift for a 12-year old, but ideal for small tasks, especially delicate mushrooming. To sweeten the deal, it's light as air, and at 60 grams, it's nearly as light as the 10$ Opinel, just with a sexy, minimalist Nordic handle and mirror-finished blade. Last, but not least, is the carry method.

In the United States it's not really a thing, but in Europe, especially in Scandinavia it's common to carry small knives in a sheath around your neck. It might sound weird but it's actually a really great way to carry hiking.

It tucks into a shirt quickly if I see civilians, and is all-around a luxury to use. The only tradeoff, if you could call it that, is that it shouldn't be abused like the Buck or Anza, but sometimes it ok to have nice things.

What you don't buy

All the knives pictured below I don't have pictures of, because they're not good enough to make a hotdog skewer.

The knives pictured below are all sold as "mushroom knives", but they all suffer from one or two annoying issues. Generally speaking here, all of the below probably have: blades that are too thick, they're ugly, handles that feel square and awkward, etc. I don't recommend them.