Thanksgiving is a good time for reflection, and this year I really enjoyed reading my friend Sean's article in the Times-an essay on Thanksgiving from an Indigenous perspective. It made me think of a lot of things, mostly about how unfortunate history has been for Native Americans.

It's not my place to weigh-in, but it resonated with me and reminded me I had an experience digesting something similar on my own last year, a part of the creative process for a dish I was making for a tasting menu.

While I was developing recipes, I was in the middle of reading two books on Native American cuisine side by side: Sean's The Souix Chef's Indigenous Kitchen, and Original Local, by Heid E. Erdich. Both books had some similarities, but differed greatly on how they regarded fry bread.

I never really thought too much about fry bread. I'd hear about it once in a while when I visit my grandparents in Arizona, and assumed it was a traditional Native American foodstuff, but didn't really give it more thought than that.

After reading the two books back to back, I learned fry bread is traditional, but at the same time, couldn't be farther from indigenous Native American food. Part of me didn't like it at all, since the main components of fry bread weren't part of any indigenous diet, but were ingredients forced upon Native Americans by the U.S. Government.

Sean sees fry bread as a representation of colonialism. In his cuisine, which only uses pre-colonial era food, i.e. cooking with turkey, rabbit and bison instead of chicken beef and pork, fry bread is shunned.

Erdich on the other hand, shares recipes for fry bread and presents it as a food in the Native American culinary lexicon, more or less. She also mentioned fry bread mixes briefly, and that some used to include timpsula.

If you're not familiar, timpsula, or prairie turnip (Psoralea esculenta) is a wild vegetable deeply associated with Native American Cuisine in the prairie regions.

Do a search for timpsula braids online and you'll see beautiful weavings of a tuber that grows in the Midwestern prairie, a traditional way to keep the dried storage organ during the off season. Sam Thayer wrote a really nice ode to the plant in his latest book Incredible Wild Edibles, suggesting people living in the plains consider replanting it.

What I thought of when I read the passages on timpsula in Erdich's book was a kind of sad anger at history. Thinking of people putting timpsula flour in fry bread mix made me feel uneasy. A small amount of powdered wild roots getting diluted by commodity flour and sugar seemed to parallel Native Culture itself, like few spoonfuls of purity being watered down in a 50lb sack.

It was the timpsula, and the charged feelings I felt about it's place in fry bread mixes that made me develop the beignets here as the final course for a dinner I was working on. I wanted to share the feelings I'd been digesting with the guests, but the last thing I wanted to do was trivialize or simplify the experiences I'd been reading about, or make fry bread.

Using sunchoke powder instead of timpsula

I didn't have timpsula (the braids are super expensive) but I did have sunchokes (also a tuber) I could process to flour. I didn't want to make frybread per-se as I thought it would be awkward, moslty I wanted to taste tuber powders and see how they worked in a dough.

I started to make doughs with a proportion of sunchoke flour to see how the results would pan out. The flavor just didn't come through like I wanted, but I did get some good advice online from friends who reccomended to toast the powder before baking with it. Toasting the flour was good, but I couldn't pack tons of sunchoke flavor in the dough without weakening the gluten structure that helps the dough trap carbon dioxide to rise and puff as it cooks.

Eventually I settled on a proportion, reconciling it with the fact that timpsula flour in a dough mix wouldn't taste like 100% timpsula either. Either way, you do get the flavor in the background, and it's great.

After a few trials, I found that simple beignets worked well, and were delicious tossed with powdered maple sugar and dipped in raspberry jam scented with Monarda didyma flowers.

Cut into rounds, the dough will souffle, and can be stuffed

The real surpise, was when I cut the dough into thinly rolled rounds instead of strips. Like magic, the fried rounds souffled, completely puffed and held their shape after frying. Now I was onto something, the hollow puffs could be stuffed and thats how I could fit the berry component into the dish (a nod to traditional wojapi) making it a self-contained, all-in-one bite.

I ended up getting two recipes out of one research project, the stuffed ones were the model I shared with guests for the tasting menu, and the more traditional beignets here  that are more casual and easy to reproduce. But in the end, I'm still chewing on much more than fried dough.

If you like sunchokes but want something easier, try my glazed sunchokes. 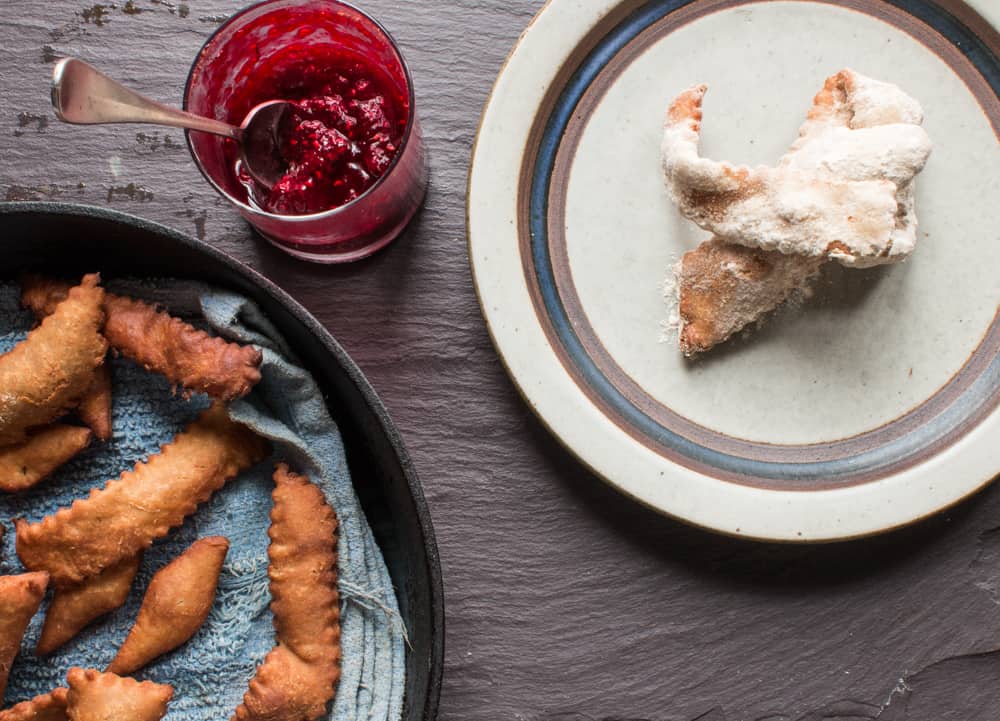 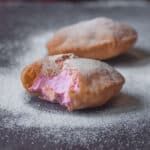 This makes a small batch-- enough to feed 5 adults as a snack depending on how they’re cut. Serve with some fruit preserves.

« Venison Tenderloin Crusted with Dried Morels
Storing Truffles with Eggs: Does it Work? »