If you hunt wild mushrooms, you probably know some of the flavor comparisons for well known species. Chicken of the woods taste like chicken, chanterelles smell like apricots, slippery jacks taste like viscous slugs (fresh at least), candy caps taste like maple syrup and hericium mushrooms cook a bit like crab (note that I said cooks, not distinctly tastes).

As far as the different species of hericium, from my experience: coralloides (coral shaped) americanum (multiple small tufts of teeth) and erinaceaus (one large furry clump) are all good, and I've picked them all in Minnesota, but I do like the asymetrical coral and americanum a little bit better than erinaceaus, just because. It should go without saying I also prefer wild hericium to cultivated, hands-down.

The little recipe here (almost silly to call it that since it's so easy) is just a play on the hericium/crab flavor comparison, and, just like real crab, a dip in butter with herbs and a little lemon never made anything suck. Less is more. Fried herbs are a sexy garnish to any fatty, buttery thing too, and come to think of it, a little pile of fried parsley would be just as good as the sage and oregano I have pictured here, it would add height and a crispy element too.

The jist: instead of browning the mushrooms like usual, which would add fat, you cook them with steam, and add the fat to the dish afterwords. The fat here, is drawn butter, which, technically is just clarified butter.

To be honest, I never understood why clarified butter served with shellfish was called drawn: maybe it refers to the butter being "drawn" with a ladle from a pot, or more likely in my opinion, the pure butter fat being drawn out and removed from the milk solids, which would give a cloudy appearance. I've worked at places where it could be either thing, but for me drawn butter refers to clarified/ghee.

Clarified butter has a bigh smoke point too, and for this recipe you need that, since the herbs are basically deep fried a bit, but not so much that they overcook, just enough to crisp them and perfume the butter.

Cooking whole butter with the milk solids will not give crispy herbs until after the milk solids have browned, which would then mean you have browned butter-not necessarily a bad thing either. After the mushrooms are steamed and the butter-infused, you put the mushrooms in a bowl and spoon some of the butter on top, then finish with a shot of lemon and some crunchy salt and the table: easy money. 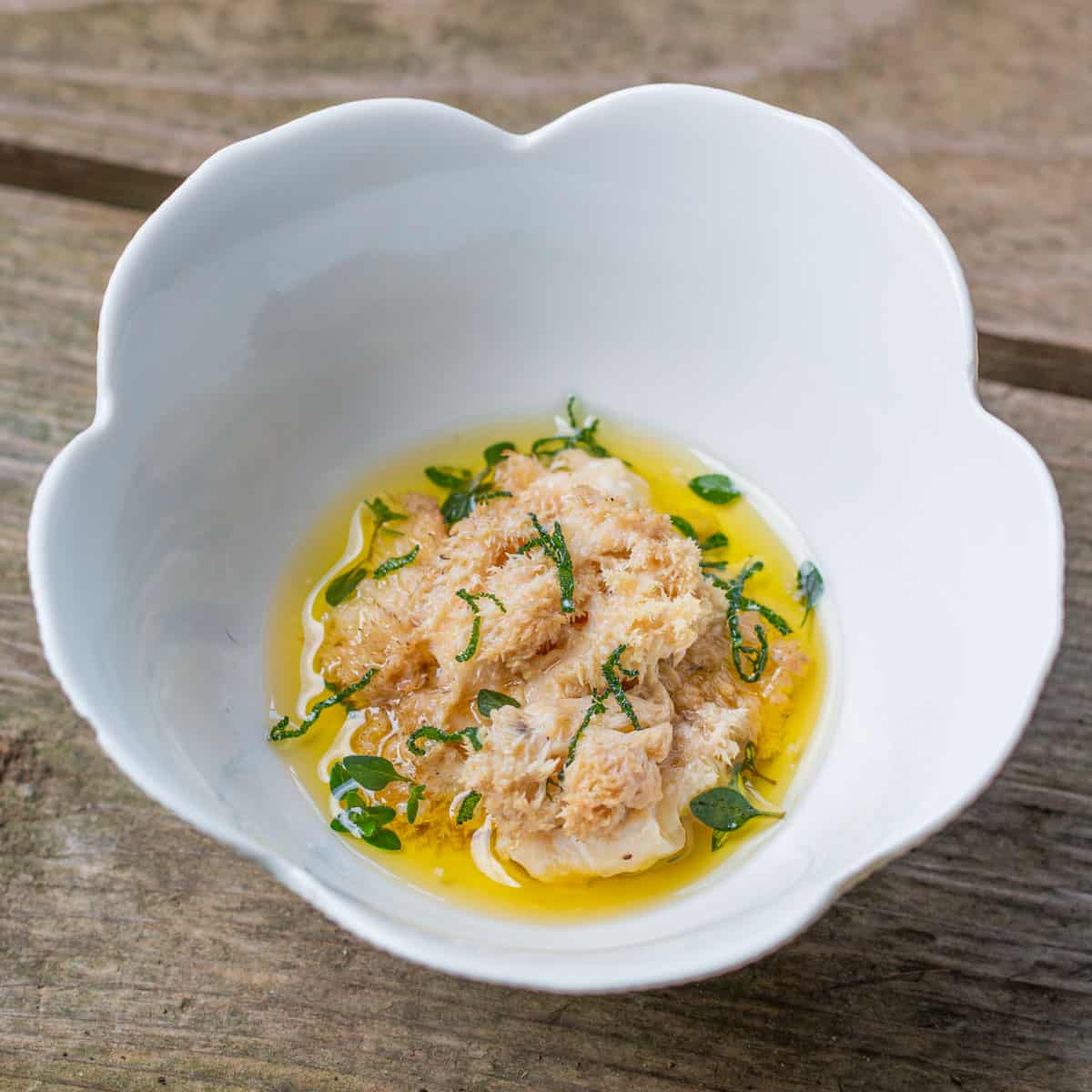 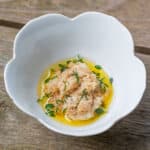 Steamed Hericiums with Butter and Herbs

Alternate Method with Browned butter  If the thought of discarding butter solids seems wasteful, you can always do this with browned butter. Warm the butter gently, until the solids start to brown and the butter smells like nuts. Scrape the bottom of the pan gently with a spoon to loosen the browned bits, you'll want those in the finished product to add flavor and perfume the butter. If you want to use the brown butter method, whole fried sage leaves are a great garnish. Alternate Method with Whole Fried Leaves of Herbs  Like I mentioned above, whole fried herbs would be a great garnish too, and they can be prepared in advance, as much as up to a few hours (some cooks will leave them out for days). whole leaves of Italian parsley and sage are the best for this, just cook them gently in the butter until crisp, then remove and drain on paper towels and store in a container until needed. The herbs can also be shallow-fried in a pan.
« Green Butternut Squash
Wild Grape Reduction »