Many recipes on this website are drawn from my study of wild food traditions from around the world. Sesame Baked Chicken of the Woods isn't. The recipe is from an old family cookbook my Grandma Phyllis put together-you know, the kind of homestyle, church basement arrangement of pages held with plastic bindings.

Sesame Baked Chicken was my family's all-time favorite way to eat chicken that my Grandma Gerri on my mother's side used to prepare, which she taught my mother to make, who would make it for me, and then my younger siblings after me, upon request, on special occasions.

If I close my eyes, I can still imagine opening up the door after playing outside as a child (or more likely, coming upstairs from playing video games in the basement) and having the ethereal fingers of scent pull me by my nose up to the kitchen.

The aroma of chicken coated with breadcrumbs and sesame seeds, the chicken's juices slowly mingling with the seed's oils creating a delicious crust of "griblets"  on the bottom of the pan family members would fight over, is probably the fondest scent memory I can think of from my childhood.

Fun story (and glimpse back to a more relaxed era), one of my favorite times I can remember eating Sesame Baked Chicken was when I was in Second Grade. My teacher at the time (shout out to Mrs. Stoeberl!) held a reading competition in our class.

The grand prize was plucked from a child's dream: the winner got to go to the teacher's house for an evening, where she made your favorite recipe for dinner. 30 years later, this sort of thing wouldn't fly.

I mean, you're not going to know your teachers address, let alone go to their house to share a meal. Not in a million years. Back in 1992, things were a bit simpler I guess.

The recipe's really simple. You take some chicken (the original recipe calls for bone-in chicken) dip them in evaporated milk, roll it in a mixture of sesame seeds and breadcrumbs and bake until it's golden brown and delicious. For the version here, I made a few changes I think even my family will appreciate.

I don't often use evaporated milk as in the original recipe, but I do make a lot of crème fraîche (you can use sour cream) and the gentle tang it imparts is a welcome compliment to the rich crust of breadcrumbs and seeds the same way it works with fried chicken.

To layer extra flavors, I mix some dried ramp leaves into the sour cream. You can use some onion powder if you want, but don't reach for garlic powder, or even worse, the awful stuff known as granulated garlic-it's way to powerful for my taste, and comes off tasting synthetic and overly-strong.

From there, the recipe is basically the same: dip the chicken of the woods into the sour cream batter, dredge in the breadcrumb-seed mix, and bake until crisp and golden. With a little green salad or your favorite veggies alongside, it's the sort of thing memories are made of. 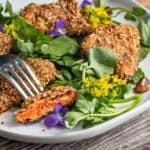 Notes
This should bread one pound of mushrooms, but you will have sour cream mix leftover. You can easily scale the recipe up for larger batches, taking into account you’ll probably go through sesame mix faster than the sour cream batter.

Chicken of the Woods