Huazontles (What-Zohnt-Lays). The word just sounds interesting. The name is dense, filled with far more than you’d expect from a word used to describe what’s basically a rustic plant dumpling stuffed with cheese.

The name huazontle itself is an ancient one, derived from the Indigenous South American Nahuatl language, meaning it pre-dates Spanish colonization, by how long isn't clear, but a few thousand years is definitely within the realm of possibility.

Huazontles (like a few other things around the world I've been collecting for a new speech) is a perfect example of what I've been calling a "polynoun"-a word used to describe multiple things in cultural culinary lexicon. In this case, the name can refer to a specific plant (Chenopodium nuttalliae) a specific part of the plant used for food (unripe flowers in this case) as well as numerous traditional dishes made from different parts of the plant.

To begin to appreciate huazontles in all their glory, to really appreciate them, it’s probably helpful to consider the Aztecs and indigenous peoples of Mexico for a minute, whose cultivation of different chenopods (amaranth, lambs quarters etc) as food plants is well known.

Just like other cultures around the world, ancient growers may have noticed the occasional variations of plants they liked and gathered seeds of good performers or anomalies to get more of what they wanted, like one plant that grew larger than its bothers and sisters, for example.

This could be the case with Chenopodium nuttalliae, a large variety of lamb's quarters known colloquially across Mexico as huazontles (huauhzontle, huanzontle, guausoncle and Aztec spinach are synomyms). Chenopodium quinoa seems to be a close relative, and there's been speculation that the two could have come from a single, ancestral South American plant.

C. nuttalliae (and presumably other lambs quarters that grow to a large size) may have offered larger edible leafy greens than smaller plants, but their size also yields a additional harvest: the unripe round seed heads, which look a little like broccoli on a stick.

The unripe greens flowers are present on other, more common lambs quarters too, but their smaller size, at least in my opinion, makes harvesting them slightly less efficient for people interested in eating them. With a good patch of your local, common lamb's quarters, it’s possible to gather the green flowers in some volume, but I haven’t done it myself.

A casual google (or even better, a search on You Tube for dumpling-making Abuelitas) will quickly bring up a bunch of videos and articles from Mexico (link to my favorite Abuelita from De mi Rancho a tu Cocina at the bottom of the page). One thing's for sure: Huazontles are a very traditional food.

About now, you’re probably understanding where the milkweed buds come into play here. I don’t have C. nuttalliae near me (Hank Shaw grows it, of course) but milkweed buds are legion, and their shape and size is about as close a substitute to huazontle flowers as I can think of, if a bit larger. The fact that they’re delicious and mild tasting doesn’t hurt at all.

The dumplings are pretty simple to make. Steam or blanch some milkweed flower buds, chop them, mix with an egg yolk or two to help them form, mush them up into a little rustic shape, with a nugget of cheese inside.

After forming, the huazontles are rolled in flour, dipped in whipped egg white (a la chile rillenos) browned, and simmered in a delicious, silky, slightly spicy sauce made from dried chilies. While some recipes don't include the chili sauce, I definitely recommend it. Getting to channel your inner Abuelita is just a bonus. 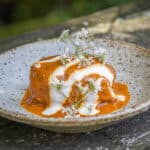 Mexican-style dumplings made from milkweed buds, stuffed with cheese and simmered in a rich dried chili sauce inspired by the traditional dish made from green lamb's quarter seeds. Makes approximately 7 huazontles. Feel free to make them smaller or larger if you like. They're a great project for the whole family to participate in.
Prep Time30 mins
Cook Time30 mins
Course: Appetizer, Main Course
Cuisine: Mexican
Keyword: Huazontle, Lamb's Quarters
Servings: 4

Chili Sauce The chili sauce will make a little more than you need as it's difficult to make a smaller batch than I share here. It's good on all kinds of things. Timid palettes  Pasillas are typically less spicy than guajillos, so don't be scared of them if you can't do spicy food. You can always cut the sauce by pureeing a roasted bell pepper into it instead of half the dried chilis, too.