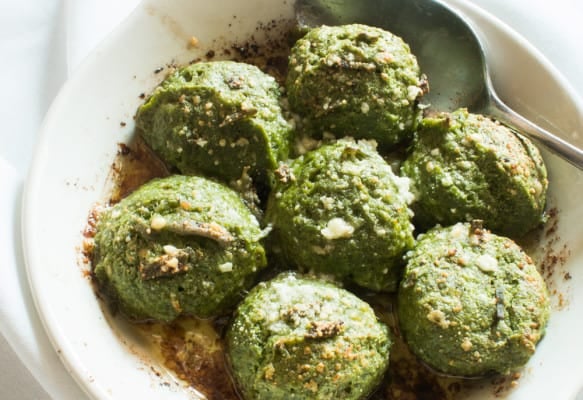 Where the hell did all this cream cheese come from?!

Maybe someone forgot to check something off the list they ordered, maybe someone hit a wrong button, maybe the driver was new and he had no idea that the regular par was cut in half for the week--I've seen it all.

After the person doing the ordering (typically a sous chef) gets a reprimand and a print out of the food cost if it was something big, like a couple cases of steaks or a box of vanilla beans, the new puzzle at hand becomes what to do with the excess product.

You know where this is going. One week during the spring at St. Pauls Heartland where the other cooks and I wrote a new menu every day, we wound up with a with what you would call a metric shit ton of cream cheese. Without being able to return the product, cream cheese festival got underway. There was cheesecake, dips and spreads, stuffings, and, dumplings.

I'd made plenty of dumplings out of ricotta before (see true gnudi, the cousin of these dumplings over in this post) but when one of the prep cooks showed up on my station with a bunch of batter and starting painfully quenelle-ing (making an egg shape with two spoons) batter to poach for dumplings on my vegetarian tasting menu, I learned a new thing. Lots of different, soft cheeses can be worked with a touch of egg and flour to make a great, tender dumpling (quark, marscapone, and labneh, to name a few). 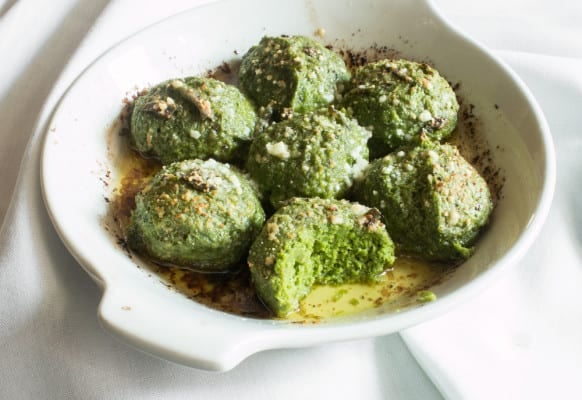 These ramp leaf dumplings are a little different in that they're a deep sylvan green and powerfully (but not offensively) rampy, where most dumplings I see like this might just have herbs mixed into them, since chunks of greens can make the delicate dumplings cook unevenly, and, even fall apart if the pieces are too big.

If I remember correctly my goal at the time (and a yearly spring tradition) was to use them for an all-green, spring study-of-monochrome sort of vegetarian entree. In the summer and other seasons, I'd do similar themes with plates here and there: red and yellow in summer, golds and oranges and blacks in fall--you get the idea. The dance partners would change throughout the week depending on availability.

One day it might be a juicy stew of fiddleheads, asparagus and hop shoots in a wine sauce, the next day it could be mushrooms, brown butter, nettles and sage, and so on and so forth. In your kitchen, you can serve them with whatever, but remember, less is more, and simply baked with sage butter and parmesan as I have pictured here for a side dish, is a tried and true classic that won't fail you. That being said, feel free to add some roasted mushrooms if you have them.

Instead of using cream cheese, like original dumplings we made to get through excess product, the ramp leaf dumplings use chevre. Soft chevre is just so versatile, I'd be hard-pressed to find something it wouldn't improve, especially the world-class chevre from Donnay Dairy that I would drive across the state to get during the season.

The gentle tart/sour of the chevre is a perfect foil for the rich ramp leaves, and it's slightly heavier weight on the palette makes for dumplings that eat like a meal. Decadently rampy comes to mind. 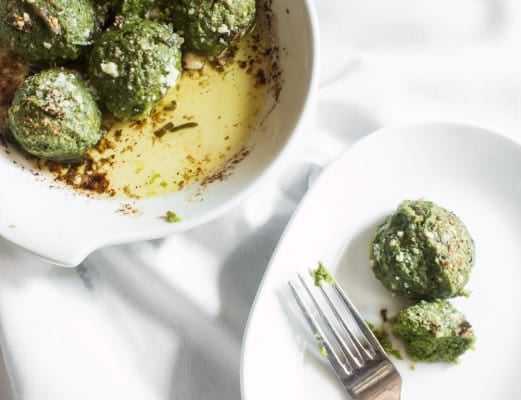 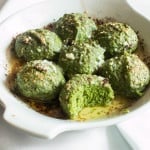 To serve the dumplings per the photograph, put the dumplings in wide, shallow baking dish, then melt the butter in a saute pan and cook until browned and aromatic. Add a teaspoon of sliced fresh sage, then deglaze the pan with ¼ cup of dry white wine. Drizzle the sage butter over the dumplings, sprinkle with parmesan, and bake at 350 for 10-15 minutes or until hot throughout.