Gomphus clavatus are an increasingly rare edible mushroom also known as the violet chanterelle, the pig ear, and likely a bunch of different cultural specific names I don't know of yet. These pictured in the recipe are actually a rare version of Gomphus clavatus that grows with hardwoods as opposed to pine, currently called pseudocraterllus pseudoclavatus, but they can be used interchangeably, as could other chunky mushrooms like lobsters or milk caps, like the voluminous milky (L. volemus), saffron milkcaps (L. deliciosus), or indigo milkcaps (L. indigo).

In Mexico, especially in cool, forested, coastal areas like the Mihoacan, mushrooms are often cooked and eaten with tortillas. My version here is super minimal, and not traditional, but it's a nod to the tradition of mushroom tacos, although typically they would be stewed, boiled, and pounded with garlic and herbs to make a sort of meat substitute, especially with lobster mushrooms. 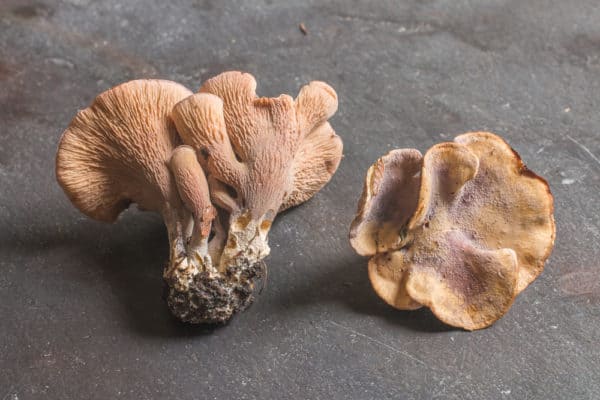 This method is simple for any gringo to make, and, I guarantee you, even if your family doesn't like tacos, or mushrooms, they'll like these, well, maybe without the cilantro, since dislike of those things can unfortunately go hand in hand.

The secret is in the tacos. I'm using flour tortillas here, near heresy in the middle of the movement for artisanal, heirloom corn tortillas, made by hand. Basically, I was craving some of the chewy tacos I used to make on West 7th in St. Paul. They're trashy white man tacos, but man are they good.

There's a certain magic that happens when you deep fry glutinous tacos, they get soft, chewy, and addictive. Honestly you could put anything in a deep fried flour tortilla shell and it would be delicious. I also used to just eat the fried tortillas like pita bread, dipped whatever's in arm's reach when it was taco night at the shitty bar and grill I learned this trick from.

The specific ingredients here are just examples of what I had on hand, but the idea here is to let the mushrooms shine, which is why they're not cooked down into a spoon-able mass. I simply cooked and seasoned them on the dirty fried tortilla slicked with mayonnaise (more traditional than you might think), a touch of quick, spicy salsa, and a couple edible flowers. No cheese with this one. 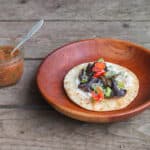