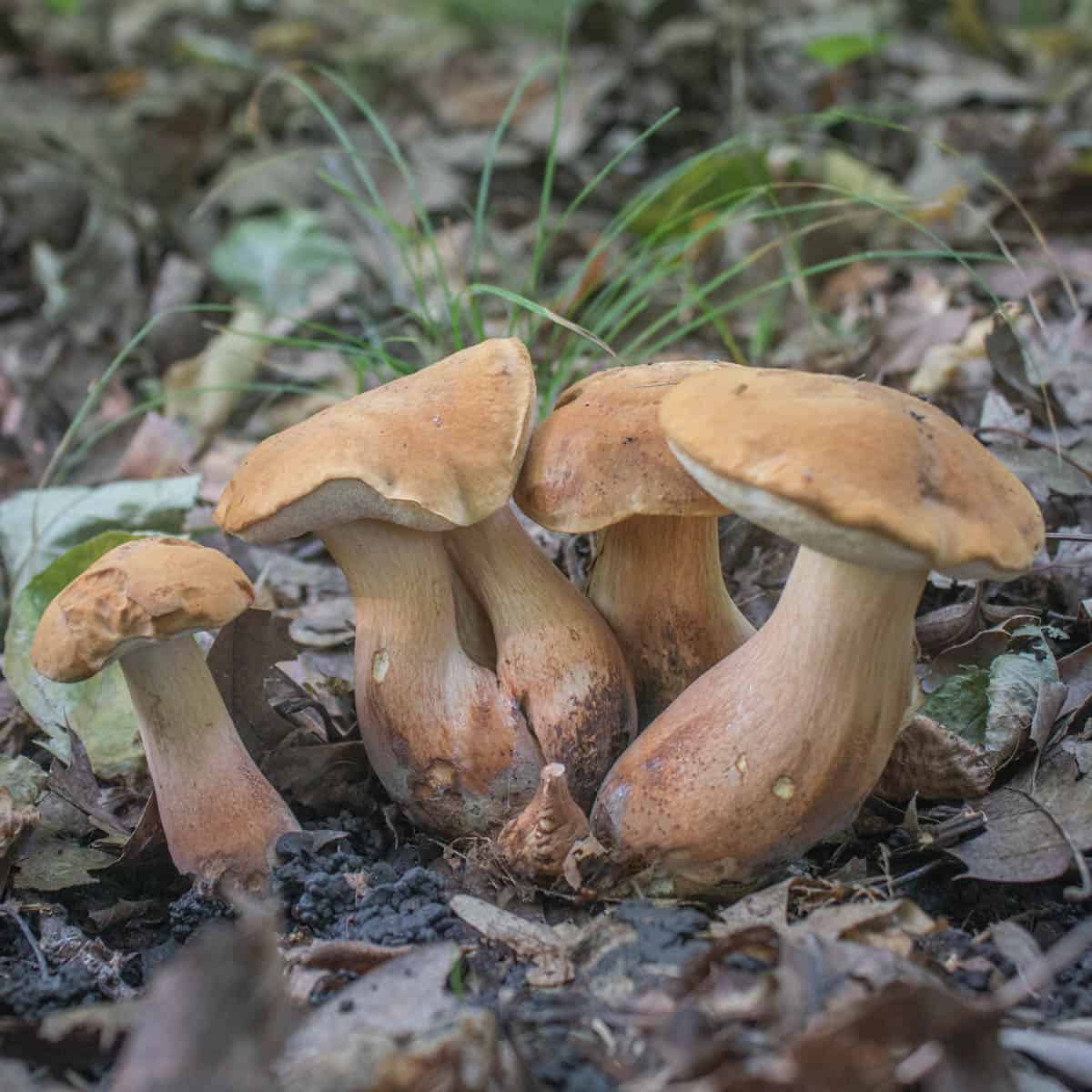 Is a typical summer scenario after a heavy rainfall. The heart of bolete season, in the middle of Summer in the Midwest, is *the* fairy tale mushroom season for me, with fungal scenes all over the place, each one something you could make a project out of in a viewfinder, or a mushroom-loving nativity scene.

If I’m lucky, they’ll be a species I know, and I’ll get them nice and young, but, more often than not, I find giant, showy fruitings of mature mushrooms, a big one here, a bigger one there, troops and lines weaving through whatever tree partner they’re growing with. They seem to almost ooze from the Earth, spreading out over the hills, ravines, or spilling outside of the woods, threatening to break free from whatever natural boundary they’re supposed to know.

Sometimes I luck out, and I’m in a spot where I know the fleshy, pored mushrooms. More often than not, especially in one particular place, I’ve probably run into a flush of Tylopilus, and I won’t bother to even taste and spit out a piece of the cap, since they’re a bitter species I see, over and over again.

Yeah, bitter mushrooms are part of nature, doing job, etc, etc. It gets annoying though, as a lot of the Tylopilus are attractive: brightly colored in purple, rich red and maroons, or snow white with shades of grey. Adding insult to injury is that they’re often heavy like paperwieghts, just like the best porcini. And, of course, if you cut into those Tylopilus, more often than not they’re 100% bug free, not a trace of holes or tunneling. The fact remains that they’re bitter though, and I won’t be eating them.

Note how the caps change as they age. It’s always good to get young and older specimens of anything you’re unsure of. Can you see the slightly pink hue to the cut stems? It’s faint, but it’s there.

“Bitter” mushroom flavor isn’t a taste you forget. The first local “porcini” I ever tasted were brought into a restaraurant I was at by a hunter who bought himself a plane for the sole purpose of hunting and selling mushrooms. What he brought weren’t porcini though, they were bitter, mouth-drying and powerfully astringent. Back then I admired the guy, (Leo was his name) and I thought nature must’ve dealt him some kind of bum hand with that delivery.

Needless to say, chef was pissed, to say the least, and I didn’t exactly understand why, but I did a couple years later after I started picking boletes myselfThe jist is, if you buy a plane, just for hunting mushrooms, and bring a restaurant piles of bitter boletes without having picked them before from the area, or without so much as nibbling a cap to safely test for bitterness, you’re the type of bullshit artist-hack that gives foragers a bad name.

If you want to make money selling mushrooms (you won’t) you’d better know what they are, or at least that they’re safe, and, hopefully decent tasting. What the hunter sold us were probably Tylopilus felleus, the false porcini, or a close relative. Whatever they were, the fact remains it was a damning, rookie mistake. 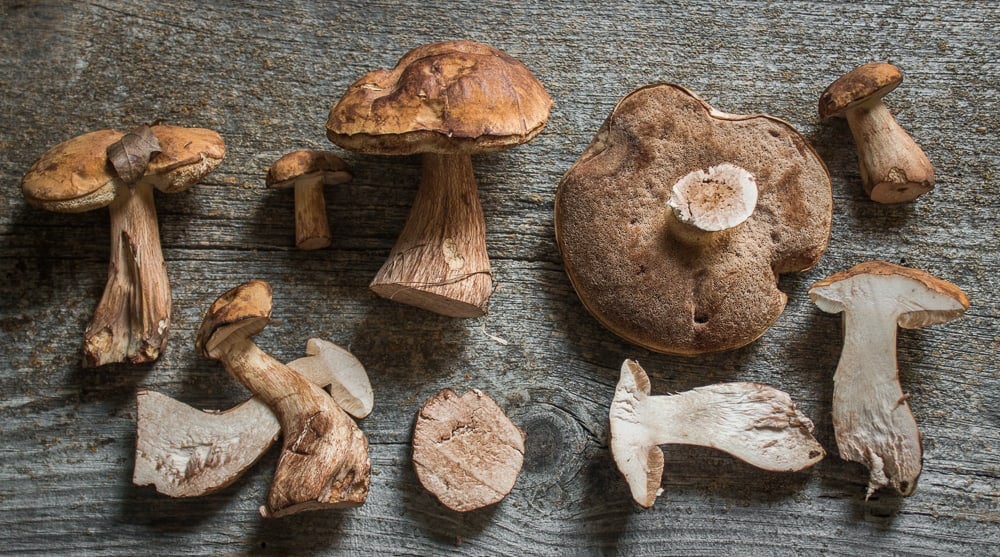 Felleus has earned it’s share of cursewords and softball-lobs into the woods from me as much as the next mushroom hunter, but for a number of years now I’ve been keeping my eye out specifically for Tylopilus alboater, or the black velvet bolete.

I haven’t seen any reports of T. alboater in Minnesota or the nearby surrounding states, so I’ve basically given up hope of them, but, that doesn’t mean I can’t go visit some of my foraging friends on the East Coast. What I didn’t know, was that there were other, edible Tylopilus besides them, but then again, I never really looked, because, porcini. Here’s some I’ve been working on over the Winter. 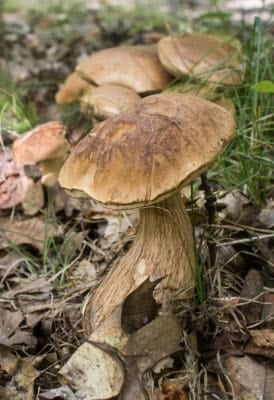 I was in a stand of mixed oak woods, a few maple, an aspen here and there, but mostly oak. I was about to call it quits for the day, when I see a few clumps of mushrooms along the path. I bend down, suspecting bitter Tylopilus, but, as they weren’t bright colored Tylopilus I knew to be bitter, I cut a piece off of the cap to nibble and spit out. It was pleasant, mushroomy, not bitter at all. The only problem was, I was expecting bitter, now, I had no idea what I was looking at.

I suspected I might be able to eat them, so I brought some home, cooked a few small amounts raw, and dried the rest to see if drying would work magic on their flavor like it does various Leccinum mushrooms I like to pick.

Well, winter’s given me plenty of time to look them up (as well as argue with myself). Finally, I know what they are, and by that I mean I’m pretty sure they’re one of two species, or maybe three, or possibly four.

Ok, I may not know exactly know what they are, but at this point, It’s almost like comparing different species of apples, as the worst thing could happen is that they would taste bitter, and I already knew that wasn’t the case.

The biggest tell for me personally that an unknown bolete is probably in the Tylopilus family, is the presence of pink color in the pores, although there’s exceptions, of course. Aside from that, these pictured have a light brown-ish, pinkish spore print. Fresh, the flesh was soft, and not as heavy as many other Tylopilus. Unfortunately, none of those help narrow down what they are too much, aside from the fact they’re definitely not T. felleus as they’re not bitter.

The presence of reticulation was useful here in trying to separate out my mushrooms from one of the above species. The Tylopilus pictured here have reticulation (a net pattern) that concentrates at the top of where the stem meats the cap, but is absent at the bottom of the stem, especially young, which would rule out one very similar cousin: Tylopilus variobrunneus, who should have reticulation over the entire stem. 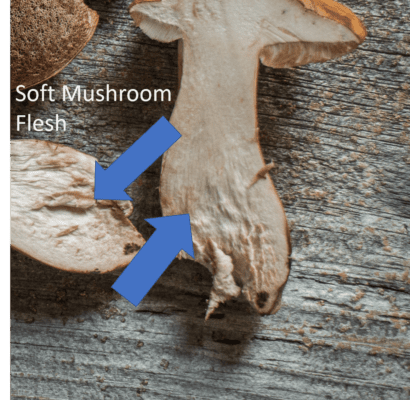 Soft mushroom flesh where my knife had trouble getting through. This is was different from other hard, heavy Tylopilus 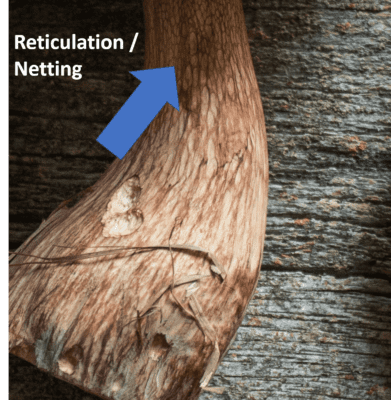 Reticulate pattern concentrating on the upper portion of the stem . 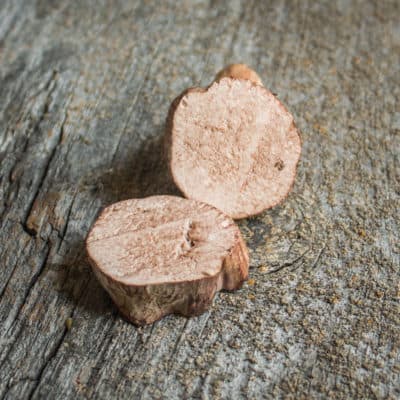 Note the pink hue to the flesh after cutting. 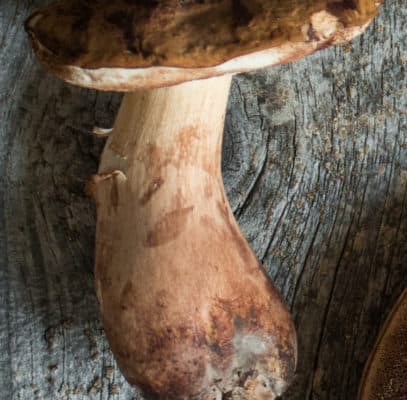 Gentle staining from handling. This one has only the faintest reticulation too, and almost appears smooth at first glance.

With the lack of maroon-purple color seeming to rule out T. badiceps, now it seemed like it’s between Tylopilus indecisus, and ferrugineaus. Really, the only differences I can find between the two, are that ferrugineaus can have a swollen-looking stem that can be club shaped and doesn’t seem even, where as indecisus has a less variable stem, that is white-ish when young.

The kicker may be that my collection pictured were light-weight, as far as boletes go too, almost spongy, or styrofoamy, another thing noted by Micheal Kuo that would put these in indecisus (refer to photo above, too), but I can’t say for certain. David Arora’s Mushrooms Demystified was good to look at too, as was Bessette’s Boletes of North America. 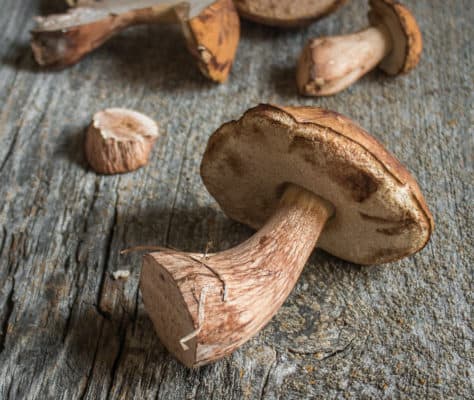 Note the staining on the pores. Pink eventually fades to brown.

They look a little like porcini, but, don’t expect them to taste like them. These are a mild tasting bolete, not bitter, not incredibly delicious or noteworthy, just very mild. One thing did stand apart though, and that was a slightly sweet taste, which someone told me anecdotally Gary Lincoff enjoyed over typical porcini. 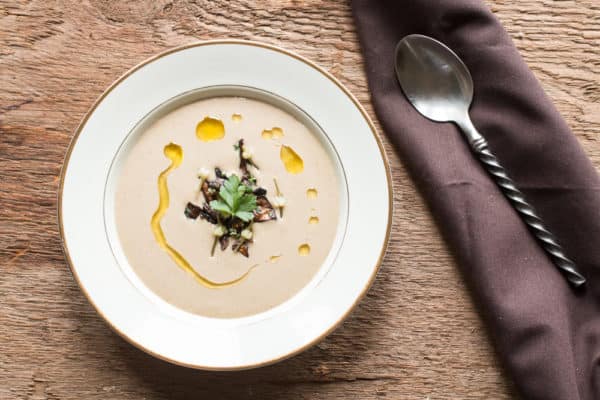 A bisque of traditional wild rice and a blend of dried mushrooms. These Tylopilus made great, slighty sweet chips for a garnish.

In my mind, the mild taste of these, along with others like, say, Boletus pallidus or Leccinum subglabripes near me, will be good in blends, or mixed with others to round out their flavor. The best thing I found to do with them, if I wanted to taste the flavor alone, was to rehydrate, drain and squeeze them dry, then toast in a pan with a little oil until they get crisp, a bit like chips, that afterwords, you could use to garinsh different things. I also used a good amount of them in a blend for wild rice and wild mushroom soup, as well as for the mushroom garnish.